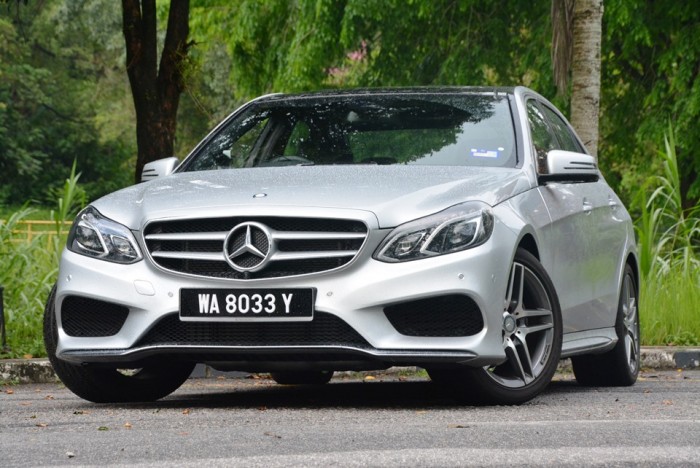 Whilst the S-Class is where the most sophisticated technologies developed by Mercedes-Benz often go to first, the mid-range E-Class is perhaps the truer embodiment of the brand’s core values. Tracing its roots back to the W136 of 1947, Mercedes’ mid-sizer officially adopted the E-Class moniker only as recently as the W124 two decades ago. Previously, they were known, depending on their engine capacity, as the 230 E, 300 E, and so on with ‘E’ being the shorthand of the German word for ‘injection’.

Besides symbolizing luxury, Mercedes-Benz E-Class models were renowned for their glorious over-engineering and unrivaled quality. British television show Fifth Gear famously tested an example of the W124 to destruction, requiring the combination of a baseball bat, rough roads, flood water, a monster truck, and a round of artillery before the car was finally knocked out of commission. 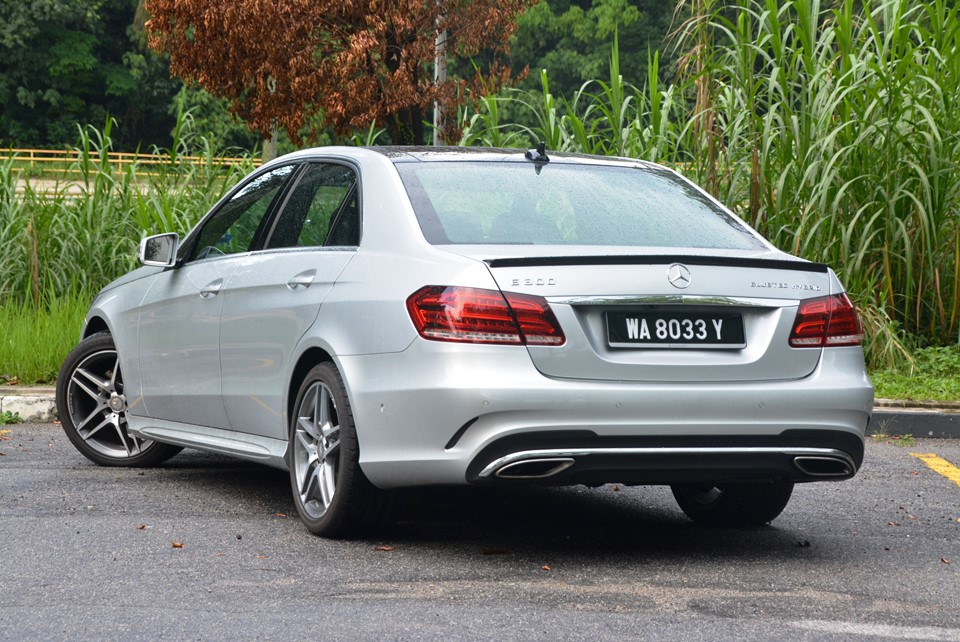 After the W124, Mercedes learned about optimization and tried to save a few bucks when engineering the W210 and W211 that followed. The results were E-Class models that were still okay, but not convincingly bullet-proof the way the W124 felt. At the same time, BMW cranked up the pressure with two excellent generations of the 5 Series, namely the E39 and E60; the general consensus was that the E-Class had become second-best in the segment.

The current-generation W212 model sees Mercedes-Benz going back to basics and give us what is, without doubt, the best E-Class to date since the W124 was pensioned off in 1995. Launched in 2009, the W212 went back to the nameplate’s core values and made the E-Class genuinely competitive once again. The range was extensively facelifted in 2013 and this year, the line-up welcomed an intriguing addition, namely the E 300 BlueTec Hybrid that is the subject of our review today. 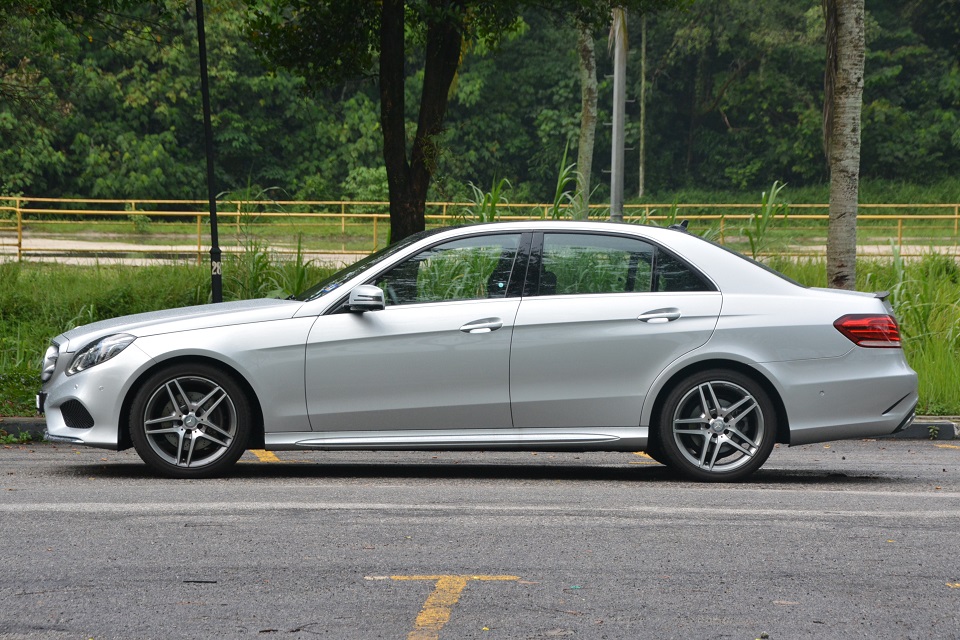 Thanks to energy efficient vehicle (EEV) incentives, in which the E 300 Hybrid is fully exempted from duties until at least 31 December 2015, Mercedes-Benz can put one of these on the road for you at RM338,888 before insurance.

You can get the Audi A6 for less money in base-spec 1.8-litre format, but if you want a 5 Series at that price, you’ll need to speak to your BMW dealer for a pre-registered unit. In contrast, the E 300 at the quoted price is not only a brand new vehicle, but one that is fully kitted with the AMG Sports package. 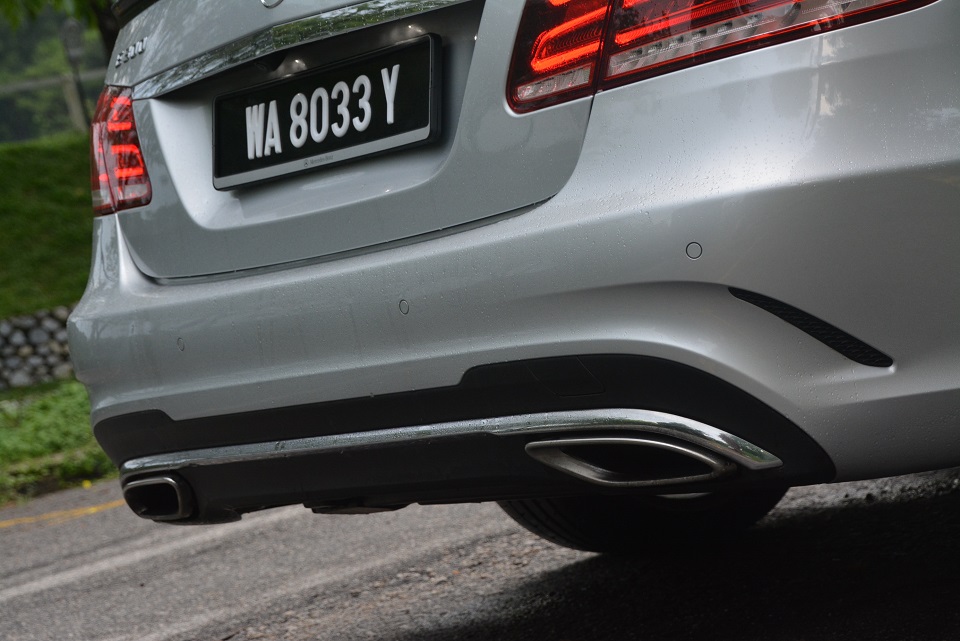 Because it is the only variant of the E-Class range to receive duty exemption, the 300’s model positioning is also somewhat unique. It is the most affordable E-Class, being a full RM26k more affordable than the supposed entry model, the E 200. Performance-wise, it slots between the E 250 and E 400.

Freed from the burden of having to pay tax, Mercedes went to town in speccing the E 300’s equipment manifest. In addition to the aforementioned AMG Sports pack, the E 300 comes fitted with active park assist, 360-degree parking camera, rear seat entertainment, keyless entry, and panoramic sunroof. In short, it gets the most amount of equipment among regular E-Class variants offered in Malaysia. 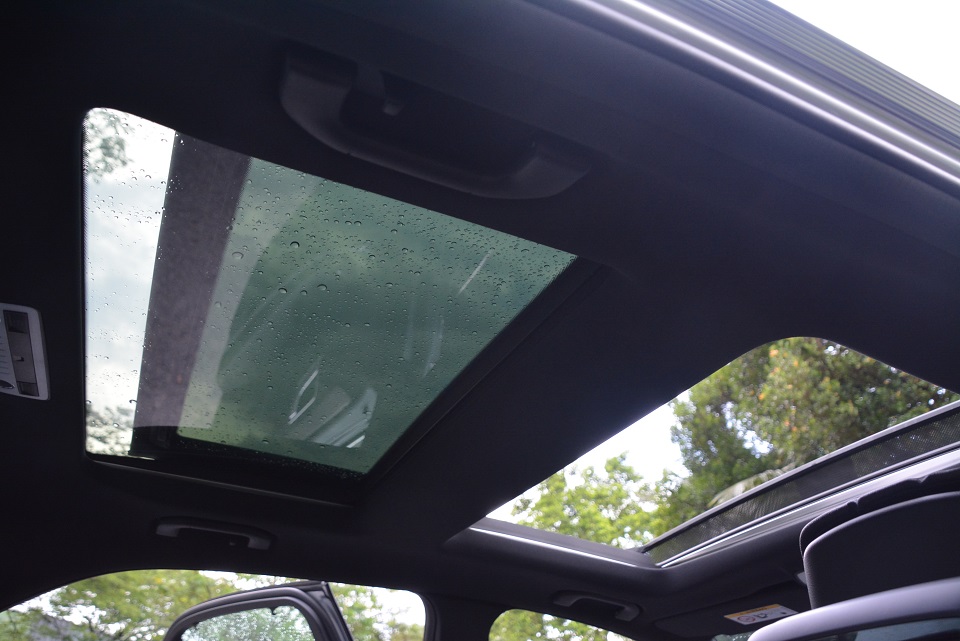 The E 300 tested here, on the other hand, is a combination of two fuel-saving ideologies into one powertrain setup; the inherent parsimonious economy of its 2.1-litre OM651 turbodiesel enhanced by a three-phase AC motor mounted within the casing of its 7G-Tronic automatic transmission. The diesel mill’s 204hp/500Nm contribution to the cause is complemented by an additional 27hp from the electric motor. 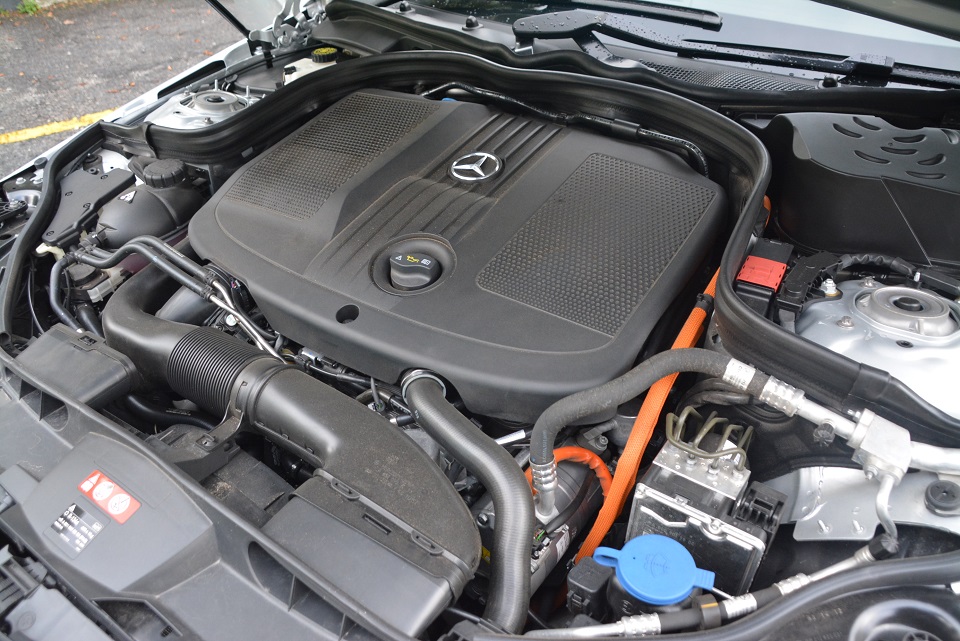 Like all luxury cars, there is the possibility that you might be able to pick up a grey import E 300 BlueTec Hybrid in the future. In case such an idea crossed your thoughts, we should inform you that the E 300s sold in Malaysia are specially specced and prepared for our climate and Euro 2 fuel. Be mindful of that if you put your money down on a parallel-imported E 300 BlueTec, which will come with a Euro 6 engine that may not take too kindly to our fuel, even the recently-upgraded Euro 5M grade.

Claimed performance figures from Mercedes-Benz read 7.1 seconds for the century dash and 242kph for its V-max. Fuel economy is rated at 4.1 l/100km in the combined cycle, translating to a theoretical cruising range of 1,950km in ideal conditions. In the real world, Autocar UK’s Andrew Frankel managed 1,968km in a European spec unit without refueling; closer to home, we took one of these from KL to Bangkok with plenty left to spare. Both drives are accomplished with 80-litre fuel tanks which are standard fitment in Malaysia but offered as an optional extra in certain markets. 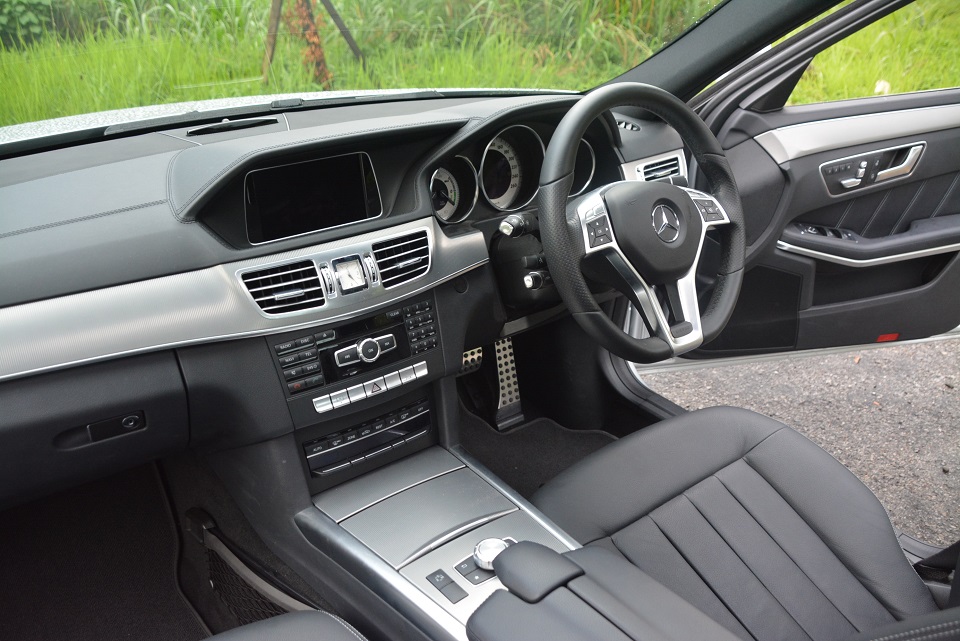 After two generations of the rounded four-eyed look of the W210 and W211, Mercedes-Benz thoroughly revamped the E-Class with a boxier and more angular appearance when launching the W212 in 2009. Four years later in 2013, the mid-life facelift rolled out with another round of drastic revisions.

Whilst the mechanical platform remained largely unchanged, alterations made to the vehicle’s appearance are far from what we would call subtle. New tail lights and bumpers are par for the course, but more significant is a return to the single headlamp configuration for the first time since the legendary W124. Unusually for a facelift, Mercedes also resculpted some parts of the sheet metal. The bulging rear wheel arch that was meant to pay tribute to the old 1953 Pontoon has been smoothed over.

For Malaysia, all E-Class variants come with the sportier Avantgarde grille that give the vehicle a bolder fascia, although the trade-off for old-timer Mercedes-Benz aficionados is the absence of the free-standing three-pointed star at the edge of the bonnet. It is perhaps reflective of a desire on Mercedes’ part to attract a portfolio of clientele that is wider than the Chinese towkay demographic that the brand is usually associated with in our part of the world. 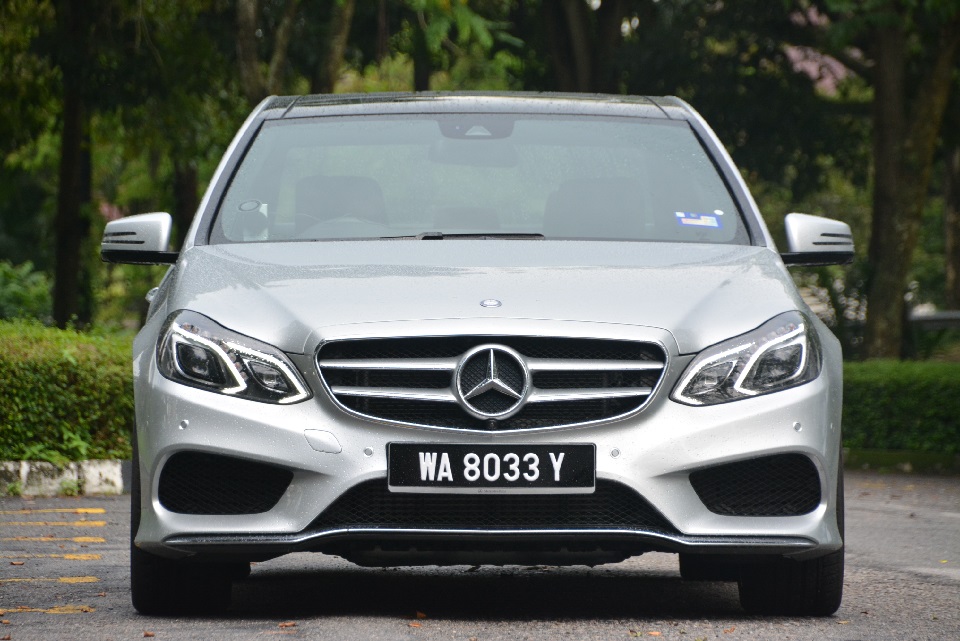 Considering its age, the E-Class’ cabin unsurprisingly feels dated compared to the beautifully-crafted interiors the of C- and S-Classes, both of which admittedly undergone full model changes within the last two years.

The button-laden centre-stack, in particular, look cluttered by today’s standards but in terms of quality, be it material selection or fit and finish, the E-Class remains top rate and competitive within the segment. In any case, there is absolutely no reason to doubt the longevity of an E-Class; do bear in mind that unlike the 5 Series or A6, the E-Class is also engineered to survive the harsh existence of serving in taxi fleets.

Space is available in abundance in the E-Class, be it for your passengers or your cargo. Notably, the E 300’s boot loses only 35 litres of its boot volume over that of a regular variant, leaving a very capacious 505 litres at your disposal. Contrast this with the 375 litres available in the Audi A6 Hybrid and BMW ActiveHybrid 5, you are paying a very minimal space penalty for the extra bulk of the Benz’s hybrid system. 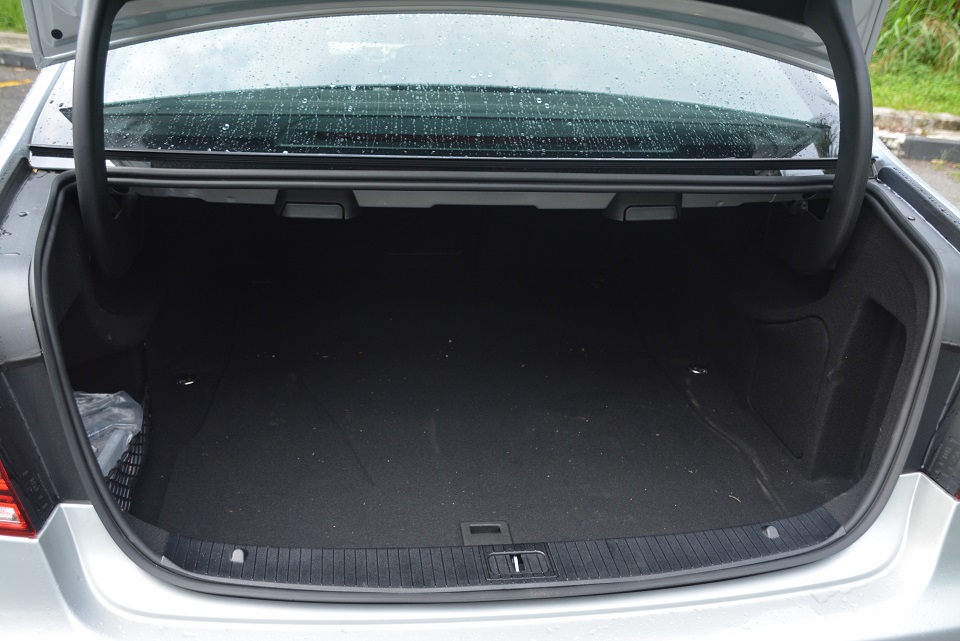 It may come dressed with an AMG Sports pack, but if you’re expecting a thoroughly sporting driving experience, you’re approaching the E 300 BlueTec Hybrid with wrong priorities. The kind of agility and composure around bends that come naturally to a 5 Series simply isn’t present here, with the chassis making no effort to disguise the vehicle’s portly 1,845kg kerb weight.

Whilst we enjoy hustling a car around corners as much as the next person, spirited driving does not play to the E 300’s strengths. In any case, if enthusiastic cornering is your priority, a diesel-powered hybrid vehicle should not have figured prominently in your shopping list. There is, of course, an acceptable pay-off for that compromise in its dynamic sharpness, and it comes in the form of a truly supple ride – a quality which the chassis engineers have sensibly prioritized for the benefit of its larger clientele. 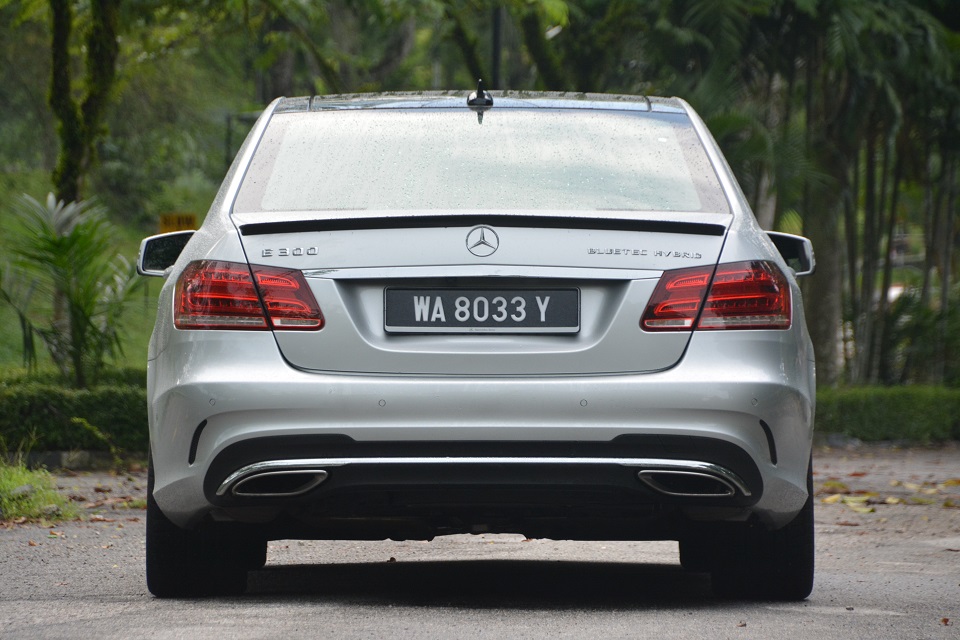 Nevertheless, despite not being rich with sheer mechanical grip, the chassis is adequately communicative and transparent with its intentions. You never have to operate on guess work, and there is plenty of warning before you even approach the limits. For a car that aspires to provide effortless comfort first, such a setup is perhaps preferable as opposed to one that is too darty and excitable.

The E 300’s motor is just about powerful enough to sustain it on electric-only motion for brief spurts, but as we discovered during our lengthy KL-Bangkok drive, this particular facility is best reserved for traffic jams, strolling the parking lots, and also to take the load off the engine during a standing-start. A coasting function is built into the system to help further save fuel, but if you’re looking to sustain cruising momentum over a long distance, you should keep the diesel engine ticking over gently.

Overall smoothness and sophistication of the system is second-rate perhaps to Toyota’s patented Hybrid Synergy Drive setup. Merc’s all-electric mode, for example, is more limited in its scope than Toyota’s, but transitions between drive modes are smooth enough not to disturb the cabin’s serenity, and actually excellent in the context of a diesel combustion engine. It’s also worth restating that components of the Benz’s hybrid system occupy significantly less space than comparable setups in the market. All-in, we say it all adds up to a reasonable compromise in terms of performance, economy, and space usability. 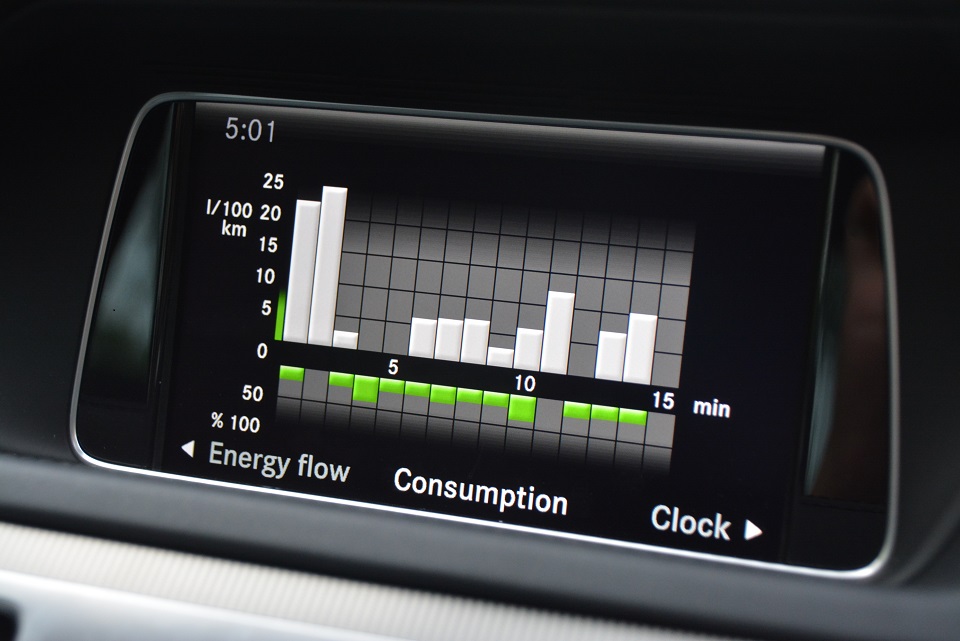 With the next-generation W213 E-Class set to make its global debut at next year’s Detroit Auto Show, the W212 is currently in the final legs of its model life-cycle. Still, it does not detract from the fact that after less than impressive outings with the W210 and W211 E-Classes, this is a very welcomed return to form for Mercedes-Benz. If you don’t see the need to wait an extra year for your brand new E-Class, the current one will hardly leave you shortchanged.

The E 300 is currently the E-Class’ best-selling variant by a huge margin, a situation caused by its distorted pricing.  Still, even without the benefit of its EEV tax exemptions, which would see it priced somewhere between the E 250 and E 400, we’d say the 300 is still the pick of the E-Class range, thanks to its top-range equipment as well as its unrivaled combination of comfort, luxury, performance, and fuel economy. 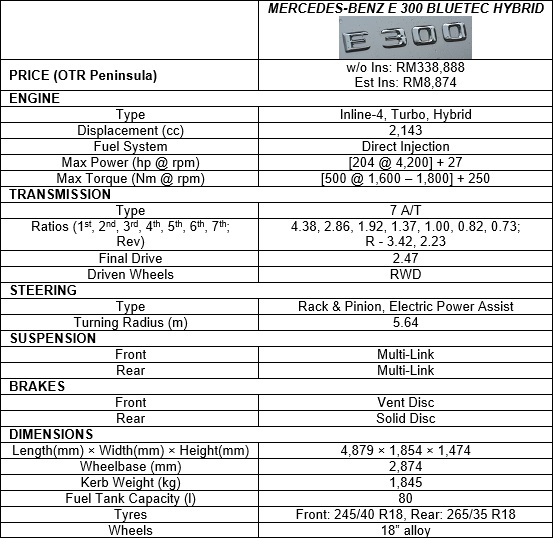