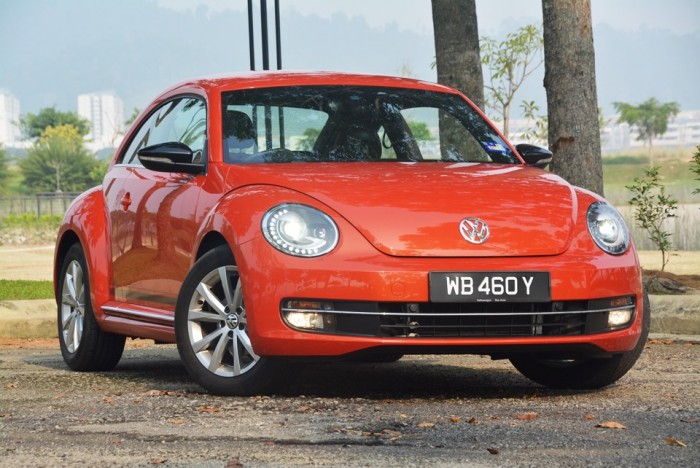 Dieselgate may have hit Volkswagen’s reputation hard, but by recent reckoning, the Wolfsburg-based car maker continues to count itself within the ranks of the world’s largest car makers. Despite shrinking in volume from the previous year, cumulative sales up till October held strong at more than eight million units worldwide.

It is startling to think that this sprawling automotive empire had grown from a car of humble and uncomplicated underpinnings. Developed by Ferdinand Porsche under the directive of Adolf Hitler, the Volkswagen, translated as ‘The People’s Car’ in German, was conceived to offer affordable private transport for the masses. 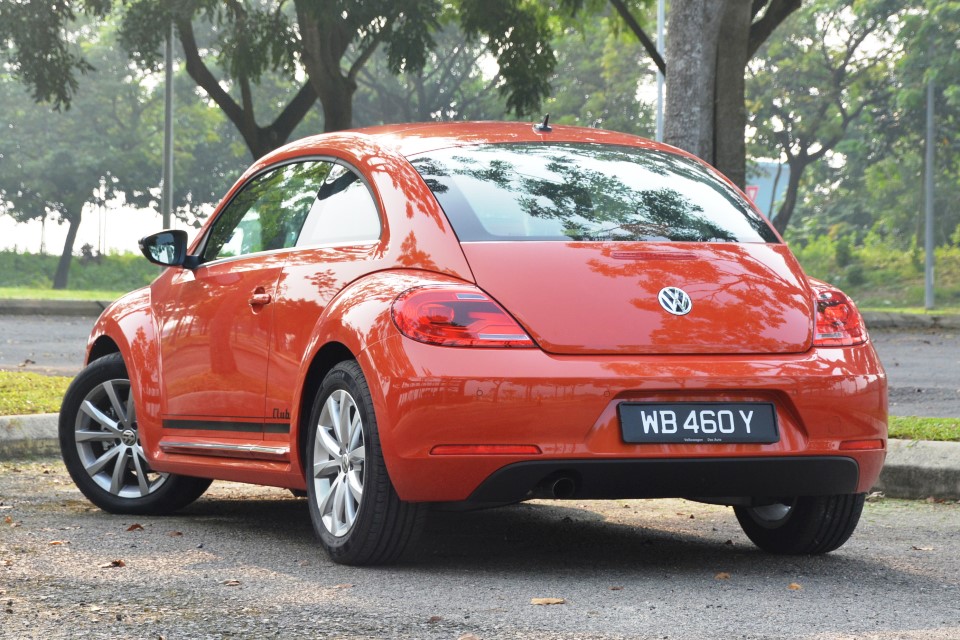 But as the Volkswagen brand grew and expanded its portfolio, the original Volkswagen became known as the Type 1 and eventually became known as the ‘Bug’ or ‘Beetle’ because of its resemblance to the said insect. Series production of the original Beetle started in 1938 and continued for over sixty years, during which it assumed endearing popularity and pop culture significance.

Tapping onto that popularity, Volkswagen has since rolled out two much newer sequels to the Beetle. Much like the MINI by BMW, modern incarnations of the Beetle are built on contemporary hardware, but sporting styling cues that defined their originals. The current Beetle has been around since 2012 and having already reviewed it previously, we reopen its case in 2015. 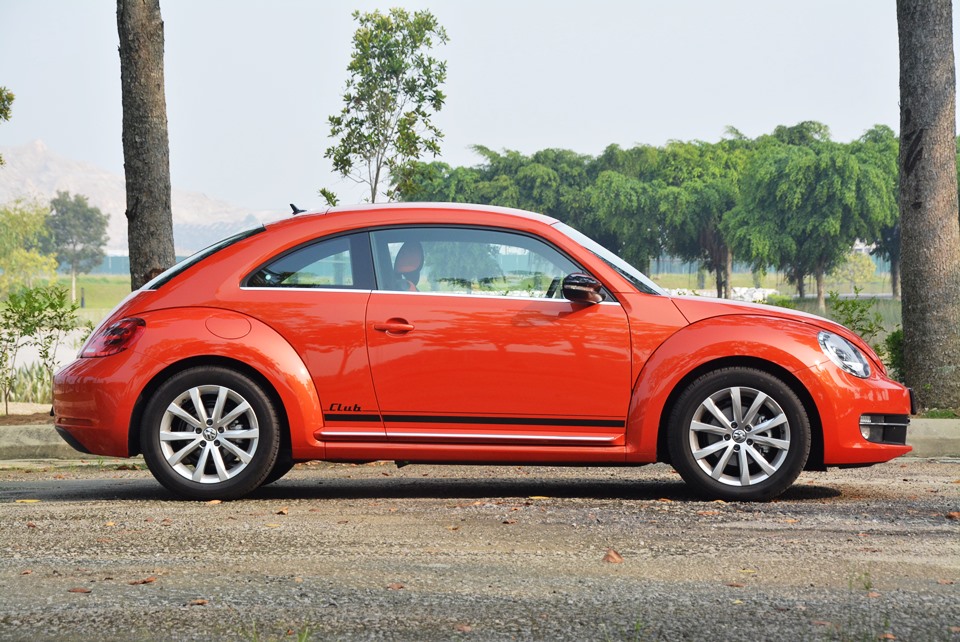 As tested, our Club test car is one of only 50 so-configured Beetles brought into our market at RM153,620 on-the-road excluding insurance. All 50 units, together with 200 units of the similarly limited Bug Edition variant have been sold out, Volkswagen claims.

You still can get the Beetle in its regular guises, with a choice between Design trim at RM136,620 and Sport at RM141,620. All of the abovementioned trim variants are derived from the 1.2 TSI model, with the 1.4- and 2.0-litre variants both officially discontinued for our market.

Just like other models in the VW line-up, the Beetle’s equipment manifest is short on amenities but high on safety. You don’t get keyless entry or reverse camera in any variant, but ISOFIX mounts, electronic stability control, anti-whiplash headrests, hill-hold control, and six airbags are standard in all variants. 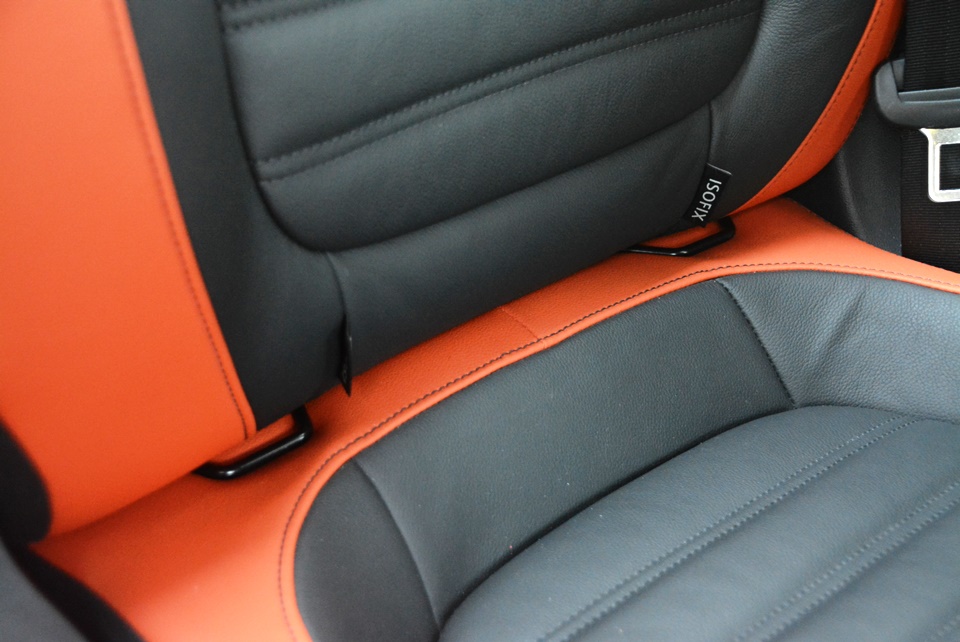 Mechanically, the Beetle has yet to receive any alterations since its launch in 2012. Featuring Golf 6 underpinnings but with its rear multi-links swapped for a torsion beam, the sole powertrain currently offered in our market is the ubiquitous 1,197cc turbocharged eight-valve single overhead camshaft engine rated to produce 103hp and 175Nm, channeled to the front wheels by the DQ200 7-speed dry dual clutch transmission. 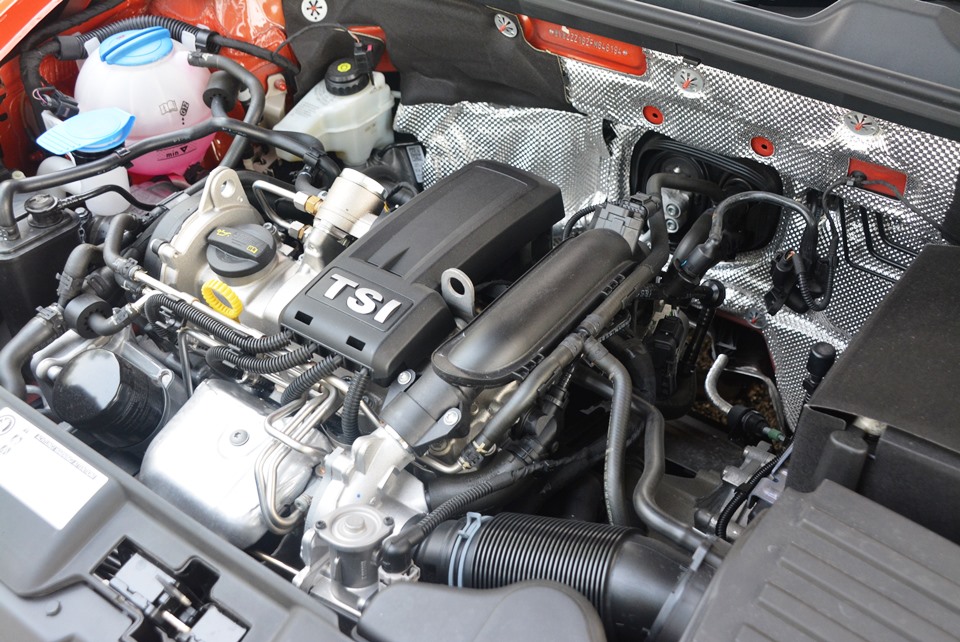 The Beetle’s silhouette is one of the motoring industry’s most recognizable shapes, and it is the central element of this nameplate’s selling point. That Volkswagen can justify building it using previous-generation Golf components and still put a price premium on it over an equivalent current Golf shows the company’s confidence and audaciousness on the Beetle’s appeal.

Vain as it may be, that added confidence is nevertheless justified from a stylistic point of view. Compared to the previous generation New Beetle, the current iteration is appears more muscular and better-proportioned. It seems to sit lower to the ground, looking more squat and less lanky than before.

The fascia of our Club test car is helped by its bi-xenon headlights, which are RM6,000 cost options in the Design and Sport trims that otherwise come with conventional halogen reflector headlamps as standard. Curiously for a European brand, rear fog lamps are not fitted. The Habanero Orange paint job of our test makes the Beetle look positively fetching, although this colour is restricted only to the 50 units of Club edition model. 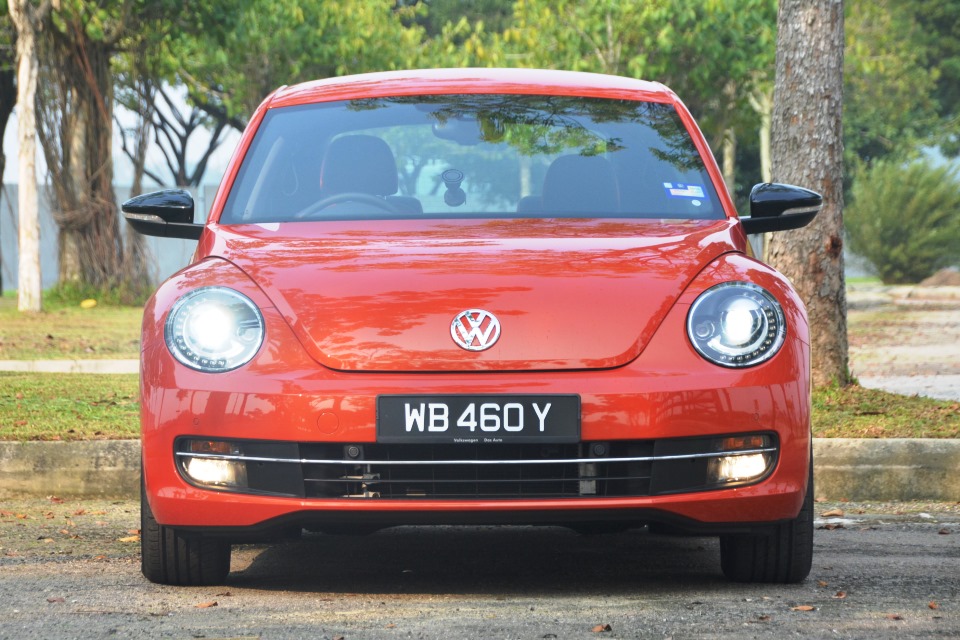 Volkswagen interiors typically score high on ergonomics and perceived build quality, if ultimately lacking in flair. The Beetle stays through to the company’s proven playbook, but its unique position in the line up as a stylistic icon also sees the implementation of a layout that is distinctively unique from other members of the range, despite sharing the family switch gear.

A notable change seen in our 2015 test car is the implementation of the upgraded RCD 310 touchscreen head unit first seen in the Golf 7. Compared to the previous screen, the new one offers crisper graphics and delights with a proximity sensor that raises the lower menu bar only when it detects a palm in the vicinity. 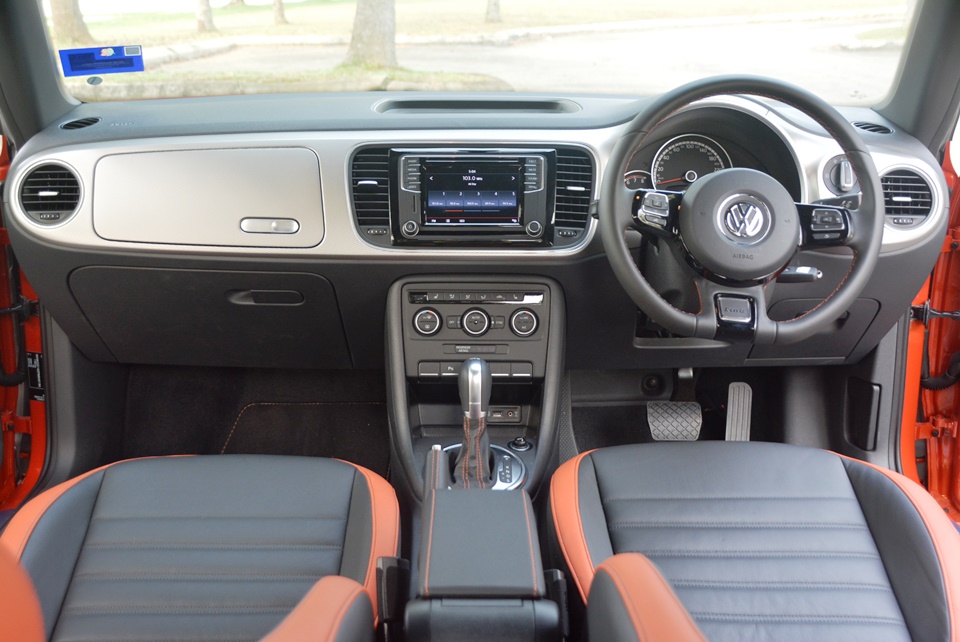 Interior space, for a vehicle which you would expect severe compromises, is rather good in context. You get ample storage space along the centre console in addition to more in the two glove boxes and a third lid at the lower corner of the driver’s side. Boot space, whilst measured at a seemingly meagre 310 litres on paper, is well-shaped and will swallow a decent amount of groceries plus, perhaps, a baby stroller. The rear seats are partitioned to seat strictly two.

Access to the interior is facilitated via a pair of frameless doors, and like all vehicles with frameless doors, the window pane automatically drops a few millimetres and moves back to position when the door is closed. Volkswagen engineers programmed the Beetle’s windows to drop the moment when you either unlock the car from the outside or turn off the engine. Be mindful of this when you park under heavy rain. 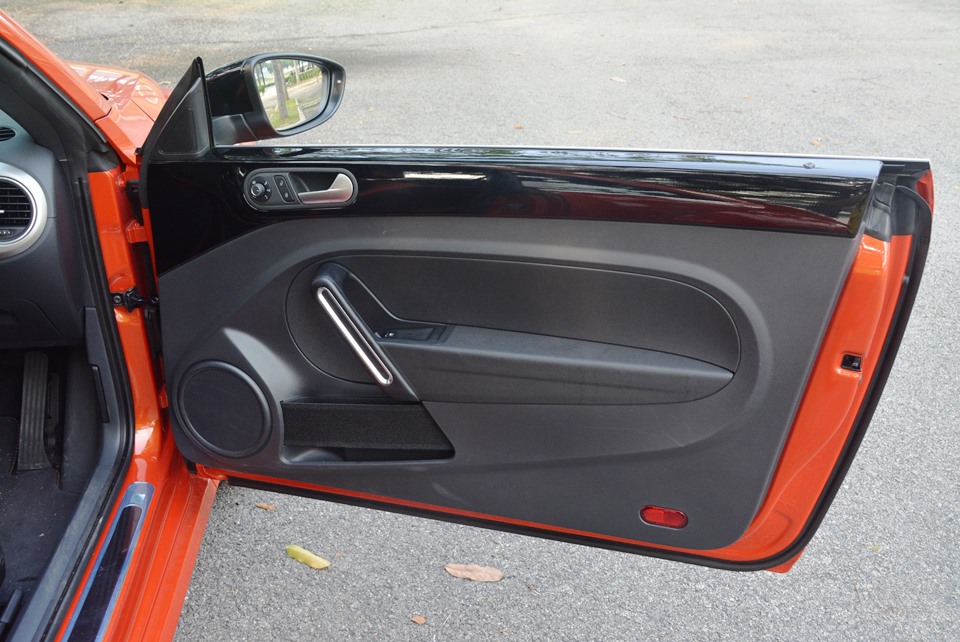 Regardless of model or variant, there is a certain consistency in the way Volkswagen engineers its cars, and that consistency translates to common themes that permeate the driving experience across the range. From the Polo to the Passat, we have come to expect similar sensations of dynamic solidity, impeccable comfort, and strong engine performance.

Our experience with early test cars tell us that the Beetle largely keeps to that template, but slightly lacking the final layer of polish. It’s a much better drive than the previous-generation New Beetle it replaces, but not quite as convincing as the Golf 6 which it is based upon, being neither as comfortable nor as sharp on the turn. Notably, the switch from the Golf 6‘s multi-links to a torsion beam has led to reduced pliancy over the rear axle.

Straight line performance from the turbocharged motor is adequate for the purpose, but not quite as punchy as we recalled of our previous 1.2 TSI test car. We know 103hp and 175Nm isn’t actually a lot to go on a car weighing the better part of 1.3 tonnes dry, but the engine seems to have lost some of its responsiveness and free-revving tendencies from our previous encounter with it. We advise that you set your expectations to ‘okay’ as opposed to ‘wow’ before the test drive. 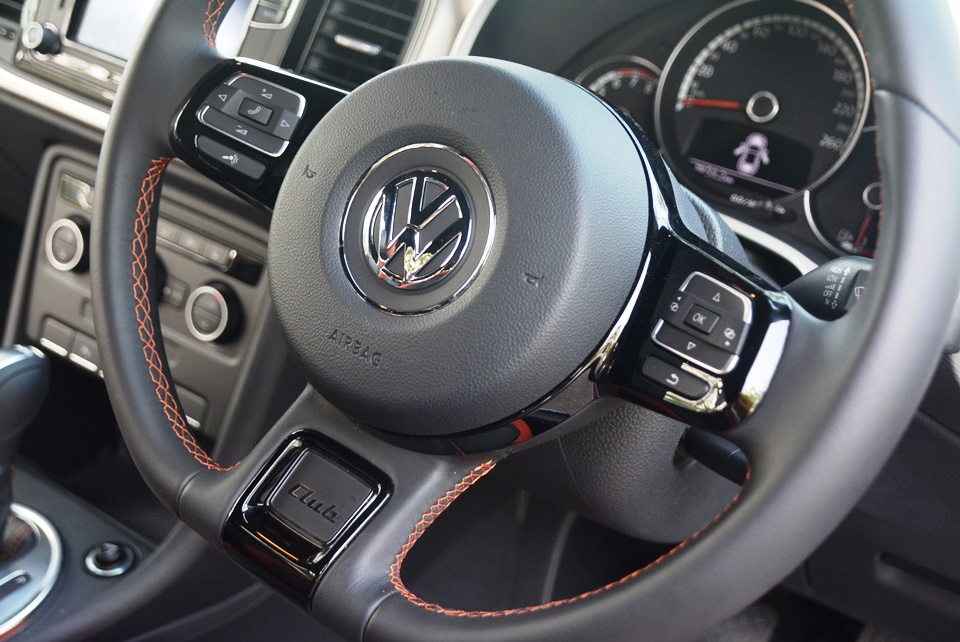 The Beetle is a decent car, but it is a purchase that cannot be justified by any rational thought process. At that price range, the Jetta and Golf remain far more sensible being more practical vehicles and, in the Golf’s case, a generation more advanced. Like the MINI by BMW, although that occupies a far higher price segment, the Beetle is a style icon, a fashion statement, a car you buy for reasons of vanity rather than practicality.

In context, the Beetle is does an adequate job in balancing usable performance, driving comfort, and overall practicality packaged in distinctly iconic styling. It is unlikely to appeal to driving enthusiasts, nor will it fit the bill for buyers with practical concerns in mind. But if you specifically want the Beetle for its looks, then what it offers is style with good usefulness and day-to-day livability. 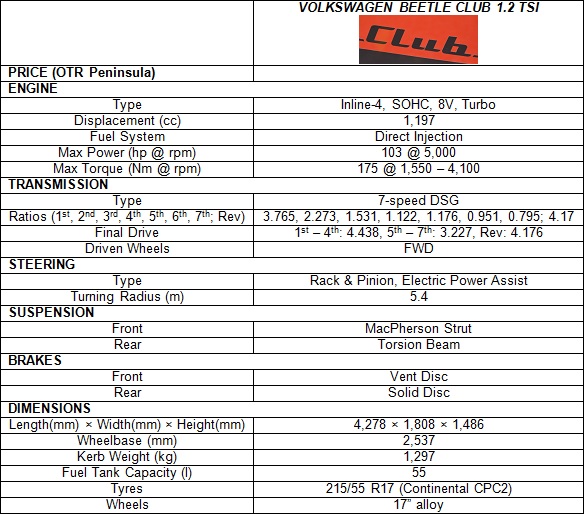