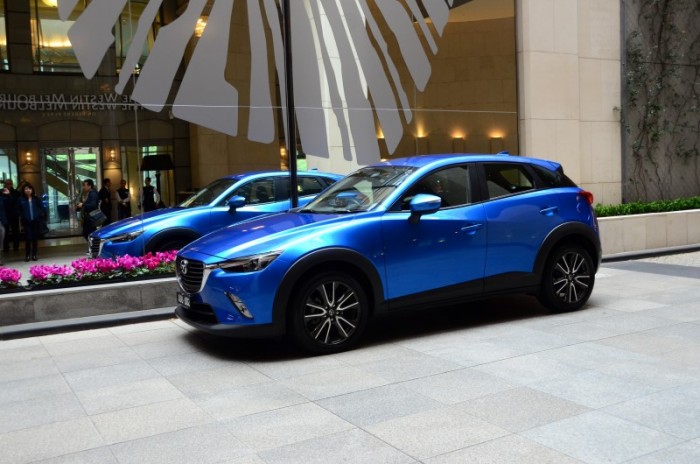 When I first saw the Mazda CX-3, it was sometime in July earlier this year when I was in Australia for a short visit. It was in the Gold Coast area on the highway between the Gold Coast and Brisbane, and it was in my favourite colour, blue. My first impression of the CX-3 was that it did look a little small from the outside, being not that much larger than a Mazda2, except for the fact that it stood a little taller, but what impressed me was that the Australian driver in that CX-3 seemed to be enjoying driving it. Despite the speed limit being only 100 km/h, the CX-3 looked very lively as it scooted along, darting in and out of traffic in a very nippy way.

Fast-forwarding to September, I am back here again, this time in Melbourne, as a guest of Mazda and Bermaz Motor Malaysia, to check out the Mazda CX-3. We arrived in Melbourne after a long overnight flight, and day one after arrival was basically a rest day, while day two was a trip to the Twelve Apostles along the Great Ocean Road and back. Day three was the day of action, during which we got close and personal with the Mazda CX-3. Coincidentally, I got to drive a blue one this time.

The Mazda CX-3 will not need much introduction to the SUV-hungry enthusiasts here in Malaysia, who eagerly awaits its arrival on Malaysian shores, but for the uninitiated, it is basically a Cross-over SUV that is smaller than the CX-5. The CX-3 is powered by the same 2.0 litre SkyActiv-G (gasoline) engine that is found in the Mazda CX-5, Mazda3, and Mazda6. There is a 1.5 litre SkyActiv-D (diesel) engine version also available. Two drive trains are available, and the Australian buyers can opt either for FWD (Front-Wheel Drive) or AWD (All-Wheel Drive). From my research, it appears that the ECU tuning is slightly different to bring the power band to be effective at the lower part of the rev range.

From what I hear, Malaysia will only get the FWD, 2.0-litre gasoline model for the time being, and the official launch shall be sometime in November this year. The Malaysian retail prices are as yet undisclosed, but a source close to Mazda has hinted that it will not be ‘cheap’, as it will be a CBU (fully imported), not to mention that the weakening Malaysian Ringgit will also affect the final retail price. 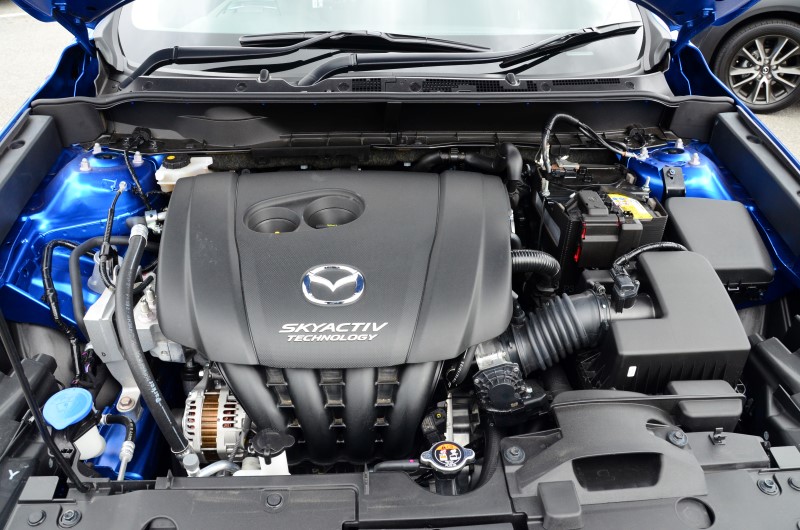 The Mazda CX-3 I got to drive was a FWD model, and with its 2.0 litre engine, felt pretty good to drive. Plenty of power, especially when overtaking, is something I always appreciate. The 6-speed automatic transmission, which is probably the same as that in the other Mazda models which share the same engine, is as usual, seamless and smooth. Although the speed limits in Australia (which we were told, are very strictly enforced) did not allow me to drive very fast, I could feel that exhilarating surge in the mid-range speeds when I needed to accelerate. There are no paddle-shifts, but there is the ‘manual’ mode using the gear shift lever, and that was quite useful in a short forest section that was relatively ‘tight’.

In the same forest section, although the speed limit was 80 km/h, we still managed to have fun testing out the handling capabilities. The CX-3 corners quite flat, with minimal body roll, despite the fact that the rear suspension is a torsion beam arrangement. 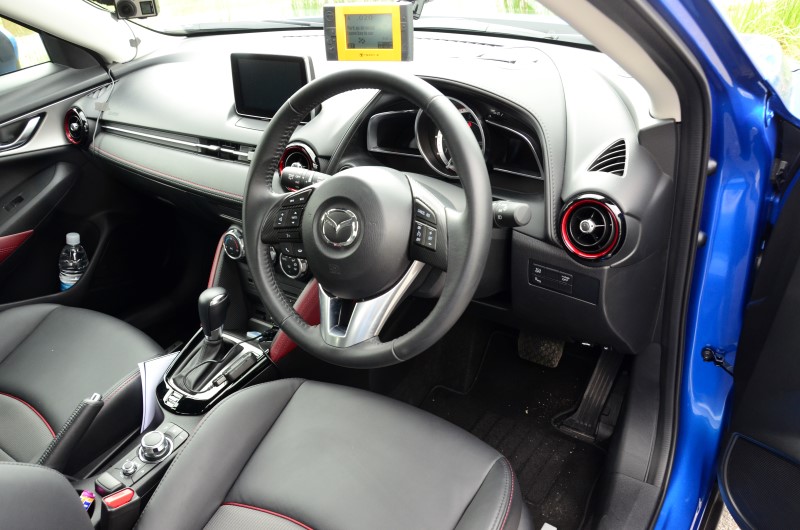 For the more exuberant drivers, Mazda have added a ‘Sports’ mode; by pushing this button, Mazda allows drivers who want a little bit more power to have some fun, by moving up the gear shift points, and even changing down a gear or two under braking.

Aesthetically, the Mazda CX-3 is a winner from the start – it looks great, just as the designers planned it. With a larger ratio of body to glass area, and with character lines cleverly put in to break up the monotony of large panels, the CX-3 looks more like an art piece – it is so unconventional that I am pretty sure that people will buy it just for its looks. These people will appreciate it even more through the passage of time, as they discover the true value of the vehicle, which goes beyond just the looks. To add on to its appeal, sporty-looking 18-inch alloy wheels (which I am told will also adorn the Malaysian Spec models) make it look so good. 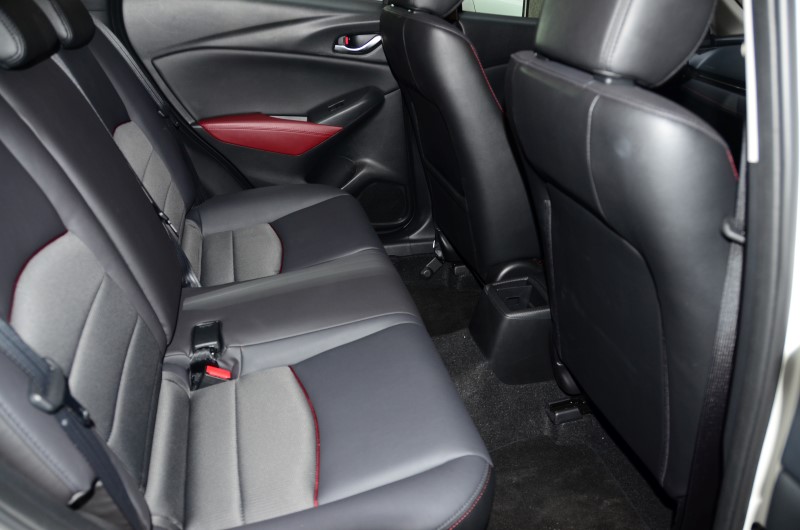 For starters, when they drive, they will enjoy the freedom that a powerful engine delivers – remembering that it tips the scales at 1,195kg (kerb weight), it should out-accelerate the Mazda CX-5 and possibly the Mazda3. Mooted time for the zero to 100 km/h dash is a claimed 8.5 seconds. Top speed is claimed at 192 km/h, a figure that we will only be able to confirm when the CX-3 hits our shores.

There are many parts that are carry-overs from the other Mazda SkyActiv models. From what I can glean, the wing mirrors are from the CX-5 (as noted by our Star motoring editor), the air-conditioner controls are from the Mazda3, and the instrument cluster is from the Mazda2. The Australian model also had a ‘heads-up’ display very similar to that in the Mazda 3. Having common parts with other models does cut down development time and cost, and I am agreeable to that – no sense in re-inventing the wheel, right? 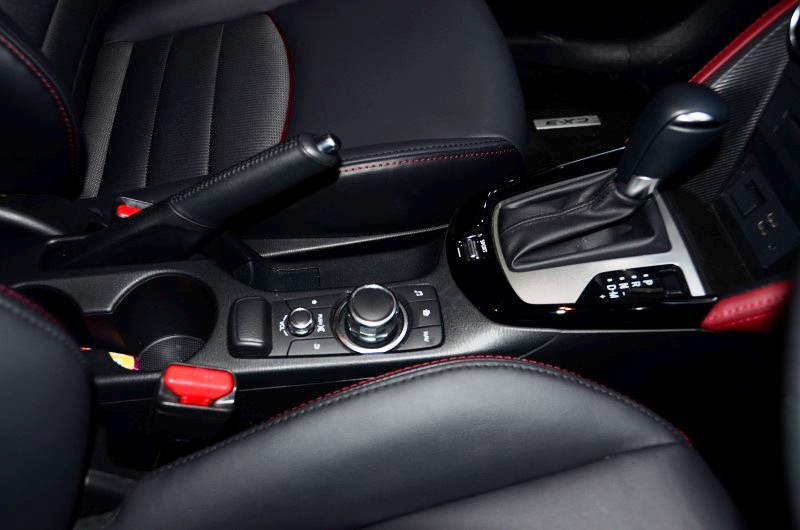 The interior is quite interesting – Seats are comfortable and big enough, and the interior fittings are a mixture of soft touch plastic and the normal hard type, but quite tastefully done. In the centre of the dashboard there is that large 7-inch display that is common to most of the SKYACTIV models that provide connectivity, audio display, navigation (if available), and driving data display. Control of the display is through a ‘Commander Control’ knob located on the centre console just behind the gear lever, within easy reach. The Malaysian specifications are not confirmed, but we understand that it will be top-of-the-range.

Drivers will also appreciate the superb fuel economy. We averaged between 6.5 to 7.5 litres per 100 kilometres on our drive which covered about 200 kilometres, over highways and country roads. Bearing in mind that we were (mostly) within the Victoria state speed limits, I expect that Malaysian drivers who stick to the speed limits here would probably get about the same fuel economy, plus or minus 10 percent. Of course we would also have the option to push that ‘Sports’ mode button, in which case we would be exercising the option to let fuel consumption slide just a little for the sake of more grunt.

All things said and done, I found the Mazda CX-3 ‘interesting’. It has good power, handles well, drives well, looks good, and with SKYACTIV technology, it is economical as well. The average man or woman may find its size a little small (it is based on the Mazda 2 underpinnings), but just as I would pay as much for a VW Golf rather than a much larger-sized Japanese sedan, there will be others who are as ‘unconventional’ as I am, who will go for the CX-3. For those who regard the CX-5 as too big, and I know some who like SUV’s but hate the size, the CX-3 would be a good pick.