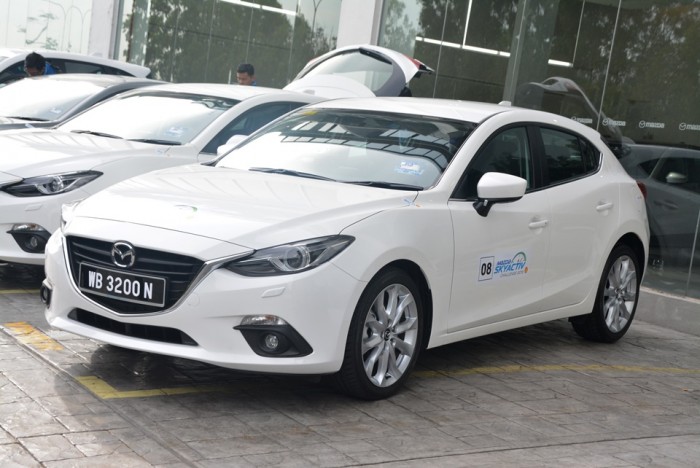 Mazda’s rigourously-engineered SkyActiv engines have a deserved reputation of impressive real world parsimony. It is a reputation that local distributors Bermaz Motors Sdn Bhd were eager to put to the test and dutifully called upon help from the Malaysian motoring media fraternity to take an assortment of Mazda2, Mazda3, and Mazda CX-5 test vehicles on an outstation journey using the least fuel we possibly could.

Unlike the earlier 1,000km diesel challenge that took us from Bangkok to Changlun, the cars this time round are petrol powered and the distance was appropriately shortened to just under 350km from the Klang Valley to Johor Bahru. There were five cars of each model and the 30 motoring writers invited for the trip were paired two to a car. Cars in the CX-5 group, for the record, were made up entirely of 2.0-litre 2WD variants. 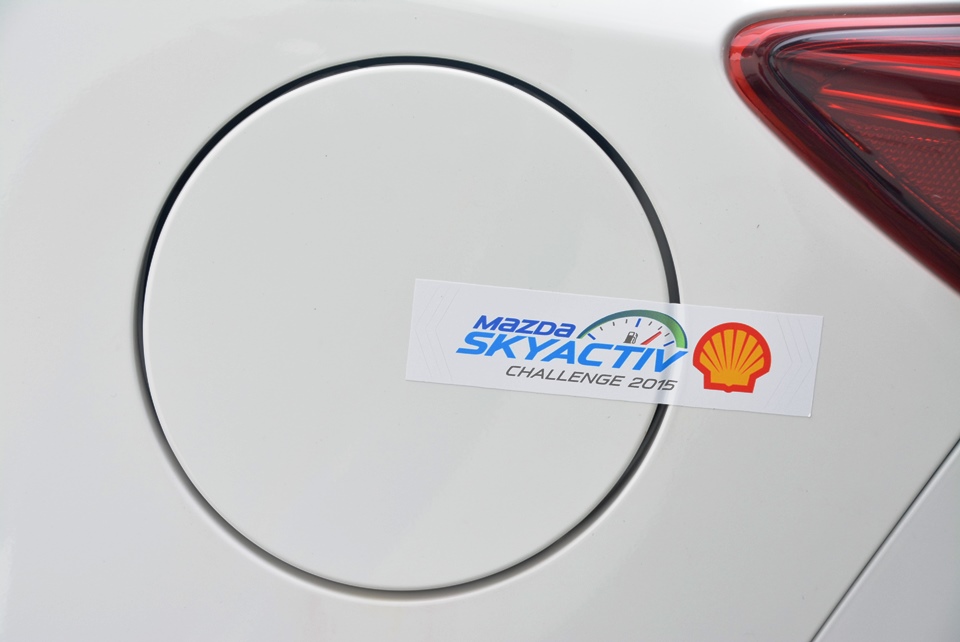 In the interest of a full disclosure, we should reveal that the most economical pair in each category stood to win a not-very-cheap Samsung phone for their troubles. The prospect of this reward as well as bragging rights served as motivating factors for participants. Paired with my good friend Chips Yap from Motor Trader Malaysia, we were placed in a Mazda3 hatchback.

Similar competition mechanics to the Bangkok challenge were applied here. Measurement of fuel consumed was conducted with the old-fashioned brim-to-brim way; not the most accurate methodology, we acknowledge, but understandably the most convenient. Each vehicle’s official fuel consumption, be it in l/100km or km/l, was calculated by dividing the amount of fuel added in at the finishing point in Shell Permas Jaya against an official distance of 348.3km – regardless of the actual distance which the vehicle covered. For the record, Google Maps states the distance to be 345km, but we do not regard that to be a sufficiently significant discrepancy for alam.

The bonnet and fuel lid of all vehicles were sealed against tampering, whilst stickers were similarly placed on the base of the side mirrors to discourage competitors from folding them in. Air-conditioning of all cars were run on the same settings with their controls sealed. Competitors were further discouraged from unrealistic driving practices with the implementation of time controls, in which every five minutes of lateness adds 0.3 l/100km to the car’s calculated fuel consumption.

We were flagged off from the Bermaz HQ in Glenmarie with Chips taking the first driving stint. Lessons from the earlier Bangkok-Changlun drive were quickly put to use as I plotted our journey on Waze to give us more reliable estimates of our arrival time and adjust our speeds accordingly. From experience, this is a useful approach to avoid being slapped with time penalties. 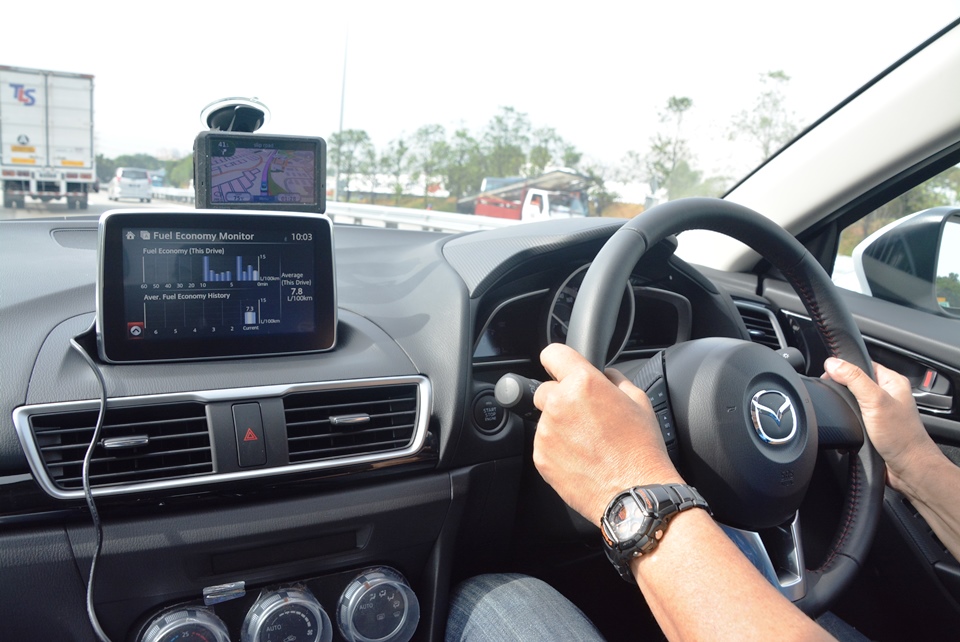 Our efforts were hammered by a curve ball during the final leg of the challenge, however, with me behind the wheel and Google Maps on Chips’ phone warning us of a 30-minute crawl along the highway somewhere after Yong Peng that pushed our ETA at Permas Jaya past our designated arrival time which would have incurred penalties for us. 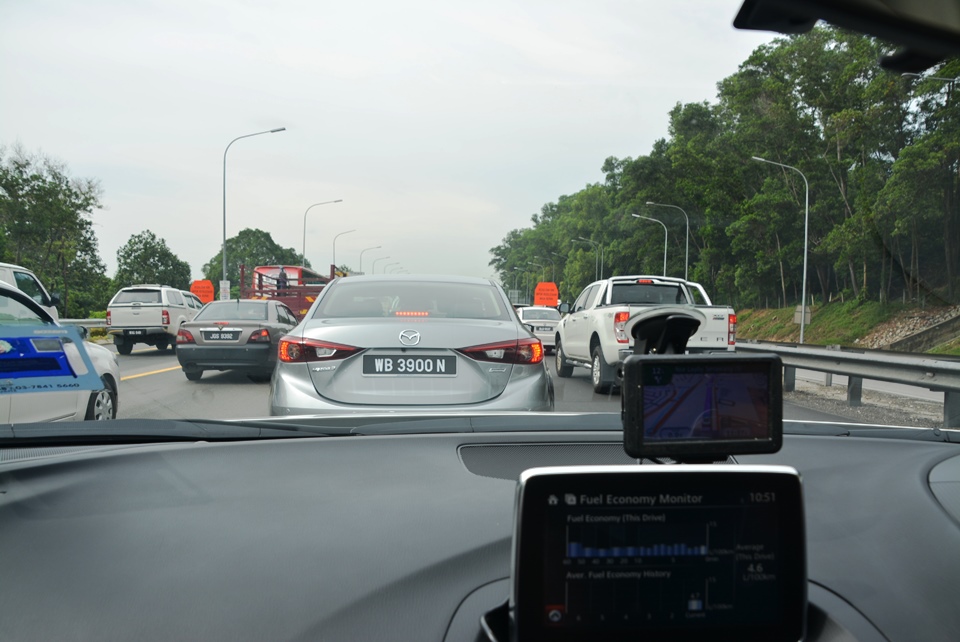 At that point, we made a decision to prioritize minimizing our time penalty over keeping fuel consumption levels down; so, we sped up, overtaking quite a few cars in the process, and becoming the first to reach the jammed stretch ahead of the other competing cars. At that point, it was clear that none of the competing vehicles had a chance of reaching the finish on time, and there was discussion over walkie-talkies on whether to keep time penalty system or abolish it altogether.

Poor reception between the walkie-talkies resulted in a miscommunication in which me and Chips assumed the time penalty was in place whilst it was in actual fact abolished. We were the first car to emerge from the jammed stretch, and instead of feathering the throttle, we increased our pace with hopes of avoiding or at least minimizing our penalty. 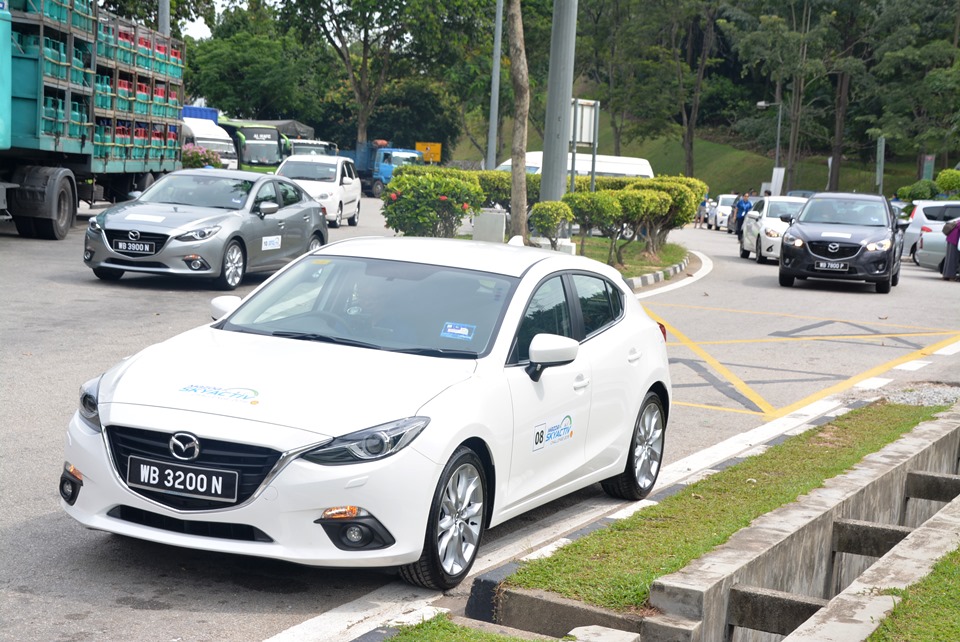 We were the first car to reach Shell Permas Jaya, being four minutes late from our designated time. Our trip computer calculated average consumption of 5.0 l/100km. The event marshals were able to get no more than 12.69 litres of fuel into our vehicle; calculated against the event’s official distance, we arrived at an official fuel consumption of 3.68 l/100km. If penalties had remained, our result would have read 3.98 l/100km.

As it were, consumption of 5.0 l/100km as calculated by the vehicle’s trip computer would have been a very impressive number for a naturally-aspirated non-hybrid petrol engine; 3.68 l/100km as obtained using the competition’s measurement methodology was outright astonishing, what’s even more shocking for us to discover later on was that 3.68 had put us LAST in the Mazda3 category, compared to a category-best of 2.99 l/100km.

Results from the other categories were just as spectacular. The five Mazda2s ranged between 2.78 and 3.13 l/100km, even better than results managed by the diesel variant during the 1,000km Bangkok-Changlun drive. To recap, numbers obtained from the Thailand drive ranged from 2.72 to 3.53 l/100km without accounting for lateness penalties.

The CX-5 category had one car returning with official fuel consumption of 1.98 l/100km. Despite their best efforts, event marshals at Permas Jaya simply could not get a drop of fuel beyond 6.9 litres into the vehicle’s tank. The result was officially accepted as far as the competition was concerned, but it is best to dismiss it as an anomaly. Other vehicles in the CX-5 category ranged between 3.52 and 3.81 l/100km. A source from Bermaz tells us that the vehicle has been locked away since the end of the event awaiting inspection by the company’s technicians. 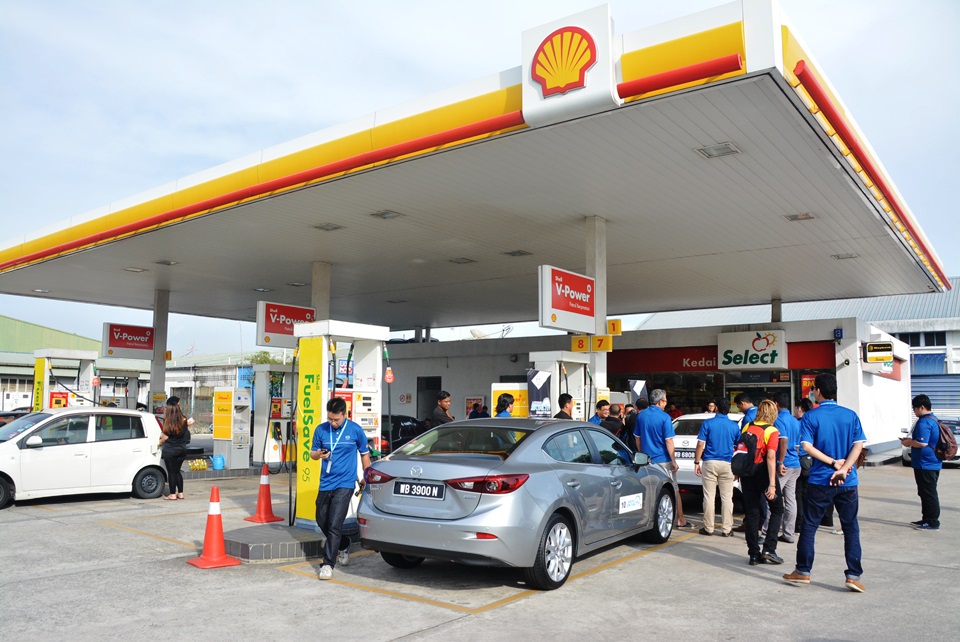 As usual with the publishing of any results from fuel economy challenges, we must emphasize that the numbers were obtained under competitive conditions involving very disciplined driving techniques which may not be realistically reproduced on a day-to-day basis. We should also re-emphasize that with most of the event’s route took place on the highways, which further helped contribute lower consumption.

The official results of this event are perhaps not realistic enough to achieve without very deliberate effort, and we are not even advocating that you try. What we are rather confident of coming from this event, however, especially considering the fact that our car was pushed to relatively high speeds along some stretches, is that these Mazda SkyActiv engines can be genuinely economical in the real world.