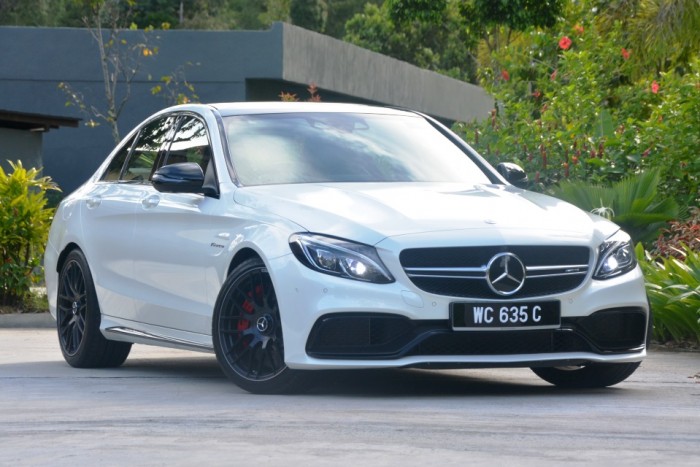 In today’s era of downsized engines, the once-cherished idea of putting big engines in small cars to create performance derivatives seem rather last century. Why plonk in a big V8 when a turbocharged six-cylinder engine will deliver similar performance in conjunction with far superior rated fuel economy?

There is also the question of dynamic balance, particularly in the context of front-engined cars; a heavier engine contributes to a heavier nose, which in turn leads to increased tendency to understeer. A smaller lighter engine, on the other hand, has less mass resting over the front axle, contributing to keener turn-in and more agile handling.

On that backdrop, we unsurprisingly find that the AMG derivative of Mercedes-Benz’s W205 C-Class has its engine capacity slashed from 6.2 to four litres flat. Like every other performance car currently in the market, the Mercedes-AMG C 63, as it is now known as, is turbocharged too, but its motion is remarkably derived by the reciprocal motion of no less than eight pistons, as opposed to a reduced number of four or six. 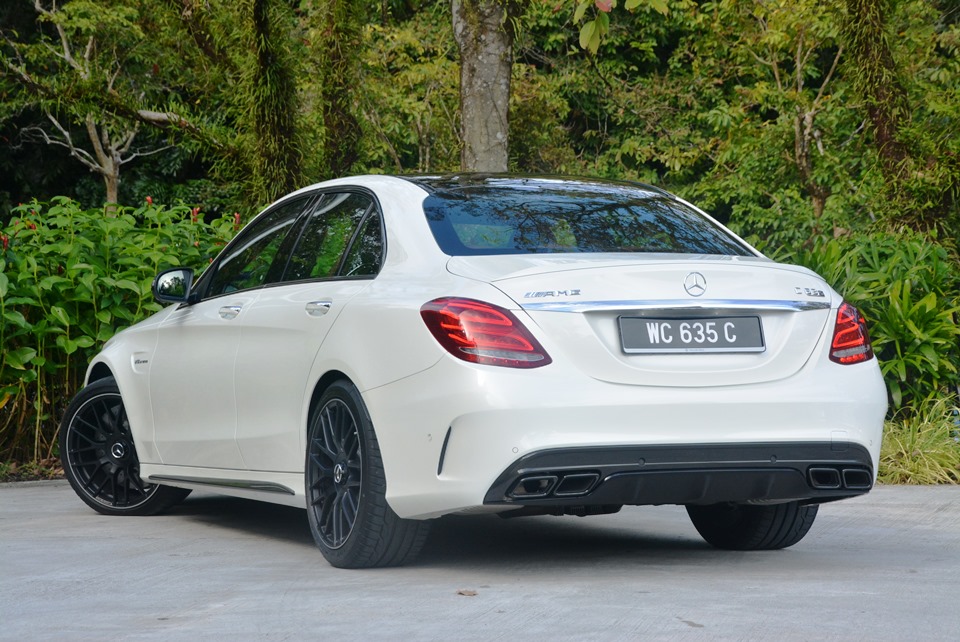 Globally, Mercedes-AMG makes two versions of its C-Class derivative, the regular C 63, or the uprated C 63 S that is offered as the vehicle’s standard specification for the Malaysian market. From the highest-specced regular C-Class, namely the C 250, it is a jump of over RM400k to meet Mercedes-Benz Malaysia’s asking price of RM698,888 without insurance to have a C 63 S on the road.

For this year only but with no specific limit on number of units, customers can also order the C 63 S in Edition 1 trim which, for RM723,888, adds in various cosmetic additions inside out for an even sportier and more exclusive appearance. The package does not come with any electronic or mechanical enhancements.

We are not typically keen to endorse option packages that do not offer any function beyond aesthetics, but as an illustration of the C 63’s price competitiveness, it is worth noting that ticking the Edition 1 box lands you a car that costs less than the BMW M3 whilst offering you more horsepower. 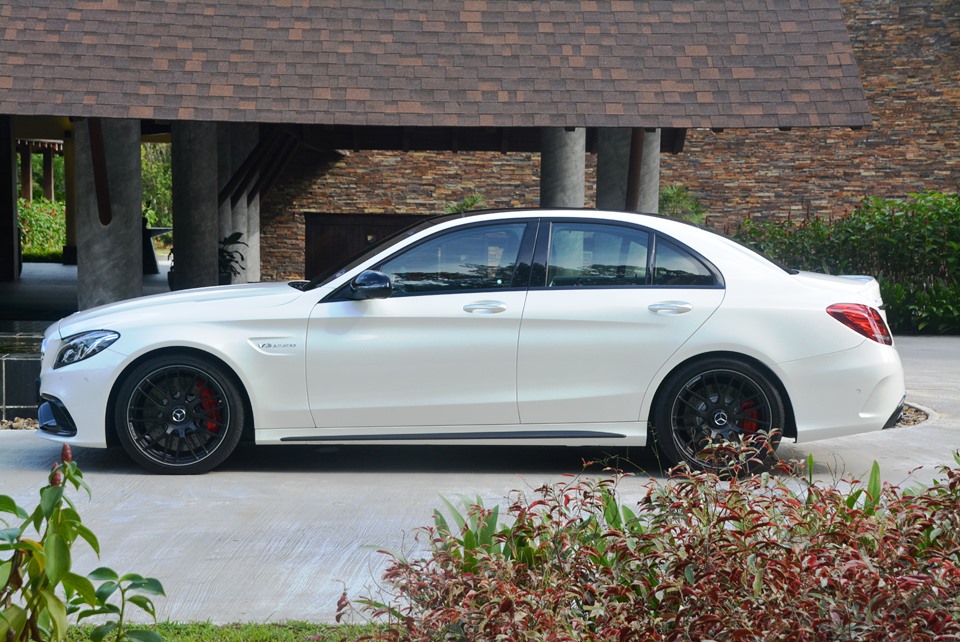 Whilst the C 63 nominally occupies the same W205 platform as your neighbour’s C 200, you would expect that, having to cope with more than the triple the outputs, substantial portions of the chassis, particularly its suspension, brakes, and steering, are made from bespoke components. To start with, stopping power is enhanced with enlarged compound brake discs up front that can be optionally upgraded to carbon ceramic replacements.

Both front and rear axles of the C 63 are model-specific as well, featuring high aluminium content and sporting its own unique performance-oriented geometry and incorporating adaptive dampers. The rear wheels are aligned with higher negative camber compared to a regular C-Class, whilst the front wheels are spaced wider apart and turn upon model-specific steering knuckles. 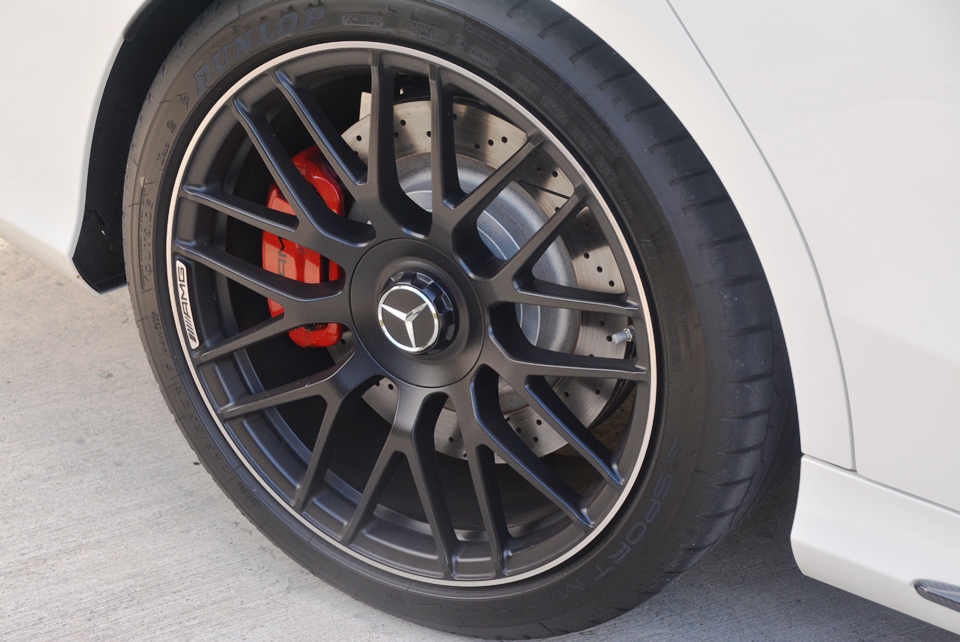 To better manage the deployment of outputs at the rear wheels, both versions of the C 63 get rear locking differentials, with the C 63 S variant getting an electronic-operated unit as standard. Mercedes claims that it is more sensitive and responds more rapidly than the mechanical alternative fitted in the ‘regular’ C 63. Both versions perform the same duty, however, which is to reduce slip at the inner wheel, giving the driver added confidence to power earlier out of a corner.

A sonorous engine is always the highlight of an AMG-fettled vehicle, and the C 63 looks to keep that tradition going. Despite downsizing in capacity from the predecessor, it’s still a V8, albeit one helped along with a pair of turbochargers to generate outputs of 510hp and 700Nm. Code-named M177, the 4.0-litre powertrain is closely related to the AMG GT‘s M178 V8 of the same capacity, with key difference being the C 63 utilizing wet-sump lubrication as opposed to the GT‘s dry sump. 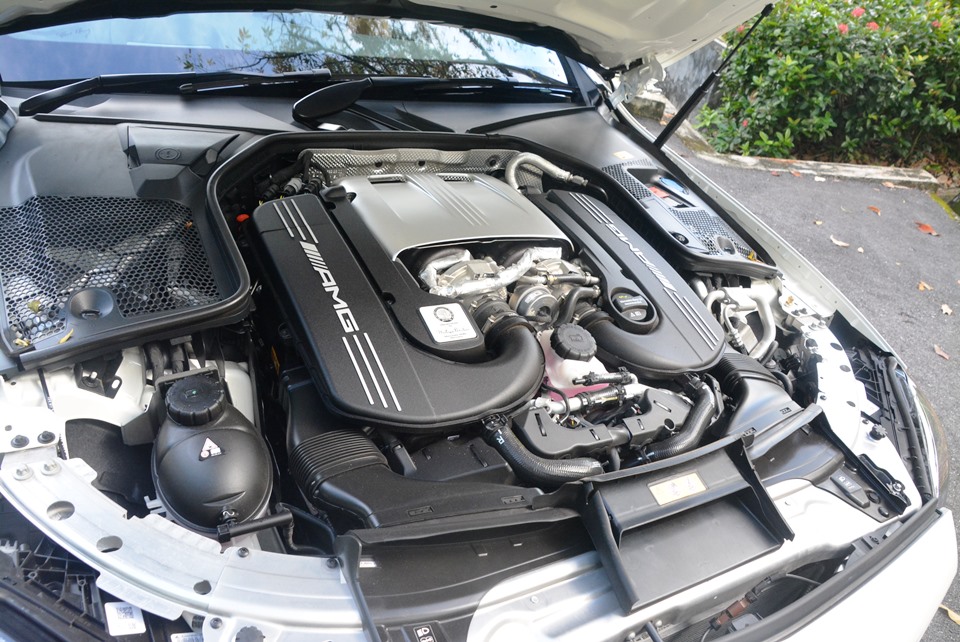 Anybody looking to dress up their regular C-Class to imitate the C 63 will be faced with quite a task at hand to make a convincing job of it. Besides the various smatterings of ‘AMG’ and ‘V8 biturbo’ badges, the C 63 also wears slightly different body panels from the regular models. Light clusters are identical though.

Up front, the C 63 actually stretches 54mm further forward than a regular C-Class, whilst its fenders flare 14mm wider on each side. Besides giving the C 63 a more menacing stance and proportion, these expanded dimensions serve practical purposes, namely to accommodate the large engine both in terms of providing sheer space as well as structural reinforcements to cope with the extreme forces generated by the engine’s enhanced performance. 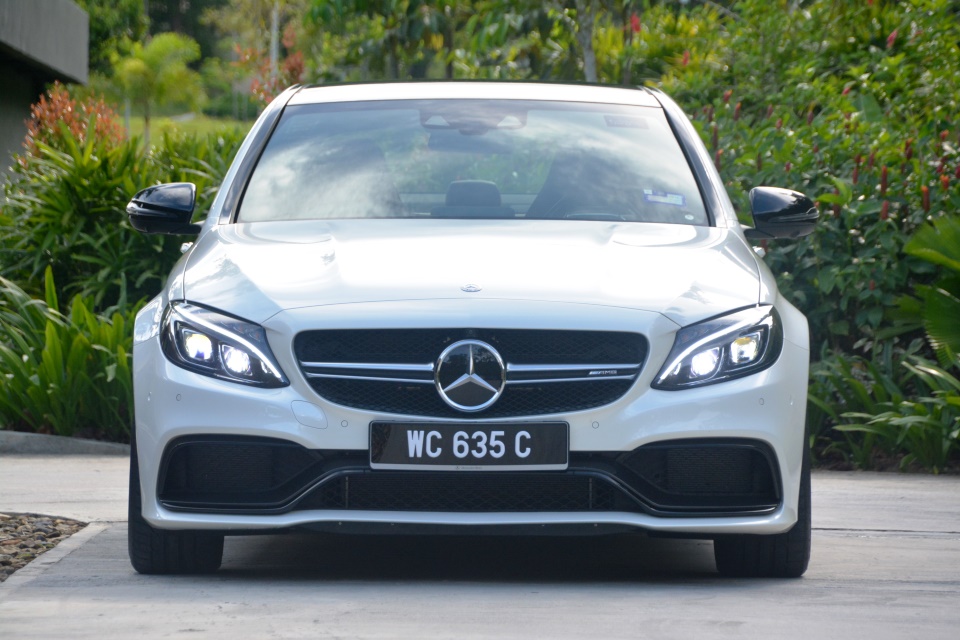 In line with today’s design tastes, the rear bumper features a lower diffuser with integrated quad exhaust tips. We are less than impressed, however, that the four visible tips are actually fake and that they conceal the actual pair of pipes just behind. Fake exhaust tips, in our opinion, have no place in a Mercedes-AMG model; better, we feel, to show two honest pipes than four fake ones.

Takers of the Edition 1 package get their C 63 S fitted with even more exclusive touches such as high gloss black finish on the rear spoiler, chrome plated exhausts, red highlights on the front grille and side mirrors, unique design 19-inch alloys, and matt graphite grey side decals. 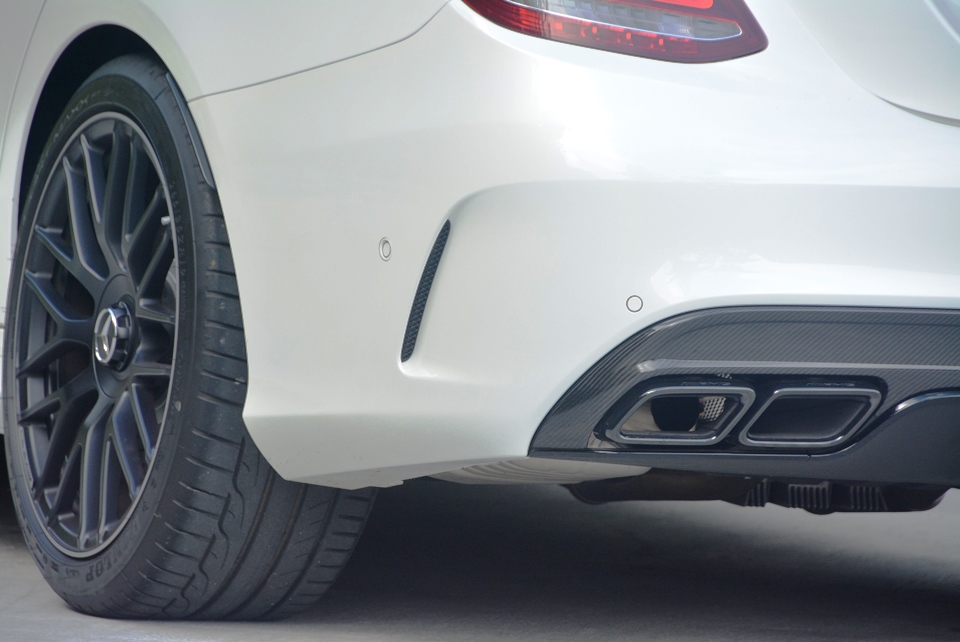 Even in its most basic state, the W205 C-Class boasts perhaps one of the most alluring cabins of the segment, one built with a level of quality and craftsmanship that not only exceeds its peers, but outright good enough to trouble vehicles from a segment above. It is a wonderful throwback to the days when Mercedes built vehicles with a seemingly bottomless pit of money.

Built on such solid foundations of excellence, the C 63 S further raises the bar with a plethora of trim inserts and fittings that serve to highlight its position as the top dog C-Class. Indeed, with an AMG badge smack in the middle of the centre console along with carbon fibre strapped on the dashboard and instrument cluster, you’d be very hard-pressed to forget your surroundings.

For good measure, Mercedes-AMG fixes an IWC analog clock right at the heart of the dashboard to tell you the time – not strictly necessary, but in keeping with the theme of a C-Class cabin in general, it’s there just because Mercedes can. Simply put, if you like your surroundings to feel expensive, the C 63 S does a particularly good job in satisfying that requirement. 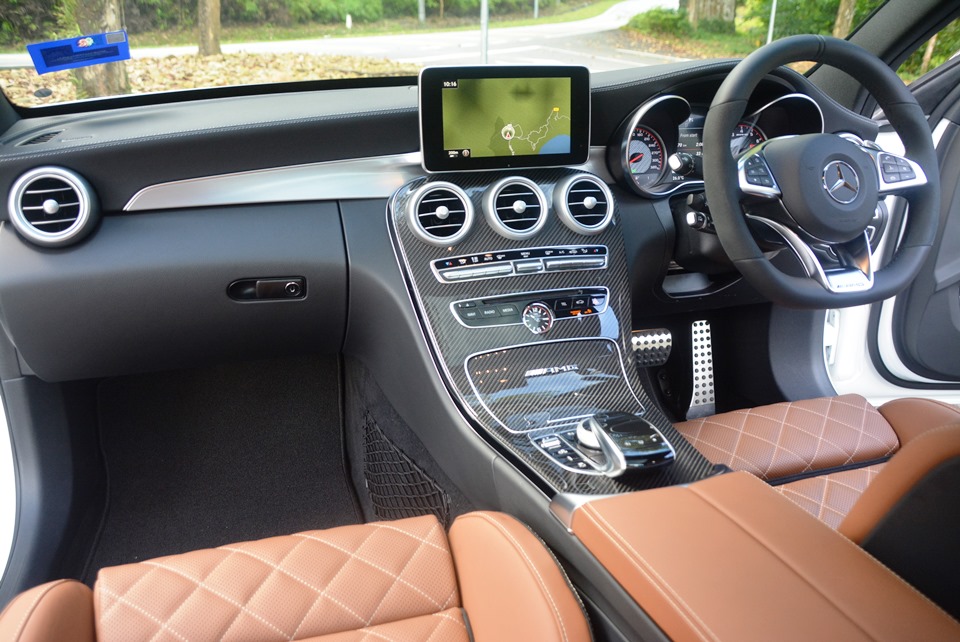 You might expect a compact sedan shoved with a V8 engine up front to offer more in the way of brute force along a straight line than delicate poise around the bends. The good news is that the C 63 S delivers on both counts and with considerable aplomb.

It may not have the clinical precision of a BMW M3, but the AMG scores very highly in the way its V8 tingle your senses on its way to the red line, as well as the deftness of its controls and the benign calibration of its handling. Rather than monster its way through apexes, the C 63 S is a car which works with you through every bend and telegraphs its intentions to you in crisp clarity through its lively steering wheel. It emboldens you to feed in the throttle and confidently power your way out of corners. 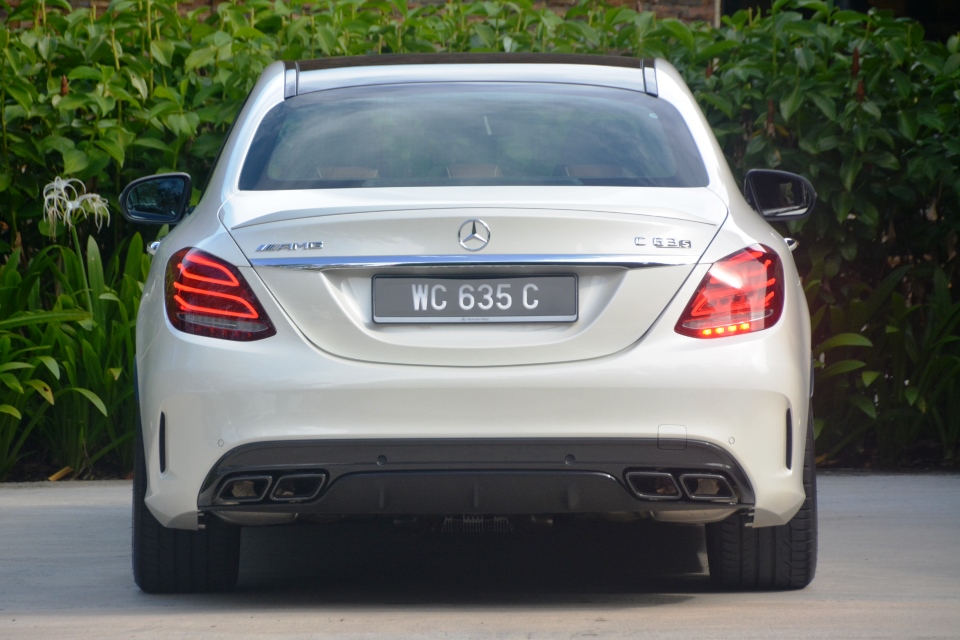 Typical of performance-focused variants of any model, there is the inevitable compromise in comfort and rolling refinement to achieve the sharpness in response and visceral characteristics that is demanded by buyers shopping in this segment. The C 63 S notably sacrifices some pliancy in its primary ride; rebound over bumps can be harsh and you’re best advised to avoid potholes at all costs. It is a livable setup, however, and an entirely acceptable compromise for the kind of performance and handling effervescence on offer.

Delightful to exploit too, is the smoothness and linearity of the V8 engine’s power delivery; allied with the bang-on calibration of its 7-speed multi-clutch automatic transmission, acceleration can be as brutal or as silky smooth as you dictate with a flick of your right foot. Its richness of mid-range torque mean that even in its softer driving modes effortless progress is always at your disposal. Such flexibility makes its case as a viable day-to-day vehicle. 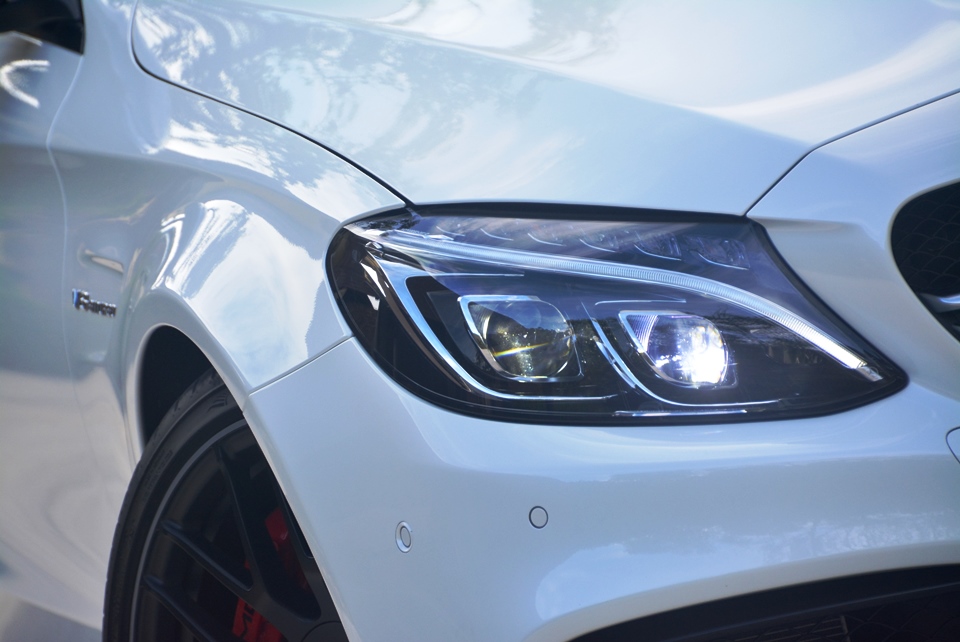 Accessible performance. The Mercedes-AMG C 63 S offers a lot without asking for too much in return. Even with the Edition 1 option ticked, the C 63 S undercuts both the BMW M3/M4 twins and the Lexus RC F by considerable margins whilst handsomely thumping the outputs of both. Even if its clientele are not made up of cash-strapped individuals, value for money is still a significant factor of purchase in this segment, and Mercedes is offering precisely that here.

Having said that, the appeal of an AMG-badged Mercedes has to extend beyond monetary terms; what the C 63 does very well is to harness its full performance potential and allow it to be enjoyed by a wider spectrum of drivers and over a greater variety of circumstances. It is easy enough to plonk a big engine into a small car and make it go very fast along a straight line. Instilling a finely-poised balanced and composure to go with that performance, that’s the higher art, and that’s precisely what the C 63 offers. 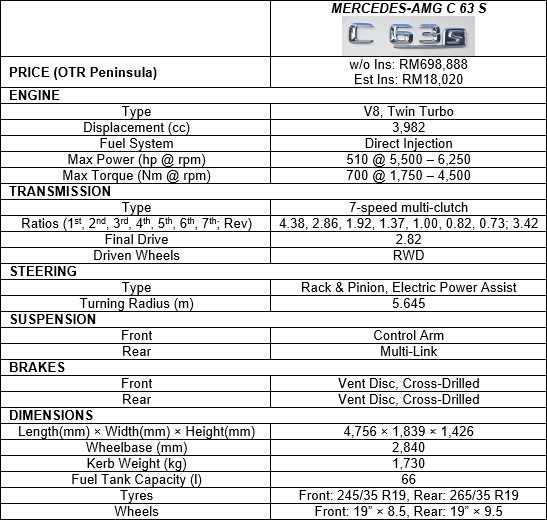