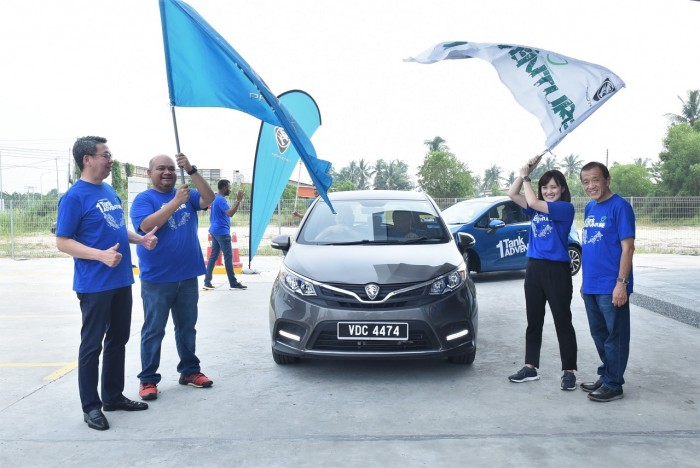 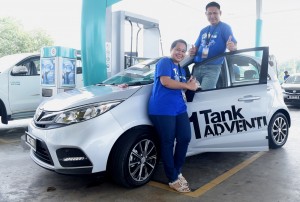 The weekend before last, the Proton 1 Tank Adventure covered Sabah for its second leg, taking participants on a scenic 525 km journey from Kota Kinabalu to the northernmost tip of Borneo island in Kudat, the town of Kundasang at the foot of Mount Kinabalu, before taking them back to the state capital. While the route allowed the participants to enjoy some truly scenic landscapes, it also delivered a strong message to its owners and media alike, about the performance of the Proton Iriz, Persona and Saga used in the 1 Tank Adventure.

This year’s 1 Tank Adventure was more challenging because of the longer distance covered; last year’s route was only 420 km. Despite the longer route, tougher driving conditions and the need to maintain a high average speed, all three models still managed to deliver impressive results while winning unanimous praise from the participants for the handling, comfort and safety features. 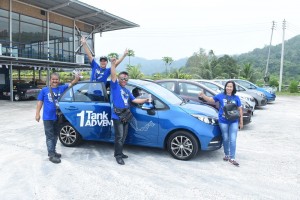 The drive began in the state capital of Kota Kinabalu which is also port city. However, the roads leading in and out of it traverse over Mount Kinabalu’s terrain. Thus, any route that leads inland and away from the coast will invariably encounter steep terrain as the Crocker Range stands as a natural barrier for roads to go over.

The planned route for Sabah’s leg of the 1 Tank Adventure reflected this limitation while also throwing in another geographical feature – the northernmost point of Borneo. Combined, it set the stage for the toughest real world test yet faced by the participants. 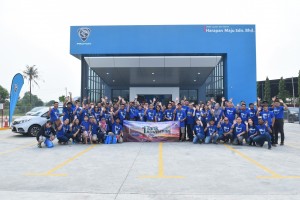 The convoy flagged off from Proton Harapan Maju in Kota Kinabalu, fresh off the 3S centre’s official opening, and returned to Proton Shirba Auto, also in Kota Kinabalu at the end of the journey. All participants successfully completed the 525 km course which is an impressive achievement given that the layout of the roads and heavy traffic encountered along the way challenged the driving skill of every participant. 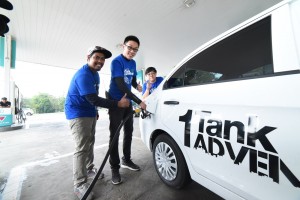 The best theoretical maximum range achieved, based on the 40-litre fuel tank size of the cars used, was 601 km. It is not anywhere near the best theoretical range of the first leg run in West Malaysia (809 km) but it was nonetheless impressive given the mountainous terrain, narrow roads with traffic as well as the need to adhere to a higher minimum average speed to reach checkpoints in time.

Like the first leg, the 1 Tank Adventure participants also got the opportunity to experience of the selling points of Proton cars. Subsequent to the dynamic driving exercise, both media (not exclusive to automotive media only) and public participants praised the secure handling of the Proton models they drove, with many mentioning the Electronic Stability Control (ESC) and Anti-lock Braking System (ABS) of the Iriz, Persona and Saga as notable features. 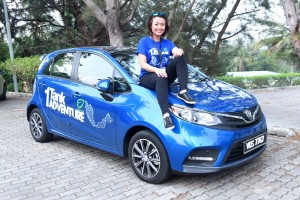 Queennera Francine Francis Kitingan, who is a celebrity radio DJ from Kupi FM, owns a Proton Saga FLX and was amazed by the fuel efficiency, style, stability and features of the new Proton Iriz she drove during the event. “I love my Proton Saga as it is easy to drive and park and has been very reliable, but having tested the new Proton Iriz over the last two days, I think I may have a new favourite Proton model. I really like the way it looks and drives because it feels secure yet fun. I also love the intelligent infotainment system as there are so many songs for me to choose from while the fuel economy is truly surprising. I would not hesitate to recommend this car to anyone as I think it’s very impressive,” she said.

Commenting on the successful completion of the second leg of Proton 1 Tank Adventure, Dr. Li Chunrong, CEO of Proton said, “The Sabah leg of this year’s 1 Tank Adventure was very challenging but we were confident of everyone completing the course safely. The participants also had an opportunity to test their cars in driving conditions that would allow them to experience the safety equipment and dynamic abilities of their cars, which proved that our cars offer the best value and driving experience among all vehicles in their class.”