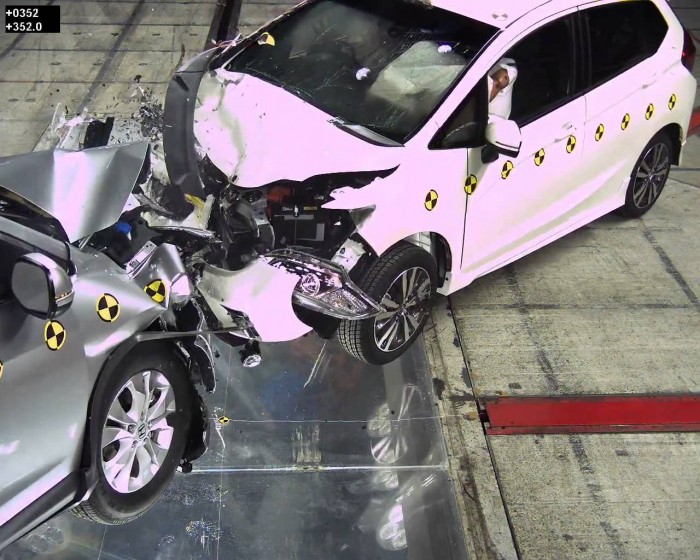 Besides visiting the ongoing Tokyo Motor Show, our trip to Japan with Honda last week also included various other showcases and demonstrations of its latest research and development. One of the things we got to see was a live head-on crash test in which a CR-V and Jazz were rammed into each other in an off-set crash test with both vehicles accelerated to 50 km/h.

The test itself was all over in a split second, and but was not a sight which we would forget quickly, thanks to the deafening sound it generated. The event was recorded on several ultra-high speed video cameras mounted all over the facility, and footage recorded from those cameras have been edited by Honda and made available for us to share with our readers, albeit without audio, unfortunately.

As we can see from the video, the passenger cell of both vehicles remain intact, and when we inspected the carnage, we found that all vehicles doors could be opened. Of greater significance was the fact that the Jazz body could take the impact against the larger CR-V and still maintain an intact passenger cabin.

Honda prides itself on its design of its ACE (Advanced Compatibility Engineering) body designs that have special sub-structures and parts that are designed to absorb crash energy so as to cushion the effect of a crash, yet have a strong cabin that will protect the vehicle occupants. One of the concerns of Honda engineers is the issue of a smaller car meeting with a larger vehicle – which is why we got to witness a crash between a CR-V and a Honda Fit/Jazz.