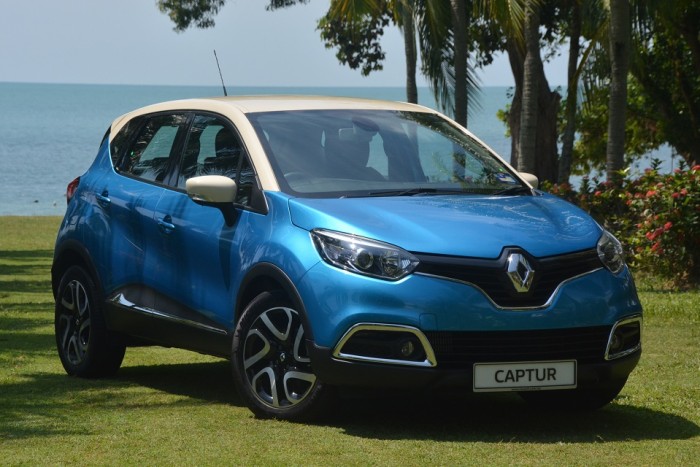 With crossovers generally gaining popularity at exponential rates, we unsurprisingly find many manufacturers converging at the B-segment end of the market, where affordable alternatives could be provided to those eager to make the step up but couldn’t quite meet the budget required for a CR-V.

Honda, notably, has created a storm in this segment with the HR-V with firm plans in place to reach further down the market with the even cheaper BR-V. Mazda is set to add its own SkyActiv-flavoured CX-3 to the equation, whilst Renault has also joined the party recently with the rather intriguing Captur. 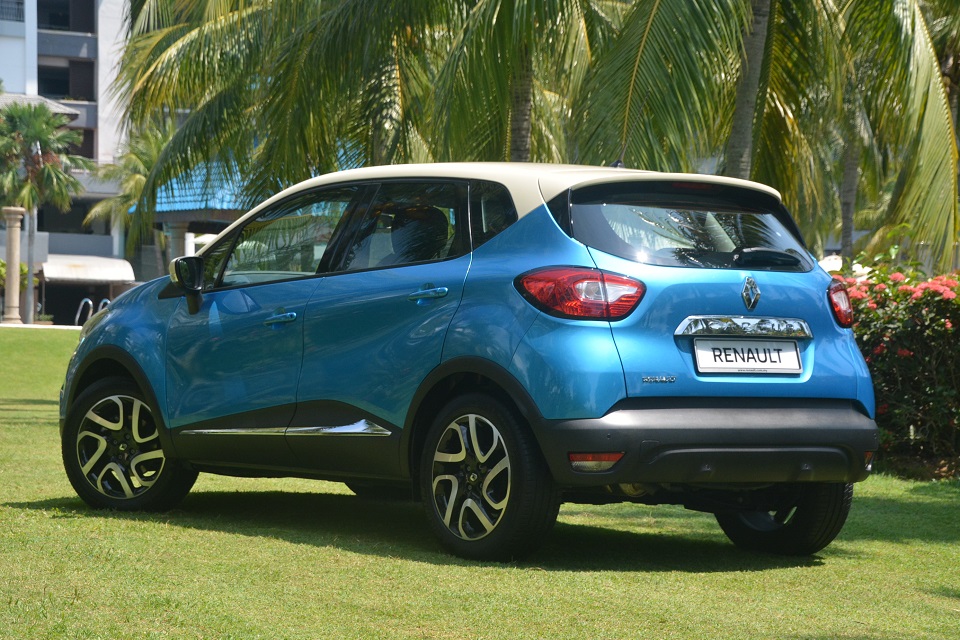 Only one variant of the Captur is on offer in the Malaysian market, and it features a 1.2-litre turbocharged four-cylinder powerplant driving the front wheels through a 6-speed dual clutch transmission. With insurance, it sets your bank account back by a sum RM126,634.99. It’s pricier than the top-spec HR-V, although the difference is relatively negligible in monthly terms.

Whilst mechanical variation is limited, Renault does offer the Captur with an interesting selection of dual tone exterior colours along with removable seat covers. It goes along similar themes as MINI or Citroen DS vehicles in providing the vehicles with bright cheerful colours. We should also point out that besides allowing easy customization, the removable seat covers have hygiene benefits, as they can be easily removed and washed.

Equipment on offer covers the necessary basics, with safety taken care of by front and side airbags, stability control, and ISOFIX mounts. An integrated seven-inch touchscreen provides reverse camera, navigation and connectivity via AUX, USB, and Bluetooth. Lastly, keyless entry is provided with walkaway self-locking function i.e. the vehicle auto-locks when it detects the key fob moving a certain distance away from the vehicle. 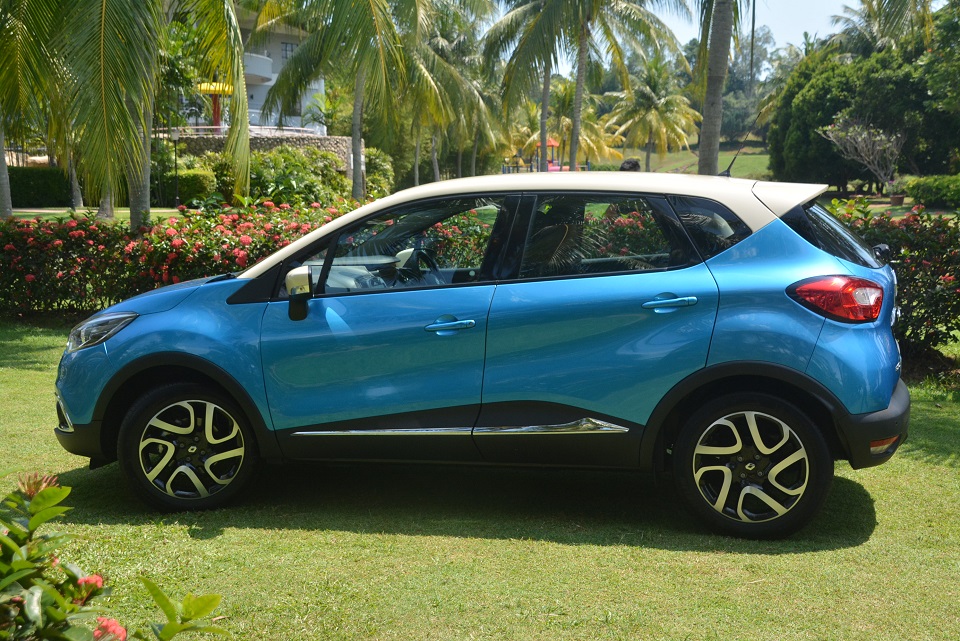 In keeping with current engine trends, the Captur is powered by a downsized turbocharged direct injection engine allied with a dual clutch transmission. Claimed to match 1.8-litre outputs with just 1.2-litre displacement, the TCe 120 variant as offered in Malaysia pushes out 118hp at 4,900rpm and 190Nm at 2,000rpm.

Like its segment peers, the Captur is exclusively front-wheel driven and has a torsion beam to prop up its rear axle. Braking is provided by a disc/drum combo and its power-assisted steering provides an impressively tight turning radius of 5.21m with 2.6 turns lock-to-lock. 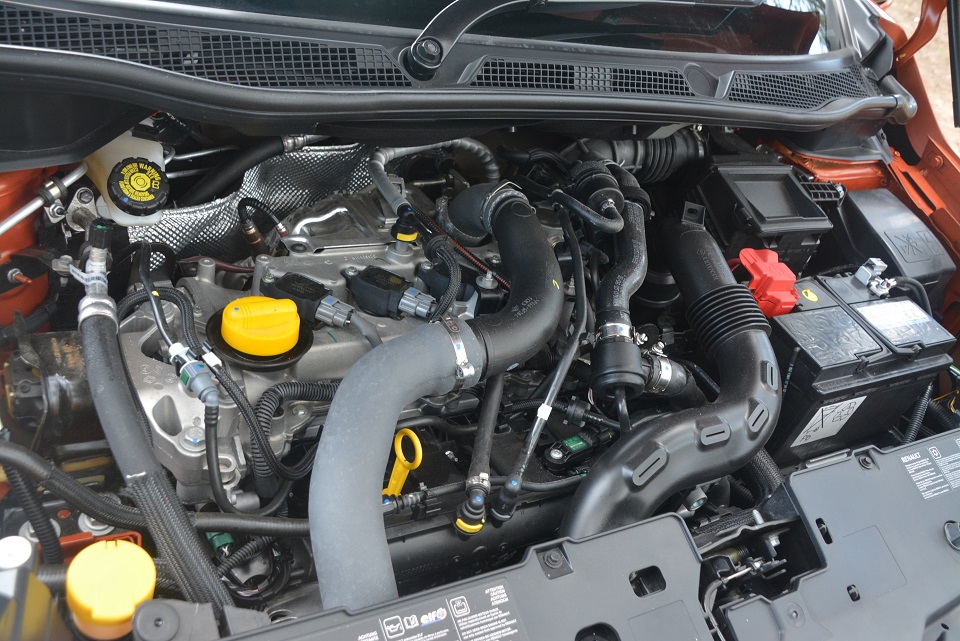 The two-tone paint jobs provide the Captur with the basis for a striking appearance, and that is reinforced by bold styling cues such as the enlarged brand emblem up front, sharp-looking 17-inch alloys, and thick lower claddings.

Bumper-mounted LEDs provide daytime running illumination, but the standard halogen projector headlamps puncture its upmarket illusions with the yellow tinge of its illumination.

Body panels are very intricately shaped, the doors are sculpted with a wavy surface that even cars twice the price may find fanciful. It adds wonderful detail to the design, but for buyers of the segment, you’ve gotta wonder about potential accident repair costs. There are no sharp crease lines, however. 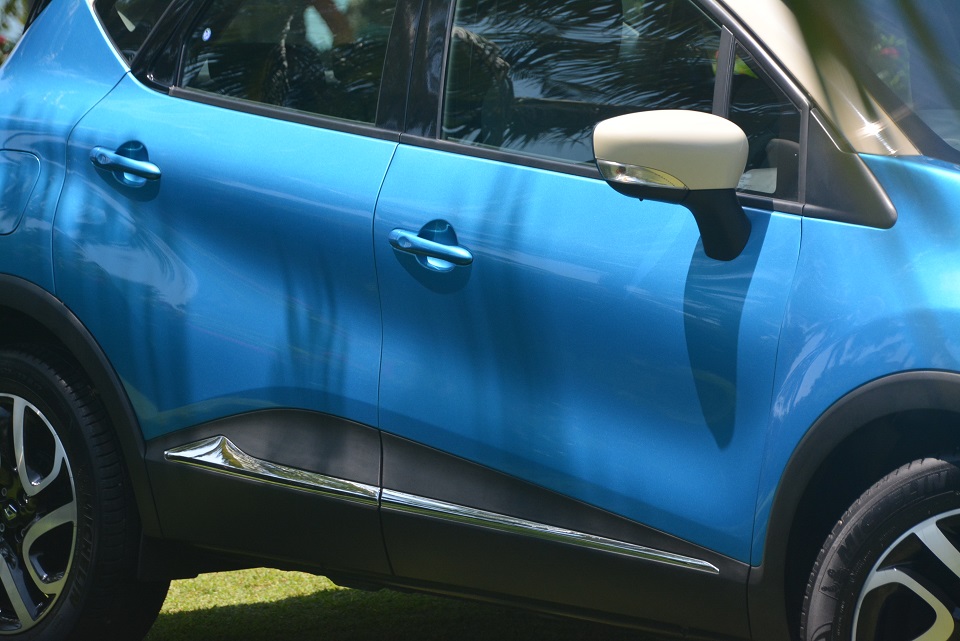 Renault interiors typically exhibit unusual ergonomics, and the Captur is no different. Whilst it’s easy enough settling into a good driving position, locating controls at first acquaintance with the vehicle may prove tricky.

Similar to what we’ve seen earlier in the Fluence and Megane RS, audio controls for the driver is placed on a stalk behind the steering wheel, which in turn houses buttons only for cruise control. Activation of the cruise control system itself is enabled by a button oddly placed on the centre console.

Overall quality of the cabin is decent, however, and there is a usable amount of space on offer to store small items. The centre console is intelligently partitioned for cubby holes, cup holders, and a foldable lidded box. 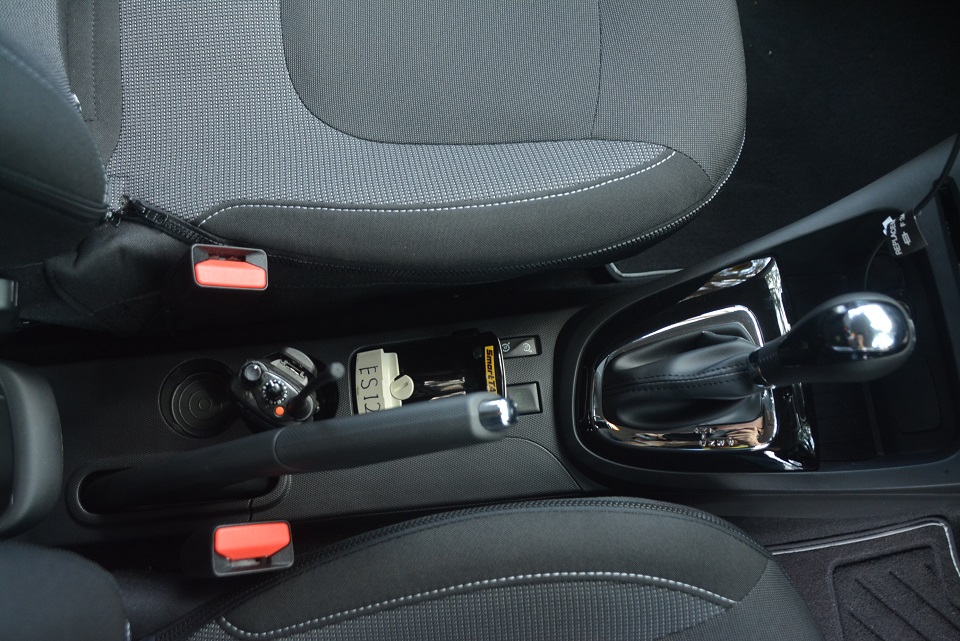 When a car maker emphasizes words like economy and efficiency in its communication materials, it also serves warning of the inevitable compromise in straight line performance. Turbocharged or otherwise, the reality is that we have 118 horses pulling 1,180kg of kerb weight, translating to a power-to-weight ratio that is little better than a Proton Persona.

So, don’t expect blistering acceleration; but you can look forward to parsimonious fuel economy. A fuel economy challenge conducted by local distributors TC Euro Cars for members of the Malaysian motoring media yielded numbers between 4.9 and 5.6 l/100km (trip computer indicated) on highway conditions with air-conditioning switched on. In the real world, we predict figures anywhere between 6.0 and 8.0 l/100km to be within realistic reach of most drivers. 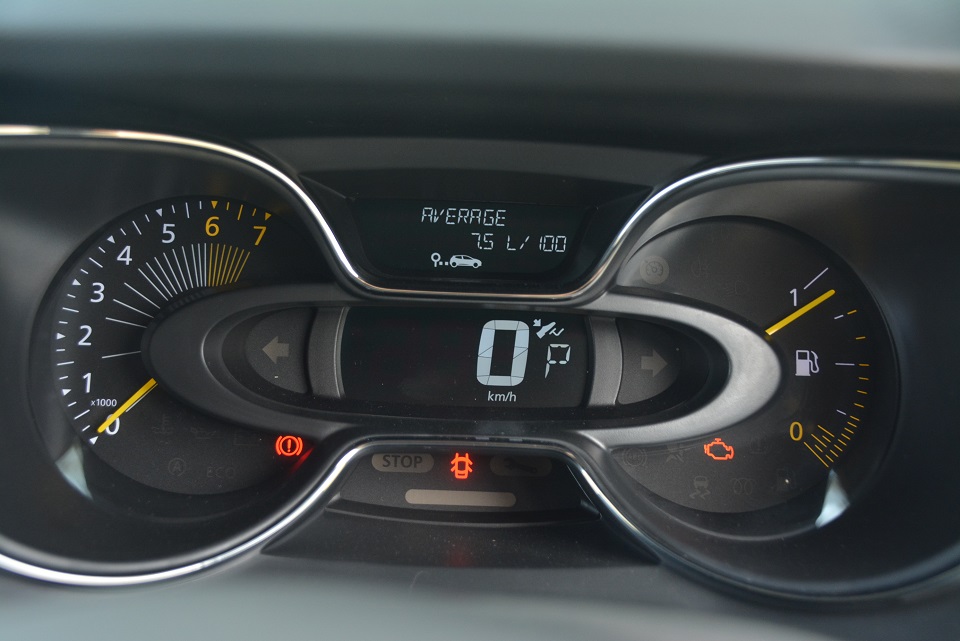 Chassis tuning is appropriately geared toward facilitating easy day-to-day use. On winding roads, there is a sense of fluidness in its weight transfer that returns smooth steering and throttle inputs with accordingly smooth progress. It doesn’t make to much of an effort to disguise its raised height, however, and high speed stability is adequate up to speeds of only 130-140kph after which the engine starts to run out of breath anyway.

Ride is surprisingly firm, however, and might even be judged as harsh for the crowd that Renault targets to sell this car to. Whilst the suspension does well enough to isolate long surface undulations, sharper disturbances aren’t dealt with quite so effectively. 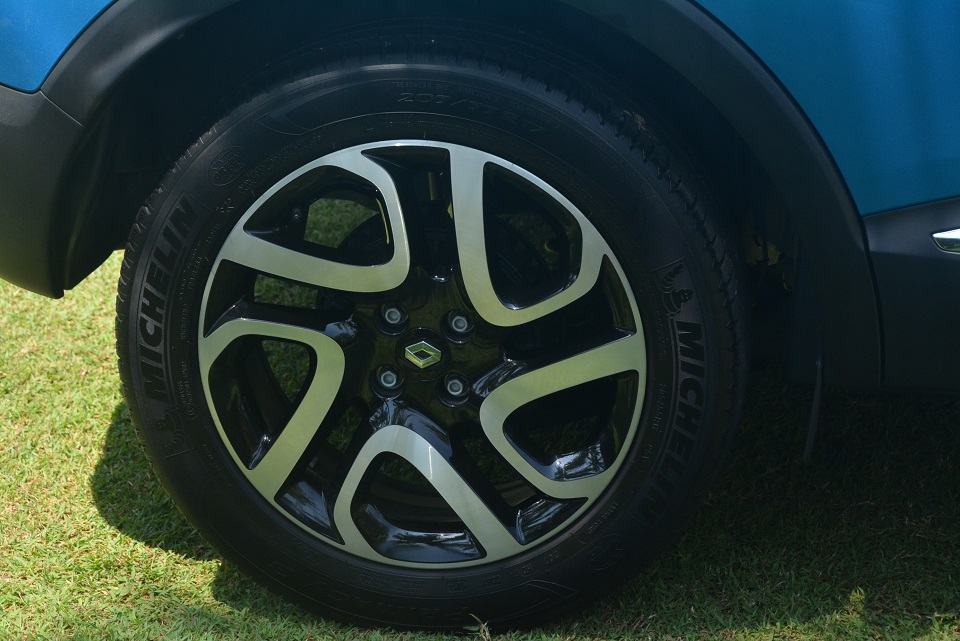 Design will be the Captur’s main selling point. Its selection of bright colours combined with a cheerful design, in our estimation, should make it a hit with hipster buyers shopping at Honda HR-V budget but would like a different and more distinctive alternative to the mainstream selections. The removable seat covers also open a wide range of possibilities for interior colour customization.

Strip the design appeal away, however, the Captur becomes a rather average product. It drives pleasantly and does not bug with too many vices other than its rather firm ride. Renault’s brand of unusual ergonomics will take some time to familiarize for a first time user, but we expect an owner to get accustomed to it quickly enough that it should not be an issue.

We have no reason to actively discourage you from getting a Captur, but the only reason which you would be really tempted to go for one would be for its looks. But as far as fashion statements go, this is one which you can live with day-to-day. 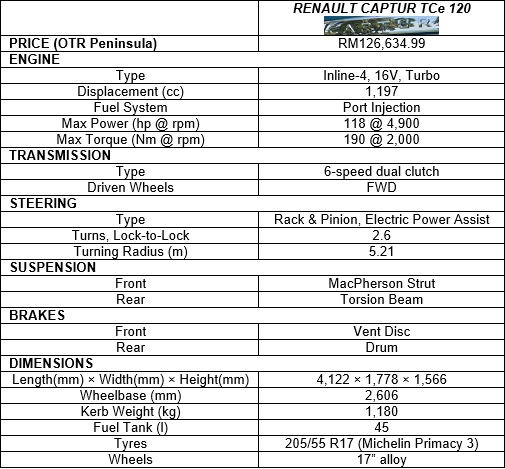