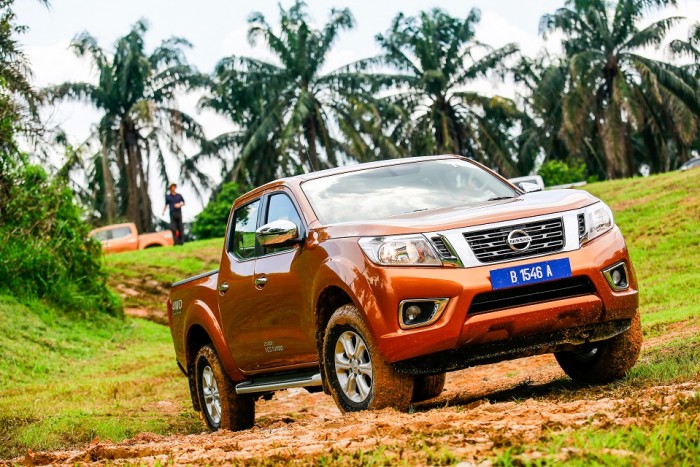 Nissan’s range of passenger vehicles are typically conservative, yet when it comes to pick-up trucks, that reserved nature is casually chucked aside. The previous-generation D40 Navara is remembered for its famously-cheeky ‘Mother Trucker’ tagline as well as its aggressively powerful engine. It was also the first pick-up truck in the market to offer a 6-speed manual transmission and local distributors Edaran Tan Chong Motor (ETCM) were even brave enough to experiment with a King Cab variant.

Succeeding the D40 is the all-new NP300 Navara. Like its predecessor, the NP300 seeks to position itself as a pick-up selling on high performance and a pronounced emphasis on its on-road refinement. The often-used car-like cliche is once again dished out, and the message is reinforced with a number of segment-first features that migrated over from passenger vehicles. 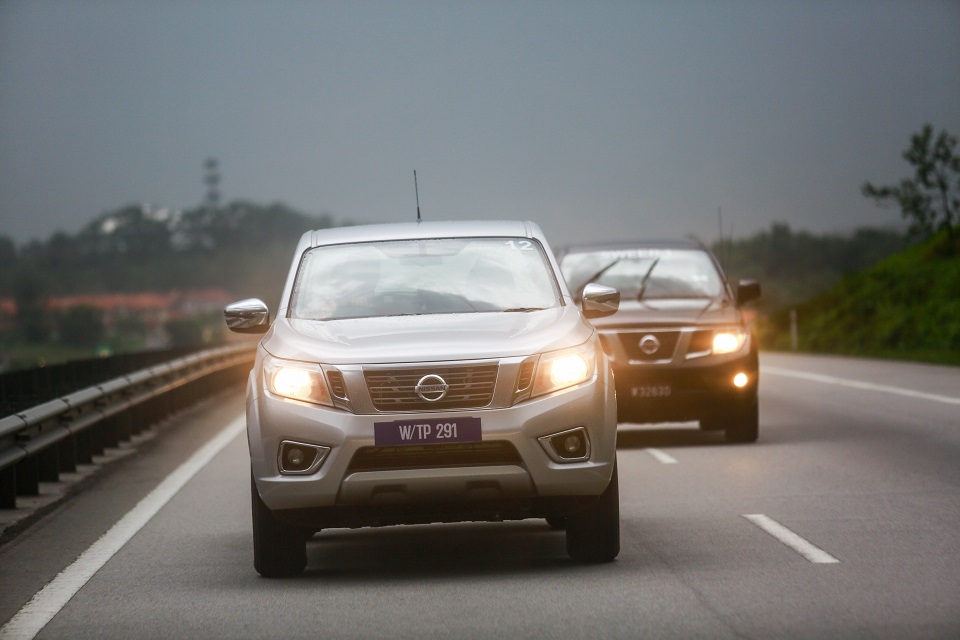 As revealed in pre-launch coverages, the NP300 Navara comes fully imported from Thailand with a selection of six model variants, all with turbodiesel engines displacing 2.5 litres and running part time 4×4 drivelines as standard.

A manual-only Single Cab variant kicks off the range at RM81,818.20 with insurance and unlike single cab variants of rival models or even that of the outgoing D40 Navara, the NP300 Single Cab comes respectably equipped with dual frontal airbags, two 12V power sockets, CD player with Aux-In, multi-info display, and halogen reflector fog lamps with integrated daytime running lights. 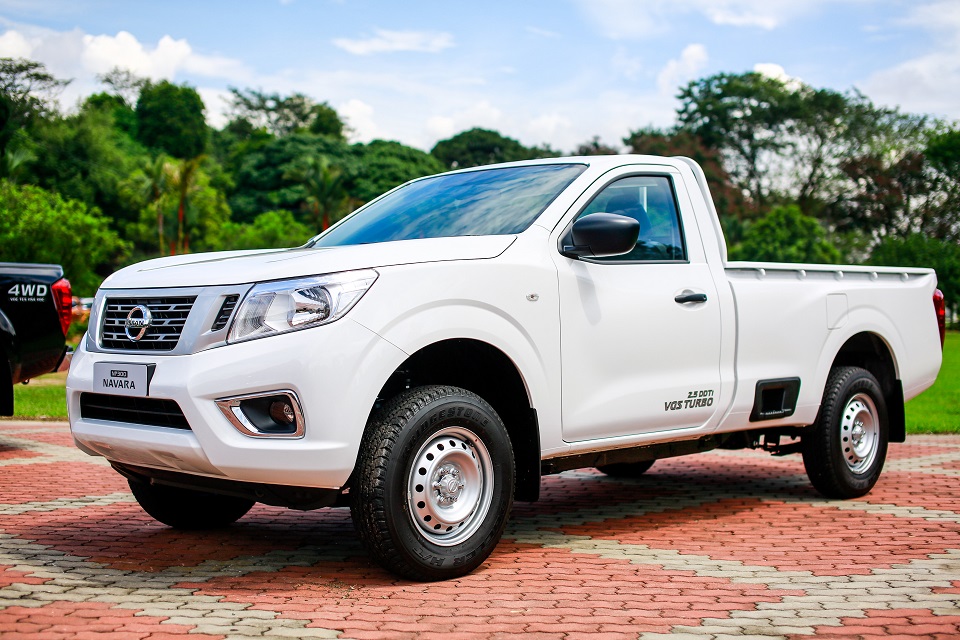 The main-selling variant for private buyers is expected to be the second-from-top V model which, at RM113,181.44 with automatic transmission as standard, adds in keyless entry and reverse camera amongst other creature comforts to the equation. Topping the range is the RM124,484.60 VL model which, in addition to a more powerful engine, also exclusively offers LED headlights, LED DRLs, and leather upholstery. 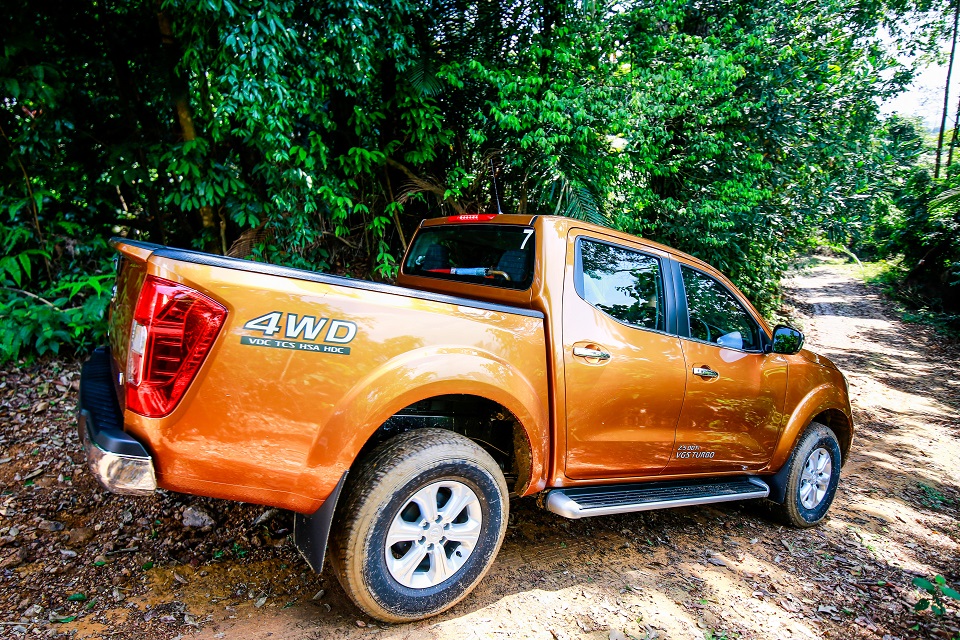 Whilst the trim line-up is wide ranging, the engine and drivetrain combinations on offer are significantly more straight forward. Globally, Nissan debuted an all-new 2.3-litre turbodiesel to power the NP300, but due to its requirements for low sulphur fuel, the ASEAN region carries over the D40’s 2.5-litre YD25 powerplant.

In Malaysia, the engine is offered in two states of tune. For the range-topping auto-only VL model, the four-cylinder mill pumps out 187hp and 450Nm – figures noted as highest among 2.5-litre engines currently available in the market. 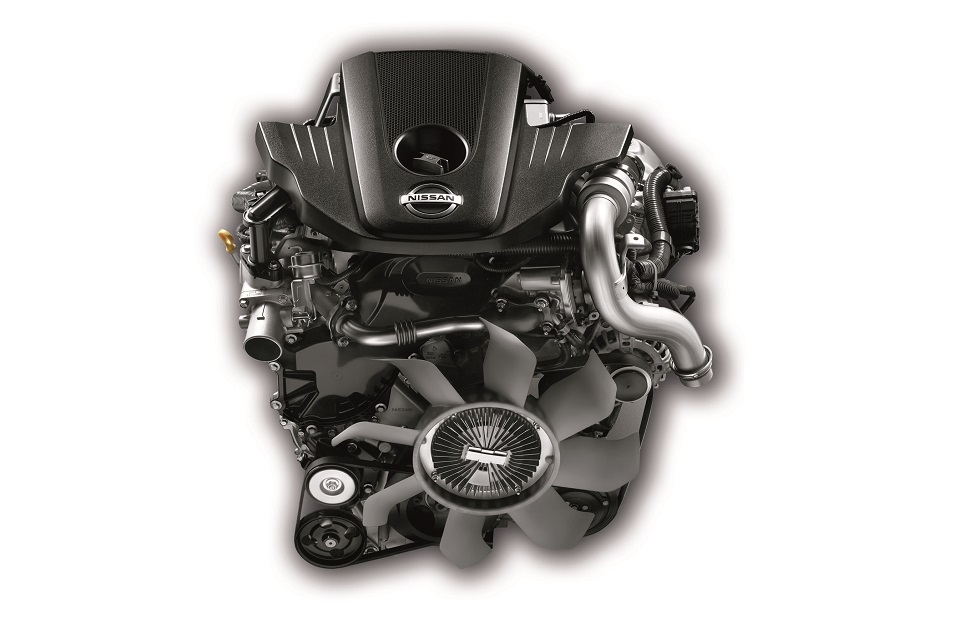 All other variants get a slightly detuned 161hp/403Nm setup. Despite the reduced outputs from 176hp/403Nm previously offered with the D40, Nissan emphasizes that thanks to substantial weight reduction, the 161hp NP300s enjoy better power-to-weight ratios over their D40 equivalents. In V trim as tested, the NP300 has 87 horses for each tonne of kerb weight, up from the D40’s 85hp/tonne.

Shift-on-the-fly 4×4 is standard on all variants. Vehicles with manual transmission get six forward ratios, whilst auto versions get a first-in-class 7-speed gearbox sourced from Jatco, Nissan’s own transmission-making subsidiary.

Another major technical highlight in the NP300 is the implementation of multi-link coil spring suspension on double cab models, first among Japanese pick-up trucks to do so. Nissan claims that despite the perceived superior robustness of traditional leaf springs, the coil-sprung Navara is remains good enough to carry a one-tonne payload. Besides providing superior ride comfort on-road, the more intricate multi-link setup is also claimed to allow longer wheel travel and better wheel articulation over poor surfaces. 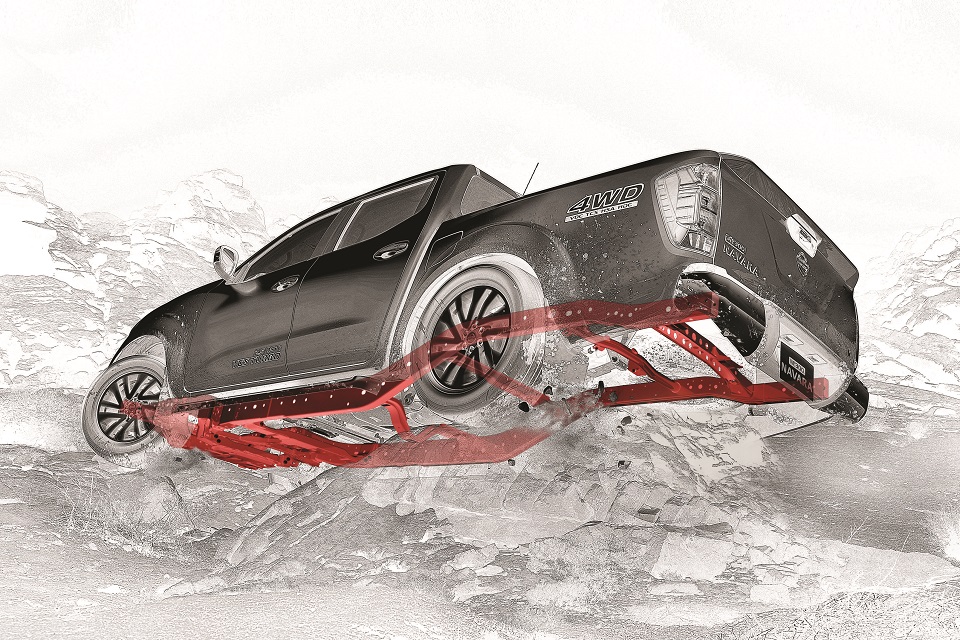 A simple boxy silhouette adorned by a bold face up front summarizes Nissan’s design brief of the NP300’s overall appearance. Chunky yet restrained applications of chrome on the front grille and fog light surrounds create an impression of tasteful machoness, and the LED daytime running lights of the VL model form a visual signature that is unique amongst pick-up trucks.

Details are considerably more subtle along the sides. You get flared wheel arches and gentle crease lines, but nothing sharp or fussy as seen in the Mitsubishi Triton. Nissan makes a big deal about the integrated rear spoiler that is standard on all Double Cab variants; visually, we don’t see a substantial impact, but it is claimed to offer functional aerodynamic benefits in reducing wind swirl over the rear cargo bed.

All Double Cab variants also get side steps as standard for convenient ingress and egress. More thoughtful, perhaps, is the lined step built at the base of the Single Cab model’s cargo bed. Engineered to support weight of up to 250kg, it is placed there for users to step on and reach deeper into the cargo bed whilst retrieving objects. 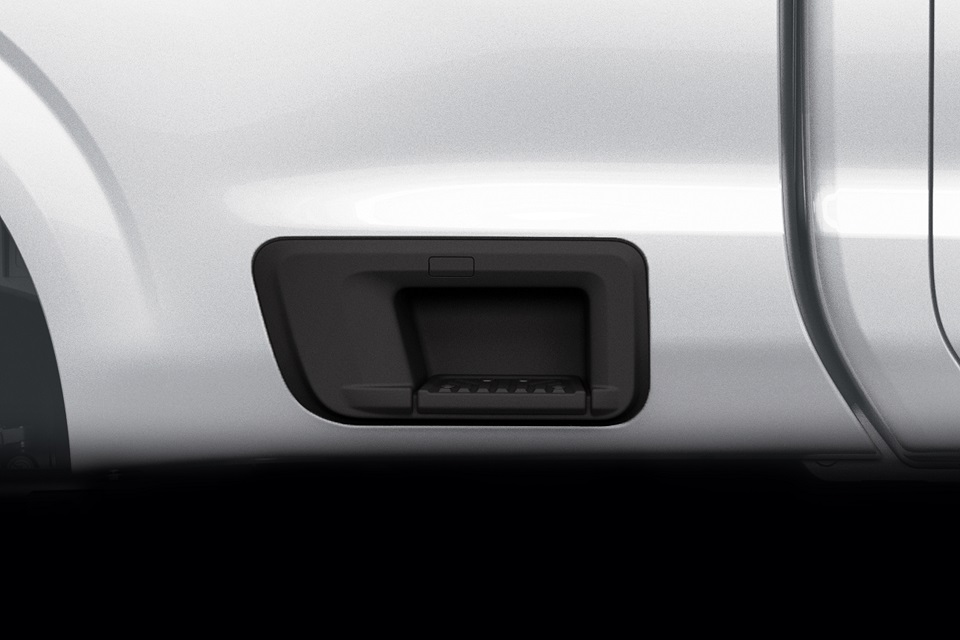 Traditionally, pick-up truck cabins are designed and built with emphasis on ruggedness and durability. Today, those qualities are expected to be maintained whilst at the same time required to come in conjunction with design sophistication and plushness comparable to passenger cars.

The NP300’s cabin will not look out of place if transplanted to a Teana or a Sylphy. Even the base Single Cab model looks respectably finished. If you’re looking for a workhorse but don’t want an interior that reminded you of that fact, this is the truck to buy. 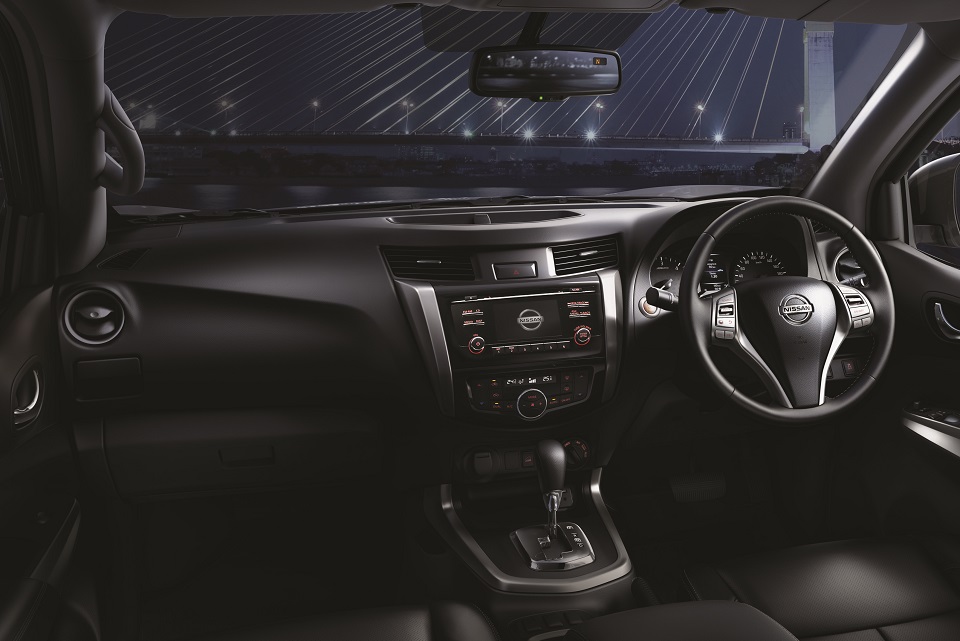 Much of the switchgear appear common with Nissan’s range of passenger cars, and whilst that’s good in elevating the cabin’s perceived quality and ambience, they may be difficult to operate if the driver is wearing a thick pair of gloves – common circumstance for vehicles that serve construction sites or estates. Urban users should face no issues, however.

In-cabin practicality is good. There are deep door pockets and the centre console is well compartmentalized with cubby holes, cupholders, and a lidded box. The top of the dashboard is also usefully carved with a storage tray with a power socket conveniently-placed to power your GPS unit. What we do not fully comprehend, however, is the slot below the passenger side air vent. The way it is angled, any objects in there is one emergency maneuver from being flung out.

Double cab variants cocoon their rear passengers in relatively comfortable surroundings. Besides the benefit of decent leg and head room, cooling is enhanced with rear air-con vents, another first-in-class feature trumpeted by Nissan and standard across the board. Seat belts are provided for three rear occupants, but the centre passenger will have to be mindful of a pair of cupholders placed at his/her feet. 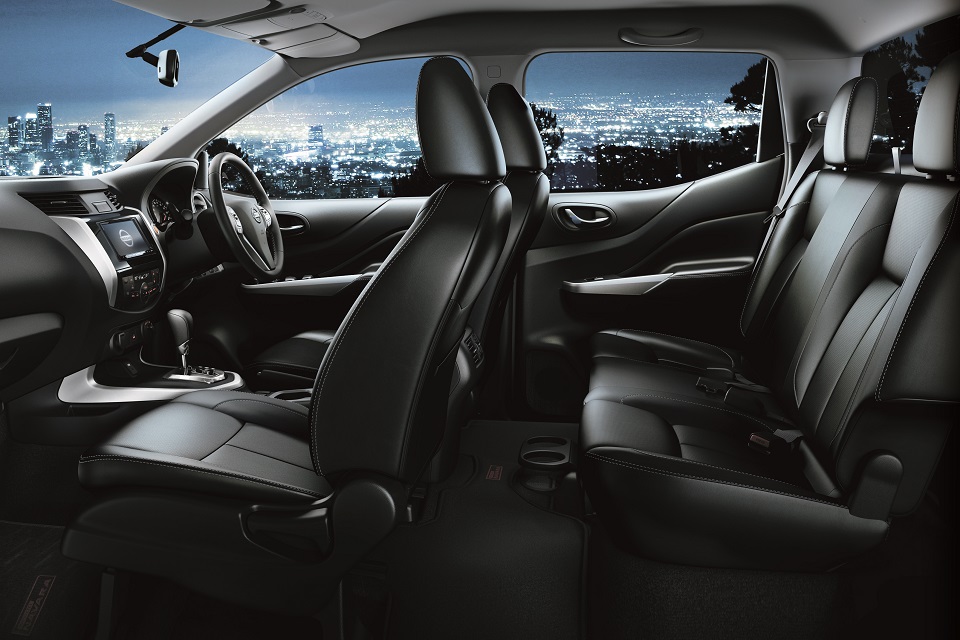 Immediately after its launch recently, ETCM gave us a day behind the NP300’s wheel on a brief journey from Glenmarie to the Malaysian Agro Exposition Park (MAEPS) in Serdang where we got to experience the new Navara’s talents on and off the beaten track. All test cars on the day sported the 161hp engine tune, in line with the company’s intentions to push that variant as the model’s main-seller.

Compared to the outgoing D40 Navara, the NP300 feels noticeably quieter and more refined on the move. The supposed deficit in outputs over the predecessor is also not obvious; lending credence to Nissan’s claim of the NP300 having superior power-to-weight ratio. During the off-road section, we noticed that the re-tuned YD25 engine’s torque feels better distributed toward the lower reaches of the rev range, allowing more effortless climbing of steep slopes. 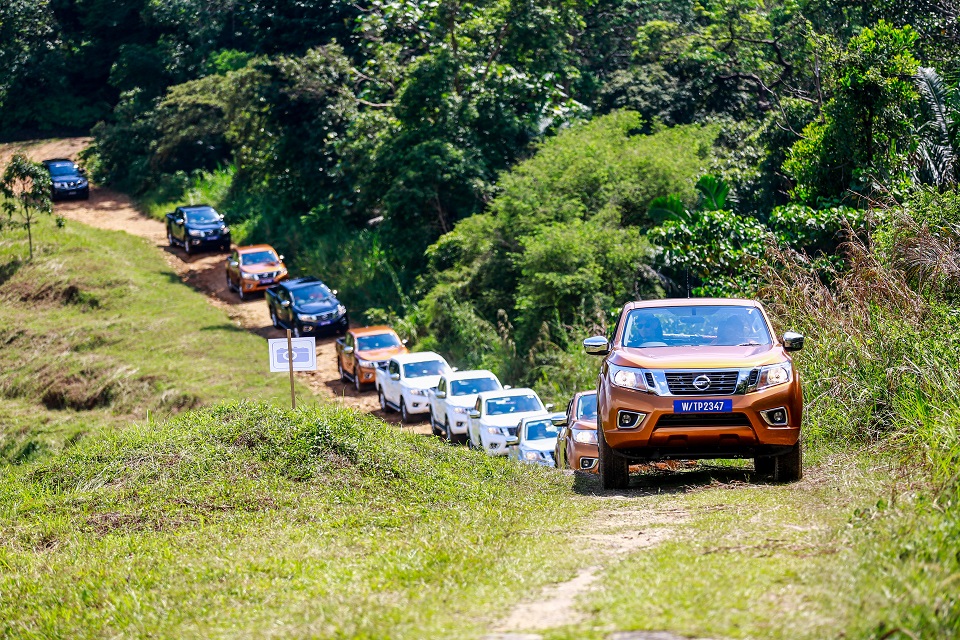 Less convincing, however, was Nissan’s claims of improved on-road dynamics and comfort as a result of the NP300’s adoption of coil spring suspension. In our opinion, the Ford Ranger and Mitsubishi Triton both feel more sure-footed around bends and more pliant over undulations. The setup feels reassuringly rugged off-road, however.

A particularly memorable section in the pre-planned test route involved a sharp descent over a muddy slope. It was designed to be a test of NP300’s hill descent control system, and despite the system’s best efforts, the NP300 was practically sliding its way on the last few metres of the slope. Those last several metres were heart-stopping, but the HDC’s intervention in maintaining the vehicle’s descend speed right from the start of the slope meant that driver control was never really lost. 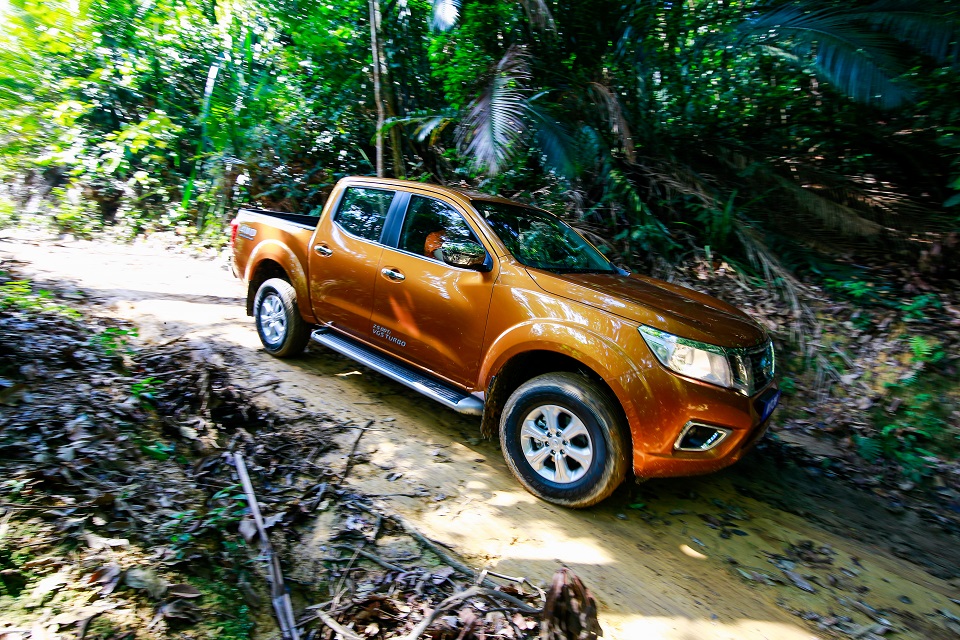 Coming from the D40, the NP300 makes the prerequisite leap in refinement and equipment that elevates the Navara nameplate to be on par with the latest model generations of its rivals. The switch from leaf to coil springs is a notably daring gamble from Nissan, but one that’s not fully maximized – we still find the Ranger and Triton to handle better and ride more comfortably on the road. The use of a 7-speed automatic transmission has definite benefits to fuel economy and highway refinement though.

Availability of safety features such as electronic stability control, ABS, and hill-start assist from the mid-spec variants upwards is commendable, but be aware that quite a number of amenities advertised as key selling points such as LED headlamps, signature daytime running lights, leather upholstery, and electric driver seat adjustment are applicable only for the VL model.

Pricing is not as enticing as we would have liked though. The bulk of the range starting from SE trim upwards resides north of RM100k, leaving the Nissan sales rep with quite a task to pinch sales from the class-leading Ford Ranger or best-selling Toyota Hilux. A full verdict is pending a stint behind the wheel of the VL model, but in V trim as tested, the NP300 is competitive without being fully class-leading. 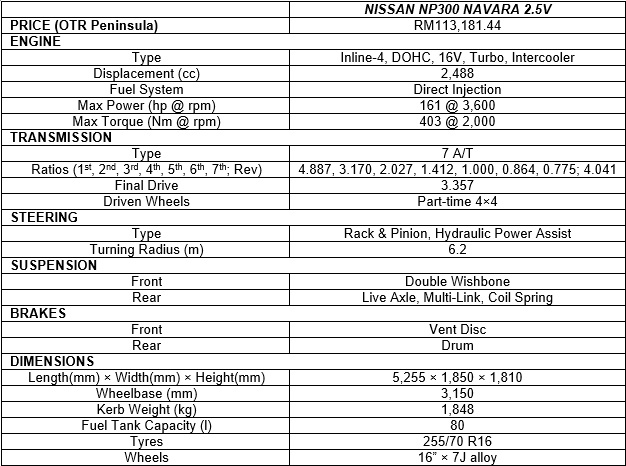