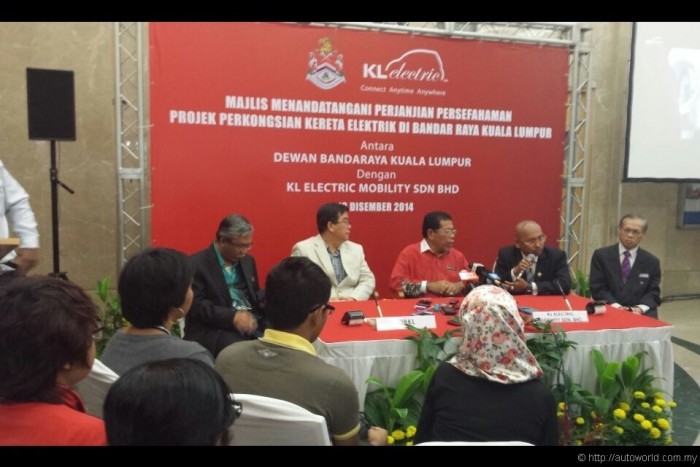 In a memorandum signed between both parties today at KL City Hall, it was agreed that the 3,000 stations will be rolled out within a timeframe of two years from January 2015. The car sharing service covers strategic locations within the golden triangle of KL city centre. Mayor Datuk Seri Hj Ahmad Phesal bin Hj Talib further clarified that discussions are also ongoing with Cohesive Mobility Solution (COMOS) as a concurrent car sharing service provider of electric vehicles.

Helping KL Electric Mobility Sdn Bhd along the way with this scheme is Autolib, a French firm responsible for pioneering a similar project in Paris. Autolib’s fleet in Paris utilizes the Bollore Bluecar, an EV model in production since 2011 but nevertheless less prominent in our part of the world compared to say, the Nissan Leaf or Mitsubishi i-MiEV.

It was not officially confirmed what vehicle would the A-gogo scheme would be using. Official description states only a five-seater electric vehicle with Dato’ Seri Hj Suhaimi further clarifying at the event press conference that the said vehicle would have a range between 220 to 280km depending on usage. The above description matches that of the Bluecar, although official specifications found in Autolib’s website indicates that the BlueCar has no air-conditioning – not exactly suited for Malaysia then, and if an alternate air-con version is to be made for Malaysia, it would most certainly have a shorter cruising range.

Once in operation, the scheme will be offered to users with the option of daily, weekly, monthly, or yearly subscriptions. Users access the vehicle in ‘tag-in-tag-out’ style using an RFID tag and the vehicles are to be parked at any one of the 3,000 charging bays around the city in between usage.