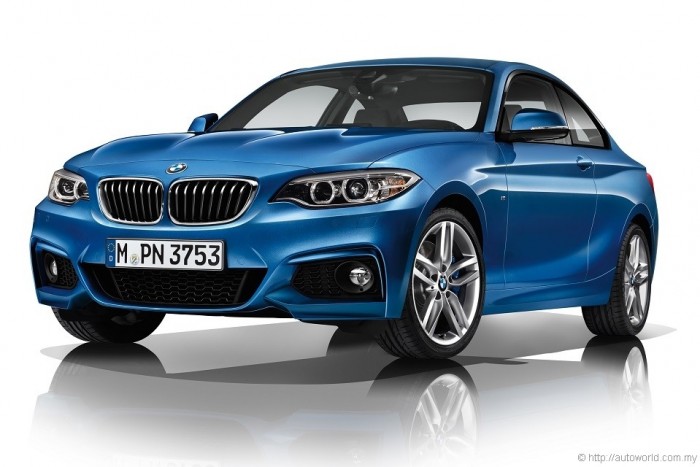 BMW’s all-new 1.5-litre b38 engine, which is already seeing action in the new MINI and 2 Series Active Tourer, continues to make its way across the line-up with the 2 Series Coupe being the latest recipient of the all-aluminium three-cylinder mill.

Seen for the first time in a longitudinal installation, the turbocharged triple powers the 218i Coupe with outputs of 136hp and 220Nm, identical to what’s available in the MINI Cooper. Reports have suggested with near certainty that this engine will be making its way into the 3 Series for the F30’s midlife facelift and possibly even the next generation 5 Series as well. It will also be powering the next generation 1 Series, X1, and a whole generation of new MINI models in its more familiar transverse orientation.

Fitted with its standard 6-speed manual transmission, the 218i Coupe has access to a top speed of 212kph whilst requiring 8.8 seconds for the century sprint; the optional ZF-sourced 8-speed automatic transmission imposes a 0.1 second penalty. Depending on selected tyre size and transmission, rated fuel consumption of the 218i varies between 5.1 and 5.6 l/100km whilst CO2 emissions hover between 118 and 130 g/km.

Above the 218i, BMW has also introduced a new 220d variant featuring the company’s new b47 2.0-litre turbodiesel engine. Launched recently with the facelifted X3 in Malaysia, the 190hp b47 hails from the same family of modular powertrains as the b38. The 220d Coupe is available with both rear- and all-wheel drive, the latter variant officially carrying the designation 220d xDrive Coupe.

We have yet to receive word if BMW will launch the new 218i in the Malaysian market, but if it does, would be keen on trying a 3-cylinder-powered 2 Series Coupe?