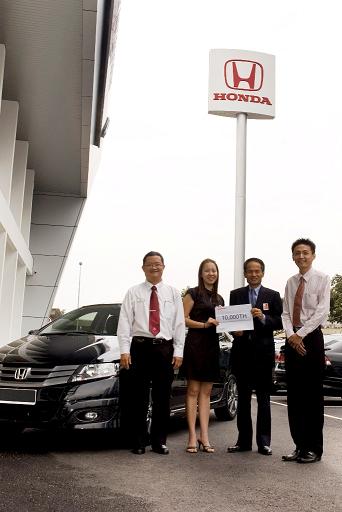 The latest Honda City was launched back in 18 December 2008. Now, just less than seven months later, total sales for the model has reached 11,000 units. The magical 10,000 mark was actually breached less than two weeks ago, and the buyer who occupied that threshold position received something of a surprise party from Honda Malaysia, with none other than HM’s MD & CEO, Mr Toru Takahashi meeting her personally at the branch which she purchased the car, Sumber Auto Sdn Bhd at Section 13, Petaling Jaya.

Thirty-one-year-old Ms Phua Bong Chin must be thanking her lucky stars for signing on the dotted line at the right moment and time, for being customer number 10,000 of the new City, she gets a free 3-day 2-night vacation at the Pangkor Laut Resort, which she chose over a 2-year free maintenance package.

Phua receiving her prize for Takahashi.

“I’ve not been lucky in my entire life, not even in lucky draw and I’m really happy to be the 10,000th City owner,” Phua was quoted as saying after receiving her token. “I will enjoy the holiday courtesy of Honda Malaysia with my hubby,” she said with a beaming smile.

“Honda is pleased to be a well accepted brand in the country. In response to the overwhelming support, we constantly innovate ways to show appreciation towards our customers. This is but a humble initiative for us to express our gratitude to their support.” Mr. Toru Takahashi explained at the miniscule celebration.

Currently with a backlog of over 4,000 orders, the new City accounts for about half of 20,479 cars sold by Honda in the first half of 2009, having registered a 22% growth year-on-year for the said period.

“We thank all our customers for their continuing support and most importantly, their faith and trust in Honda. We hope to be celebrating with our 20,000th Honda City owner soon and perhaps even 30,000th. And thank you to all our business associates for bringing out the best of Honda to the customers.” Mr. Takahashi remarked cheerfully.

In the light of Takahashi-san’s words, those of you considering a City should time your purchases nicely. You never know what goodies you may end up getting.