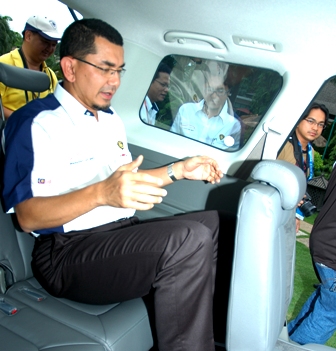 A seven-seater with a genuine Malaysian touch

This picture of Proton CEO, Datuk Syed Zainal Abidin Tahir sitting in the third row of seats is the first photo I show my friends when they ask me about the Exora. Syed Zainal is 5-foot 10 and as you can see from this photo, his knees are not banged up against the back of the second row of seats.

This means that the Exora passes the first test of a seven-seat MPV, it actually seats seven adults.

Lets look at the picture again. Syed Zainal’s knees ends up quite high when he is seated, this is because the footwell is a bit shallow. This is a problem that most compact MPVs suffer, even those that cost twice the money.

As an Avanza owner I can say that the cabin configuration and space of the Exora is superior to the Avanza in nearly every way, except for the third row legroom.

Comapred to the Grand Livina, the Exora is more roomy and has the advantage of having air conditioning vents for all three rows. All MPV owners know how important it is to keep all rows of passengers cool because the kids can really kick a fuss if they don’t get air conditioning. 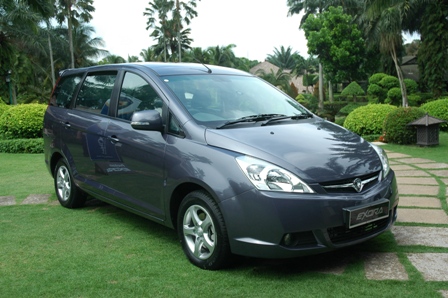 OK. now that we have established that the Exora is a genuine seven-seater, let’s look at the styling. Styling is important because most people judge a car on looks, regardless of what it is. Heck even truck drivers judge trucks on looks.

Personally I like the simple lines of the Exora. Proton said that the angular looks is in keeping with the current automotive styling trend. They are right of course, just look at the chiseled looks of the new Mercedes-Benz line-up and the current Honda styling vocabulary and you will see that angular, masculine is in and soft organic curves are yesterday’s.

Given the tight budget and even tighter deadlines that Proton set for their development engineers, the simple surface treatment is entirely understandable but even with those restrictions the designers made a lot of effort to give the car character.

The semi-clamshell bonnet, dramatic swage-line on the flank and prominent jaw are some of the examples of their effort to make the Exora handsome. Well I think it is a fairly good looking vehicle. 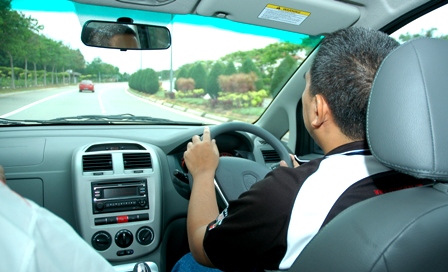 While in the driving seat, we were keen to find out if the 125hp Campro CPS 1.6 has enough grunt to keep the Exora interesting for keen drivers.

In one word I would describe the power output as adequate.

Although we only had a chance to drive the automatic and the route was a shade more than 32 kilometres, it was enough to give us an impression of what the Exora can do.

Even with four near-rugby player size adults on board, the Exora could accelerate at a fairly decent rate and in top gear, the Campro will spin at about 3,400rpm when cruising at 120km/h. Good enough for a relaxing cruise for the obedient.

Those who prefer the excitement of higher velocities, the Exora would easily hit 160 clicks per hour.

The Exora is clearly superior to the Avanza when it comes to performance and would probably match the Grand Livina except maybe at very low speed when the Campro’s torque deficit puts it slightly behind the Grand Livina.

In terms of engine refinement, the Exora is firmly in second place behind the Livina but ahead of the Avanza, which has much taller gearing ratio.

Proton made a lot of effort to spice up the spec sheet and they decided to offer features that are only found in vehicles that are a lot more expensive than the Exora. The key engineering leap that they took was the use of CAN-BUS wiring for the body-control function.

Basically, what this means is that many of the comfort, convenience and security functions of the car is run by a central processor. With more processing power, they could pack a lot more features into the Exora. Features such as the programmable remote locking system, hazard flashing during emergency braking, lane change mode of the turn indicator and auto rear wiper on reverse.

I know these are not ground breaking features but you don’t get them in the two named competitors, do you?

The truth is CAN-BUS wiring is a complicated affair and can cause a lot of problems with a car so Proton implemented it separately from other crucial functions. In more expensive cars, the can bus would run everything from engine management to traction control to the airbag trigger system. This is obviously the best way to maximise the processing power of the electronics but it also means that if the CAN-BUS goes on the blitz, nothing works.

By allowing the engine to run on its own processor and letting the airbag and ABS to operate independently, any fault with the CAN-BUS would only affect the comfort and convenience features and not cripple the engine. 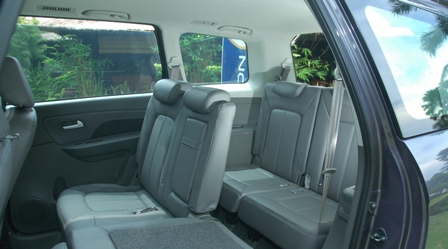 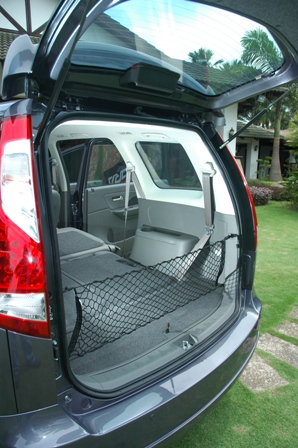 The luggage area is typical of a seven-seater MPV; You can have seven people with overnight luggage  or five with weekend luggage and more.

That said, the straight lines of the exterior means that the limited luggage room when all three rows of seats are up is more practical than the competitors.

The luggage net is nice touch. 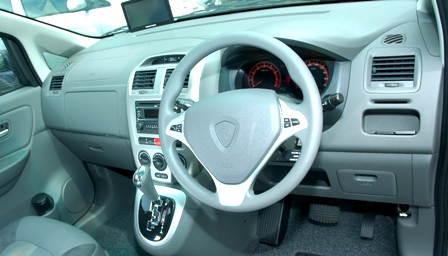 I saved the dashboard picture for the last because I think that it is the most important feature of the Exora, of any car. First impression is that the driving environment is comfortable and blessed with decent ergonomics. I particularly like the position of the gear lever and the lack of obstruction between the two front seats. Now the front passenger can attend to the kids without going down.

VERDICT: I like the Exora and I don’t have any real reservations about the car other than petty details that are down to personal preference. The Campro CPS may be just a 1.6-litre but it loves to be worked hard and gives the Exora decent performance. Please go to the nearest Proton Showroom and give it a close look. It really is a car worth giving your consideration even if you are planning to spend a bit more money. Really.