Another intriguing product making its debut at the Geneva Motor Show is the coupe version of the W212 Mercedes E-class, set to replace the outgoing W209 CLK. Five engine choices have been lifted from the sedan, but there’s no mention of the 4-MATIC all-wheel drive option available on the E350 and E500 sedans.

The styling of the coupe features subtle reworkings of that on the sedan to give a more aggressive appearance. However, the same quad trapezoidal headlights up front, ensures that we make no mistake of its lineage. Mercedes engineers have worked the body of the E coupe to a silky smooth Cd of 0.24 – the lowest in a series-production car. Other features lifted from the sedan version include drowsiness detection, active bonnet, and adaptive main beam assist.

Ride and handling is aided by AGILITY CONTROL, which automatically adjusts the suspension to suit road travel conditions, with the Dynamic Driving Package allowing suspension setting to be adjusted at the touch of a button. Mercedes are already taking orders in Germany, with prices starting from �44.7k to �66.0k.

The optional AMG Sports package can be specified to add a sporty aura to the E-class coupe, with reshaped bumpers, side skirts, 18″ alloys clad in 235/40 (front) and 255/35 (rear) tyres. Handling is also enhanced with a stiffer suspension setup, perforated discs and�the speed-sensitive steering tuned for a sporty drive.

For the initial batches of the model, the E-class coupe will also be available in a special Prime Edition. It offers palladium silver metallic paint, panoramic glass sliding roof, and special 18″ AMG alloys on the outside, while the inside is trimmed with two-tone leather upholstry, and sports pedals with�brushed stainless steel. Naturally, the styling of the E-class coupe is subtly reworked from the sedan. The quad trapezoidal headlights instantly identifies it as a W212 brethren. In between them, the radiator grille sports the enlarged three-pointed star, a tradition of all Mercedes coupes. Along the flanks, we see an obvious re-interpretation of the sedan’s lines for a two-doored body. Like the sedan, the shoulder and waist lines rise rearwards to meet the bulging rear-wheel arch as a tribute to the old Ponton Mercedes. The B-pillars are omitted, with only a thin strip separating the front and rear windows. 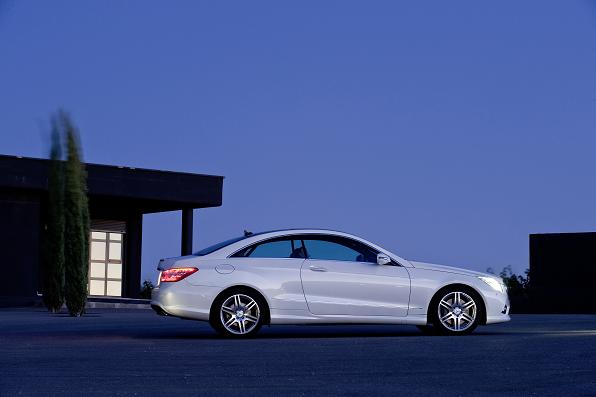 This shot shows a resemblance to the Volvo C70

The rear styling has been similarly reinterpreted, giving a more aggressive touch to the sedan’s conservative look. The taillights, while retaining a similar overall shape, has been made to look wider and sit lower, closer to the bumper. The third brake light has been moved to the trunklid, like in the W203 C-class and the W211 E-class. The overall styling effect gives the Coupe a more aggressive looking rear, but at the same time retaining an unmistakable resemblance to the sedan. Press release pictures show a different dash between the sedan and coupe, with the most obvious difference being the coupe not getting the steering column mounted gear lever like the sedan. While the instrument binnacle and basic architecture remains the same, the differences are sufficiently obvious to create a separate identity for both variants. Most amusingly, if you notice closely, the central air-con vents of the sedan has a smiling shape, whereas the vents of the coupe has a frowning shape.

Like the sedan, the internal conditions of the car are kept in check by the standard dual zone THERMATIC climate control system, with the triple-zone THERMOTRONIC system available as an option. The THERMOTRONIC allows occupants to select between Diffuse, Medium or Focus mode for air distribution in the cabin. As you would expect�at this level, the seats are electrically adjustable, but memory function is a cost option. Lumbar support is four-way electropneumatically adjustable, and the backrests feature what Mercedes calls, without elaborating it being electrical or mechanical, the Easy-Entry function to help passengers get in and out of the rear seats. In addition, the front seats can also be specified with active ventilation and multicontour function with inflatable air chambers in the seat cushion and backrests. Rear passengers get individual seating with backrests foldable to increase luggage carrying capacity of the boot. As expected, the drivetrain combinations available in the E-class coupe are lifted straight from the sedan, but with fewer options available. Here, the range starts with the E250 CDI & E250 CGI. The E220 CDI offered in the sedan is not available, and neither are any of the 4MATIC versions, which means that they are all offered only in RWD form.

Powering the E250 CDI BlueEFFICIENCY is a four-cylinder turbodiesel featuring third generation common-rail direct injection. Fuel consumption is rated at a very impressive 5.3 litres/100km, with CO2 emissions at 138 g/km. These figures are achieved with little compromise to performance. The engine is still good for 204hp and 500Nm, well within striking range of the BMW 530d, which produces 215hp and 500Nm.

The other four-cylinder unit in the range also goes with the other 250 badge, in the form of the petrol-powered�E250 CGI BlueEFFICIENCY. Here, we get the same amount of power as the CDI version, 204hp, but will have to make do with a 190Nm torque deficit, being rated at a ‘lowly’ 310Nm. Fuel consumption and CO2 emissions are rated higher than the CDI version, at 7.0 litres/100km and 164 g/km respectively.

Moving up the range, we have the 231hp V6 turbodiesel of the E350 CDI BlueEFFICIENCY, also featuring common-rail injection, and producing a useful 540Nm of torque at 2,400rpm. The�petrol 350, the E350 CGI BlueEFFICIENCY, has spray-guided direct injection system, and produces a healthy 292hp and 365Nm. Finally, on top of the pile is the E500, with a 388hp/530Nm petrol-powered�V8 under its hood.

The E-class coupe gets most of the goodies found on the sedan version, which also happens to turn the it into an ‘intelligent partner’ like its four-doored brothers, ‘able to see, feel and react reflexively in critical situations and, if necessary, act independently if the the danger of an accident is acute’. Among things lifted from the sedan�include ATTENTION ASSIST, PRE-SAFE, adaptive main beam assist, Brake Assist PLUS, DISTRONIC PLUS, and active bonnet – all designed with the objective of making the E-class coupe a safer car in mind.

ATTENTION ASSIST monitors 70 different parameters via a steering angle sensor to detect driver drowsiness and accordingly displays warnings on the instrument panel warning the driver to swap or stop for coffee. Adaptive main beam assist automatically adjusts the headlights to avoid glaring head-on traffic and provide maximum illumination ahead, an unnecessary, though pleasant convenience to have. The list goes on, and they are all good.

Unfortunately, in my eyes at least, Mercedes has also included systems that take the driving out of the driver. For a few years, we already have the radar-based cruise control on the S-class trickling down to the E. Now, the boys in Stuttgart have taken it up a notch with PRE-SAFE braking, which slams the brakes for you when it decides that a collision is imminent. While there’s no doubt of Merc’s intention to make its cars as safe as possible, but I firmly believe that electronics should only serve to aid the driver, and not directly do the driving.

Otherwise, the array of safety equipment in the E-class coupe include seven airbags, seat belt pre-tensioners and active headrests as standard. In the unfortunate event that you smash the front end of your E-class into something, Mercedes has incorporated four independent impact planes into the forward crumple zone to direct collision forces around the passenger cell, isolating you from the brunt of the bang. The active bonnet would also raise by 50mm, which would offer some protection to the ‘something’ that you’ve just rammed into, very useful if the ‘something’ was human. If you see this coming at you, don’t worry too much. Mercedes has done its best to protect you!

The ride and handling package is another barrage of electronic wizardry fromMercedes. Rather than sophisticated wishbone or multi-link setups, the E-class coupe’s suspension setup is all about AGILITY CONTROL, which automatically adjusts the damping rates to match driving situations. The standard setup for the system is for comfort, but customers can specify a sportier mode of the AC for their cars.

If the above proves insufficient, the dynamic handling package moves the game on with individual control of each shock absorber during dynamic conditions. It features Comfort and Sport driving modes, which alters not only the suspension setup, but also throttle and transmission response. Also included in this package is a speed-sensitive steering, with a ‘more direct ratio and variable centring’. What’s that? Well, you can’t expect Merc to call it active steering, right?

Are we getting it?

Like the CLK before it, we can expect Mercedes-Benz Malaysia to bring in small numbers of the E-class coupe. It is unlikely to sell in sufficient numbers to justify CKD operations, so it will be fully imported and priced in the RM600k range. Keep your fingers crossed for a mid-2010 launch date. Don’t expect this to happen in real life.