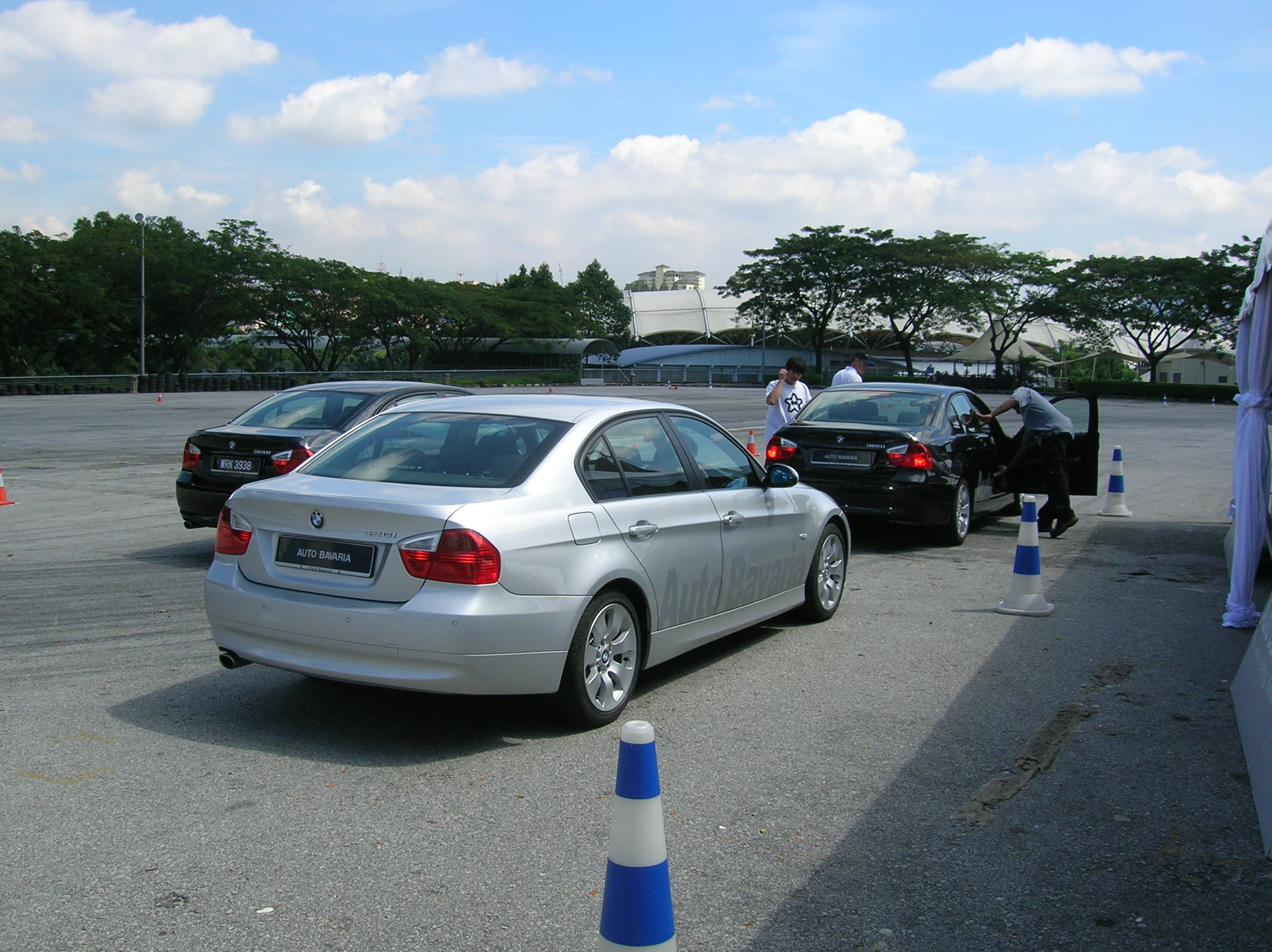 I approached the Sg Besi edition of Auto Bavaria’s 20th anniversary  celebrations with a little less enthusiasm than used to give to BMW events. In fact, I almost decided to give it a miss.

As a result of the 3-series facelift launch happening just two days earlier., all that was on display were the 323i, the 325i Sports and the 335i Coupe. It was most unfortunate that none of the new variants were available for test driving – especially the 335i.

I was approached by a saleslady whom I shall only identify as Ms M. The two of us enjoyed a brief but pleasant conversation, exchanged name cards, and walked away from each other.

As I was heading to my car Ms. M called out from behind. She was going to ferry two gentleman (one with his son) to the BMW Performance Drive and invited me to come along. We headed off to Bkt Jalil in a 523i SE…

*and now, the conclusion…*

As we arrived at the National Stadium’s car park at Bukit Jalil, our eyes were fixated to our left as we saw a tent, some cones and three pre-facelift E90 320is parked in the periphery. These three cars, over the course of two days during the last weekend were to be driven over and over again as hard as the participants of the BMW Performance Drive could muster.

The idea behind the BMW Performance Drive is to allow participants to (I won’t say push) scratch the upper limits of a BMW car in a controlled environment. I have already tried the Performance Drive once before writing here in AW Blog, but in the interest of motoring journalism, I was at it again, this time to write about it.

There were three exercises in store for us, the braking test, the emergency lane changing maneuver, and the slalom course, all designed to demonstrate (read: showoff) the dynamic capabilities of the humble 320i.

Only two participants are allowed a go at any one time, each taking the wheel of one of the cars, while the instructor demonstrates the moves with the remaining one. Inside each car is a walkie-talkie, where the instructor communicates his instructions to the drivers, and also giving his comments on how we should improve. Most of the time, he just tells us to whack the car harder – I was only too happy to comply on this one.

These three cars had a really long weekend 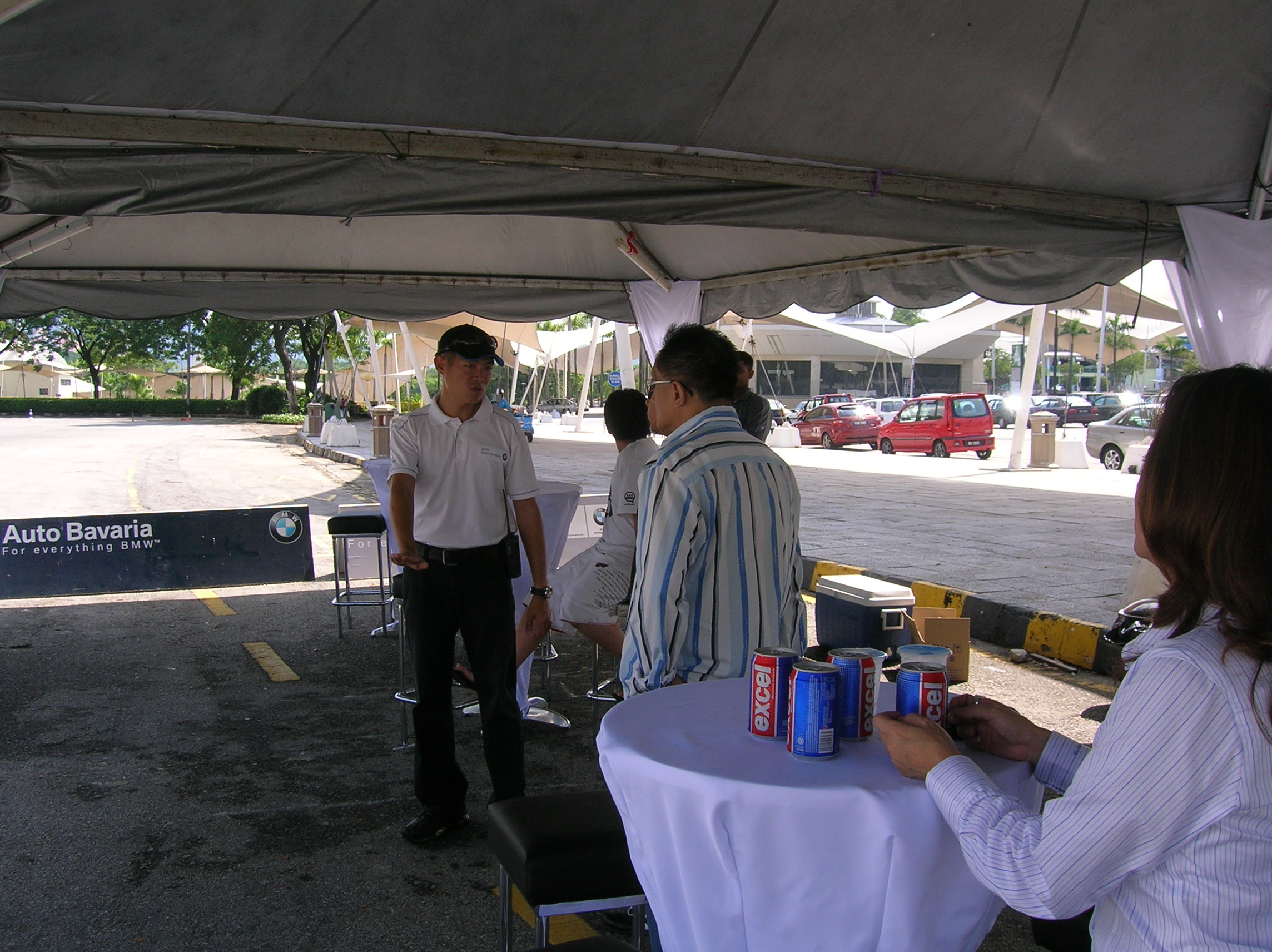 The first exercise was relatively straight forward. It’s purpose was to demonstrate the retardation power of the car’s braking system. We were asked to accelerate full throttle for about 60 – 70 metres towards a cluster consisting of four pairs of cones arranged in a rectangular pattern. As soon as our cars pass the first pair of cones, we were slam as hard as we can on the brakes.

Done properly, the car should come to a complete stop between the third and fourth pair of cones, without so much of a hint of drama from the outside. Inside, the driver should feel a slight judder coming from the brake pedal, which is to be expected.

At the de-briefing, the instructor made sure to inform us that when we suddenly yanked the pedal, the car’s ABS was causing the brake pads grip and release the brake discs 18 times per second compared to the usual (he claims) 8-10 times per second for most mainstream cars.

It was interesting that, on that same afternoon, I had to call on the services of the ABS on my Waja when a car suddenly cut into my lane. Fortunately, it worked just as well! 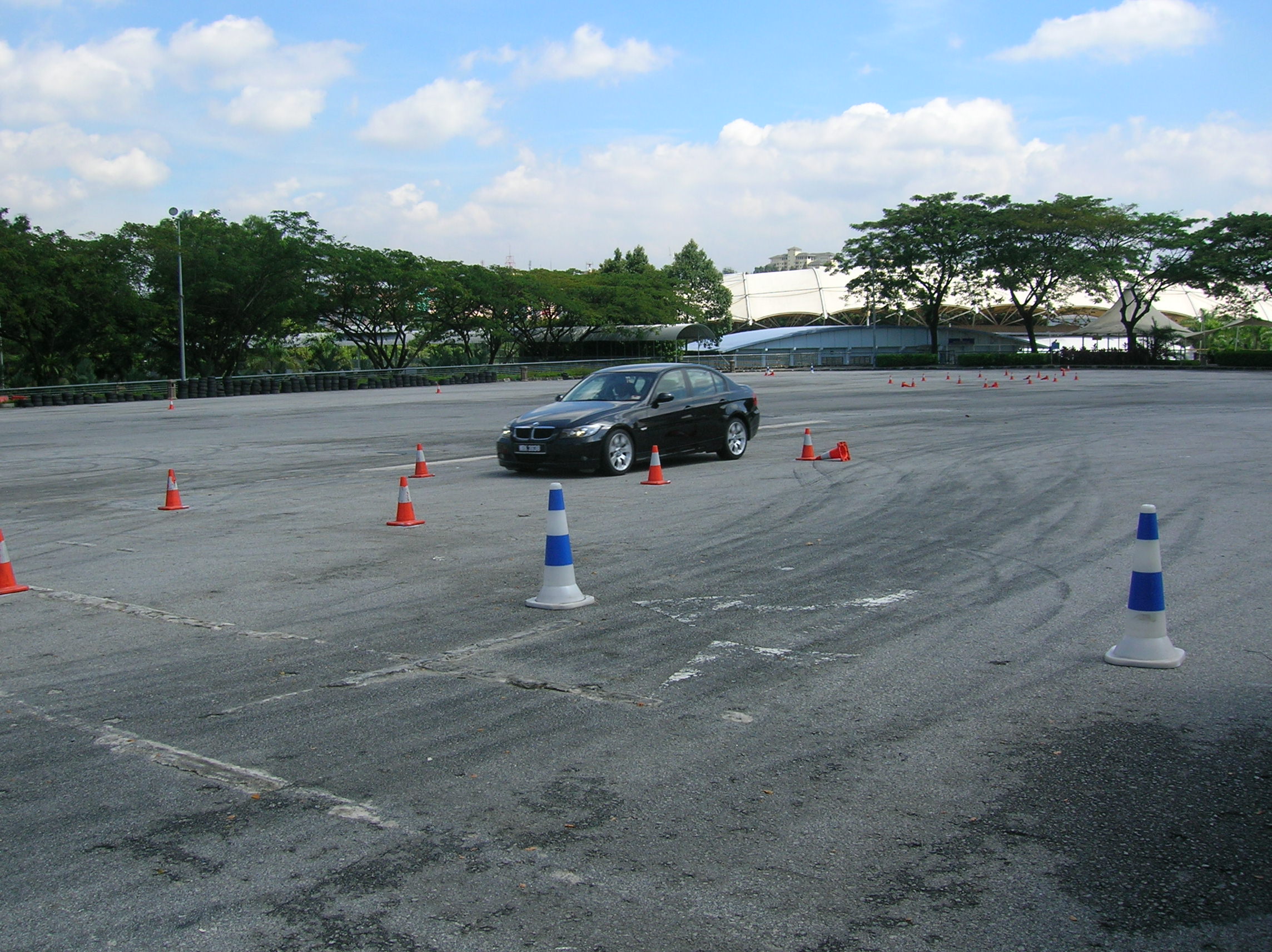 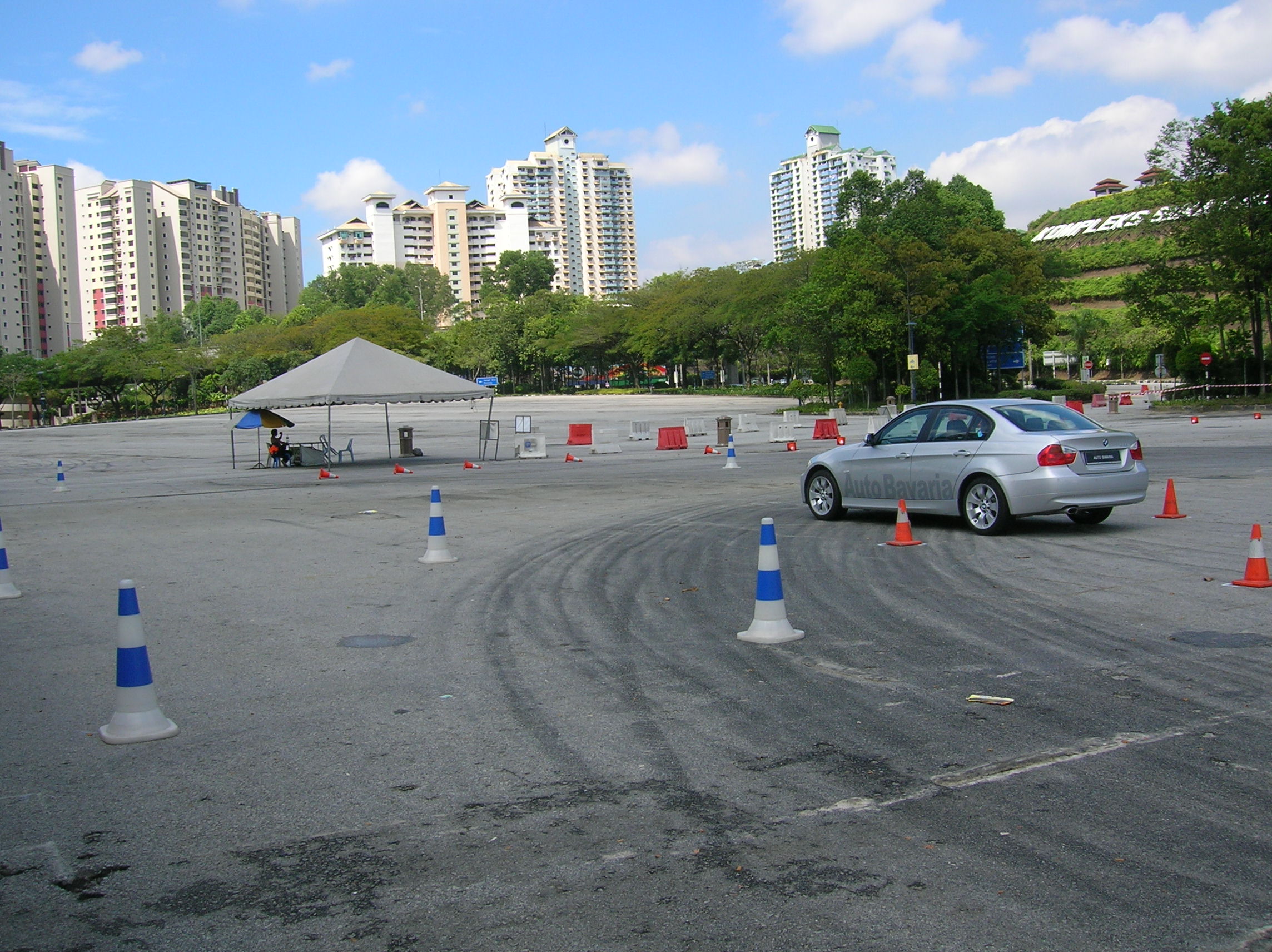 Parking attendant having absolute confidence in the Bimmer’s brakes.

The second exercise was very similar to the first one. You also accelerate about 60-70 metres towards a cluster of pre-arranged cones and then slam your brakes. However, the difference is, this time, as you’re stepping on the brakes, you also need to steer your car to the side.

The idea of this test, as the instructor puts it is that, it simulates what happens when say, you’re following a truck at some speed and that a fridge (his words) suddenly drops out into your path. With the ABS and all the other three-lettered electronics working their magic, rather than skidding your BMW will still remain in control, allowing you to calmly steer your way out of trouble.

I have actually faced two senarios that would have been adequately simulated by this exercise in the real world, though I was driving something not as well equipped – a Wira 1.6, which still had four disc brakes though, but sans ABS. The first time, I slammed on the brakes, the car couldn’t steer and slammed into the rear of a Wira Aeroback. Fortunately, the second time, I had adequately trained myself to be able to modulate the brakes just before its locking point, and managed to steer my car to safety.

Situations where a sudden lane change is required is when the ABS is most useful. Those without this feature must learn to be able to properly modulate brake pressure to avoid locking the wheels. It’s difficult, but it can be done. 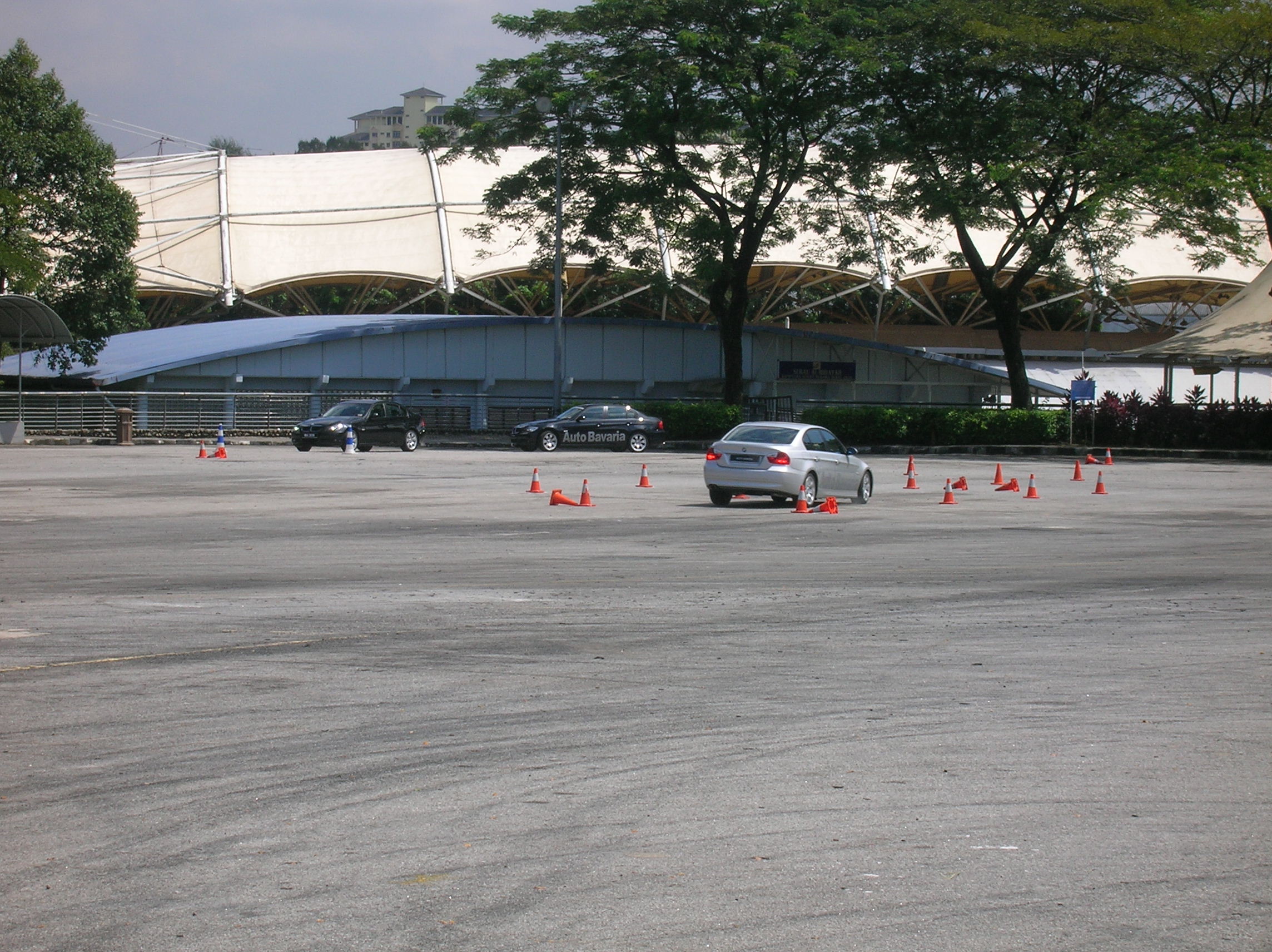 Wrapping things up was a simple slalom course, which the instructor told us to take at constant throttle, limiting ourselves to about 35 kph. The objective of this was to feel the famed 50:50 front/rear weight distribution that BMW prides itself with.

On my first run, I set the Steptronic to hold the transmission at 1st gear, which was on hindsight an amateur mistake. While the car tracked easy enough, the engine sounded a little strained, with the instructor suggesting on the walkie to use ‘D’ instead.

I used ‘DS’ on the second run, and it was much better. The car handled just as well, with the engine having to work less hard than before. I then recalled that on my previous Performance Drive, we had a longer run up from the start to the slalom. Using the Steptronic at manual mode then made sense, as I would have had to upshift to 2nd when I reached the first cone. I remembered at that time, using the Steptronic at manual gave me better runs than my friend with me then. 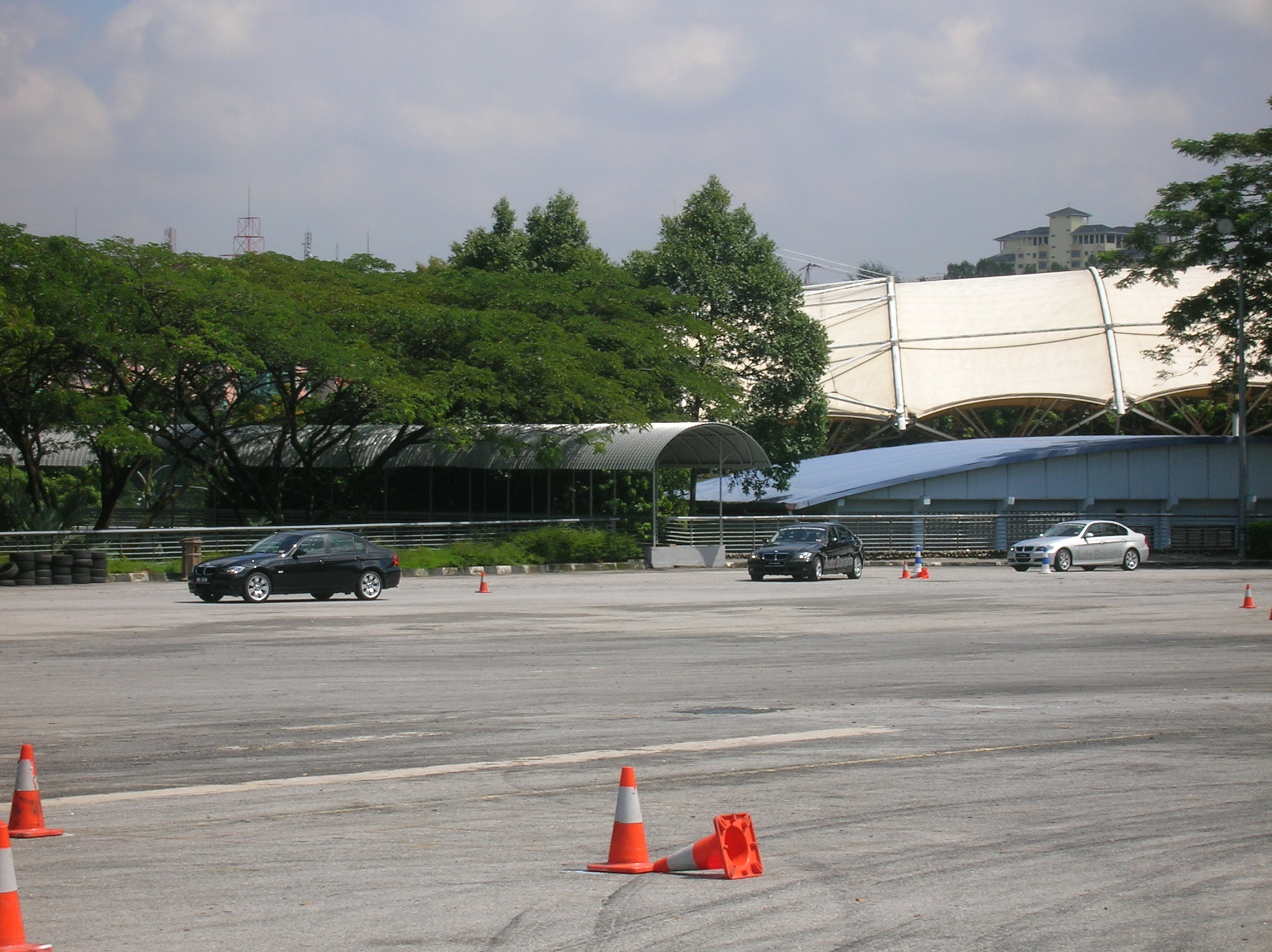 Missing from this edition was the skid pad exercise, which (you guessed it) I tried first time round. In that edition, at Segambut, the skid pad took the place of the emergency lane change exercise, and was frankly, a lot more fun. We were supposed to let our BMW spin out of control over an oil slick, once with DSC on, once more with it off, and compare the difference for ourselves.

I am certain that everyone who participate in this exercise had a great deal of fun. Driving a BMW might be an everyday affair for some people, but it’s not everyday you can drive a BMW like this. It was marketing excellence bar none by both Auto Bavaria and BMW Malaysia. I heard a few waiting participants (read: customers) at the tent remarking how all these exercises served to build their confidence in their BMWs. They are absolutely right, but that’s not even the full story.

The whole idea was to create a memorable experience for participants to associate the BMW brand with. The memory of this event would evoke all the excitement they felt when slamming the 320i’s brakes, and this excitement is then linked with the image of the BMW propellor badge. Oh, what joy…