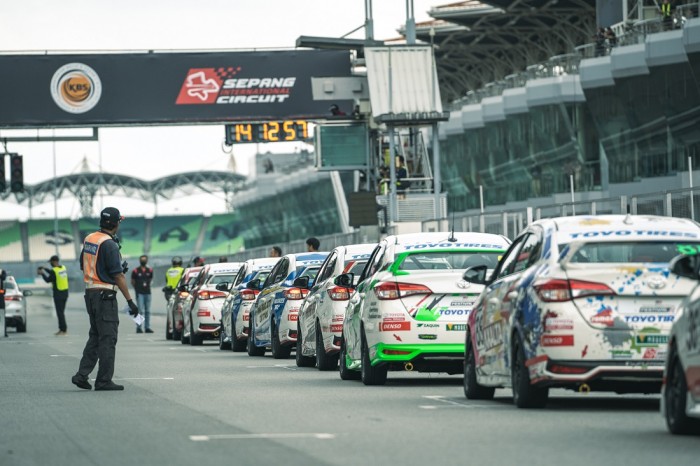 The Young Driver Development Program which was started by UMW Toyota Motor and GAZOO Racing in 2020 is bearing fruit as several of its rookie drivers are quickly rising to the top ranks of Malaysian motorsports and being noticed. 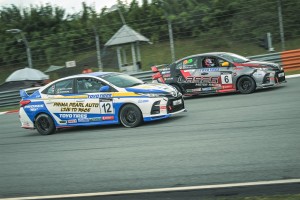 In Round 2 of the GAZOO Racing Vios Sprint Cup last weekend, 16-year-old Putera Adam raced to a double race win, together with his partner and veteran racer Eddie Lew in the #61 Laser Motor Racing Vios. The weekend also saw sterling performances by Naquib Azlan and Mika Hakimi. All 3 young drivers are from the first batch of the Young Driver Development Program to groom drivers between the ages of 16 and 20 to transition from karting and simulator racing to saloon car racing. Incidentally, Putera Adam is the youngest of the first batch of rookies, joining the program at aged 14. Both Putera and Naquib also went on to score podium finishes in the Malaysia Championship Series (MCS) that was also held over the weekend. 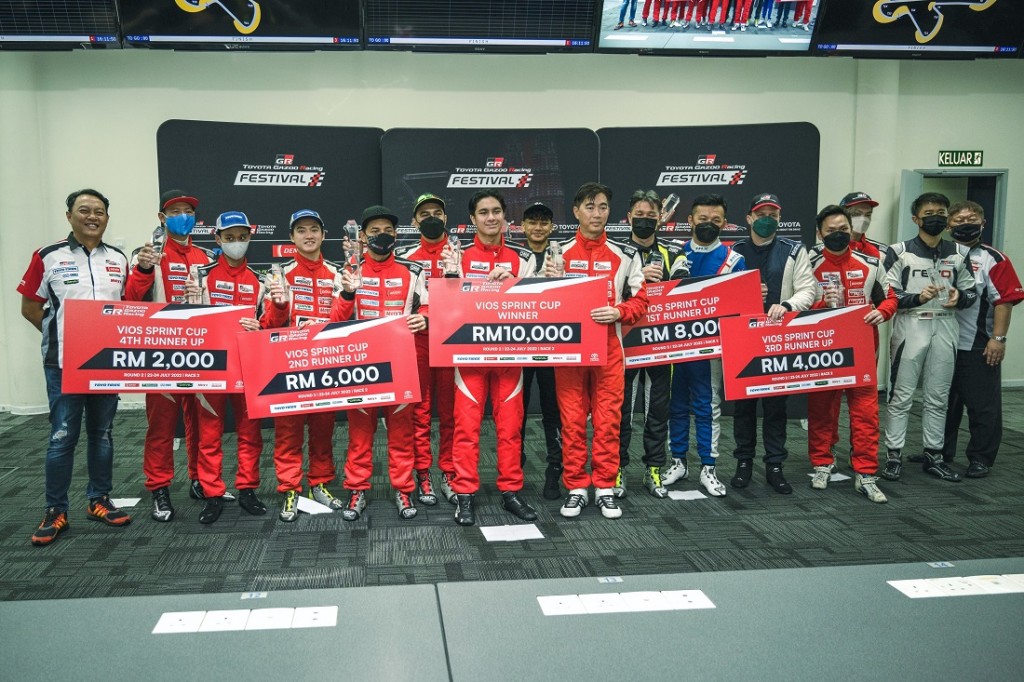 “It’s incredible to see how much and how quickly these young drivers have evolved. We are equally proud that many have also gone on to compete and are enjoying success in other events beyond the Vios Challenge and Vios Sprint Cup one-make series where they have trained so hard to develop their driving and race craft,” said UMW Toyota Motor President Ravindran K. 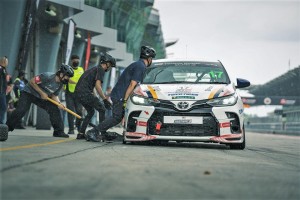 Commenting on the GAZOO Racing Vios Sprint Cup, Ravindran said: “The two-driver and one-hour format has brought a different dimension to what we and the drivers have been used to in 5 seasons of the Vios Challenge. It’s incredibly exciting to watch, it’s unpredictable, and it fulfills one very important objective that is to have elite/experienced working alongside amateur / young drivers with the hope that they will be able to impart their knowledge to the next generation of drivers.”

The GAZOO Racing Vios Sprint Cup was held along with the Malaysia Championship Series, and consisted of 2 rounds and 4 individual races. It is a one-make race involving two-driver teams competing in a one-hour race and vying for total prize monies amounting to RM60,000 per weekend. 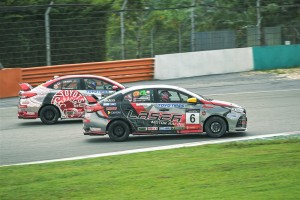 The GAZOO Racing Vios Sprint Cup is run independently of the Vios Challenge but it retains the format of a one-make series whereby competitors drive identical race-prepared Toyota Vios with stock standard engine & transmission, as well as suspension, tyres and fuel – to ensure that the emphasis is on race craft, driving skills and experience.

In this 4th and final running of the GAZOO Racing Sprint Cup, Putera and Liew rounded up a perfect weekend in rather precarious conditions with back to back victories. Round 2’s Race 2 began as a dry race despite overcast weather at the Sepang International Circuit. But as the one-hour race around the 5.543 km track got underway, it started to drizzle which made track conditions tricky and unpredictable in certain sections. 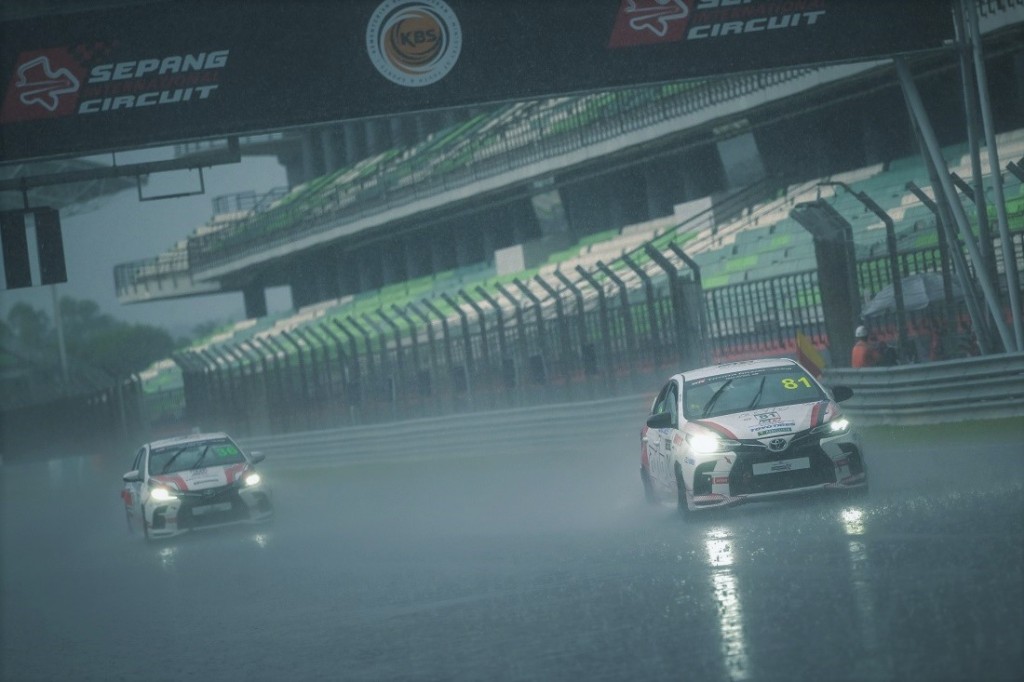 Heavy rain then descended on the race with just 2 laps to go and the pressure to defend his lead seemed to have gotten the better of Mika who aquaplaned off the track, easily letting Lew, Ho and Prima Pearl TD Racing’s second car i.e. #12 with Mitchell Cheah in the driver’s seat through. Mika fought his way back on to the track, rejoining in fourth position but made a 2nd mistake on the final lap in the very same corner to  eventually finish 5th behind Telagamas Toyota’s Freddie Ang.

The last lap of the race was equally nerve-wracking for Lew as he had to fend off Ho who was left dragging his rear bumper for several laps after a botched overtaking maneuver much earlier. “Today I really utilised all my experience to drive in the dry, wet and in heavy rain. It was a difficult race,” said 48-year-old Lew. 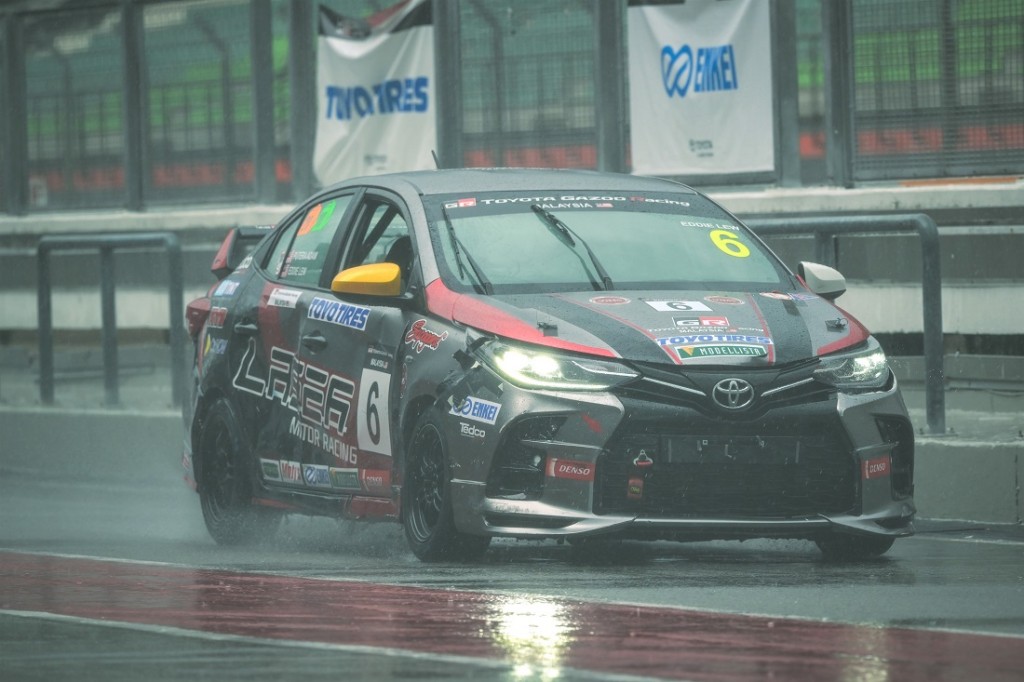 For Putera who started the race for the pair, a slow getaway dropped him to as far back as 10th despite starting from 6th position. “I struggled a bit at the start. After regrouping over 3 to 4 laps I chased for the lead and eventually led the race but in no time, I had Tengku Djan on my back and he was definitely a lot faster. After he passed me, I just decided to follow him because I knew it was a long race ahead,” commented Putera.

On his partnership with Lew and the vast difference in age, Putera also said: “It’s an honour to drive with Eddie (Lew). He’s a very good driver and he used to drive with my dad.”

The biggest gainer in today’s Race 2 however, was Super Evergreen Motorsports’ Mohamad Roni who jumped from 14th on the grid to 2nd place in the opening laps of the race. He was however, punted off the track in a race incident. Disappointments over the weekend included that endured by the pair of Naquib and Hayden Haikal representing Axle Sports who gave away a victory in Race 1 with a last lap incident, and was again involved in an incident in Race 2 eliminating them from contention.

The champion in each of the 2 races at the GAZOO Racing Vios Sprint Cup stood to win RM10,000 cash, followed by RM8,000 for the first runner up, RM6,000 to the 3rd place, and RM4,000 and RM2,000 for the 4th and 5th places respectively. In total, the Vios Sprint Cup offered prize monies that amounted to RM60,000 per round, making it the second most lucrative racing event in Malaysia after the Vios Challenge.

In the 4 races held and from a total of RM120,000 at stake, the pair of Tengku Djan and Mika emerged with the most winnings, totaling RM30,000 accumulated from 2 race victories, a 2nd and a 5th place finish. The pair of Putera and Liew meanwhile, collected a total of RM24,000 over 4 races with 2 victories and a 4th placing.