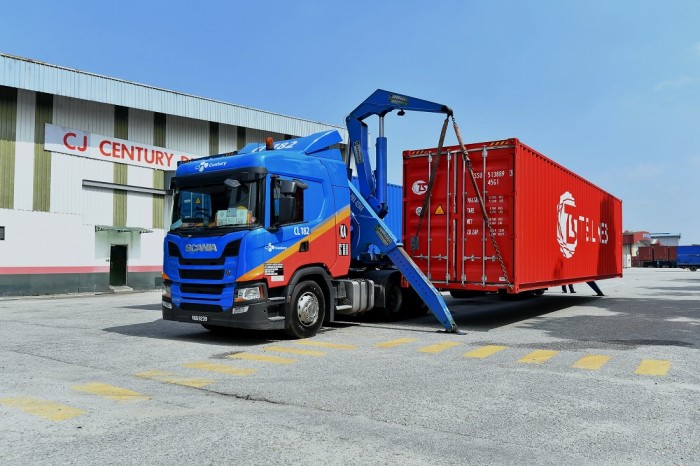 CJ Century Logistics Holdings Berhad has taken delivery of the first 13 units of Scania New Truck Generation (NTG). These 13 trucks are also subscribed to the Fleet Management System (FMS) Control 10 which paved the way towards a major Scania Science Based Target activity i.e. the Scania Ecolution Partnership Agreement. This sustainability objective is in line with the Science Based Target initiative (SBTi) set at the Paris Agreement in 2015. 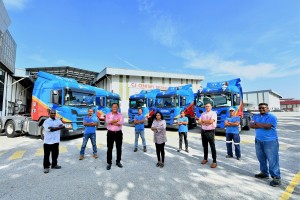 Joining as a Scania Ecolution partner signifies CJ Century’s commitment in reducing its carbon footprint, starting with these 13 new NTGs. Scania Ecolution is a tailor-made partnership between Scania and CJ Century and focuses on reducing fuel consumption which would result in reduced Carbon Dioxide (CO2) emissions. The partnership also works on reducing operating cost, translating to improved profitability while fulfilling the growing demand for environmental-friendly initiatives.

Furthermore, all 13 NTGs are customised with the flexible financial solutions from Scania Financial Services which gives predictable cost over the vehicles’ lifecycle. The new trucks add to the company’s existing fleet of 84 Scania Prime Movers.

“We are pleased that CJ Century is joining Scania in our Ecolution initiative to reduce the CO2 emission and its impact to the climate change. As a public-listed company, CJ Century is setting a good example by being a responsible corporate citizen in playing its part in caring for the environment, while increasing its profitability as well. As part of our legacy, we will continue to drive the shift towards a sustainable transport system with CJ Century,” said Heba El Tarifi, Managing Director, Scania Southeast Asia. “Scania will guide CJ Century into a more sustainable future for its shareholders.” 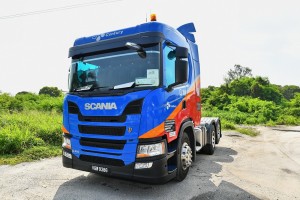 The delivered Scania G410A6x2NZ NTG models feature Scania’s new Opticruise gearbox, available for the high-output 13L engines, and features improved and smooth gear shifting in combination with better fuel economy and excellent comfort. To be even more fuel efficient, these NTGs can be pre-set with economy mode on default in any of Scania’s workshops nationwide. Other standard key benefits are Electronic Braking System, ergonomic cabin with easy-to-use controls, driver seat close to the door and large windscreen with extended view making it easier for the drivers to operate in a comfortable and safe environment. 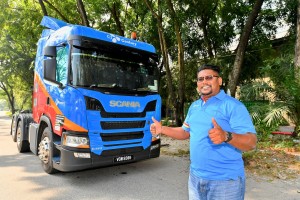 These NTGs will join the existing fleet and are dedicated to the haulage division. The addition will further extend CJ Century’s reach to capture a bigger market share in the logistics industry for its shareholders. CJ Century is a leading logistics solutions provider with core competency in designing, implementing, and managing end-to-end supply chain needs for multinational companies to homegrown businesses, supported by its strategic alliances with global and domestic network partners. Constantly adapting to the changing times in building new levels of resilience and efficiency, CJ Century strives to enhance its competitiveness through investments in technological advancement and latest infrastructure for supply chain optimisation.

As part of CJ Logistics, CJ Century has access to an extensive network throughout the world. The company has net lettable space in excess of 4.5 million square feet and employs more than 1,000 people nationwide. 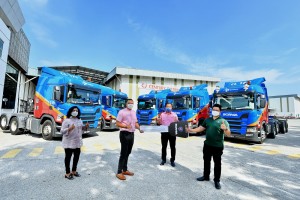 “We have been using Scania trucks for more than 20 years. The support we receive from Scania Malaysia has been excellent, and they continue to meet our expectations with their solid brand’s reliability and after-sales service. This new purchase is part of our ongoing investment in optimising our fleet management to support our business growth and further proof of our commitment in achieving sustainable logistics,” said Steven Teow, Chief Executive Officer, CJ Century Logistics Holdings Berhad.