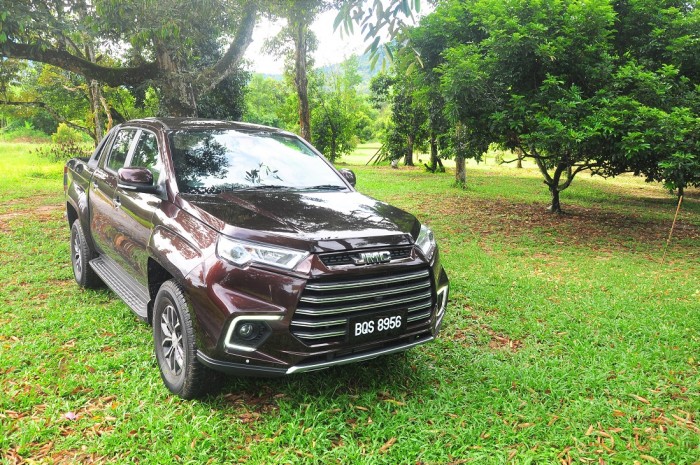 I don’t usually do this – review a model more than once, but curiosity got the better of me. Not long after the JMC Vigus Pro was launched in Malaysia, I had taken one out for a joyride. And it was quite an enjoyable one. However, due to circumstances at the time, I did not have this new and completely unknown pickup truck for very long. So, while the initial impressions were favourable overall, I had wanted to get a better feel of it. Which explains this second review, which is not sponsored if you are wondering. 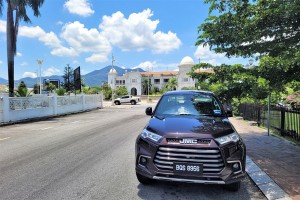 And so, to get a better feel of the Vigus Pro and to see what it is, and is not, I managed borrow one for a longer period. Before I go on to my opinion of the JMC Vigus Pro after a 1,000-plus km drive, here is a brief recap of this pickup. JMC is a brand of Jiangling Motors Co, Ltd of China. Interestingly, and of little value to this review, JMC is also in joint ventures with Changan Automobile, and calls Ford a shareholder (which also has a working relationship with Changan). A few months ago, JMC sold its heavy duty vehicle unit to Volvo Trucks; China is after all a sought-after market for big trucks, being the world’s largest market with 1.6 million trucks sold last year. 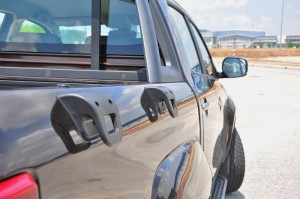 As for the Vigus Pro, it is built on a ladder frame chassis, typical for a pickup, with a wheelbase of 3,085 mm. The overall dimensions are 5,305 mm (length), 1,905 mm (width), and 1,835 mm (height). Ground clearance is 225 mm, and turning radius is 6.5 m, which are good and fair for a pickup and not far off from the major players in the market. Where it differs from the regular fellas in the pickup market is its 850 kg payload; most of the others can pick up a ton. However, it does have anchor points on the outside of the flat bed for securing cargo, something not common with rivals. 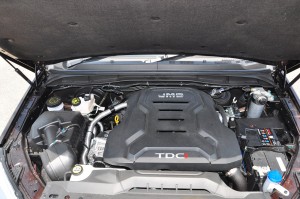 The JMC Vigus Pro is also powered by a 2.0L diesel engine, which is the other difference, providing a little savings on road tax. The Puma (also the codename for Ford’s Duratorq TDCi) engine in the Vigus Pro is a 4-cylinder VGT (variable geometry turbo) Turbo Intercooler Diesel tuned to produce 141 PS @ 3,600 rpm and 340 Nm @ 1,500 – 2,600 rpm, and paired with an 8-speed ZF automatic transmission via a drive-by-wire system. Though it is down on power compared to Ford’s latest single turbo 2.0L engine in the Ranger XLT+ (180 PS, 420 Nm; 10-speed auto), you’d also be down about RM30k with that choice.

So really, the Vigus Pro falls into a pocket within the pickup segment where the pocket takes precedence. The Vigus Pro retails at RM98,888. You can of course, opt for the much cheaper ‘contractor spec’ low riders (no offense to contractors) from other brands which are really bare-bones units. With those, you will also possibly not get an all-wheel-drive system, 4 ventilated disc brakes, auto headlights, rain-sensing wipers, cruise control, auto up/down powered windows, 8″ touchscreen infotainment and paddle shifters that the Vigus Pro comes with.

Furthermore, the key components of the drive are from 3rd parties e.g. BorgWarner 4WD system, Bosch high pressure common rail, and Eaton rear differential lock. This means the particular parts, like the ZF gearbox, are non-proprietary and should be easily found, repaired or replaced, which is an advantage for lower volume vehicles.

But this is not to say that the JMC Vigus Pro is a bonanza of a pickup. In my previous test drive, I had found the ride quality pretty satisfactory overall though it was mainly in very urban driving, with a bit of dirt surface action. But you tend to get to know a vehicle pretty well after spending well over 1,000 km with it.

On the highway, the shift paddle does come in handy for quick hands-on-steering downshifts to overtake. But as it weighs nearly 2,000 kg (kerb weight), it’s no hot hatch. Add in passengers and/or cargo and you will need to time your overtaking but this really is all about getting to know how the vehicle behaves. That said, even with all the seats occupied, the Vigus Pro can get well over the highway speed limit and still feel stable. However, there are compromises in doing so. Firstly, it stops being frugal on fuel (as expected), and secondly, the road imperfections get amplified in the cabin. I can’t confirm, but a combination of firm suspension, no weight in the flat bed and the Giti tyres might have contributed to this. But on the bright side, the extra vibrations and noise could get you to slow down so it becomes frugal again. On that, my overall average fuel consumption was 8.0 l/100km, which isn’t far from the claimed 7.8 l/100km in the brochure. 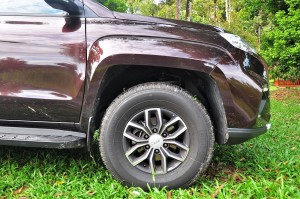 One also needs to bear in mind the stopping power needed for 2 tons. Even with disc brakes all round, it still needs effort to slow down or come to a complete stop. This is not a big issue when driving at city speeds, but it is a different story on the highway. My personal gripe with the brakes is that the final bite is too ambiguous for my driving style and that I have to put more pressure on the pedal. 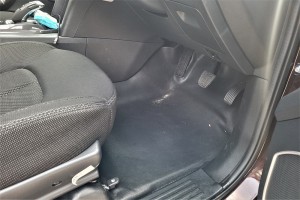 But when you’re driving it within legal limits, there is not a whole lot to complain about as the engine hovers under 2,000 rpm. Pair that with cruise control and it becomes an easy ride. So while I might complain about taking the Vigus Pro on long distance drives, I could see it serving well in the usual commutes. Surprisingly, on the long drives of a couple of hundred kilometers at a time, there was no body ache nor fatigue. Additionally, the vinyl layer on the floor made it easier to dust off the collected dirt.

The first thing some might notice of the interior is the use of fabric upholstery, manual air-con controls, analogue meter cluster, an ignition key slot and an actual handbrake lever. While I would appreciate the extra space an electronic parking brake button would give, I really don’t mind a mechanical lever as it is more practical (no, I didn’t try J turns and there is no proof of that; trucks have a higher centre of gravity FYI). I also didn’t miss out on climate control nor a digital display because what’s in the truck worked. It’s the same with the halogen bulbs in the headlights; they don’t look as nice but are cheaper and easier to replace. But I would have liked an infotainment unit with wireless Android Auto or Apple CarPlay connectivity. And given what the competing models are offering in this price range, the missing gizmos may turn off some potential buyers. But this is something the distributor, Angka-Tan Motor, will have to speak to the principal about.

So yes, there are compromises with the JMC Vigus Pro, but one can hardly call any vehicle perfect. That really depends on how much you are willing to pay. In my opinion, the Vigus Pro suits someone who needs the functionality of a pickup truck, as well as the robustness and reliability, but has a limitation on budget. It is for someone who needs to prioritise the workhorse function but wants something more than the bare-bones choices available. Those who want a pickup are more likely to be willing to spend more for models with fancier toys. 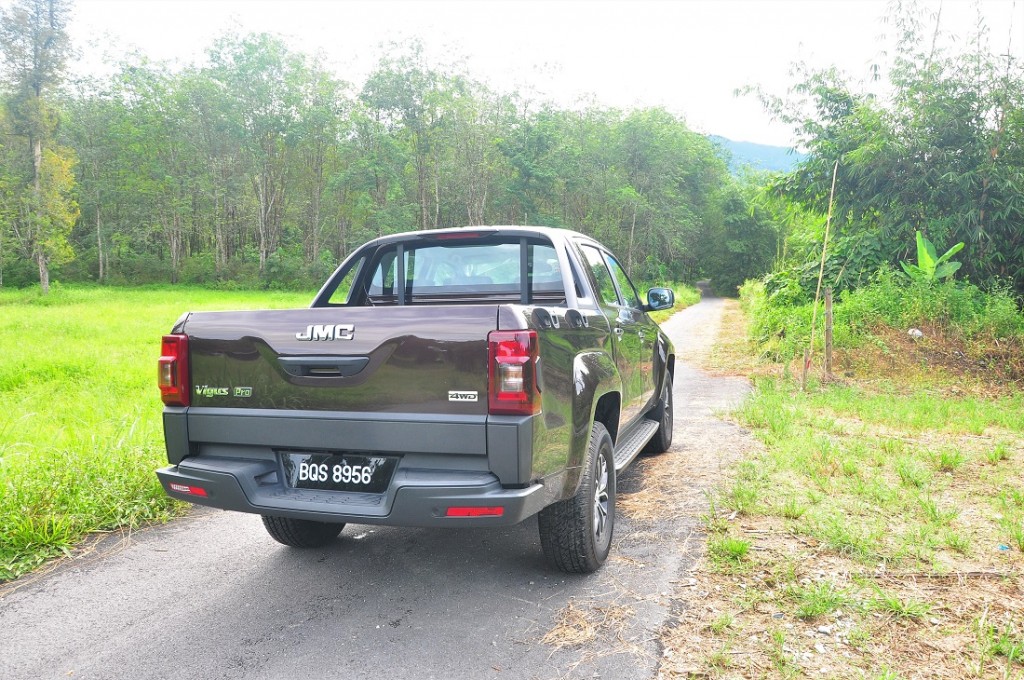