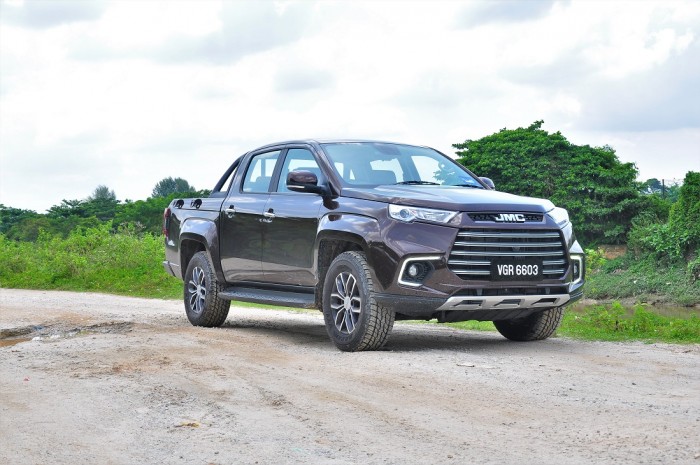 To say the JMC Vigus Pro has several challenges ahead of it is putting it mildly. Most obvious is its brand; it is generally an unfamiliar one to Malaysians. And with that, other challenges follow, because even if it does offer what someone looking for an affordable workhorse wants, the hurdle is brand recognition. This would be task that official distributor, Angka-Tan Motor Sdn Bhd (ATM) has to tackle.

To briefly recap, ATM and China-based Jiangling Motors Co, Ltd (JMC) had entered into a Vehicle Technology Licensing Agreement that gives ATM the right to manufacture, assemble and sell the Vigus Pro and its related parts and components in Malaysia. ATM is part of the Tan Chong group, while JMC counts Ford as a substantial shareholder.

So this is a Chinese-designed Ford, you say. Well, it’s more of a yes and no. There is no hiding of Ford DNA or inspiration. After all, in the global scale of things, it makes economic sense for companies to share resources, especially since one party is also a shareholder of the other.

ATM had also revealed that the engine powering the Vigus Pro is a Ford-derived 2.0L Puma diesel engine with variable geometry turbocharger. Though this isn’t the most current generation engine from Ford, it is a proven and dependable unit. Engine power however, goes through more gears than others in its segment i.e. 8 speeds. Through the 8 gears of the ZF automatic gearbox, the engine gives you 141 PS and 340 Nm of torque (from as low as 1,500 rpm) which is enough for most tasks, and not far off from competing models.

The extra gears give the advantage of a smoother drive and better fuel economy. That said, don’t expect the Vigus Pro to be a rocket with a flat bed, because it feels like smoothness and economy are key factors for this truck. The 8-speeder gearbox does come with a manual mode which can be manipulated by either a first-in-class electronic gear selector or steering-mounted paddles. This does help a little to make the truck move more briskly in the first couple of gears.

Aside from the transmission, other sourced parts include a BorgWarner 4WD system, Bosch high pressure common rail, and Eaton rear differential lock. These 3rd party components should give some comfort to buyers as they are not proprietary to the brand and as such are easier to source.

The combination of these components, including the use of a balance crankshaft design, exhaust gas recirculation cooler bypass valve, independent double wishbone suspension at the front (and multi-leaf spring in the rear), as well as a sturdy ladder frame chassis, give the Vigus Pro a rather refined ride quality which could surprise some.

But ultimately, you are still in a pick-up truck and so it is only natural that you will hear and feel a pick-up truck. But what you do hear and feel as a passenger is considered rather good. Whether on tarmac or gravel, the Vigus Pro feels stable and firm. I didn’t get to test out its maximum load capacity of 850 kg (a little less than some other pick-up), but it should not be an issue. The Vigus Pro comes standard with 265/70 R16 tyres which should provide better buffering from the road imperfections, and be more affordable to replace than the larger Maxxis Bravo A/T 265/65 R17 tyres fitted on the test unit.

And though the overall ride quality is satisfactory, I wished the interior ambience was the same. While the exterior of the Vigus Pro bears similarity to the JMC Yuhu-9, the interior is more from a preceding Yuhu-7 model. It is however fitted with a 2-spoke leather-wrapped and flat-bottomed steering, much like the Yuhu-9 and the latest Yuhu-7 in China. However, unlike the China version which is offered with soft leather upholstery in dual tone finish, etc, the Vigus Pro is more utilitarian with fabrics and hard plastics. Even the air-conditioning is a manual one, and the floor is laid with vinyl rather than carpet which makes it easier to clean. The 8″ infotainment though with touchscreen, MP5, Bluetooth and USB features is quite basic too. However, I don’t see this as an issue with something that is pragmatic or utilitarian, as cost is an important factor in this sense. Furthermore, having more buttons and “lifestyle” features can be distracting and can complicate things. Sometimes all you want to do is load it up and drive off; you probably won’t be touching the touchscreen nor meddling with infotainment menus.

There is however, cruise control which is a useful feature for longer drives, as well as rain-sensing wipers and automatic headlamps (halogen though, but with level adjustment). Voice calls via Bluetooth are also convenient to have. Standard safety features include Anti-lock Braking System, Electronic Brake-force Distribution, Electronic Stability Programme, Traction Control System, Hill Start Assist, Hill Descent Control, and 2 front SRS airbags. For cabin practicality, the rear seats can be folded either up or down depending on your carrying requirements. But more storage options, especially for the driver, would be a bonus.

As mentioned, the fascia of the Vigus Pro is taken from the Yuhu-9 with the distinctive C-shaped LED daytime running lights and a dominant front grille. To look like a rugged pick-up, the Vigus Pro is also fitted with a solid lower guard plate in front as well as side steps. At the rear, a step is integrated into the bumper for an easy climb to reach cargo. There are also proximity sensors front and rear as well as a rear view camera.

All-in, the JMC Vigus Pro is meant to be a capable workhorse that is mechanically sound and friendly to the bank account. Priced just under RM99,000, it is more affordable than, though not very far off from, rival pick-ups. And though certain creature comforts such as push button start has been omitted, possibly to reduce cost complications of replacement fobs, its success would very much depend on how effectively ATM markets the Vigus Pro. The Tan Chong group is no stranger to workhorses (it is the distributor for UD Trucks) and has an established network and thus that portion of aftersales support should not be an issue.