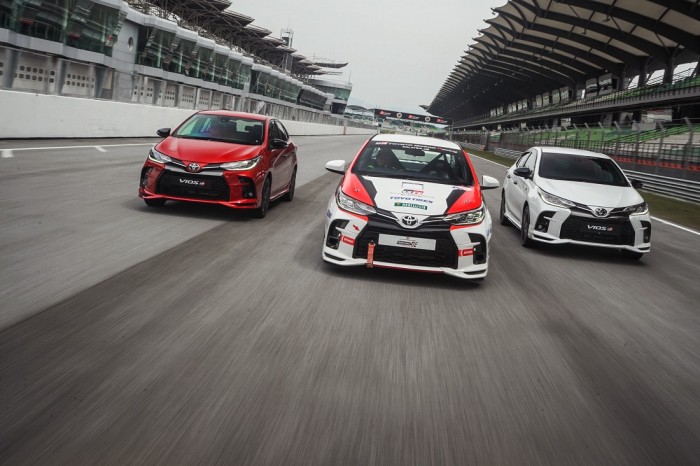 You can now add some sporty touches to your Toyota Vios or Yaris with the GAZOO Racing (GR) parts and accessories. Sold by UMW Toyota Motor Sdn Bhd exclusively through the 5 GR Garages and 39 GR outlets (Toyota dealerships competing in the Vios Challenge race series), these are quality parts specially tailored to the 2 mentioned models.

The GR parts available include:

These items are specifically for the Toyota Vios GR-S, Vios and Yaris, and GR Yaris.

All other parts listed are available for the Vios GR-S, Vios and Yaris. However, the Vios GR-S already comes standard with the GR push start button, GR emblem, GR carpet mat, so you can give those a pass.

“GAZOO Racing is a name that has gained tremendous traction in the domestic market since we first introduced the brand here in 2017. The brand represents Toyota’s motor-acing activities worldwide, and this has translated into a great number of initiatives locally that include the organizing of the Toyota GAZOO Racing Festival, the Vios Challenge one-make race, the GAZOO Racing Velocity Esports Championship, the launch of exclusive GR vehicles, the roll-out of the Vios GR-S in Malaysia and establishing the GAZOO Racing Young Talent Development Program for young racing drivers. The availability and sale of GR parts and accessories is a further extension of these initiatives as Toyota steps up its efforts to gain a bigger foothold in Malaysian motorsports,” said Akio Takeyama, GAZOO Racing Malaysia’s Chief Motorsports Officer.

“GR is as much about performance as it is about styling, safety and lifestyle, and this is reflected throughout the introductory list of parts we are making available today.”

UMW Toyota Motor President Ravindran K. also mentioned that the availability of GR Parts allows Toyota owners to add a higher degree of personalisation to their vehicles, especially those who share the passion for motorsports.

“While GR models are a pedigree of its own, the GR brand is not confined to only outright performance. The brand also conveys driving enjoyment and excitement, and this is precisely what customers can look forward to with the availability of these parts and accessories,” said Ravindran.

All GR parts and accessories come with a 1 year warranty. To ensure quality fitment, customers can have the products installed at the respective GR Garages or GR outlets.

For the complete list of GR outlets, or for more information, visit www.toyota.com.my