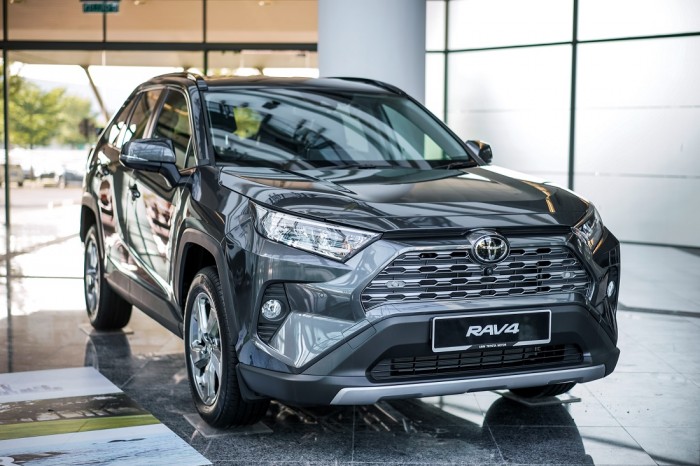 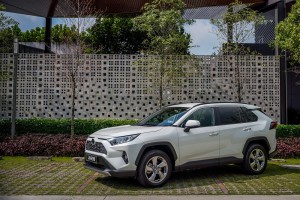 UMW Toyota Motor has officially launched the new Toyota RAV4 SUV in Malaysia. First introduced in 1994, the compact RAV4 changed the game in the SUV segment. Unlike the existing SUV players at the time which were larger vehicles with body-on-frame construction (like trucks), the OG RAV4 was compact and used a unibody construction (like cars). And very soon, the compact SUV segment grew a life of its own. To-date, Toyota has sold over 10 million RAV4s globally.

The fifth generation RAV4 is no longer compact, changing with the market needs of more interior space, and comfort and safety features. UMWT is offering two RAV4 variants in Malaysia i.e. 2.0L and 2.5L, both naturally aspirated and fully imported from Japan. 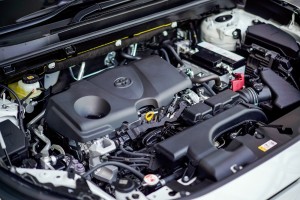 Both these engines are from Toyota’s new Dynamic Force Engine series. These are lighter, more powerful high compression (13:1) 4-cylinder petrol engines with advanced D4-S fuel injection that combine direct and secondary port injectors. Combined with an electronic VVT-iE intelligent variable valve-timing and ultra-low internal friction, the engines have greater thermal efficiency. The thermal efficiency is as high as 40%, double that of the average engine.

The 2.0L (M20A-FKS) produces 173 PS and 207 Nm of torque with the help of a CVT (continuously variable transmission) with Sequential Shiftmatic, while the 2.5L (A25A-FKS) has 207 PS and 243 Nm of torque and is paired to 8-speed Direct Shift automatic transmission. 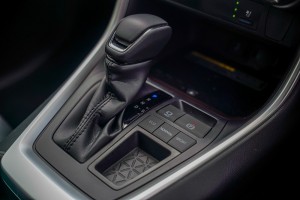 The 8-speed gearbox is an improved one that is more compact than Toyota’s 6-speed transmission in the previous RAV4. It features and all-range lock-up for smoother and better acceleration, with less power loss. This results in better driving performance as well as fuel economy.

For both transmissions, there is a choice of three driving modes i.e. Eco, Normal and Sport to suit driving preference or conditions. Selection of the preferred mode is done by pressing switches on the centre console. Paddle shifters are also available for manual gear selection.

The RAV4 sits on the new TNGA-K platform which it shares with the Camry and Lexus ES. The TNGA (Toyota New Global Architecture) platform is designed to improve on Agility, Stability and Visibility. Its monocoque structure has 57% more rigidity. It makes use of a ring structure to increase the torsional rigidity of the body and enhance the vehicle’s agility. It also receives reinforcement in many areas for a stronger structure.

The TNGA platform also allows for the powertrain to be placed lower down for a lower centre of gravity and better stability. The use of high-strength hot-stamped steel and aluminium have also reduced weight in the upper body, helping to shift the centre of gravity downwards. A new saddle-style fuel tank distributes weight of the fuel evenly side-to-side. 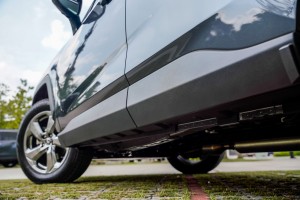 The suspension consists of MacPherson struts (with stabilizer) at the front and trailing wishbones (with stabilizer) at the rear. The coil spring and shock absorber characteristics have been optimized to provide superior ride comfort and linear steering response when cornering at mid to high speeds. The trailing wishbone suspension has been developed to provide top-class shock reduction over uneven surfaces which results in better riding comfort. A select group of takumi (highly trained master craftsmen) also helped to refine the ride comfort, focusing on tuning details to ensure a level of vehicle smoothness in most driving conditions, particularly at everyday speeds. 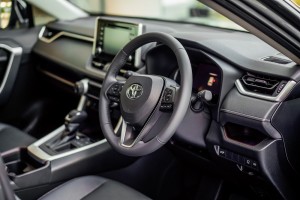 Further, a new steering system is installed in the RAV4. The new parallel-type electric power steering system is rack-mounted rather than column-mounted, unlike the previous model. The new design helps enhance turning response and gives a natural feel that can help reduce fatigue on long drives. Higher rigidity in the steering mounting and column further enhances steering responsiveness and feel.

Besides improving body rigidity, the reinforcements help to reduce a variety of vibrations, raising the sense of quality. Low noise features include integrating the floor silencer and expanding its surface area. The increased coverage achieves a quieter interior space. Damping materials with optimized thicknesses have been adopted over a wide area, resulting in road noise being lower. 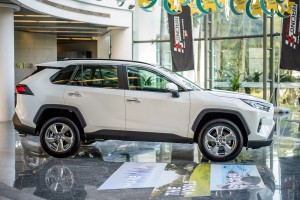 The fifth generation RAV4 adopts an exterior design developed from the FT-AC concept. There is quite a liberal dose of octagons and trapezoids applied to the vehicle, in character lines and sectional elements, to give the vehicle a more chiseled look and wider stance.

A notable change is the location of the door mirrors which have been repositioned from the window panel to the door panel. This gives increased forward visibility around the A-pillars. Side visibility is also increased with a lowered beltline and the redesigned and enlarged rear-quarter glass.

The RAV4 rides on 18″ alloy wheels with a rugged 5-spoke design. The tyre size fitted is 225/60 R18 which offers a good balance between comfort and handling. The spare tyre is a 165/80 R17space-saver type for emergency use.

The interior design is focused on practicality with a high-quality SUV atmosphere. The front seats have thicker cushions and enlarged lumbar support pads for better bolstering. The seating posture has been redesigned to fit a wide range of users. The driver gets 8-way power adjustment and memory features, while both front seats get a Seat Ventilation System for enhanced comfort. 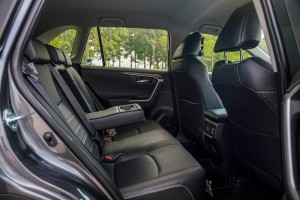 Meanwhile, the rear passengers get to enjoy the same improved seat design and structure, as well as a reclining feature. Legroom at the rear is ample and still comfortable for very tall adults. The rear seats are split 60:40 split and can be folded down without removing the headrests. The side surfaces at the rear have been shaped for maximum space usage enabling you to fit a 62″ bicycle in the cabin without needing to remove the front wheel. 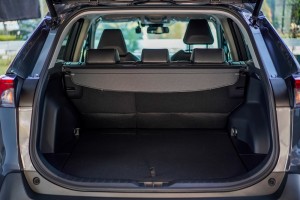 The cargo volume is a very ample 580 litres. The boot floor is a two-level deck that provides more flexible storage. By repositioning the reversible waterproof deck board, the volume can be further boosted. Removing the pocket separators increases storage width by 100 mm and brings the maximum total width to approximately 1,600 mm. Access at the rear includes a kick-sensor tailgate for hands-free opening and closing.

The cabin’s practical features extend to its numerous storage options. There are cup and bottle holders, pockets and other storage spaces throughout. Also, the inside handle of the rear doors can be used for clothes hangers or camping lights. In addition, the wide and long ceiling can be used as a storage area by hooking nylon straps or bungee cords across the passenger grips. Numerous hooks are also available to secure irregular-sized luggage, including bicycles. For smart devices, there are USB ports for the front and rear passengers, including a wireless Qi charging pad in front.

Additionally, a new 7″ DVD-AVX infotainment system with 6 speakers provides a range of connectivity options such as Mirrorlink, Miracast, AUX and Bluetooth. It also has AppleCarPlay and Android Auto (when officially available in Malaysia) connectivity so occupants can connect compatible smartphones and access apps from the dashboard. Voice command is also available for both variants of the RAV4 to enable management of certain features or hands-free telephony. On connectivity, the RAV4, like selected new Toyota models, are fitted with a telematics system that allows you to track your vehicle’s location. This is given free for the first year of ownership, and subsequently is subscription based.

Besides the usual array of safety features that are now pretty standard on modern cars e.g stability control, ABS, etc., the chief feature in both variants of the RAV4 is the Toyota Safety Sense (TSS) suite. The latest version of 2.0 consists of four driver-assistance systems to help make driving safer:

PCS: This system monitors the road ahead (using millimeter wave radar and camera) and when a frontal collision is likely, the driver will be alerted with an audible warning and image on vehicle meter display. Should the driver fail to take action to reduce speed or brake, automatic braking will be activated. Even if a collision cannot be avoided, the early automatic braking action will slow the car down and help to reduce the damage on impact.

LDA with LTA: A sensor and camera monitor the lanes on the road and should the car start to move off the lane (which can be due to the driver’s reduced concentration), an audible warning and image will alert the driver. If corrective action is not taken, the system will assist the driver by generating a small amount of force to the steering wheel to guide the car back between the lines of the lane.

Complementing LDA, LTA operates using the camera and radar to recognize lane markers or the preceding vehicle’s driving path. It estimates the vehicle’s position in the lane and then implements steering assist to remain in the lane, even on roads with curves. DRCC is to be active when LTA is used.

DRCC: This is a more advanced form of cruise control which can vary the cruising speed depending on conditions. When a vehicle is detected ahead, the speed will be automatically adjusted to maintain a safe gap, resuming the set cruising speed when there is no longer a vehicle in front. DRCC operates at all speeds, stopping when necessary (if the vehicle in front stops) and then moving off again automatically. This makes motoring, especially in congested traffic, less tiring.

Besides the camera used for TSS, there are also six other cameras around the vehicle. The first two are the Driving Video Recorders (DVR) mounted in the front and rear positions inside the cabin. The DVRs, with their wide field of vision, can provide evidence in the event of an incident. A G-sensor will automatically save and lock a recording segment if a sudden impact is detected.

The front DVR includes Front Collision Warning & Lane Departure Warning to alert the driver of another vehicle ahead and give a warning if the vehicle is deviating from the lane. These features can be deactivated if not required and supplement the TSS functions.

The other four cameras are installed around the body for 360º coverage for parking and manouevring in tight spaces. The views can be selected and the reverse view covers a large field of vision so the driver will spot obstacles or even little children directly behind the vehicle.

Other safety features and systems in the new RAV4 include Blind Spot Monitor (BSM) with Rear Cross Traffic Alert (RCTA) both of which alert the driver when other vehicles are in the blind spot during changing lanes and reversing. 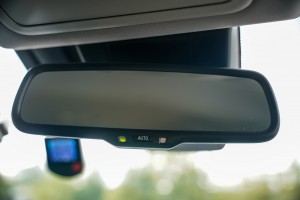 The RAV4 is also equipped with an Electro-Chromic (EC) rearview mirror. Sensors in the mirror monitor the surrounding brightness at night, particularly the intensity of light from the rear of the vehicle. If there is a vehicle coming from behind, its headlights will be detected and the rearview mirror will automatically dim to reduce the glare to the driver.

Last but not least, there are seven airbags, including one for the driver’s knees, and a Tyre Pressure Warning System to monitor tyre pressures at all times.