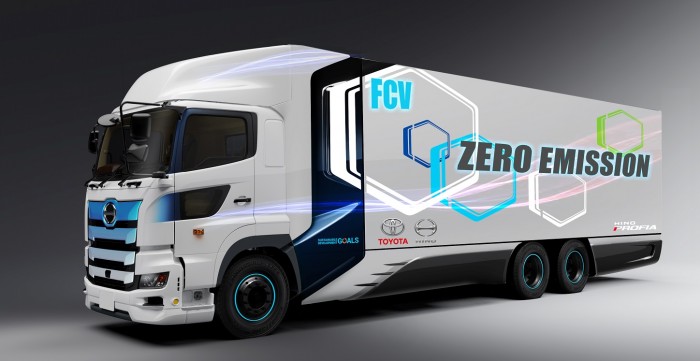 Toyota Motor Corporation and Hino Motors, Ltd. have announced that they will agree to jointly develop a heavy-duty fuel cell truck, and to proceed with initiatives toward its practical use through verification tests and other means. Hino is a well-known Japanese manufacturer of commercial vehicles and engines and is a subsidiary of Toyota Motor Corp. 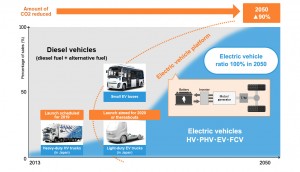 Toyota and Hino have agreed to take proactive action toward resolving global environmental issues as one of their most important corporate tasks. The two companies have declared ambitious goals to reduce CO2 emissions by 20501 and are developing electric vehicle technologies for widespread use in society. In order to achieve further reductions in CO2 emissions, major improvements will be required in the environmental performance of heavy-duty trucks, which account for about 60% of the total CO2 emissions from commercial vehicles in Japan2.

For the electrification of commercial vehicles, the optimum powertrain must be adopted to ensure both outstanding environmental performance and just-right practicality as a business vehicle in terms of cruising range, load capacity, and other aspects depending on the usage. Heavy-duty trucks are typically used for highway transportation; therefore, they are required to have sufficient cruising range and load capacity as well as fast refueling capability. For this reason, fuel cell vehicles that run on hydrogen with its higher energy density are considered effective.

The heavy-duty fuel cell truck in this joint development project is based on the Hino Profia, heavy duty cab-over truck, and is being developed to take maximum advantage of the technologies both Toyota and Hino have cultivated over the years. The chassis is specially designed with the optimum packaging for a fuel cell vehicle, and steps are being taken through comprehensive weight reduction to ensure a sufficient load capacity; the vehicle weighs 25 tons. 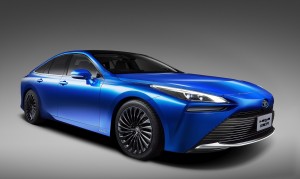 The powertrain is equipped with two Toyota polymer electrolyte fuel cell stacks that have been newly developed for Toyota’s next Mirai and includes vehicle driving control that applies heavy-duty hybrid vehicle technologies, developed by Hino. A new large capacity high pressure (70 MPa) hydrogen tank is being developed for this application. Also, cruising range will be set at approximately 600 km (integrated city and highway driving cycle), aiming to meet high standards in both environmental performance and practicality as a commercial vehicle. 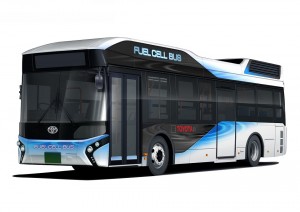 Toyota and Hino have positioned hydrogen as an important energy source for the future and have worked together on developing technologies and spreading and innovating fuel cell vehicles for over fifteen years since their joint demonstration trials of the fuel cell bus in 2003. Going forward, Toyota and Hino will further strengthen its partnership and accelerate efforts toward the realization of a hydrogen society.

*1 Toyota Environmental Challenge 2050 : Established in 2015, of which one part is the New Vehicle Zero CO2 Emissions Challenge, through which Toyota aims to cut its average carbon dioxide emissions from new vehicles by 90 percent (compared to 2010 levels).

Hino Environmental Challenge 2050 : Established in 2017, of which one part is the New Vehicle Zero CO2 Emissions Challenge, through which Hino aims to cut its average carbon dioxide emissions from new vehicles by 90 percent (compared to 2013 levels).

*2 Trucks and buses with gross vehicle weight of over 3.5 tons; Hino internal research, as of February 2020