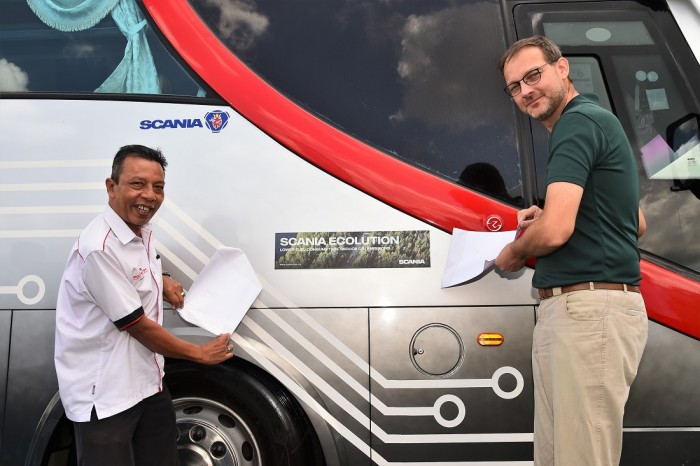 Politeknik Sandakan Sabah (PSS) has signed the Scania Ecolution Partnership Agreement, the first Educational Institution of Higher Learning in Malaysia to do so. The partnership was officially started with the signing of the agreement by Mr Tajul Ariffin Arif, Director of Politeknik Sandakan Sabah and Mr Tom Kuiphuis, Pre-Sales Director of Scania Southeast Asia at the campus in the Education Hub of Sandakan.

PSS was established in 2008 and is one of only two polytechnics in Sabah. It was fully facilitated in 2012 with its own campus and now offers Diploma in Agro-technology and Diploma in Aquaculture to SPM qualified students from all over Malaysia, with 85% of them from Sabah. 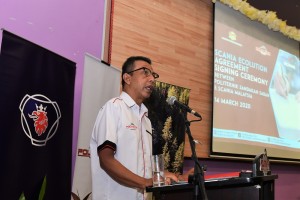 “We chose to offer these 2 Diplomas due to its close association with nature, especially with PSS Strategic Plan 2019 – 2023 of transforming its building complex into a Green Campus by 2023. We believe being part of the Scania Ecolution programme will to a certain extend help us towards our Green objective; to reduce the impact onto the environment by emitting less carbon dioxide (CO2) into the atmosphere via our Scania K360IB4x2,” said Mr Tajul.

PSS was very happy to be presented with this opportunity to be part of Scania’s programme that is significantly lessening the impact to the environment. It is a programme that will not only lower PSS’ coach operation cost but will also reduce its carbon footprint by lessening the emission of carbon dioxide (CO2) through the reduction of fuel consumption.

To be able to utilise the full potential of the Scania coach, the drivers have to have the right attitude when handling this technologically-advanced machine. PSS will be enlisting the drivers into the Scania Driver Training and Coaching services that will help change their mindset into believing that every individual driver matters and is part of a very big picture in the preservation of Mother Earth. 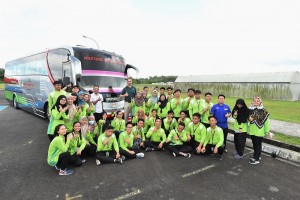 The Scania coach truly helps with the smooth running of all the PSS’ programmes be they in Sandakan or throughout Sabah, right up to Brunei due to the excellent uptime that it gives. Now with the Scania Maintenance contract and Scania Fleet Mangement System Control 10 subscription and the Scania Ecolution agreement that PSS has signed for, its coach operation is virtually hassle-free. Purchasing the Scania K360IB4x2 coach was a worthwhile investment that PSS has made and ensured the smooth transportation of PSS’ student state-side.

“With a population of almost one thousand students we need more coaches to transport them to and from scheduled activities away from the campus. The Scania K360IB4x2 that we purchased in 2012 is still running well and still gives us safety, comfort, reliability and fuel economy. We are already looking at securing another one more Scania coach very soon and anxiously waiting for the budget approval,” added Mr Tajul. 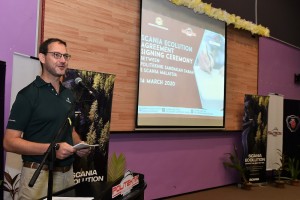 ”Scania has been introducing sustainable transport solutions for a long time, especially when it comes to the reduction of carbon dioxide and today’s signing ceremony is testament of Scania’s on-going drive towards the 2050 commitment in reducing the carbon footprint to net zero, stated Tom. Being the first educational institution in Malaysia has its prestige but also comes with the responsibility of leading others, setting examples and showing positive results for others to emulate,” added Mr Kuiphuis.

“Overall, I am very pleased with Scania’s after-sales services as I believe the commitment level of Scania towards PSS is satisfactorily executed and with the Scania Ecolution Agreement in force, we are set to realise our objective of achieving the Green Campus status by 2023. I sincerely hope that the little that we do at our campus towards conservation of the environment involving all our students will have a positive spillover effect onto the students’ circle of friends and family,” concluded Mr Tajul.