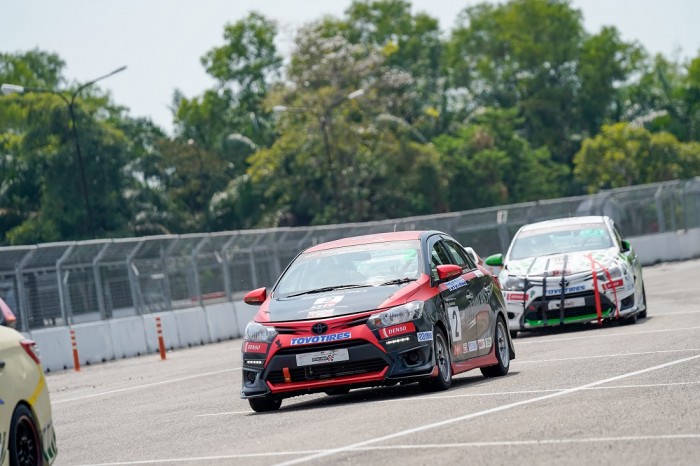 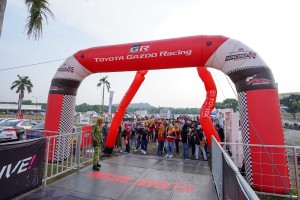 Round 3 of the Toyota Vios Challenge Season 2 was held at Stadium Batu Kawan in Penang last weekend and saw a dramatic Race 1 with lots of close racing action.

More than 40 racers competed in Round 3, which consists of two races and divided into three categories: Promotional for local celebrities, Sporting for amateurs and Super Sporting for professional drivers.

This is what happened in Race 1: 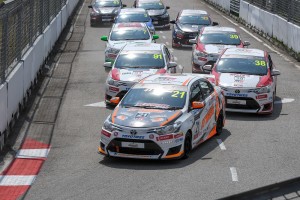 In this class, series leader Boy Wong stormed to victory in Race 1 at this 1.56 km street circuit, finishing ahead of Team Dream Chaser’s Brendan Paul Anthony and Team Nanoplus’ Keifli Othman. Wong made the most of his pole position to lead into the first corner and was able to stay clear of the jostling behind him which resulted in two cars retiring from the race. Fighting for second position, Brendan and Kegani Racing Team’s Kenny Lee were side by side into the first corner. 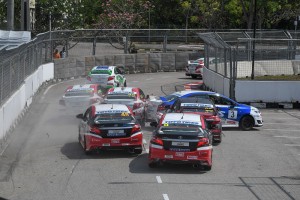 Lee found himself squeezed into the wall and rebounded back in front of team mate William Ho. That promoted Team Nanoplus drivers Keifli Othman and Eddie Liew into third and fourth positions, respectively, with Laser Motor Racing’s Alif Mohamed Hamdan in fifth.

“I had an excellent start and had the inside line going into the first corner. I’m not quite sure what happened but next thing I realized Lee was into the wall,” said Brendan Paul. “The racing conditions were extremely difficult with the heat.” 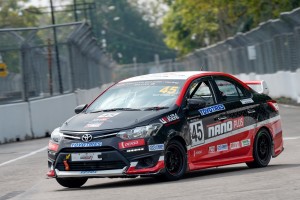 For Keifli, third place was a great result since he had started from the middle of the grid and was nursing a car that sustained damage during the official practice session on Friday. “With the collision happening in front of me, I was fortunate to have had a clear path through to continue an incident-free race,” said Keifli. 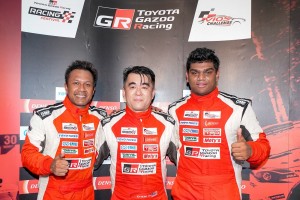 The Sporting Class race saw the most action. With just seven laps into the 22-lap race and in just a matter of two corners, the top five quickest qualifiers were essentially knocked out of contention. 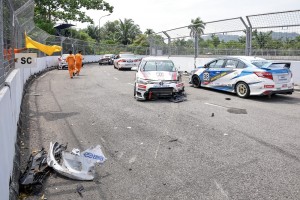 Pole position man Brendon Lim made the best of a good start to lead the race ahead of Kenneth Koh, 15-year-old Hayden Haikal, Dato’ Ken Foo Kwok Hsing and Shukri Yahaya. Lim initially built up a 1.5-second gap but as his pace slowed, Koh attempted to overtake twice, the first tearing Lim’s rear bumper while the second attempt pushed him into the concrete barrier. That gave Hayden, Foo and Shukri the opportunity to jostle for the top three positions but contact between Shukri and Foo eventually sent both cars into the concrete barrier and taking out Hayden in the process.

The safety car was brought out for five laps and after the wreckage was cleared, it was Distinctive Model’s Clement Yeo who inherited the lead from sixth position, followed by Team Nanoplus driver Patrick Tam and ST Wangan Racing Team’s Eric Yong. 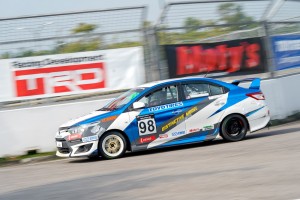 “I started from eighth position on the grid and I had a good start that promoted me to sixth,” said Clement. “With so much of action at the front of the grid I had a gut feeling something was going to happen and I just kept a safe distance. It was not a race I was certainly an unexpected result.” 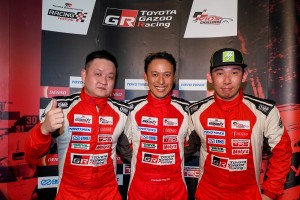 The celebrities were no less competitive in the Promotional Class which saw actress Diana Danielle clinching victory in the 20-lap race ahead of television presenter and comedian Nabil Ahmad and singer Akim Ahmad. 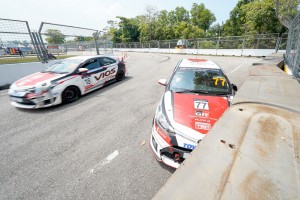 The race however, finished behind the safety car after two incidents on the track. Starting from pole position, Diana led into the first corner with Nabil, and singers Aiman Tino, Akim and Khai Bahar in hot pursuit. By the second lap Diana stretched her lead to 1.9 seconds ahead of Nabil but an incident involving Aiman brought out the safety car for seven laps.

When the race continued, Diana and Nabil were locked in battle again as the two stretched their gap at the head of the race to as much as 7.5 seconds ahead of a second battle taking place behind between Akim and Khai. Both Diana and Nabil had their fair share of near misses, clipping the concrete barrier but fortunately being able to continue.

With seven laps to the finish, the safety car was again deployed this time to allow track personnel to recover the wreckage of singer Nabila Razali who had a big run in with the concrete barrier. 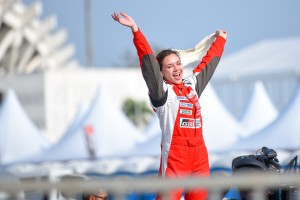 “I am just so blessed to have won today’s race given the fierce competition behind me coming from Nabil and Aiman,” said Diana. “To be honest I was more concerned about Aiman because he’s quick and he has the tendency to sneak up from behind but unfortunately he clipped the wall and had to retire from the race.”