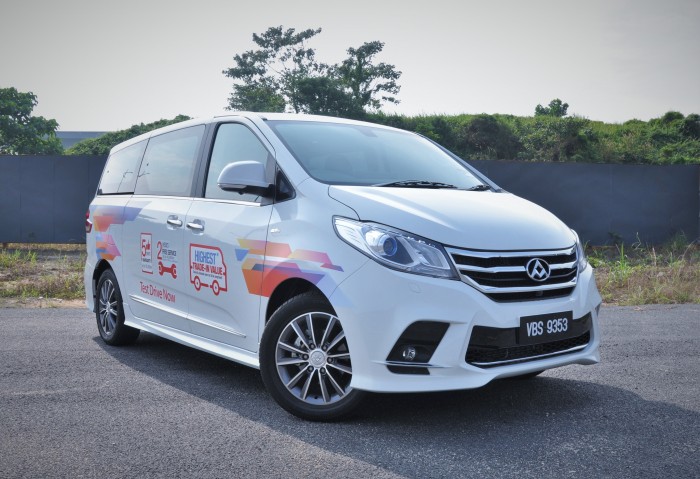 Let’s face it…. there’s no denying that the general perception of cars from China is average at best. But while that may hold true in some cases, most have made improvements in their product offerings. Where they usually fall short is in the branding aspect. Let’s take this Maxus G10 SE van which we reviewed. During our time with it, it had attracted some curious stares, not only because of the unabashed self-promoting livery, but because generally people were unfamiliar with the logo and the name, which elicited questions about it. And this is due to the awareness that has yet to reach enough of the general population.

The Maxus brand comes from the British-based LDV Group’s Maxus van model. When LDV Group went into receivership, its intellectual property was bought by China’s SAIC Motor Corporation (formerly Shanghai Automotive Industry Corporation), one of China’s ‘Big Four’ state-owned automakers that grew from its joint venture with Volkswagen, and later with General Motors.

But back to the G10 SE. This is a large 10-seater MPV that is locally assembled and distributed by Weststar Maxus; our review unit however, was a CBU example. And from the looks of it, the perception of China vehicles being copy-and-paste jobs is outmoded. SAIC has a large research and development facility in the UK, and although that is chiefly used for its other brands, there is nothing to stop it from applying its learnings to the Maxus range. 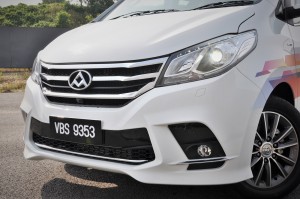 In the case of the Maxus G10 though, the styling was done by Torino Design of Italy, which has done work for SAIC, as well as other notable brands like Ferrari, McLaren, Suzuki and BMW. Nonetheless, as a people mover, there is no escaping the boxy profile of the G10 but it is hard to find fault in its looks unless you are really picky.

It is one of the largest MPVs in the market and is a literal mini bus, measuring 5,168 mm long, 1,980 mm wide, and 1,928 mm tall; wheelbase is 3,210 mm. But a body kit, LED daytime running lights and tail lights help to dress it up a little. Even if the headlights aren’t LED, they are HID xenon units and don’t look too bad.

The G10 SE is built with practicality in mind, with a 2-3-2-3 seat layout that allows easy walk-through access to the 3rd and 4th rows. All rows, except the last one, slide to allow more flexible adjustment of legroom. With the 2nd and 3rd rows placed just right, legroom is comfortable in all rows for average height adults. 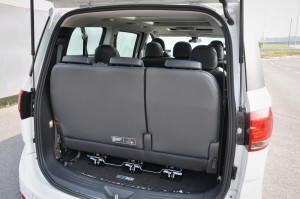 The backrest of 4th row splits 60:40 but its bench doesn’t fold correspondingly. It is a one-piece design which means you have to fold up the entire 4th row to make use of the rear cargo space. Alternatively, you can simply fold down one of the 4th row backrests for cargo but it’s not advisable to place heavy items on it in such a manner.

Cargo space is more than adequate whenever you don’t need to ferry more than six passengers. But with all ten seats occupied, rear cargo space becomes a rare commodity and you will have to get creative. Smaller items have a host of cubbies within the van to call home, some of which are large enough to house 1.5-litre bottles. The front door cards have two levels of pockets to lose many knick-knacks in; the floor under the front seats also have compartments, one of which to hold necessities like a hazard triangle and jack. 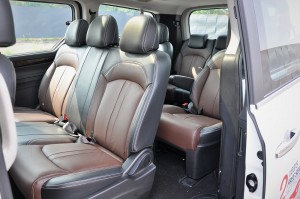 All the seats are leather and are decently comfortable. The leather is two-toned and is colour-coordinated with the dashboard and doors. The dashboard does get an additional faux wood trim to make it a little dressier. To add to passenger comfort, every row features dedicated cooling vents on the roof paired with LED cabin lights, with a central control built into the drop-down LCD screen in the 2nd row. Rear cooling can also be controlled separately by the driver in front. And where most vehicles will come with 12V or even USB ports for the convenience of rear passengers, the G10 SE builds in a 3-pin 220V outlet, which means you can plug in your gaming desktop, photocopier or even an electric oven. Most however, will just plug in a phone charger or laptop for practicality’s sake.

And in case you feel the cabin isn’t roomy enough, there is a panoramic glassroof for rear occupants to let light in. The front row gets a sunroof. Also up in front is a large 15″ display on the dashboard which on closer inspection, is split into a digital clock display and a touchscreen infotainment interface. 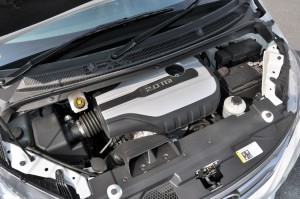 The Maxus G10 SE is powered by a 2.0L turbocharged petrol engine, unlike its closest rivals which rely on diesel power. The engine does put out a decent 225 hp and 345 Nm through the 6-speed ZF automatic transmission to the rear wheels. And while a petrol lump will not produce as much torque as a diesel at the low end, there are a good number of people who prefer to stick to what they’re familiar with i.e. petrol power, and not have to live with diesel clatter. Furthermore, the road tax for a 2 litre engine is at a rate that doesn’t hurt so much. 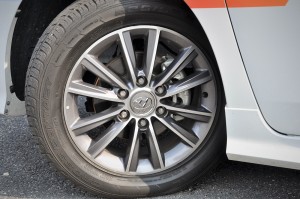 The benefit of having the G10 in rear-wheel drive is the small turning circle which allows this long and tall 10-seater to take a tight U-turn like a compact hatchback. And that is where the association with the hatchback ends as it will not handle corners like one. It also won’t dash off the line like one as it lacks the sprightly character of a diesel at low engine speeds. It gets decent in the mid-range when the turbo is actively working and it’s not difficult to learn to work it into a comfortable cruising speed.

The ZF gearbox works well for the most part, with seamless shifts. You can get the powertrain to act urgently (that is a relative term), but you will sacrifice fuel economy. That said, a few days running around the Klang Valley ended up with me recording an average fuel consumption of 14.1 litres per 100 km. 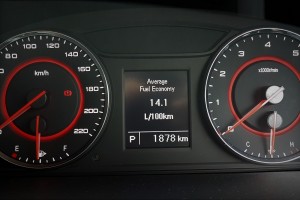 It terms of ride comfort, the G10 holds up well, providing a stable and relatively supple ride over Klang Valley roads. If you are coming from a sedan, you will need to give some concession to something that is longer and taller. It will not provide the sort of plushness you get from a sedan with the same price tag, but that sedan can’t squeeze in 9 passengers comfortably.

To make up for this, Maxus has added creature comforts such as powered rear sliding doors, keyless entry and start, cruise control, a multi-function steering wheel, automatic headlights, as well as a 360º view camera to assist in parking and manouevering in tight spots. The camera can also be called up with the press of a button on the centre stack. Video quality isn’t the best but it works as long as there is sufficient lighting.

There aren’t many choices of 10-seater MPVs in Malaysia, unless you settle for the commercial van variety, so the G10 SE is one to consider if you do need a 10-seater (or a 7-seater with lots of cargo space) that is of decent build. It is also worth considering if you don’t have a bottomless money pit, and you do not favour diesel.