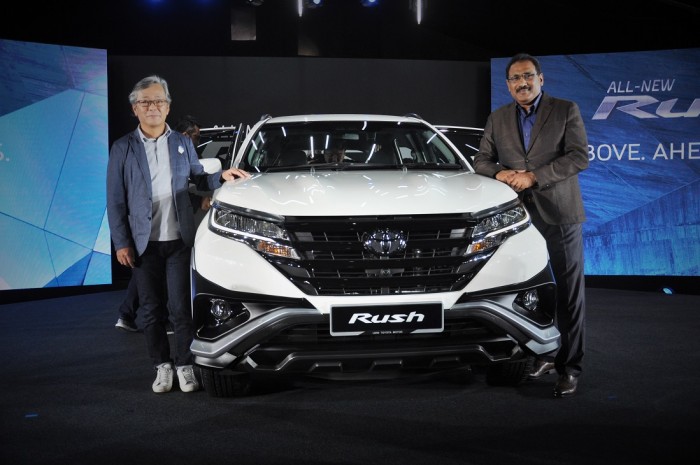 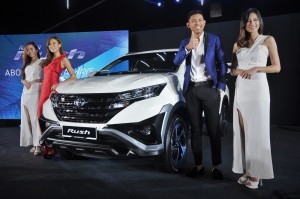 UMW Toyota Motor (UMWT) has launched the new Toyota Rush in Malaysia. This second generation 7-seater SUV will be locally assembled by Perodua, under contract (incidentally the Indonesia version is assembled by PT Astra Daihatsu), and deliveries to buyers are expected to happen in early 2019.

There are two variants available for the Rush – the 1.5 G and 1.5 S, with estimated retail prices of RM93,000 and RM98,000 respectively. Body colour choices are the practically named White, Silver Metallic, Dark Gray Metallic, Blue Metallic and Dark Green Metallic. All authorised Toyota showrooms are now accepting bookings for the Rush and it will be available in the showrooms starting January 2019. 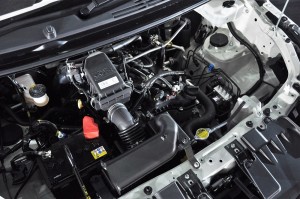 Both variants run on the familiar 1.5L 2NR-VE dual VVT-i engine paired with a 4-speed automatic gearbox, producing 105 PS and 136 Nm for the rear wheels (tyre size is 215/60 R17). The rear-wheel drive configuration allows the Rush to have a small turning radius of 5.2 metres. There is also the automatic stop-start function to improve fuel consumption; UMWT claims average consumption can be as good as 15.6 km per litre. 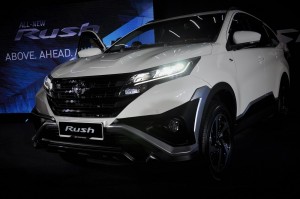 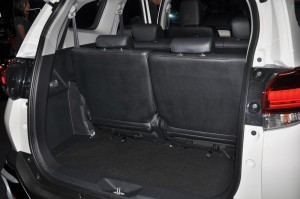 The seating configuration is 2-3-2, with the second row featuring 60:40 split-fold, slide and recline, as well as a one-touch tumble mechanism for easier access to the third row. The third row splits 50:50 and can tumble and fold in the same ratio, and offers greater carrying and seating flexibility. With the third row folded down, you have 217 litres of cargo space, and when the third row is tumbled forward, that expands to 514 litres. 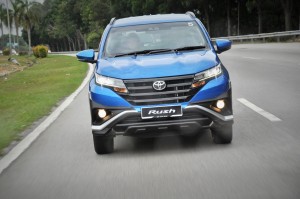 We had a go with the Rush on a drive around MAEPS, Cyberjaya and Putrajaya to get a feel of the vehicle after the launch. While the power numbers don’t look impressive on paper, it was sufficient to get the Rush going and keep pace with traffic. The gearing didn’t feel deficient and was fairly quick to downshift to maintain the momentum. We did have to rev it a little aggressively on some stretches but the engine felt robust albeit a little loud. There was also a short stint on sandy terrain where we had a bit of fun with stability control switched off. And despite all the idling and driving (we didn’t treat it as a frugal run), the average consumption hovered around 9 km per litre. 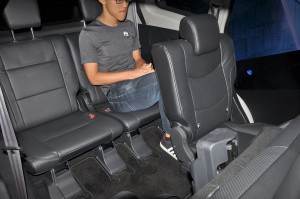 The third row seat was not too uncomfortable although the knees of someone of 178 cm height will be pushed against the second row’s backrest. It’s passable for tall adults on short trips but they’re more suited for the shorter passengers when it comes to long drives. On the upside, all seats can recline. The rear suspension is 5-link with coil springs and lateral rod and performed well to dampened most bumps and not make the rear-most passenger carsick. The roof-mounted air blower helps cool the rear rows quite quickly by accelerating the air blown from a dedicated vent on the dashboard. It may be a little loud on its highest speed setting but it wasn’t annoying.

The dashboard and interior trim feature plastics of contrasting colours. They may be moulded plastics with faux stitching but they break the monotony and at a glance, don’t look too bad.