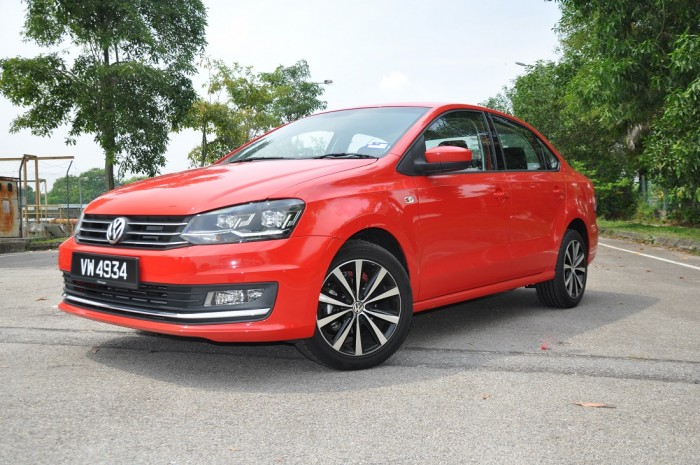 This is the B-segment car formerly known as the Volkswagen Polo Sedan, and the Vento Highline is the top variant, sporting a turbocharged engine instead of the bigger but less powerful naturally aspirated one in the Vento Comfortline. The renaming of the Polo Sedan to Vento not only differentiates it from the hatchback sibling, it also saves a few calories by reducing a word in its name. 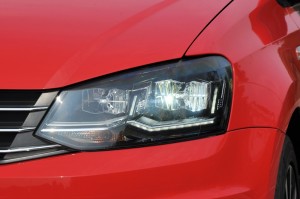 Though the name is different, the underpinnings of both models are the same. Looking at it from the front, the Vento looks like the Polo hatchback. Fortunately for the Vento, Volkswagen didn’t do what many others did with hatchback-derived sedans i.e. slap on a tail and call it ‘handsome’. The Vento has been stretched to give it proper sedan proportions that also resulted in a more spacious interior compared to the Polo.

The Vento literally gets a second wind (living up to its namesake in Italian and Portuguese) with a minor upgrade in the headlamp department from halogen to full LED with daytime running lights. 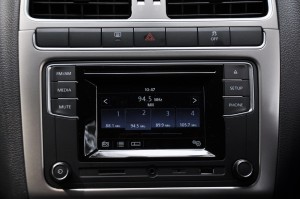 The other obvious upgrade sits in the cabin. The Vento now sports a larger 6.5″ touchscreen display. This ‘R340G’ entertainment unit is equipped with Bluetooth, USB and iPod interface, and an SD card slot, features we consider as standard in modern entertainment kit. What’s not yet considered standard in cars in this price range is Apple CarPlay and Android Auto connectivity, which the Vento now has with this new head unit (it also has MirrorLink if you’re inclined to use that).

The rest of the cabin is not too different from class rivals but can be considered fuss-free, design-wise. There is liberal use of textured plastic and metal-coloured trim, and the slightly flat-bottomed steering wheel gets a leather wrap and piano black detailing to make it feel more premium, which works because the wheel is the most-touched item in the car. 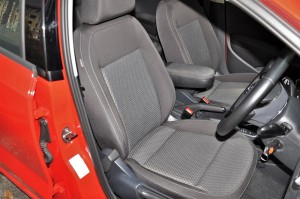 The other part most touched would be the seats and I can’t say these are as good as the steering wheel. The driver’s seat feels a little too flat for my liking but it could be because I’m lumpy in all the wrong places. But very few cars in this price category will have seats that feel premium.

With its adequately elongated body however, the rear passengers get to enjoy more legroom and other little creature comforts like a set of rear cooling vents, a fold-away cup holder and fairly sizable door pockets. Unfortunately, if you’re hoping for an armrest, you will have to ride shotgun and elbow-wrestle with the driver for the tiny one in front.

Rear luggage space is claimed at 454 litres and doesn’t break any records but it will meet the requirements of most owners. 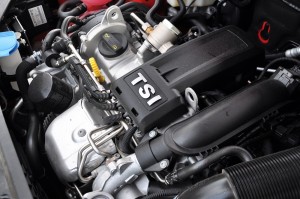 What makes the Vento Highline stand out from class rivals is the employment of a turbocharged engine. But while the 105 PS that this 1.2-litre TSI engine produces isn’t class-leading when compared to equivalent cars with 1.5- or 1.6-litre naturally aspirated engines, it does save you on road tax. Furthermore, the 175 Nm of peak torque provides for some excellent acceleration and some fun driving, although top speed officially taps out at 184 km/h.

The 7-speed dual clutch DSG comes with manual shift override but no paddle shifts, which honestly, aren’t sorely missed as the gear changes were up to expectations (granted I wasn’t a speed fiend during the test period). According to Volkswagen, the dry dual-clutch DSG has been beefed up with new hardware and software to increase durability and reliability. I didn’t get to test it over the long-term but for the time I had the car, the gearbox rarely disappointed in city traffic or on the highway.

The Direct Shift Gearbox is basically two sets of manual transmission packed in one and always has the next gear ready. This is great when barreling down open roads but when you start creeping in slow urban traffic, you will sense some jerkiness not uncommon for an automated manual transmission.

But on clear roads, you will appreciate the quick and smooth gear shifts and acceleration. It won’t go so fast as to press your eyeballs into your brain but you can keep up with some bigger-engined sedans with confidence (at least until the diminutive 1.2-litre lump runs out of puff). 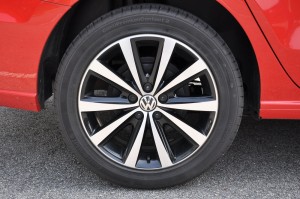 Ride quality and handling is where the Vento stands out from its rivals. At higher speeds, the Vento feels stable and refined, similar to a more expensive ride. The ride quality is on the firm side but still feels comfortable, as the suspension competently dampens road imperfections. The refinement and composure gives you confidence in tackling winding roads at a higher speed than you would, and this is where the Vento trumps others in its class by a clear margin. Try a  high-speed sudden lane change with the others and you will see how lacking in composure they are compared to the Vento.

When moving at legal speeds, the cabin feels pleasant with minimal noise intrusion but wind noise builds up once you break the speed limit. Maybe that’s engineered on purpose to keep you from misbehaving, but in general, the Vento has a solid feel.

The Vento Highline includes four airbags, Electronic Stability Control, Anti-lock Braking System, Hill-Hold Control, cruise control, and Intelligent Crash Response System (ICRS). ICRS is activated in a crash and will shut off the fuel line to minimise the risk of fire and explosion, switch on the hazard lights, and unlock the doors to minimise the risk of trapping the occupants in the car. The Vento also has a 5-star ASEAN NCAP rating.

Furthermore, the Vento Highline has remote-operated power windows to allow for a cool-down before you step into the car. The other cool feature it has is the glove box, which literally has a cooling function.

The sub-RM100,000 B-segment sedan category is a price-sensitive and competitive one, but the Vento is a good alternative for those upgrading from the entry-level Asian marques either because of a growing family or growing bank account.

The Vento Highline is priced RM88,488 (on the road without insurance), and comes with a 5-year warranty, 5 years roadside assistance, and 3 years free maintenance. And if you book one before 30 June 2018, you get savings of RM10,000 (subject to terms & conditions).