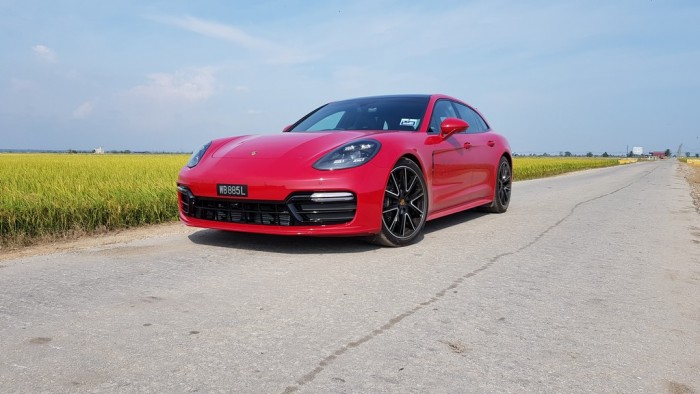 The Porsche Panamera or the latest variant, the Panamera 4 Sport Turismo, which is the ‘Shooting Brake’ version of the Panamera, and the subject matter for today, would most likely be the choice of a Malaysian businessman, who wants a more ‘sporty’ performance from his ‘business car’. The other choices open to this same Malaysian businessman would be of course the Mercedes-Benz S Class, or the BMW 7 Series, both of which are great ‘business cars’ too, besides the fact that these two alternatives are locally assembled, and cost approximately half the price of the Porsche. 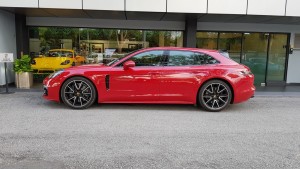 In terms of power, the three are quite well matched, and the power, acceleration times and top speeds are very similar. The torque numbers for the Porsche are higher due to the turbo-charger unit, but for all practical intents and purposes, they are all similar. Thus, purely from the specifications and price perspective, what the Porsche presents is firstly, a car that is close to double in price, and of course, a very different-looking car. The businessman in you would probably ask you to go for the Mercedes-Benz or the BMW 7 Series, but the boy-racer in you would probably make you want to go for the Panamera, if not the Sport Turismo. If you are confused, maybe you should read on.

The Porsche Panamera 4 Sport Turismo does have the size befitting the stature of a businessman, being all of 5,049 mm long, low slung at 1,428 mm high, and a long wheelbase (centre to centre distance between the front and rear wheels), can seat four adults comfortably, pampers both driver and rear passengers, and finally, it is a Porsche. In terms of overall length, it is about 5 or 6 inches shorter than the Mercedes-Benz S Class and the BMW 7 Series, but it is the widest of the three.

As a ‘business’ car, you can of course choose to be driven around by a driver, but if you have to drive it around yourself some of the time, you might want to check out the Porsche Panamera 4 Sport Turismo – It definitely is more fun to drive than either the S Class or the BMW. All right, you probably can afford both a ‘regular’ sedan like the BMW 7 Series or the Mercedes-Benz S Class, and a Porsche 911 at the same time, which is not a bad proposition, as you can keep your business and leisure cars separate, but what if you want to only have one, for whatever reason?

We got a car from Sime Darby Auto Performance, the local distributors for the Porsche brand, for a day, and decided to take it for a quick trip to Sekinchan for lunch and to buy some mangoes from Mango King, while trying it out on some highway and trunk roads. 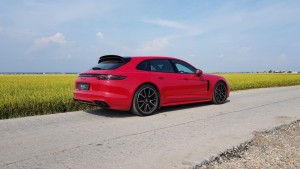 The Panamera 4 Sport Turismo is what Porsche would like us to describe as a ‘shooting brake’. Built as an off-shoot of the Panamera, the Sport Turismo would be what most people refer to as the ‘wagon’ variant. According to Wikipedia, the ‘Shooting Brake’ originated as an early 19th century British term for a vehicle used to carry shooting parties with their equipment and game, hence the additional space at the back of the vehicle. The term was later applied to custom-built wagons by high-end coachbuilders and subsequently became synonymous with a station-wagon or estate-like car. But to separate the Panamera 4 Sport Turismo from the lesser crowd, we shall continue to refer to it as a shooting brake. 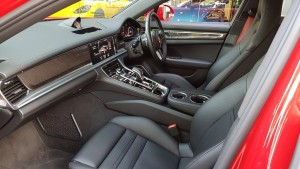 I had two passengers with me, and both of them commented positively on how comfortable and quiet the Panamera 4 Sport Turismo was from the very onset of the ride. There are a few driving modes, and we were on Comfort mode, which is for relaxed driving styles – personally I found the Normal mode to be on the firm side of comfortable, without the suspension wallowing, normally associated with soft suspensions. The comfortable yet firm ride is a tribute to the design engineers who must have played around with the spring, shock absorber and stabilizer bar settings quite a bit to achieve this. I tried the other settings, Sport, and Sport+, but didn’t try the ‘Individual’, which basically allows you to select what you want for each of the parameters. With my passengers in mind, the base Normal setting was best. The pre-Hari Raya traffic was quite heavy, and with so many ‘weekend’ and ‘once-a-year’ drivers on the road, I generally kept to within the speed limits. The super-quick acceleration was fun though. 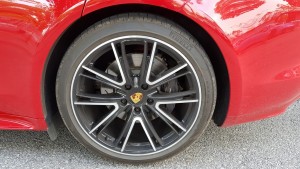 With all wheels driven, handling in the Panamera 4 Sport Turismo is a no-brainer, and despite its size and its weight of a little over 2.0 tonnes, it is very agile. The huge 21-inch wheels with low profile tyres provided almost too much grip – and despite some ‘quick’ driving on some of the quiet and slightly winding stretches, the car never even faltered throughout the journey. Where it was safe to do so, I opened up the throttle just a little bit, and the response was immediate. For the record, the Panamera 4 Sport Turismo has a turbo-charged, direct injection, 3.0 litre V6 engine that provides 330 horsepower and 450 Nm of torque. Power is transferred to all four wheels through an 8-speed Direct Clutch transmission. Zero to 100km/h acceleration is claimed at 5.3 seconds, while the official top speed is 259 km/h. Fuel consumption is rated  at 7.8 to 7.9 litres per 100 km (combined, NEDC), but under real world conditions one should expect around 12 to 14 litres per 100 km, depending on how you drive. Anyway, if you have to ask, you probably cannot afford this car. We got an average of 14.3 litres per 100 km for our drive, if you must know.

Handling is excellent, and I wouldn’t expect any less than this from any Porsche. The power is easy to handle, and the ride is very good. This is thanks to the double wishbone suspension at the front and the multi-link arrangement at the rear. If you are an exuberant driver, you can opt to use the paddle shifters that are conveniently at hand, but for me, just relying on the gearbox to do all the changing was good enough. 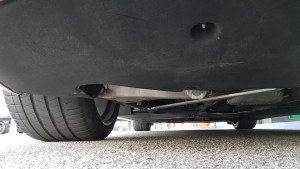 If you would care to look under the car, you will note the heavy usage of aluminium parts for the suspension – it is a known fact that reducing ‘un-sprung’ weight (i.e. weight that is not supported by the springs, such as the lower arms, the links and the wheel hubs, wheels and brake discs and calipers) will improve car handling. For Porsche, handling and driving performance would a given. Elsewhere, there are also aluminium parts – these include the front end and the bonnet, the entire floor pan assembly, and the tailgate.

The brakes are flawless, and one gets this confident feeling that one can stop on a dime if necessary. The 8-speed transmission is seamless, and you probably will not notice gear changes unless you are looking out for it. At regulation speeds in top gear the engine is barely turning over, and driving is effortless. At the same time, the car is immediately responsive to throttle should you need to get away from anything or anyone fast. Changing the driving mode is easy, either from the screen or by twiddling the little knob on the steering wheel.

The V6 doesn’t sound as good as the V8, but in terms of performance, the turbo-charger makes up for it all with the torque which comes in much earlier than a naturally aspirated engine. Besides, the under-3,000 cubic capacity means huge relief in terms of Malaysian road tax compared to a 4,000+ cc engine. This augers well for secondhand value of the Panamera 4 Sports Turismo later when you want to upgrade – at least the poorer people who can only afford to buy this car second hand will not be daunted by the road tax payment, and this in turn will enhance the resale value.

Outside, the shooting brake look is a little out of the ordinary – you either like it or hate it. I happen to like it, but if you don’t like it, you can always go for the ordinary sedan Panamera. The Panamera 4 Sport Turismo looks great from the front, but you may not be able to tell it apart from the normal sedan-type Panamera. I think it is most awesome when viewed from the side. 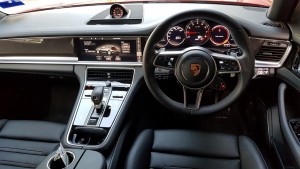 Inside, the layout is similar to the Panamera, but with some ‘sporty’ elements such as carbon-fibre inlays, and such. Leather is used extensively, with plenty of hand-stitched finishes. For convenience there is a large screen that provides all kinds of driving information, and serves as your audio screen as well. The seats hold you well, and the centre console looks so classy – you not only get it at the front but for the rear as well. The Panamera Sports Turismo rear seat configuration comes with two options – you can opt to have a centre console, in which case it becomes a four-seater, or you can have a centre seat instead to make it a 4 + 1 seater.

The rear seats in our test car are two individual seats (four-seater arrangement), and each one has its own electric controls for fore and aft movement, plus reclining and lumbar controllers. Both the front seats are also electrically controlled. 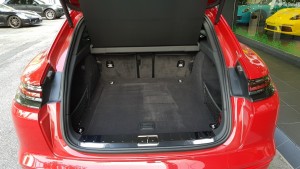 The rear boot is a bit of a shocker too – we stopped to buy some fruits and other stuff at Sekinchan, and when I opened the boot to load stuff, I was pleasantly surprised at the length and the depth. This enormous boot of 520 litres capacity will easily take four golf bags, and if necessary, the rear seats can fold forward to provide stowage for long articles. In addition, the opening and closing is electric.

If you take the cost out of the buying decision, the Porsche Panamera 4 Sport Turismo wins, because other than the prestige of owning a Porsche, it is actually a great car that you can drive daily to work and back. Just for the record, depending on the options you select for customizing, the Porsche Panamera 4 Sport Turismo retails at between RM990,000 and RM1,125,000.