The Formula 4 Southeast Asia (F4 SEA) 2017-18 championship season is coming to a close with the finale happening in Sepang, 13 – 15 April 2018. The Malaysian drivers in F4, consisting of highly talented, up-and-coming racing professionals Nazim Azman, Isyraf Danish, Arsh Johanny and Armand Johanny are all set to deliver their best in front of home fans.

The season finale will see Malaysian drivers competing in the fifth and final round seeking to end the season in a blaze of glory. The finale from April 13-15 will feature six races in which the Malaysians are aiming to dominate.

“Apart from being the last round to create an impact this season, Nazim Azman, Isyraf Danish, Arsh Johanny and Armand Johanny will have to push themselves to the edge in their quest for success,” according to F4 SEA promoter, Peter Thompson.

For the Malaysians, finishing on a high in the final round will significantly raise their confidence levels as they pursue their dreams to be world-class racing drivers.

“I’m looking forward to the final round which will be extremely competitive. All the drivers on the grid will have the same thoughts on their minds, everyone will be aiming to win or at least make the podium,” said Nazim Azman, who hit the headlines earlier this season after a blistering victory in the opening F4 SEA round in Sepang.

Nazim, who also competes in Europe, along with other Malaysian drivers, will be up against the likes of Daniel Cao (China), Kane Shepherd (Thailand), Ugo De Wilde (Belgium) and other foreign competitors.

“We were very excited watching the earlier rounds which were all competitive and featured high quality racing. The action will continue in the next round and it is our hope that racing fans will come out and support these young talents”, said Faridah Ali, Head of Retail Business at Petron Malaysia. 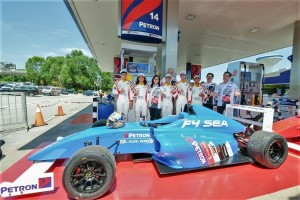 Petron is the official fuel and engine oil partner of the F4 SEA Championship, and seeks to promote Asian auto sports and help develop local racing talent. “We are pleased how the race has turned out this season and congratulate the AAA group promoters of F4 SEA on their successful season. We are proud to fuel this Championship with our most advanced product innovation – Blaze 100 Euro 4M complemented by our engine oil, Blaze Racing Fully Synthetic. This partnership allows us to prove the top-notch quality of our fuels and lubricants are not only suitable for the everyday motorists but a right fit for formula racing,” Faridah added.

Petron made its mark launching the first and only 100 RON premium gasoline in the Malaysian market in January 2016. Blaze 100 is formulated with TriAction Advantage, a triple action formula that delivers better power, better engine protection and better mileage, providing excellent engine responsiveness, optimum power and faster acceleration. Blaze 100 is made in Malaysia, at Petron’s Port Dickson Refinery.

The Formula 4 SEA event supports the Malaysian Championship Series (MCS) when it stages the finale of the Championship from 13 to 15 April 2018.

Entrance to the race is free and everyone is encouraged to give support to the Malaysian drivers.