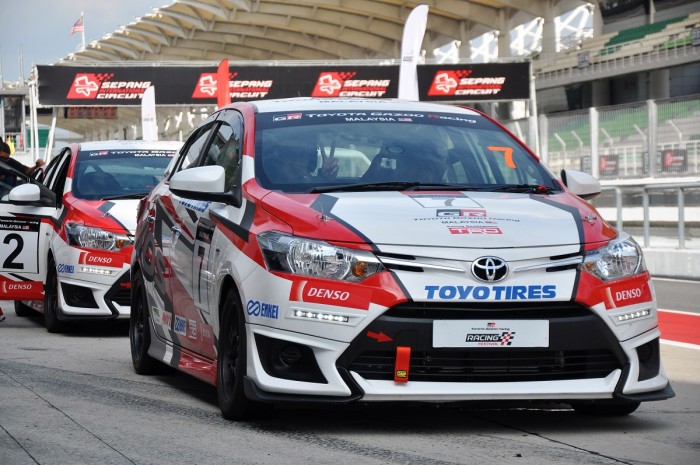 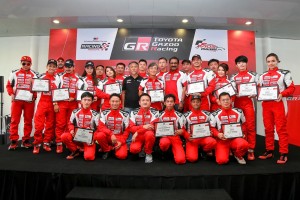 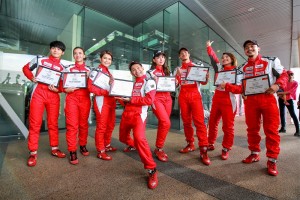 The former list of names are a part of the 24 novices who recently graduated from the Vios Challenge Racing School, in preparation for the upcoming Vios Challenge. These celebrities will be competing the in the Promotional Category (the other 2 categories being Super Sporting, Sporting Category), which also includes (surprise, surprise!) Mr Akio Takeyama, Deputy Chairman of UMW Toyota Motor, who also graduated from this Vios Challenge Racing School and like the others, received his certificate in a graduation ceremony at the Sepang Circuit.

When UMW Toyota Motor (UMWT) first launched the Vios Challenge in April, there were only 30 Vios race cars available but due to unexpected demand, 10 more cars were added (there’s apparently just 1 car left to be taken). The Toyota Vios meant for the Vios Challenge is the base 1.5J with a 5-speed manual transmission. The car is prepared for racing by Wing Hin Motorsports and is stripped out and roll-caged. You still get air-conditioning and power windows, and the dashboard is largely intact. But there’s no entertainment unit and no seats for rear passengers.

The car’s engine, transmission and ECU are the same as a road-going Vios 1.5J (even the gear knob is unchanged), except that this race car gets a Toyota Racing Development (TRD) limited slip differential and clutch. Also upgraded (necessarily) are the exhaust and suspension systems from TRD, wheels from Enkei, TR1 tires from Toyo Tires, brake pads from Endless (the rear brakes are still drum, by the way), and racing seats and steering wheel from OMP.

These minor upgrades push the power output up by about 10 hp over the standard 107 hp. It might seem down on power and slow on paper but that’s not the point. This is a one-make race so every racer is on equal mechanical footing and what determines the better driver is the talent, skill and discipline (and perhaps weight). Furthermore, these cars will be run on street circuits which may not see all of its horsepower fully utilized. But spectators can expect to see close wheel-to-wheel racing. 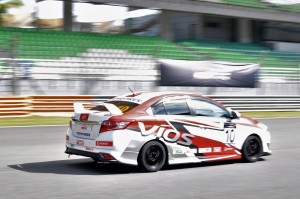 Last week, members of the motoring media were given a chance to lap the Sepang Circuit with this Vios and as far as I know, everyone got out of the car smiling; many of us have driven Sepang in cars more powerful than a Vios.

If you’re taken by this car, UMWT recently made available the Vios Sports Edition that’s inspired by this.

As mentioned, the Toyota GAZOO Racing Festival and Vios Challenge will be held on 12 – 13 August at the Batu Kawan Stadium in Penang. Entry to this festival is free. Aside from the race, there’ll be celebrity performances, test drives, food, and also a preview of the upcoming C-HR crossover.

Information on the Vios Challenge can be found here.