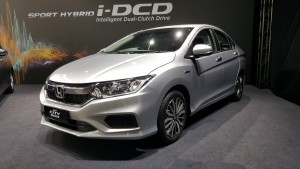 Subang Jaya, 24th July 2017 – It’s planned to be a hybrid and the main purpose is to allow for a smaller carbon footprint, but it seems to me that the new Honda City Hybrid, launched today by Honda Malaysia, will carve its own niche as another boy racer’s favourite, if my prediction is correct.

Already, the Honda City Hybrid shares a joint position with the Jazz Hybrid, launched a little earlier this year, as a compact hybrid under RM90,000, but the drive train is something else.

The drive train of the City Hybrid is exactly the same as in the Jazz Hybrid, i.e. a 1.5 litre DOHC (Double Overhead Camshaft) Atkinson Cycle i-VTEC engine, coupled with a Double Clutch Transmission (DCT) with Integrated High Power Motor. The combination allows a delivery of up to 137 PS of power and 170Nm of torque. This output is equivalent to that of a 1.8 litre engine. (This brings to mind that the Proton Putra and the Satria GTi of the 1990’s, two very popular, reasonably-priced high performance cars of that time, had 135 PS of power).

With the DCT delivering zero transmission slip and super-quick shifting times, and paddle shifters being included as standard equipment the City Hybrid certainly is a package that promises a whole lot of driving fun that will appeal not only to the younger set, but to those who want a little bit of a sporty performance every once in a while, but are constrained by budget. I had a bit of a go with the City hybrid earlier today, immediately after the launch, and found it to be quite ‘perky’, or raring to go. Acceleration is good – the traffic situation in Subang Jaya wasn’t exactly conducive to high speed driving, so you will have to wait for a proper test review.

However, if you want to use it purely as a hybrid because you are one of those who believe in reducing the carbon footprint caused by fossil fuels, you can drive the Honda City Hybrid with a light foot, and get the rated fuel consumption of 3.9L per 100 kilometres (based on UN R101 test result). 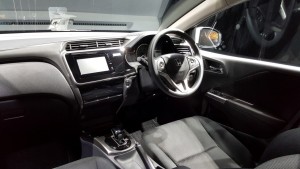 For those not in the know, the hybrid system on the Honda Jazz and City are a paradigm shift from the previous hybrid systems, and this includes the use of lithium-ion batteries. And just in case you need to know, Honda Malaysia offers an 8-year warranty on the battery-pack, in top of the normal 5-year, unlimited mileage warranty for the rest of the car.

The introduction of the hybrid extends the Honda City variant range by one more, offering more choices to the City lovers. The normal City was launched in March this year, and it is already a great success, recording over 12,000 units in sales over just four months.

With the lithium-ion batteries being compact in size, the new Honda City hybrid maintains its 536l boot size, this capacity being the same as the gasoline-powered City, and the largest in its segment. 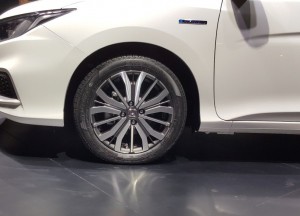 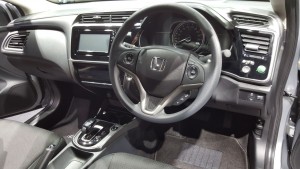 Colour options are Lunar Silver Metallic, Modern Steel Metallic and White Orchid Pearl. Priced at RM89,200 (On-the-road without insurance), the new Honda City will be available for test driving from mid-August onwards at selected Honda Sales Outlets. Jut in passing, the Jazz Hybrid which, as I mentioned earlier, has identical mechanicals, is already available for test driving.

My overall take on the new Honda City Hybrid is that it is currently probably the best option for a hybrid vehicle – in terms of brand, it is a Honda, with an equally good reputation for quality and advanced technology. However, due to the way it is packaged, it can also gain popularity, or a place in the hearts of the younger set – mark my words.