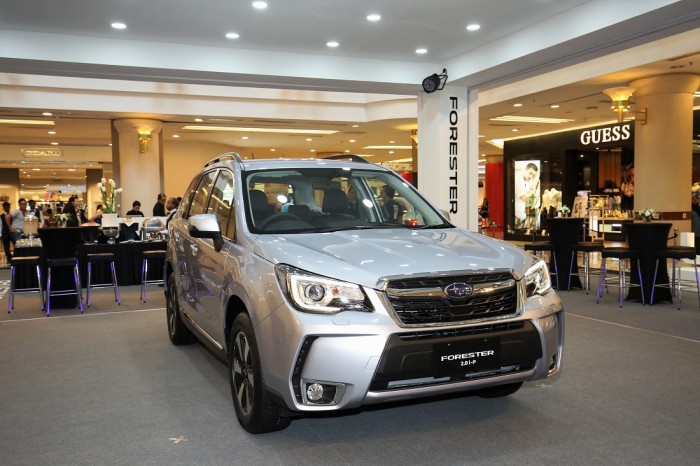 Subaru is a niche player as far as automotive manufacturers are concerned but that doesn’t stop them from making some great automobiles. As a small company, it’s filled with people who are passionate about motoring; this is the company known for its boxer engine, symmetrical all-wheel drive, championship-winning Impreza rally car and a dedicated following. This here is the 4th generation Subaru Forester crossover, built on the famous Impreza platform. Launched in Malaysia in early 2016, we review it to see how it’s held up to the competition. 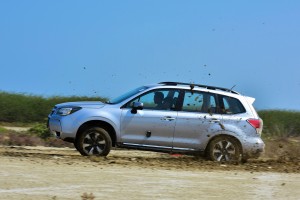 This facelifted 4th generation Forester has 2 variants which are locally assembled i.e. the 2.0i and 2.0i-P; the turbocharged XT variant remains CBU Japan for practical reasons of volume and cost. The 1st generation Forester was made available in 1997 and looked like a tall wagon with a utilitarian demeanor. That wasn’t a bad thing as there were people looking for a vehicle like that.

And over the years Subaru decided to keep that formula, staying true to the wagon profile but making it look less “Farmer Joe” and more “urban”. In today’s scheme of things with curvy crossovers and SUVs, the Forester stands out for being “square” but in a good, semi-masculine way. Speaking of squares, there are hints to the boxer engine beneath in the shape of the LED surround light in the headlight and the tail light cluster, both of which form a box when joined.

The review unit is the 2.0i-P, with P being Premium. The facelift enhancements apply only to the Premium and XT variants. Most notable is the chrome grille, re-profiled front bumper with vertical LED daytime running lights and new fog light housing. The rear spoiler has been wind-tunnel tested and is supposed to improve aerodynamics. However, the biggest improvements can’t be seen; we will get to that. 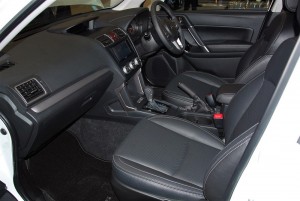 The Forester 2.0i-P gets leather seats, with the front seats getting an 8-way powered adjustment; the driver’s seat also gets a memory function. The driver also enjoys a new steering wheel, with mounted controls, and meter cluster with TFT LCD display as well as an enhanced multi-function display on the dashboard. The seats offer good support, with the rear bench comfortably fitting 3 thanks to the low middle hump. There is also ample legroom and headroom for tall adults at the back, making it even more spacious for a family with young children.

Interior trim is kept simple with silver and glossy black accents and bits of leather found on the door handles and center stack. Dual zone climate control, push start button and a 6-speaker touchscreen audio system with MirrorLink are also standard. The Forester also comes with a powered tailgate with height memory which is a convenient feature for parking in spaces with restricted height. Cargo space is a small-ish but acceptable 422 liters and has a tonneau cover for privacy.

The Forester uses a 2-liter horizontally opposed 4-cylinder engine with maximum output of 148 hp and 198 Nm. With the cylinders in a horizontal layout and each pair moving in opposing directions, this allows for the engine block to be flatter, like a box; one of the characteristics Subaru is known for. This also allows for more flexibility 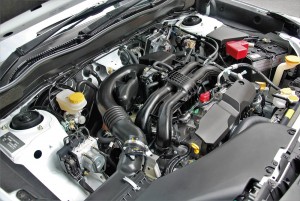 in packaging the engine bay to optimize weight distribution. Boxer engines have been applied in light aircraft as there is reduced vibration. Coincidentally, Fuji Heavy Industries (to be called Subaru Corporation in 2017), of which Subaru is part of, started out as an aircraft manufacturer.

Coupled to the engine is the Lineartronic CVT (continuously variable transmission), with paddle shifters, and another Subaru special – the Symmetrical All-Wheel Drive system (SAWD), with active torque split. The use of a symmetrical system (with equal length half-axles) also allows for better weight distribution and balance. Subaru didn’t start out with their cars sporting all-wheel drive; it’s said that a customer didn’t want to use 4-wheel drive SUVs for site visits due to economic reasons so Subaru fitted a car with SAWD and the rest as they say, is history.

Riding on 17″ wheels, the Subaru Forester is one of the most comfortable crossovers in its class as Subaru has tweaked the suspension set-up with stiffer front cross member and improved coils and dampers as well as changing the rear suspension alignment. There is a sensation of being buffered from the terrain while still knowing what the terrain is. Driving on the highway, the Forester felt stable and composed; quick changes in direction will make the tall-ish body lean but not to an uncomfortable degree. 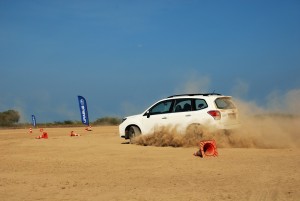 Engine power is delivered via the Lineartronic CVT which, while it still has hints of the typical rubber-band feel, is actually one of the better CVTs I’ve tested. But more importantly, it works well for the general user and CVTs are generally more economical on fuel consumption. The Forester 2.0i-P is equipped with the SI-Drive (Subaru Intelligent Drive) feature, which offers 2 drive modes – Sport and Intelligent.

Sport mode is self-explanatory; it maintains the engine and transmission in their most efficient setting until it detects your need for more power. In other words, stomping on the throttle gets things going quickly. Intelligent mode optimizes efficiency and is the recommended setting for city driving. Subaru also recommends the Intelligent mode for tricky driving conditions such as loose gravel or snow. 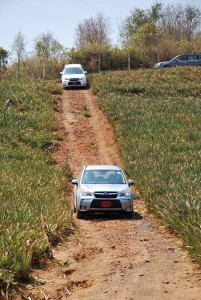 Another driving feature is the X-Mode which basically manages all the essentials like throttle control, transmission, all-wheel drive torque split, hill descent control and the vehicle dynamics control. This is the system that allows you to be a little bit more adventurous and take the road less driven (to a certain extent; remember you have road tires). Throttle is controlled so power delivery is smoother and doesn’t surprise you, and the transmission is kept in lower gear with 25% more clutch pressure on the all-wheel drive to control rotational differences between the front and rear wheels.

On an off-road jaunt into sandy, gravelly and steep terrain, the X-Mode was put through its paces and performed admirably. All of its features like Hill Descent Control, traction control, etc were activated at some point without hassle to help the car find grip. Take note that X-Mode only works up to speeds of 30 km/h so don’t go barrelling down a trail and expect magic to save you.

Aside from the X-Mode, SI-Drive, differential control, powered tailgate, rain-sensing wipers, headlight washers etc, the Forester 2.0i-P also steering responsive headlights which shines in the direction of your turn. But most notably, and this results from thought of those with active lifestyles, the Forester comes with PIN access.

Oftentimes when you partake in outdoor activities, you’re forced to carry your car key fob with you. This puts your key fob at risk of water and fall damage, or loss. Think of the inconvenience when that happens at a most inconvenient location. PIN access allows you to set a 5-digit code on your Subaru, deactivate and keep the key fob IN the car, lock it, go out and have fun then come back and access your car with the PIN. No key fob needed until you’re ready to drive away.

Looking for the best deal on a new Forester? Fill up this form.

I would recommend this for the family (wo)man who has an active outdoors life based on the fact that the Forester’s off-road capabilities is better than the usual picks for a mid-sized crossover. But as it performs commendably on the tarmac too, it’s really open to anyone looking for a crossover that is well-equipped with safety and driving features. Moreover, there’s not much that it can’t do, except maybe your tax returns and laundry.

The Forester is also a finalist in the upcoming ASEAN Car Of The Year 2016 award in the Mid-size SUV category.