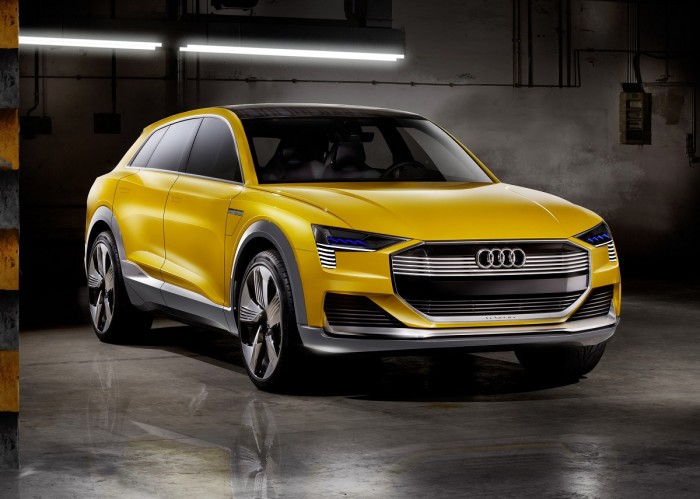 If you had watched Iron Man 3, you might have noticed the intentional focus on the ‘e-tron’ branding as Tony Stark pulls away in his red all-electric Audi R8. That was a supercar for a superhero; said to have 365 hp and a 0-100 km/h time of 4.2 seconds.

With such impressive numbers, and not long after putting the A3 Sportback e-tron on sale, Audi is headed in another direction. While other major automakers are going the electric route, Audi will be looking at hydrogen fuel cell technology as an energy option.

It had already shown the h-tron Quattro concept SUV at the recent Detroit Auto Show, which is very similar to the e-tron version shown at the Frankfurt Motor Show last year. “We chose the (SUV) body style for battery electric since we got very clear feedback from our markets that is what they need to gain volumes (including fleets) and it’s also true that you can ask higher prices for such a car. We will adopt a similar approach for fuel cell cars,” said Stefan Knirsch, Audi’s new development chief. There is a possibility that we will get a hydrogen fuel cell-powered Audi as early as 2018. 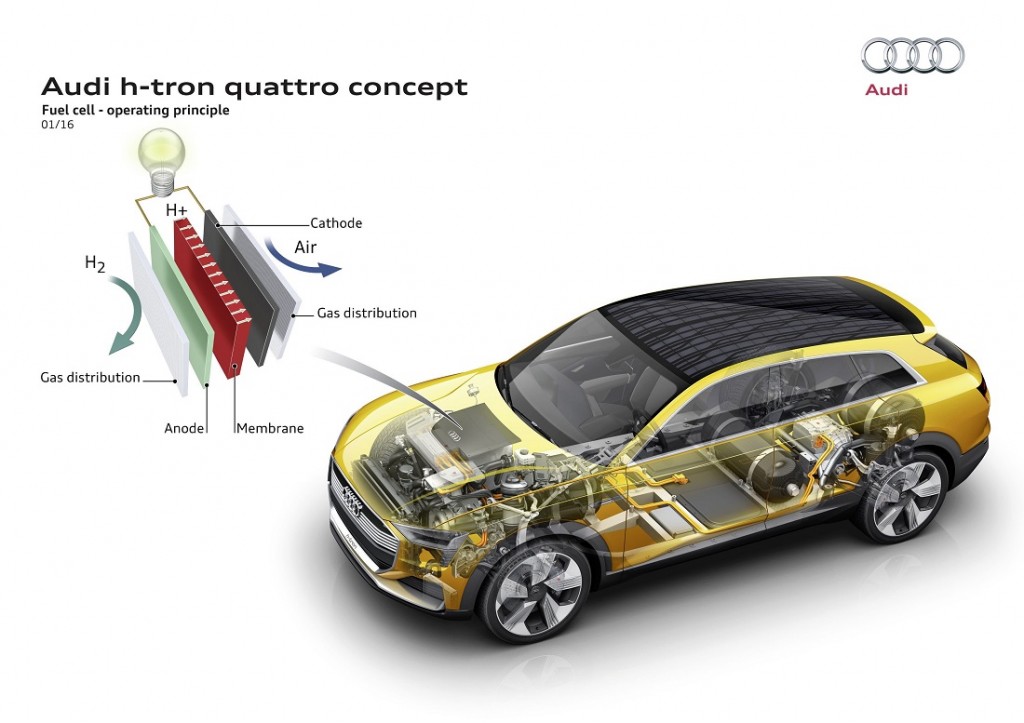 Despite the seemingly constant attention on electric vehicles (EVs), Knirsch feels that hydrogen fuel cell is the way to go. EVs are restricted by battery size, weight and range as well as cooling issues and charging time and infrastructure. Fuel cell vehicles on the other hand can make do with smaller batteries but have longer range thereby making the vehicles lighter and cheaper to make.

According to Audi, the h-tron Quattro concept uses the VW Group’s second generation Modular Longitudinal Platform (MLB Evo) and spends 1 kg of hydrogen per 100 km, giving it a range of up to 600 km on a full tank. The car supposedly produces 282 hp and 550 Nm of torque and goes 0-100 km/h in under seven seconds. The three hydrogen tanks are placed beneath the passenger seats and luggage compartment so there’s no sacrifice of cabin space. An additional rooftop solar panel contributes extra range and power.

Currently, manufacturing costs for hydrogen fuel cells are high but as with all technologies, improvements will bring costs down to a more palatable level. Audi is already looking at reducing precious metals like platinum in the proton exchange membrane fuel cell stacks to make mass production more feasible.

We may not get frequent news about hydrogen fuel cell vehicles but companies like Mercedes-Benz, BMW, Toyota, Honda and Hyundai are doing work on this. Just last week, Honda announced the sale of its Clarity fuel cell vehicle in Japan albeit in limited quantity. Technology is constantly evolving and battery technology has also seen vast improvements over the years so rather than say which is the better tech, it will be more a case of which tech consumers will put their money on.