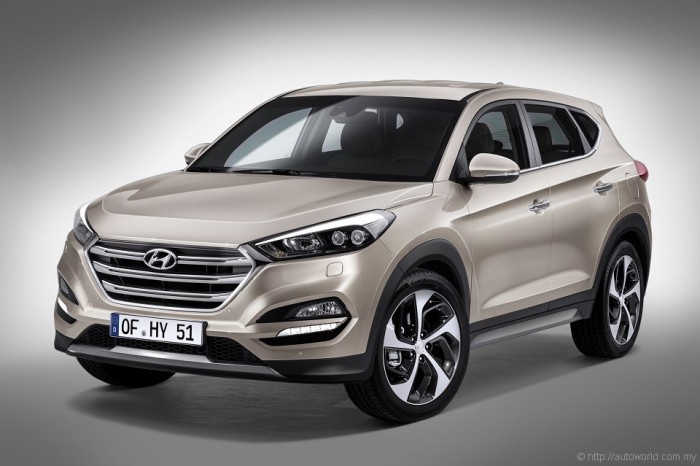 The Hyundai Tucson is due for its full model change soon and European customers will be amongst the first markets to receive the third generation model in the second half of this year after its schedule global debut at the Geneva Motor Show in March.

Reminiscent of a baby Santa Fe from many angles, the all-new Tucson notably sports the signature hexagonal front grille common to all recent Hyundai models. Upper part of the grille visually attaches to the LED headlight clusters, whilst the lower part of the bumper spreads out in a wing-like fashion with LED daytime running lights and front fog lamps perched at both ends.

A wide range of petrol and diesel-powered four-cylinder engines are offered to the European market, all fitted with 6-speed manual transmissions as standard. The diesel range consists of a 113hp 1.7-litre turbo followed by a 2.0-litre mill offered in 134hp and 181hp states of tune. Both the 2.0-litre engines can be optionally specified with a 6-speed automatic transmission.

Petrol power comes in the form of two direct injected 1.6-litre engines with a naturally-aspirated unit delivering 133hp and a turbocharged version offering 176hp. The latter engine further comes with the option of a 7-speed dual clutch transmission. Asian markets are likely to see the use of 2.0- and 2.4-litre naturally-aspirated powertrains instead.

Amenities mooted for the European market include a smart powered tailgate that self-opens when it detects the key fob approaching and Smart Parking Assist for both parallel and perpendicular bays. In markets where applicable, vehicles specified with satellite navigation system are given seven years free subscription to TomTom Live services.

Safety package of the new Tucson includes the fitment of autonomous emergency braking with pedestrian detection, pro-active lane keeping assist, rear traffic crossing alert, and blind spot warning. Pedestrian safety is given a boost with the Active Bonnet System which raises the bonnet in the event of a collision to minimize injury to pedestrians and cyclist.

All units of the Tucson for European consumption will be manufactured at Hyundai’s Czech Republic plant.