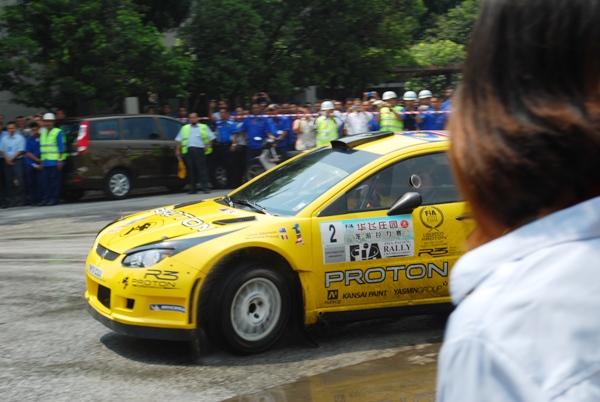 As 2011 draws to its end, Proton’s Motorsports division will have an eventful year to look back to, having made a clean sweep of titles in the Asia Pacific Rally Championship (APRC) and also making good headway in various other campaigns.

Yesterday, the drivers that spearheaded Proton’s success this year took time off their schedules to meet with the company’s staff at the Shah Alam plant. Present were the likes of Faidzil Alang and Syafiq Ali who represented Proton R3 in the recent Sepang 1,000km Endurance race.

Also present was national rally hero Karamjit Singh, who came out of retirement this year with a successful campaign driving the Cusco-tuned Proton Satria Neo 1.6 in the APRC 2WD categories.

Highlight of the day was a live demo by APRC Champion Alister McRae and his co-driver Bill Hayes in the Proton Satria Neo S2000 rally car in the plant’s compound. After the demo, the drivers then made themselves available for autographs and photography. The demonstration will be repeated today for the benefit of staff based at the Tanjung Malim plant.