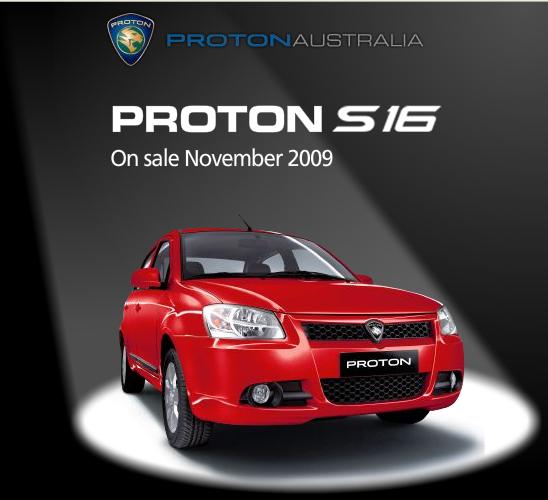 Proton Australia is set to unveil an all-new model to join their line-up this November. To be called the S16, Proton’s latest sedan is set for its Australian debut on 1 Nov 2009. Positioned just below the Persona in its model range, the S16 will be powered by Proton’s famed 16V DOHC Campro IAFM powerplant rated to produce 110hp and 148Nm.

The official press release from Proton Australia stated that the S16 will be available for a ‘drive-away price’ of under AU$13,000, making it the lowest priced four-door sedan in the Aussie market.

According to Billy Falconer, GM of Proton Cars Australia, “We believe the S16 will lead the market on price and economy with performance that will be head and shoulders above other cars in the price range.”

“We have already had a strong response to the announcement that Proton would be launching Australia’s lowest priced four door sedan and between now and the launch date more details including exact pricing will be revealed,” he said.

“All Proton Australia dealers will be taking delivery of a demonstrator S16 during October for test drives and will take orders for the new car ahead of the launch,” he added.

In Proton’s home market in Malaysia, the S16 is known as the Proton Saga.

Further information on the new Proton S16 can be found at a new website setup by Proton at http://www.newsedan.com.au/