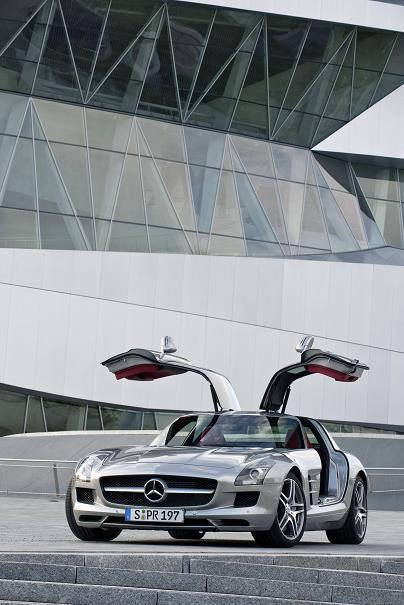 Though slated for a spring 2010 launch, the new ‘Gullwing‘ from Mercedes, the SLS AMG, will make its world premier at the Frankfurt Motor Show this coming week. Being the first car designed and built from the ground-up by Mercedes’ AMG division, the SLS AMG is touted by Stuttgart as a sports car without compromise. All the ingredients to ensure superior driving dynamics are present: all-aluminium construction, low centre of gravity, balanced weight distribution and all-round double wishbones.

“Mercedes-Benz is presenting an exhilarating super sports car in the guise of the new SLS AMG, which is bound to set the pulses of all car enthusiasts racing that extra bit faster. The brands Mercedes-Benz and AMG have joined forces to create the SLS AMG ? which is set to become one of the most alluring sports cars of all time”, says Dr. Dieter Zetsche, Chairman of the Board of Management of Daimler AG and Head of Mercedes-Benz Cars.

Its styling pays tribute to the original Mercedes’ original ‘Gullwing’, the 300 SL. The gullwing doors are the most obvious references, followed by the fender gills and the gaping bumper-mounted front grille with a single horizontal slat bisected by a huge three-pointed star in the middle. Viewed from the front, with both gullwings opened, the SLS nicely rekindles memories of its spiritual ancestor.

“The styling of the new Mercedes-Benz SLS AMG is not only very special because of the exclusive gullwing doors. Our aspiration is to utilise this interpretation to create the classic of tomorrow and roll out the most alluring sports car of the 21st century. Our aim is also to create a new design icon, which shapes the incomparable legend of our brand, alongside Mercedes models like the CLS or the SL. At the same time, the new SLS paves the way for the design philosophy of forthcoming Mercedes-Benz sports cars”, says Gorden Wagener, Head of Design at Mercedes-Benz Cars.

In the name of achieving the ideal weight balance, AMG has mounted the 6.2-litre M159 V8 engine behind the SLS’ forward axle. To allow the engine to sit as low as possible within the all-aluminium spaceframe, Mercedes took the trouble to engineer a dry-sump lubrication system, and also mounted the steering rack ahead of the engine. This arrangement of the running gear shows in its long and low-slung bonnet, which measures almost two metres in length. 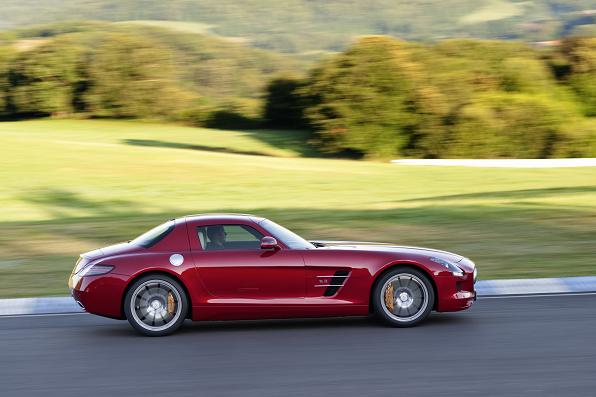 Mercedes claims that the SLS AMG’s cockpit design was heavily inspired by, no, not the 300 SL, but by aircraft construction. Unlike in the grandiose cabins of the E-class or S-class, the interior of the SLS has much simpler design lines. The dash and centre console join to form a simple T-shape, with four circular galvanized vents providing ventilation. Sitting between the two central vents is the 7″ LCD for the COMAND APS system. 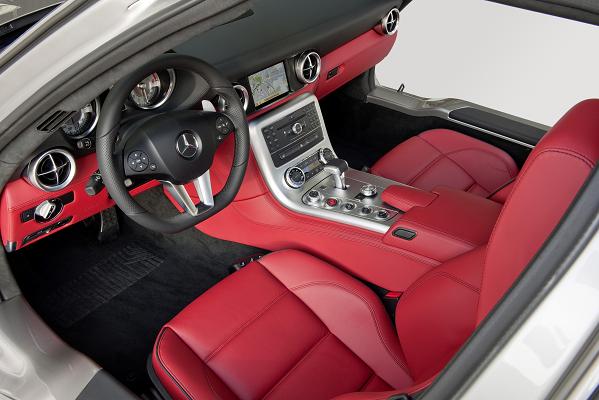 Interior is simple, but hardly cheap.

Feeding the info of speed and revs to the driver is a two binnacle instrument panel with white backlit dials and LED upshift indicators. Further aviation references are found in the centre console where the shape of the E-SELECT lever, controlling Mercedes’ first ever twin-clutch gearbox, the 7-speed AMG SPEEDSHIFT DCT, distinctly resembles a jetplane’s thrust control. Next to it are the control switches of the AMG DRIVE UNIT, deliberately angled towards the driver. 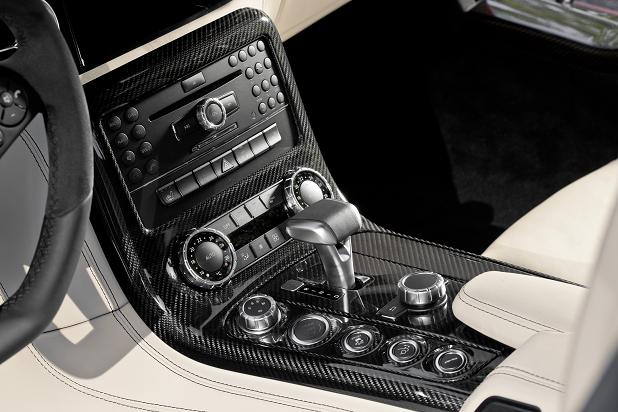 Simple as it may be, but the SLS’ interior certainly ain’t cheap. It incorporates fine materials such as Nappa leather and solid metal finishings, with carbon fibre trim optionally available. The backrests of the two sports seats are made of magnesium to give the best combination of weight and strength. Their side bolsters are filled with harder foam to give optimal lateral support, while the inner cushions are softer to give high levels of cruising comfort. Standard fitment for the seats include three-stage heating and child seat recognition.

A great effort has been placed on the chassis engineering of the SLS, and that shows in the tremendous amount of focus on this subject matter in the marketing talk. The SLS is not only designed to be light weight, it is also designed to have its weight concentrated as low and as well balanced between the two axles as possible. The extensive usage of aluminium allows the SLS tip the scales at a portly 1,620kg, distributed in a 47:53 ratio front/back.

To further help in the cause of weight distribution, the engine is mounted behind the front axle, with the twin-clutch transmission mounted astern over the rear axle. The use of dry sump lubrication allows the engine to sit as close as possible to the ground, lowering the car’s centre of gravity. Meanwhile, unsprung mass is further reduced with the use of aluminium suspension components, ceramic disc brakes, and light-weight alloys. 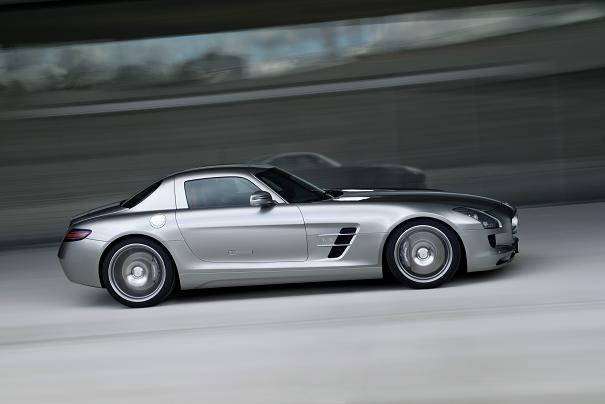 You may not buy into Merc’s FC claims of 13.2 litres/100km, but emissions of the SLS are compliant to EU 5, LEV, and ULEV standards. Helping out on that front is an intelligent generator management system, which recuperates kinetic energy during braking to recharge the battery. The generator disconnects itself from the engine during acceleration. 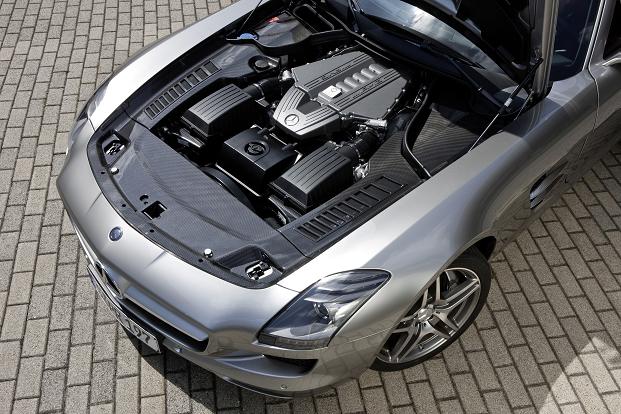 Existing M156 powerplant not good enough for the SLS. Mercedes re-engineered it to become the M159.

Sitting over the rear axle is the first ever twin clutch transmission fitted into a Mercedes. The 7-speed unit, dubbed the AMG SPEEDSHIFT DCT, is connected to the engine up front via a rigid torque tube housing a carbon-fibre driveshaft. Depending on driving modes – C (Controlled Efficiency), S (Sport), S+ (Sport Plus), or M (Manual) – gear changes take place as quickly as 0.1 seconds. The aforementioned driving modes are selected using the rotary control of the AMG DRIVE UNIT.

With curtains set to finally come down on the venerable SLR after the Stirling Moss concludes production in December, the SLS will have a huge void in the Mercedes model range to fill. They may be very different animals, but in their time, both have the task of being Merc’s top dog. Even if it’s the bread-and-butter C-class and E-class models that bring in the sales, and ultimately the fundings for such projects, the SLS still needs to be a very special car. From what we see in the pictures and the specs sheet the SLS is set to be a legend in the making.

As of now, Mercedes are still set on their schedule to start selling on spring 2010. Price? EUR 177k.