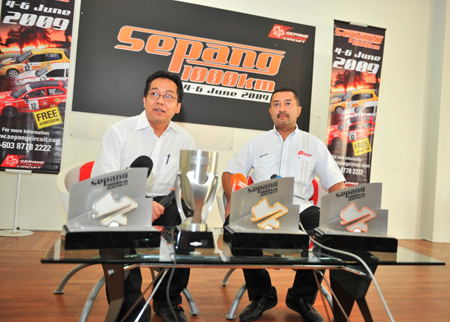 Already home to some of the world’s most prestigious racing events, the Sepang 1000km is set to be another pride of Sepang International Circuit.

“It is truly an-all Malaysian event designed by and for Malaysians in particular,” said SIC Chairman Datuk Mokhzani Tun Mahathir at the event’s launch by the Youth and Sports Deputy Minister Datuk Razali Ibrahim at the circuit yesterday.

Open to production cars below 1900cc (Class B and C), the introduction of the 1000-km race has now split the Merdeka Millennium Endurance race and, perhaps, effectively eliminated the painful experience of non qualifiers at the 12-hour race.

A maximum of 77 cars would be allowed to start the race with the quota set at 38 cars for Class 1 for cars between 1650cc to 1900cc and another 39 cars for Class 2 for cars with engine capacity below 1600cc.

Qualifying for the race will start on June 5 while the process of registration, scrutineering and free practice would be done the day before.

With a minimum of two drivers and a maximum of four drivers to a car, the first team that completes 182 laps (approximately 1008km) of the 5.543km track will be announced the winner on race day, June 6.

“It’s a natural progression for a race like MME to become more competitive with more big budget teams and faster cars entering as the years go on, with this some of the smaller players start to be left behind,” said Mokhzani.

“After studying the feedback from the smaller teams that took part in MME, it was decided that they needed a more level playing field which resulted in the creation of the Sepang 1000km.

Nevertheless for those frequent MME qualifiers, the race can also works as a warm up to the MME in August.”

Mokhzani also believes that the Sepang 1000km is a good grass root level race which caters to fresh and upcoming racing teams.

“With categories B and C in mind, SIC wanted to produce a strong bunch of drivers and team in this category,” Mokhzani said.

All teams will be using the  Achilles 123 model as the official tyre for the race as a compulsory requirement.

For you motorsports fan out there, come and be part of this historical event. Entrance for public is free.

The race schedule as follows:-