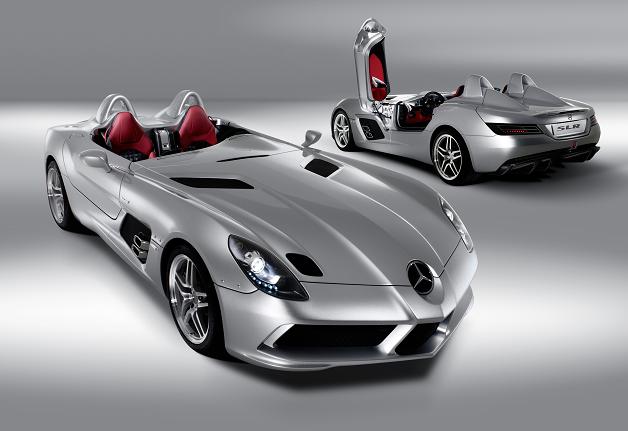 The curtains are set to come down on the Mercedes-Benz SLR McLaren. After almost six years of service, this product of a collaboration between Merc and McLaren will finally be pensioned off, though not before receiving a glorious swansong in the form of the limited edition SLR Stirling Moss. Retaining the original SLR underpinnings, but outrageously styled in reminiscence of the old 1955 300 SLR, only 75 units of this remarkable car will be built.

Its relation with the SLR beyond wearing the same model badge is not obvious at first sight. Mercedes has lopped off the windscreen and roof, and completely redesigned the body shape of the car, leaving only clues of the original model – looking more like a distant cousin than being a mechanically identical brother. Propulsion is provided by the same 5.5-litre supercharged V8 tuned to a massive 650hp. This massive lump can hurtle the SLR Stirling Moss from standstill to 100kph in 3.5 seconds before maxing out at a blinding 350kph.

The new additions to attached to its name plate are placed in honour of British racing legend Sir Stirling Craufurd Moss, who famously drove the aforementioned 300 SLR to victory at the 1955 Mille Miglia endurance race. Moss drove his car, famously numbered 722 after his starting time of 7:22am, to victory in a still-standing record of time 10:07:48. Mercedes had already famously honoured this car with the SLR 722 edition in 2007, bearing the number 722 in similar fonts as it was emblazoned on Moss’ car.

Phasing out the SLR

The SLR McLaren made its world premier in Autumn 2003, as a showcase of the collective technological knowhow obtained throughout Merc and the big Mc’s long-running Formula One partnership. Its nameplate was chosen in honour of (yes, you guessed it) the 1955 Mercedes-Benz 300 SLR.  It has since spawn a roadster variant, the mad-as-maniac 722 edition and the even madder 722 GT.

In the context of the Mercedes family, the SLR name carries huge historical significance. The 300 SLR, even back in 1955, was producing 310hp out of a 2,982cc eight-cylinder engine, and was capable of a top speed of 310kph – truly impressive even by today’s standards. This SLR was also a product of F1 technological knowhow, being based on the 1954/5 Mercedes W196 F1 racer.

Its racing career was glorious, but short, being prematurely ended by a fatal accident in the 1955 Le Mans 24 hour endurance race. In the incident, one particular SLR driver, driven by Pierre Levegh, rear-ended an Austin Healy and was hurled towards the crowd, injuring more than a hundred people, and killing over 80 – including Levegh himself. This incident led to Merc’s complete and official withdrawal from motorsports until the 1980s.

Despite the tragic end to its short racing career, the SLR remains a truly remarkable machine, having won the Targa Florio, Tourist Trophy, Eifelrennen and the Swedish Grand Prix all in the span of its one year in service. With these glorious memories in mind, Mercedes finally resurrected this nameplate in the 21st century with the SLR McLaren – another F1-inspired technological tour-de-force.

The roadster version was launched in September 2007, shortly before the coupe version ceased production. In April 2008, Mercedes announced that the SLR will be retired in May 2009. Assembly of the 75 units planned the Stirling Moss will take place from June till December 2009, which, in Mercedes’ own words, marks “for the foreseeable future, at least, the final curtain for the SLR.” 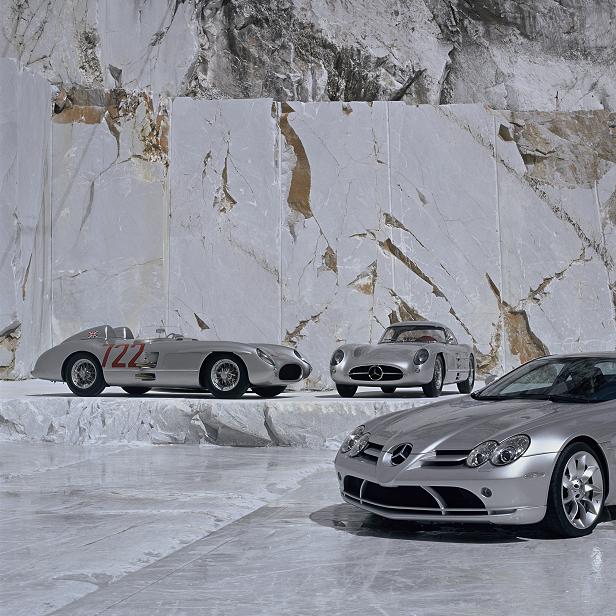 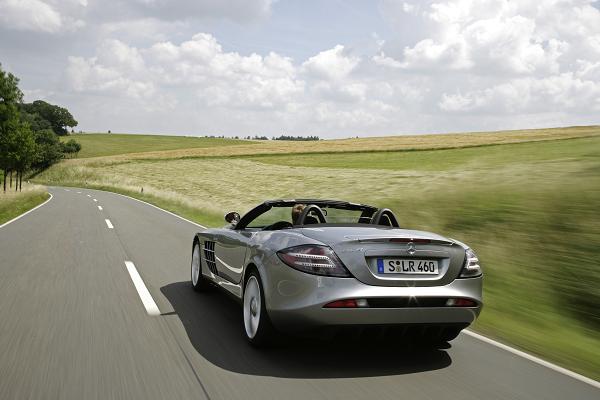 There’s very little of the SLR McLaren’s styling left in the Stirling Moss. In fact, it looked as though the design team ran riot, reworking and reinterpreting every line there was in the SLR McLaren to create this mean-looking machine. The scissor doors stay, as does the huge three-pointed star on the shutline between the bonnet and bumper, but little else.

The F1-inspired styling of the SLR’s nose has been heavily reworked, retaining only its pointed shape at the nose. Same goes to the front fenders with the massive side gills and exhausts. The pair of exhausts on each side has been repositioned from under the fender to inside the side gills, stacked one on top of the other, just like in the ’55 300 SLR, from which many of the Stirling Moss’ styling cues are derived from. 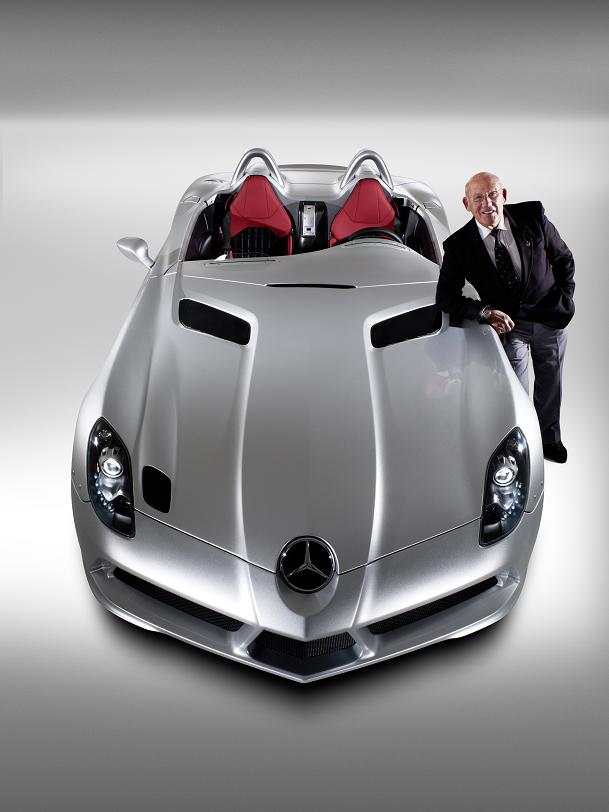 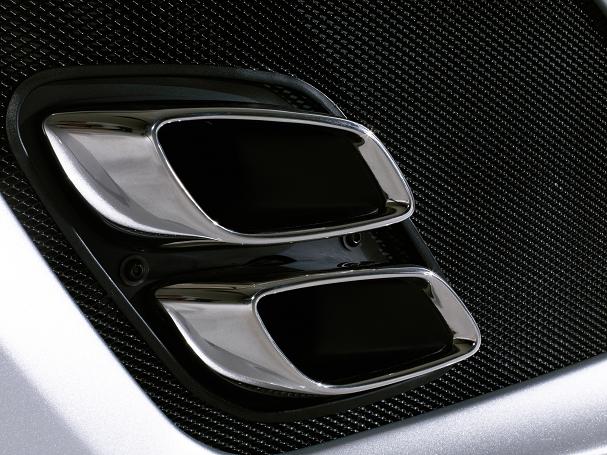 Exhausts now stack one on top of another and integrated into side gills, one of many tips of the hat to old 300 SLR

At a glance, this car looks too extreme to go even beyond a concept stage in a company with such conservative sensibilities as Mercedes, but times have changed. The Stuttgart firm has been getting bolder and bolder in its designs to wrest some share of the enthusiasts’ market from their arch enemies in Munich. Would you expect to see a Mercedes without even a windscreen?

Here, all that protects the two occupants from the stream of air rushing from the front as the car races down the autobahn at breckneck speeds are nothing but a pair of wind deflectors measuring a couple of centimetres high. It’s what Mercedes calls a ‘puristic experience’, and the car also does without a roof and side windows.

The most significant styling element of the Stirling Moss, and also its most obvious reference to the old 300, is the pair of air scoops behind the driver and passenger. In the event of an unfortunate accident with the car turning turtle, the air scoops also serve as a roll bar to improve the occupants’ chances of survival. 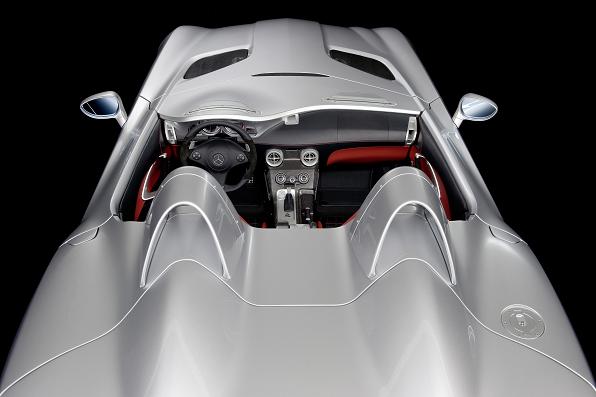 Pair of air scoops the most visible styling ‘landmark’ of the Stirling Moss.

The rear end of the car is practically unrecognisable from the SLR McLaren, with only the three point star remaining and nothing else. The taillights have been completely reshaped from the SLR McLaren’s inverted triangular design to a pair of fiercer-looking trapezoidal units. The subtle integrated rear diffuser has been reshaped to be more edgy and obvious in appearance, practically shouting its presence. Even if just reviewed on styling terms alone, this is a Mercedes like no other. 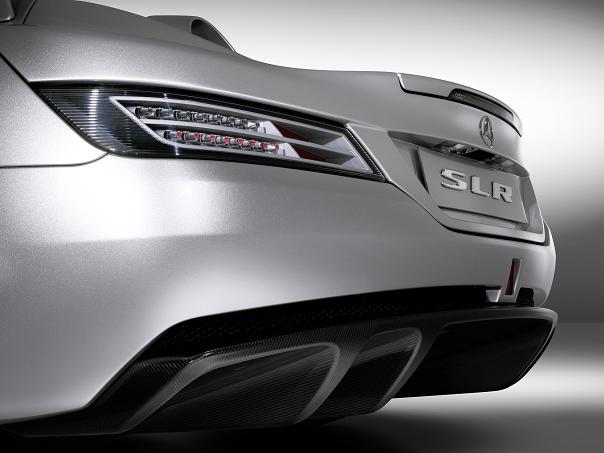 The Stirling Moss, therefore, probably moves the SLR closer to what McLaren had envisioned when they first embarked on this joint venture. Climbing over the high opening aperture of the doors lands you inside one of the most barebones cockpit made that can be found in a Mercedes. It is, however, only barebones in equipment, not material; you get a mixture of leather, carbon fibre and aluminium trim around you. 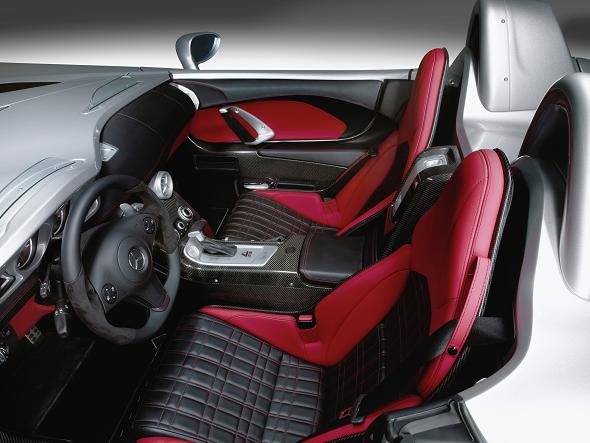 As mentioned earlier, driver and passenger are completely uninsulated from the surroundings, with only a pair of tiny wind deflectors measuring centimetres high protecting their faces from the onrushing streams of wind. There is no windscreen, no roof, and no side windows – there’s no driving this car under rainy conditions. When parked, however, you can enclose the cabin with a pair of tonneau covers stowed in the boot.

On the dash, there is no LCD screen, no buttons galore, and none of the usual Mercedes luxuries, not even a radio. You do get a pair of airbags, dual zone climate control, and that’s about it. Mercedes didn’t even bother to hide the screws holding the carbon fibre centre console in place. It houses a pair of central air-con blowers, the basic climate control system, the handbrake (carried over from the SLR McLaren, but still unusual in a Merc), the engine’s start-stop button and a T-shaped gear lever surrounded by aluminium finishing. 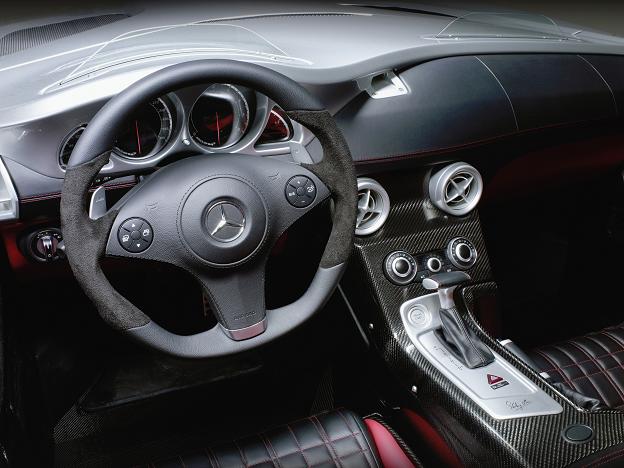 Cabin has air-con, err… that’s it.

Indeed, just like the exterior, the interior is also barely recognisable from that of the SLR McLaren – even the steering wheel has been changed. The instrument panel has also been reworked, with the one-piece fascia replaced with a four-binnacle design, each separately housing the speedo, tacho, temp and fuel gauge respectively. As a final touch, to remind the occupants of the car’s special heritage, Mr Moss’ very own signature is engraved into the centre console’s aluminium finishing. 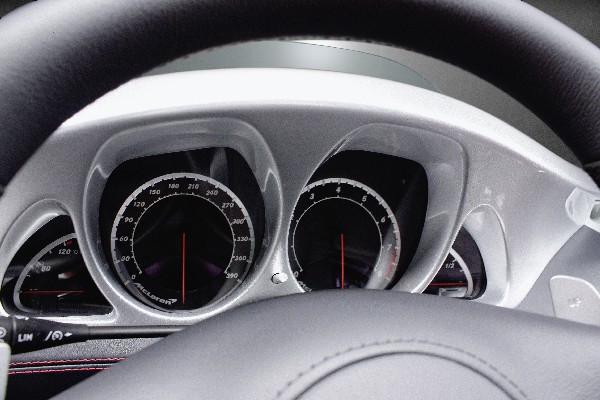 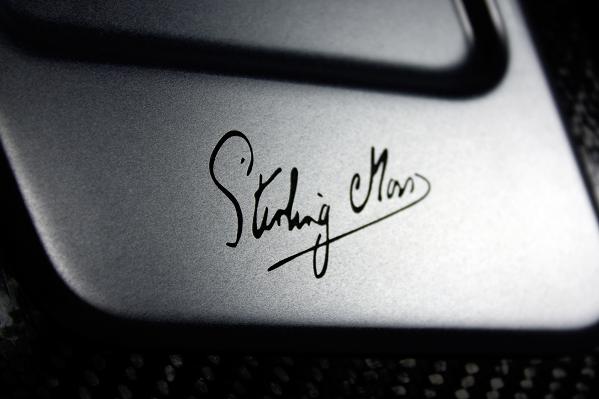 As if as any introduction is needed.

However, if you’re planning to take your buddy on a 350kph joyride, forget it. Assuming you get a stretch of road long enough for you to get to that speed, it can only be achieved with the passenger side of the cabin enclosed by the tonneau cover and the passenger wind deflector removed, such is the significance of aerodynamics in this car. 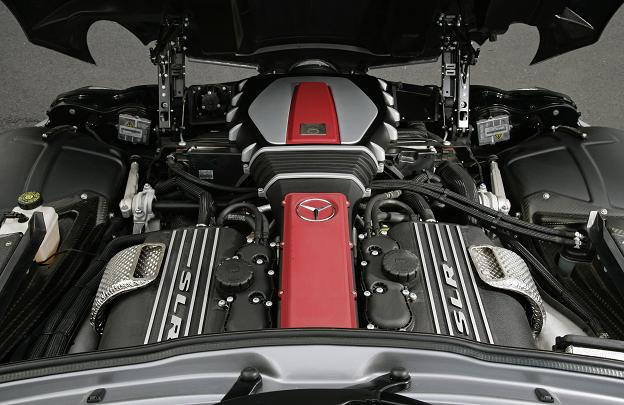 Indeed, for the Stirling Moss, Mercedes picked up from the good work done on the aerodynamics of SLR McLaren, as they continued to refine it further. The closed underbody ensures smooth flow of air through the under-carriage. The rear diffuser has been enlarged and more pronounced, both for cosmetic and aerodynamic effect, resulting in increased down force at the rear axle.

The functioning airbrake, incorporated into the rear lip, raises automatically when the driver applies the brakes at speeds of 120kph and above. In addition, the driver also has the option of manually raising the airbrake, to further improve high speed stability. The bodywork also incorporate air ducts for active cooling of the brake discs. At high speeds, electrically operated flaps would partially close the ducts, until the driver applies the brakes, when the flaps would open again.

Only 75 units of the SLR Stirling Moss will be built, with assembly set to commence immediately after the SLR Roadster ceases production this May. The privelege of owning one would set the buyer back by a massive €750,000 (that’s RM3.59m). Don’t bother setting the money aside though, they are all sold out to existing customers of the SLR, whom Mercedes has involved throughout the development process.

The Stirling Moss will mark the end of the current generation Mercedes SLR, and what a farewell it is. It is one of the most outrageously designed Mercs of all time. Calling it a bold design would be a massive understatement. The fact that such a car made it beyond the conceptual stage from one of the most conservative manufacturers is utterly amazing. Mercedes deserves praise for making this product, even if it is just in small numbers. 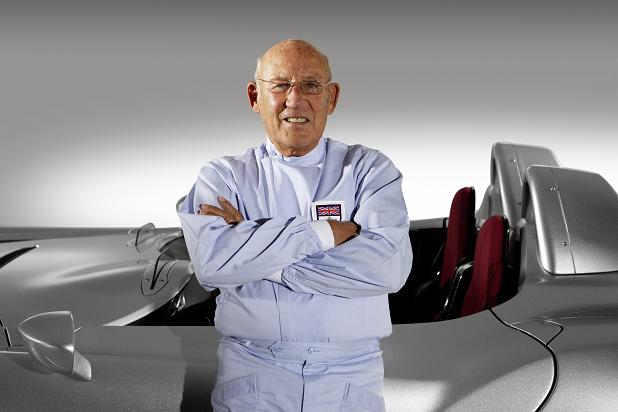