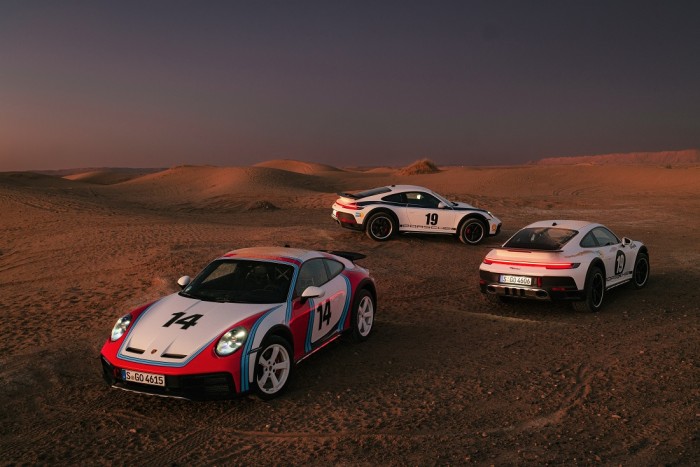 Porsche has released a collection of exclusive wraps for the 911 Dakar that pay tribute to its rally days. The rally heritage of the Porsche 911 began before the first victory in the Paris-Dakar Rally in 1984. Early forays in the East African Safari Rally in the 1970s still remain a strong memory.

While the styling of the optional Rallye Design Package for the 911 Dakar draws heavily on the winning car of 1984, Porsche offers 3 exclusive wraps for the 911 Dakar that reprise the look of the 1971, 1974, and 1978 entrants in the East African Safari Rally.

Porsche undertook this challenge for the first time with a works team in 1971. This event took participants more than 5,000 km through savanna, desert scrubland and the highlands of Kenya, and is regarded as one of the toughest rallies of all. 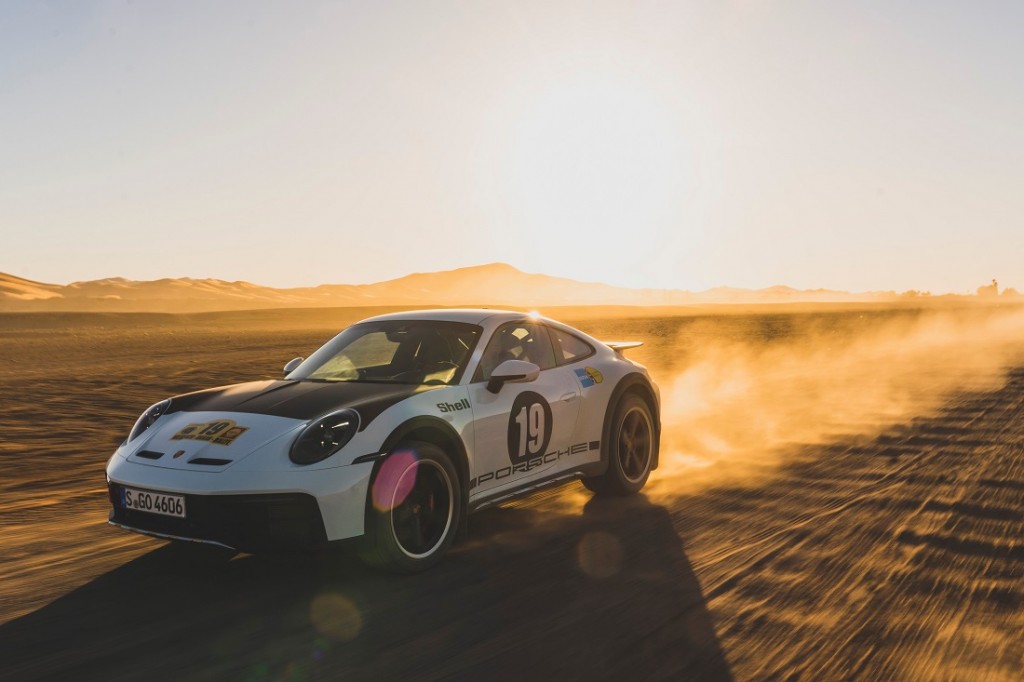 Outwardly, the modified 911 S models were only identifiable by the simple black decals on the bonnet, the front wings and the doors. The Rallye 1971 decal set for the 911 Dakar revisits this design and adds the competition number 19, which belonged to the most successful 911 in this rally i.e. a car that came 5th in 1971, driven by Polish drivers Sobiesław Zasada and Marian Bień.

The East African Safari Rally featured incredibly long stages. In 1974, the race was divided into 3 sections of 1,450 to 2,019 kilometres, which the teams had to complete in just 5 days. Of the 99 cars that entered, only 16 made it to the finish line. 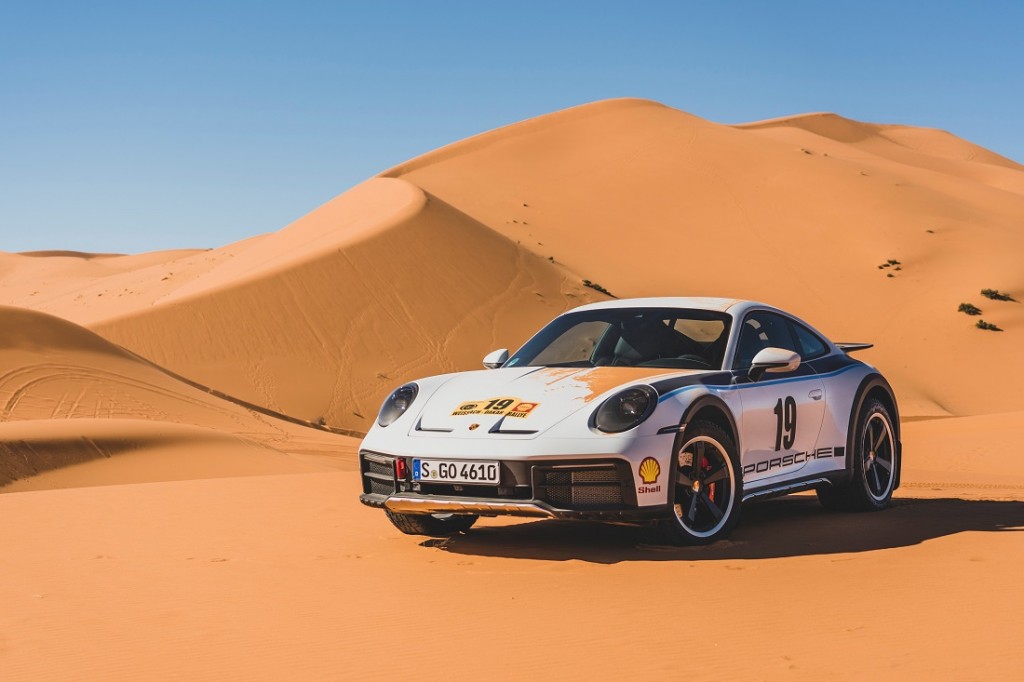 Swedish rally champion Björn Waldegård, who had already won the Rallye Monte Carlo twice in a Porsche, held the lead for a long while alongside co-driver Hans Thorszelius in the 911 Carrera 2.7 RS, and started the 3rd section with a 36-minute gap on 2nd place. However, a damaged wishbone cost him 72 minutes, and in the end Waldegård held on to finish 2nd. Characteristic of the decals of the main sponsor were the blue stripes that traced the shoulder lines of the otherwise white car. The current wrap takes up this theme, albeit with narrower stripes and augmented by the Porsche logo on the lower edges of the doors.

Björn Waldegård wasn’t done yet. With one of 2 911 SC Group 4 cars custom built for the purpose, the Swede gave it another go in Kenya and quickly showed the competition that he was set on victory. In the end, however, the East African Safari Rally would again prove treacherous. There was too much damage sustained by Waldegård’s Porsche to the wishbone, shock absorber, drive shaft and in some cases, he was far from helping hands. 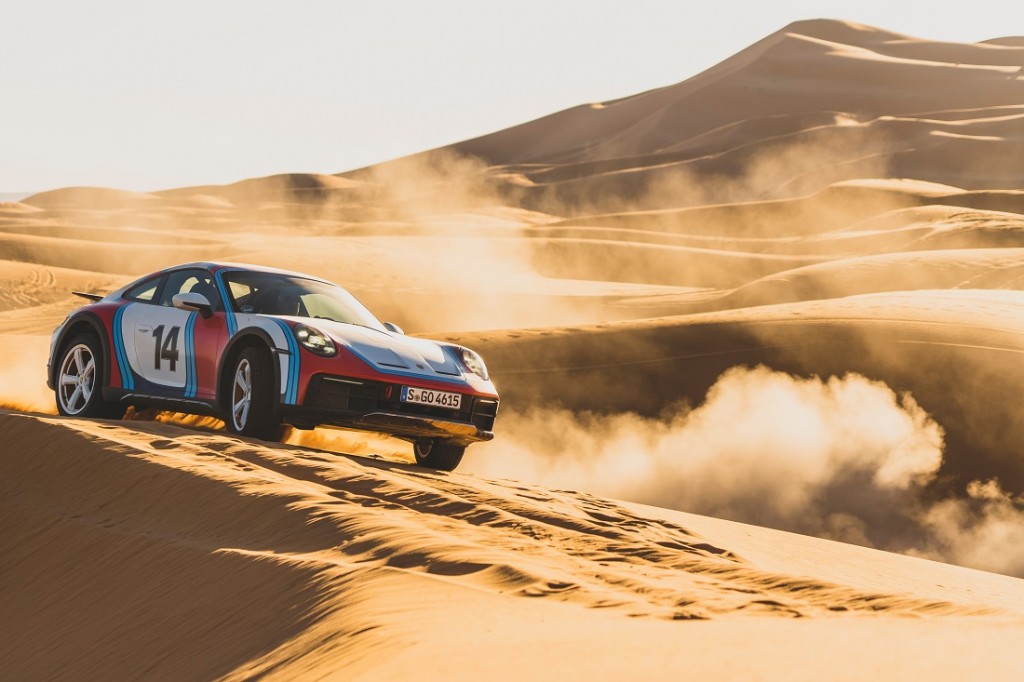 The speedy Swede had to be content with 4th place, while the South African duo of Vic Preston Jr. and John Lyall took 2nd. The sponsor’s decals consisted of wave-shaped surfaces in orange and light and dark grey, familiar around the world thanks to the activities of the Martini Racing Team founded in 1958. Once again, Porsche designers have respectfully reinterpreted the historic decals here. The competition number 14 on the doors was that of 2nd-placed Vic Preston Jr.