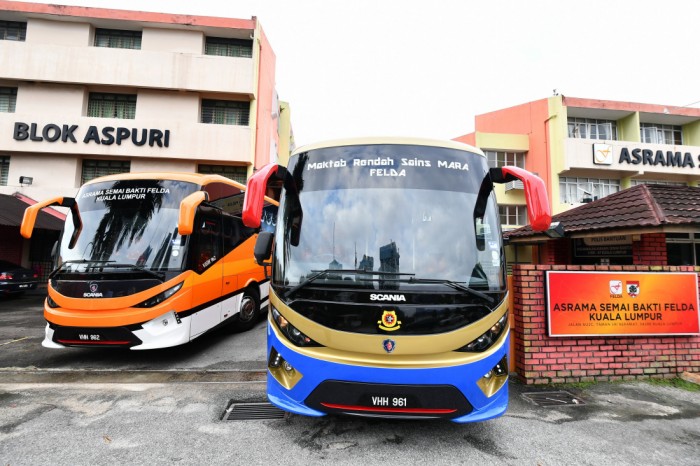 These Scania coaches are FAME-prepared and ready to run on B20 and up to B100 biodiesel. It is considered environmental friendlier and helps to lower global emissions by reducing CO2 to limit the effects of climate change. FAME stands for Fatty Acid Methyl Esters, the technical term for the biodiesel produced in Malaysia. 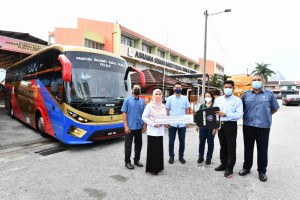 The Scania coaches will be used to ferry FELDA settlers’ children between the asrama (hostel) and schools in the urban areas. Established in 1956, FELDA was primarily for developing the agricultural economy especially for rubber and palm oil. And its CSR programme began primarily for the benefit of the agricultural settlers and FELDA employees whose children are given opportunity to study in urban schools. 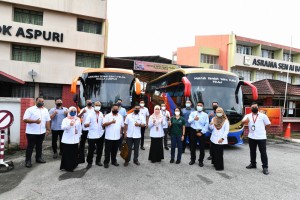 The Asrama Semai Bakti FELDA Kuala Lumpur (ASBFKL) was set up in 1975 as a major social responsibility move to benefit the FELDA families. Since then, 2 more hostels have been set up i.e. in Kuantan (1978) and in Johor Bahru (1983).

Similar benefits were extended to other institutions such as the Maktab Rendah Sains MARA (MRSM) that also take in FELDA’s children. As such, FELDA had to obtain coaches to safely transport FELDA children between hostel and school. 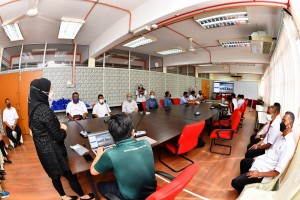 The Inclusive Maintenance contract for 5 years allows FELDA to take advantage of Scania’s proactive maintenance procedures and avoid time-consuming and costly problems. This is to ensure that uptime is maximised while operating costs are reduced. This contract also provides FELDA with predictable costs so that it can focus on transporting the students with minimal worries. By individually optimising the different modules in its service plan, Scania ensures via the Inclusive Maintenance contract that downtime is planned and reduced to a minimum.

Furthermore, upgrading the complimentary Scania FMS Monitoring feature to the Control 10 package will also ensure further reduction in carbon footprint through even more fuel savings via the improvement of the drivers’ skills in handling these two Scania coaches.

Both the Scania coaches are also pre-set with the Economy mode as default. This is to ensure that FELDA enjoys the best fuel economy and CO2 emission reductions, in line with Science Based Targets initiatives (SBTi). Scania customers with coaches purchased before 2021 can also set Economy Mode as default at any authorised Scania workshop nationwide.

“As the leading provider in Sustainable Transport Solutions, Scania is pleased that it could be part of FELDA’s corporate social responsibility movement via these 2 Scania coaches. We hope that together we can do more by providing Scania vehicles that are more environmentally friendly and reduce FELDA’s carbon footprint even more, creating a world of mobility that is better for business, society and the environment, for our future generation.” said  El Tarifi, Managing Director, Scania Southeast Asia.