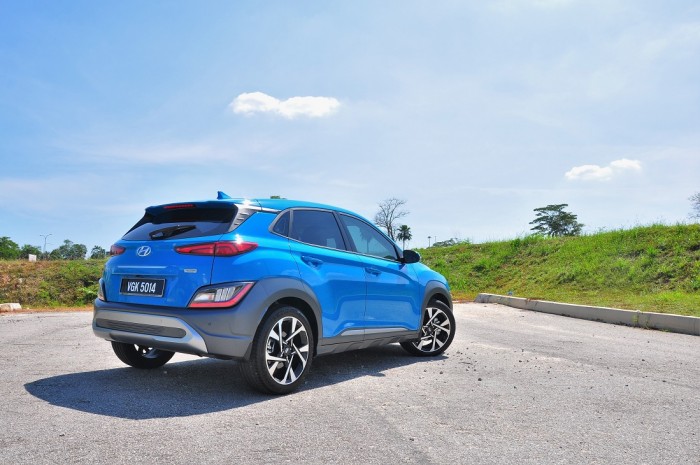 Barely a year after introducing the Hyundai Kona to Malaysia, Hyundai-Sime Darby Motors brought in the Kona facelift. But while some will complain that this is too soon, it is likely to be HSDM’s strategy to be more up-to-date with the offerings from Hyundai Motor Company. The Kona is after all, fully imported from South Korea so there is little cost amortisation required compared to a locally assembled model. It would also silence the detractors who may accuse Hyundai of dumping old products here.

And to further carry this point, the latest Kona is more than just cosmetic updates; there is also a new drivetrain. Still looking very similar to its predecessor, the differences in the facelift version may escape those who didn’t pay attention. But any time a brand calls something a ‘facelift’, one can expect the face (and the opposite end) to carry revisions.

Notably, the front grille and bumper have been reprofiled, with the Hyundai logo relocated from the grille to the bonnet area. The daytime running lights and headlight cluster have also changed, doing away with the black cladding that used to surround the headlights, and giving it a more urban vibe. The fog lamps are also now the LED type. Similarly, the rear LED light cluster and bumper also get a revision. Lengthwise, this compact SUV has gained 40 mm but this is mostly due to the cosmetic updates as all else remains similar.

The same update treatment applies to the inside. Most notable is the replacement of the handbrake lever with an electric parking brake, which frees up some space for storage. The single zone climate control remains but the area around the gear lever has been raised slightly. The red interior trim has made way for a more subdued (or ‘adult’) black one, while the horizontal slats of the side air vents have been replaced with a spoke design. Additionally, one of the 12V sockets in the front is now a more relevant USB port and the Qi wireless charging pad has gone missing. The absence of the latter is not a deal-breaker as only selected smartphone models feature wireless charging.

And on the subject of ‘wireless’, one of the key features that I like is the wireless Apple CarPlay and Android Auto connectivity. Connecting the phone to it was fuss-free and allows you hands-free control of essential apps. Using Google Assistant to set navigation or to voice-type and send a message was easy peasy. The infotainment screen is marginally bigger now (8 inches), and has the physical buttons relocated to the bottom for easier reach. In a world full of plain touchscreens, physical buttons are still a welcomed old-fashioned feature especially when driving. However, the old school meter cluster has been replaced with a crisp 10.25″ LCD display.

A less obvious update to this B-segment SUV is the new Smartstream drivetrain. This is Hyundai’s latest powertrain technology learned from its foray into motorsports. The company claims that its Smartstream range offers more dynamic performance, but with improved fuel efficiency and reduced emissions. On paper, the 2.0L Smartstream G Atkinson cycle engine has the same 149 PS @ 6,200 rpm, and 180 Nm of torque (at a slightly higher 4,500 rpm) as its previous Nu MPI engine. The new engine is paired with a Smartstream IVT (intelligent variable transmission) with 8 virtual speeds (replacing the conventional 6-speed auto). The IVT is Hyundai’s take on a continuously variable transmission that uses a chain instead of a conventional belt and is said to improve responsiveness, reliability and efficiency.

I did not consciously test out the fuel efficiency, but I was hovering around 7 l/100km with mostly city driving, before ruining it at a photoshoot in the afternoon. I also did not do a 0 – 100 km/h run but the official figure has it at 9.7 seconds. But in the everyday driving department, the Kona didn’t disappoint. The engine and transmission work well together to get you off the line at a good pace. However, overtaking manoeuvres at highway speeds may need a bit more aggression on the throttle. This may be due to it being biased for fuel economy and thus trying to keep revs as low as it can.

As a daily driver, the Kona Active is quite capable in the handling section. Granted that this is more of a lifestyle crossover / SUV than a performance hatch, it can tackle corners with some enthusiasm, or at least as much as the rear torsion beam set-up can take. Noise intrusion into the cabin is also quite well sorted, unless you’re stomping on the throttle. But where the Kona wins is in the urban setting. Even though it is marketed as a B-segment SUV, on city streets, it feels more like a hatchback and that makes it easy to manoeuvre the narrow roads and tight parking spots.

The nearly hatch-like demeanour shows in the boot capacity of 374 litres, for better or worse. There are those who have no use for anything more spacious, so for them, this works well. There is a false boot floor with some storage space where a tyre repair kit rests (there is no spare tyre) should you want to stow some things away. Also, the rear seats split 60:40 and fold flat in case you need to carry bulky items in lieu of humans.

And for the humans in the rear, the seats have a comfortable lean angle and are fairly supportive. In reality, the Kona ferries 4 regular sized adults comfortably, and 5 could be a stretch for long journeys. The downside to filling the rear with heads is the view out the back is quite limited. On the other hand, the cockpit is a pleasant experience. The seat is comfortable and supportive, and the steering wheel has enough girth to feel substantial.

For driving, Hyundai has positioned a drive mode toggle by the gear lever that also adds traction options such as sand, mud and snow. This is only a front-wheel-drive vehicle but these modes work by manipulating torque delivery according to the set modes and is still of some use. The Kona Active now also adds a more comprehensive suite of the Hyundai SmartSense active safety features. You get Forward Collision Warning & Assist (with pedestrian and vehicle detection), Driver Attention Warning, Leading Vehicle Departure Alert (some drivers need this more), Lane Keeping Assist, Lane Following Assist, Blind Spot Collision Avoidance Assist, Safe Exit Alert, Rear Occupant Alert, Rear Cross Traffic Collision Avoidance Assist, Forward & Rear Parking Distance Warning, and Rear View Monitor. There is cruise control, but it is the passive version. Essentially, any feature with ‘assist’ in its name will autonomously manipulate the brakes and/or steering. Also, some of these features can be turned off although I tend to leave them alone to work as intended. Some of these features have saved me from close calls and I also find it more relaxing on longer drives.

So while this Kona Active doesn’t have the punchy feel of its turbocharged sibling, it is by no means weak. For the driver who doesn’t care to make lightning dashes from traffic light to traffic light, the Kona Active is more than adequate. And for someone looking at an urban lifestyle vehicle that is also easy to manouevre, this certainly is appealing.