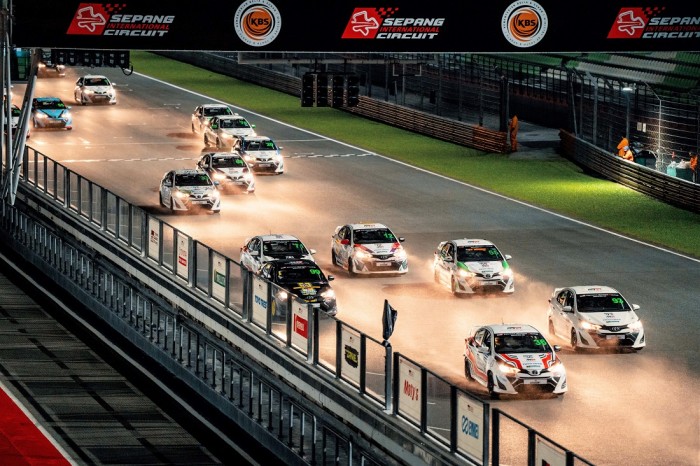 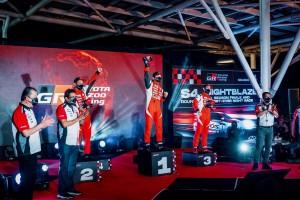 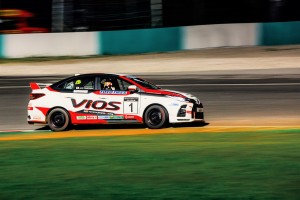 This season has some of the most intense racing thus far, with all 4 categories having no less than 3 racers in close battle for the overall title. “We could not have asked for a more exciting finish to the season,” said TOYOTA GAZOO Racing Malaysia Chief Motorsports Officer Akio Takeyama, who has been racing in the Promotional Class since the series began.

“Faced with an incredibly challenging season as a result of the global pandemic, we are thankful that we were able to conclude the championship. The introduction of a night race also made the Vios Challenge even more unpredictable and quite a spectacle enjoyed by both drivers and spectators. I would like to thank all the drivers, teams, sponsors, business associates and all personnel involved in the series for their continue support. We will be back next season, and hopefully in an even bigger way!” he commented.

This elite category saw an incredibly fierce battle at the front between 3 drivers, all of whom were in contention for the overall championship. In the end, it was 23 Motors’ Mitchell Cheah who exerted his dominance to win the 20-lap race ahead of Prima Pearl Auto’s Tengku Djan Ley and Telagamas Toyota’s Freddie Ang in 3rd. However, a post-race penalty imposed on Cheah promoted Tengku Djan to the top step.

“There was tremendous pressure going into tonight’s finale with so much being at stake, but I told myself that I needed to run a smart race,” said Tengku Djan Ley, who sealed his 3rd Super Sporting Class overall title and a prize of RM70,000.

“It has been both an incredibly challenging and rewarding season. I started the first 2 races of the year very well with back-to-back victories but the following 2 races did not turn out favorably and as a result we lost a lot of valuable points. A 3d place finish in Race 1 yesterday and a race win tonight gave us the result that we needed. I would like to take this opportunity to thank not only my team and sponsors, but also to commend everyone in the Super Sporting Class for a very hard fought season.”

There was plenty of drama with the amateur racers with no less than 6 cars involved in skirmishes from the very first lap due to a wet track. Clement Yeo managed to make a brilliant start from 5th on the grid to stay within a car’s length of Panglima City Racing Team’s Kenneth Koh, before eventually passing him for the lead.

Behind them, the battle for 3d, 4th and 5th positions was even more intense. 23 Motor’s Ady Rahimy was the first to end up off the track, followed by Team Fokus Tetap’s Lim Chun Beng and subsequently Dato’ Ken Foo, A. Shanmuganathan, Eric Yong and Amirul Haikal.

These incidents brought out the safety car 6 laps into the 20-lap race, reducing what little gap Yeo had built over Koh. But when the racing resumed 3 laps later, all the attention shifted to Dream Chaser’s Bradley Benedict Anthony and Ady who were trading places for 3rd position.

Yeo paced himself well in the remaining 10 minutes of the race but it was once again Bradley who stole the limelight when he shot pass Koh for 2nd place. The race victory sealed Yeo’s campaign to become Season 4’s Sporting Class overall champion which comes with a prize of RM50,000.

Actors Shukri Yahaya and Zizan Razak were in the fight for the overall champion title in this category that has the most familiar faces for the general public. The 18-lap race began with Zizan taking the lead with Shukri in tow, while singer Khai Bahar tailed in 3rd spot.

Positions remained unchanged in the first 5 laps until Zizan ran wide and allowed Shukri to take the lead. Zizan also lost another place to Khai and never recovered from that mistake but held on to his 3rd place. The 2 drivers in front had an almost 10 second lead to the rest of the field.

Determined to win the overall championship now that he was competing in his 4th successive season of the Vios Challenge, Shukri had to dig deep to hold back Khai who seemed to have the quicker pace throughout the night. The pair were only separated by only 0.3 seconds when the chequered flag was raised. However, Shukri collected a penalty and relegated him to 2nd and promoted Khai to race winner. But the overall points accumulated during the season was enough for Shukri to win the overall championship title in the Promotional Class.

The first-ever Rookie Class of this racing series saw Naquib Azlan crowned overall champion. Naquib had turned out to the surprising star of the season, having participated in a saloon car race with only experience drawn from competing as a simulator racer.

“It was a dream come true. Never did I expect to enter racing in real life and to have been able to perform as well as I did. I am extremely thankful. I have to say a very big thank you to Toyota for having the trust in me and giving us the opportunity, the team, to Alex Yoong who helped all of the rookies throughout the entire journey. This is something that no other manufacturer has done and to represent Toyota is such an honor. I look forward to doing this again next season,” said Naquib.

According to UMW Toyota Motor President Ravindran K., the TOYOTA GAZOO Racing Festival and Vios Challenge aims to not only create a series that is more affordable and accessible to the racing community, especially the younger generation of drivers, but also set out to promote motorsports to the masses. 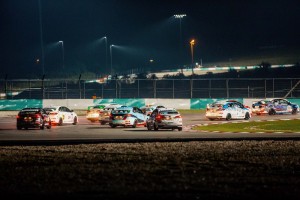 “The Vios Challenge has also become an attractive breeding ground for young racing talent due to its lower cost of entry and one-make format that is greatly centered on honing driving skills and race craft. And with 4 categories of racing, from celebrities to young drivers, and amateur gentlemen racers to elite professionals, the Vios Challenge showcases incredible talent on track for the delight of spectators. Throughout the 4 seasons, the event has successfully attracted more than 5 million spectators (both on-site and online) which I hope will contribute to growing local awareness, interest and especially greater appreciation for motorsports in Malaysia,” said Ravindran.

UMW Toyota Motor and TOYOTA GAZOO Racing Malaysia are committed to expand on these initiatives and calls on the support of all stakeholders to help bring Malaysian motorsports to a higher level.

Attending the season finale at the Sepang International Circuit was the Minister of Youth & Sports, Yang Berhormat Dato’ Seri Ahmad Faizal Bin Dato’ Azumu. He met with the young drivers in the Rookie Class and celebrities in the Promotional Class, as well as presented prizes to the overall champions. 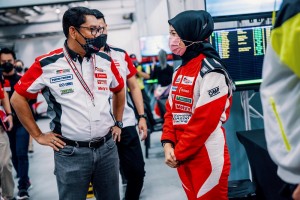 YB Dato’ Seri Ahmad Faizal had commended UMW Toyota Motor’s involvement in Malaysian motorsports, saying it amplified how corporate involvement can contribute significantly towards revitalizing and injecting greater excitement in the sport. “This is an initiative that is being done independently of any Government support or financial assistance. While UMW Toyota Motor and the brand may have its own objectives to fulfill, it has successfully been able to do so while giving so much back to Malaysian motorsports. I’m not only referring to the racing that takes place on the track, but also in terms of giving the motorsports economy a big boost because events like these create both business and employment opportunities for those in the industry.”