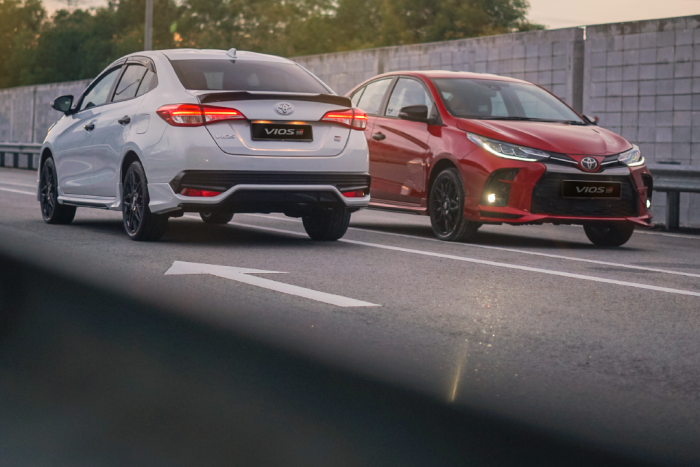 The Toyota Vios GR-S launched by UMW Toyota Sdn Bhd is more than just a sporty tribute variant dressed with cosmetic enhancements. This is the very first locally-engineered model to proudly wear the Gazoo Racing Sport badge, since the introduction of the GR Supra. Incidentally, it was launched together with the GR Yaris performance hatch. 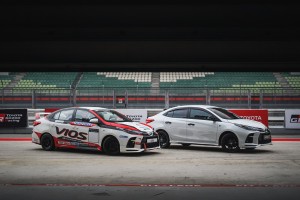 The Toyota Vios GR-S is based on the current generation Vios and tweaked not just appearance-wise but mechanically as well. UMW Toyota Motor had drawn from its experience and technical knowledge running three seasons of the Vios Challenge one-make race league to design the Vios GR-S. The Vios has also proven that it is able to withstand the punishing demands of motor racing; the Vios Challenge is run in Malaysia, Thailand and the Philippines. This is also the first-ever GR Sport model to be produced by UMW Toyota Motor Sdn Bhd at its advanced manufacturing facility in Bukit Raja, Klang.

On the exterior, the Vios GR-S bears an aggressive aerokit made up of a sculpted front bumper reminiscent to that of the GR Yaris, a rear bumper with diffuser, a blacked out boot spoiler, side skirting, as well as blacked out side mirrors. The car also projects a more powerful stance with bespoke and blacked out 17” alloy wheels shod with 205/45 R17 low profile tyres.

It is also engineered with sports-tuned suspension for improved handling and confidence at high speed, as well as comfort. While the Vios GR-S comes with a 10-speed Continuously Variable Transmission (CVT), the engine is still the 2NR-FE 1.5L DOHC with Dual VVT-i that produces 107 PS @ 6,000 rpm and 140 Nm @ 4,200 rpm.

Yes, it may be the same powerplant as the regular Vios but with the 10-speed CVT which has a sports mode, it has more gear ratios to run and promises quicker acceleration and a more spirited drive. This new configuration allows the car to be more responsive by sustaining higher RPM for better throttle response especially for overtaking and re-acceleration. You will also have paddle shifters to manually select the gears.

The interior of the Vios GR-S also sports some sportiness, with a black interior in red stitching, black suede and leather wrapped sports seats with embossed GR logo on the head rests. Further, you get a three-spoke leather steering wheel, leather gear knob, and floor carpets with embossed GR logo. Even the push start button wears a GR logo as a reminder. The meter cluster uses an Optitron panel with red needles, and GR animation on the 4.2” inch Multi-Information Display.

“This is a very special model for several reasons: it was developed locally, it was inspired by the success of the Vios Challenge, and above all it had to meet with all the criteria of what the GR brand represents before becoming truly worthy of being bestowed with a GR badge,” said UMW Toyota Motor Sdn Bhd Deputy Chairman and Gazoo Racing Malaysia Chief Motorsport Officer Akio Takeyama. 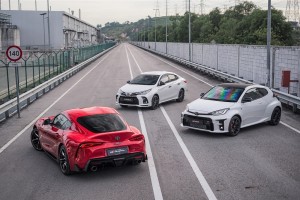 “Gazoo Racing is a global direction, one that underlines Toyota’s aspiration to push the limits via its involvement in motorsports, and this is translated into building better products and shaping the strength, capability and creativity of its workforce. This is a philosophy we embrace in our business domestically, and now with models like the Vios GR-S, GR Supra and newly-launched GR Yaris, UMW Toyota Motor has a strong product mix locally to establish an even bigger footprint in the performance car market and in Malaysian motorsports,” he added.

GR Ambassador and two-time Vios Challenge champion, Tengku Djan Ley Tengku Mahaleel added, “What Toyota has done with the Vios GR-S is to take it to another level. It is not the run-of-the-mill special edition cars produced in Malaysia that normally focuses only on body kits, wheels and tyres, and interior enhancements. The Vios GR-S was developed to incorporate the essence of Gazoo Racing with the focus on developing a car with exceptional driving pleasure at a particular price point. A lot of thought went into the developing a car that is worthy of wearing the GR badge, and for the price, you are actually getting a lot of car”.

Tengku Djan added that while the Vios GR-S is not a direct descendant of the Vios Challenge race cars, a wealth of race experience and technical knowledge have been indirectly injected into the car. “It is a shadow of the actual Vios Challenge race car. It’s a refined version of the race car. The Vios GR-S is not just about outright performance or purely handling, but more importantly, it is a car that is able to deliver great driving enjoyment and pleasure,” he said. 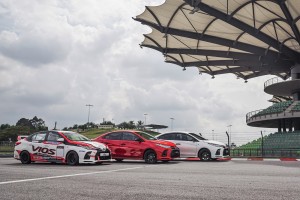 “It’s a car with a lot of character, it’s a lot more engaging, and has better steering feedback. The availability of a 10-speed CVT transmission may sound too much, but for a 1.5-litre, it allows the car to be driven at the optimum power band and keeps it spirited throughout the rpm,” he commented.

The Toyota Vios GR-S is priced at RM95,284 (on the road without insurance, valid until 31 December 2020) and is only available in two signature colours i.e. Platinum White Pearl and Red Mica Metallic. The Vios GR-S is available exclusively at all GR Garage outlets and Toyota dealers participating in the Vios Challenge.