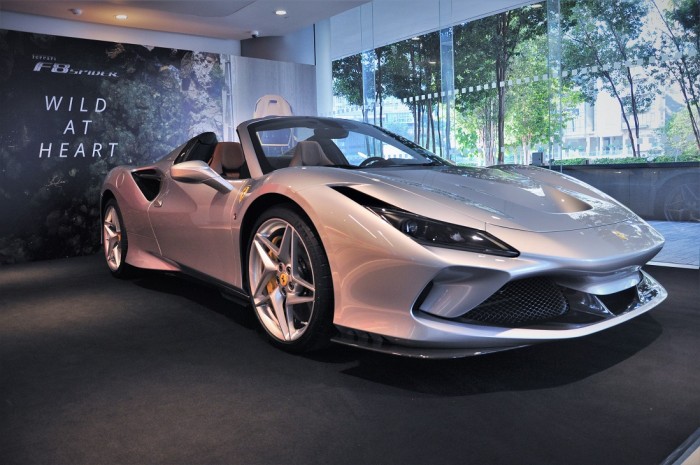 Naza Italia, official importer and distributor of the Ferrari brand in Malaysia, has made available the Ferrari F8 Spider, the brand’s latest generation of drop-top sports car. This launch also marks the F8 Spider’s debut in Southeast Asia. 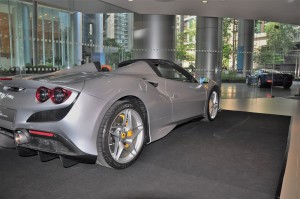 The Ferrari F8 Spider was designed in parallel with the F8 Tributo berlinetta and features the Prancing Horse’s compact and efficient RHT (Retractable Hard Top) which influences the lines of a model that leads its category. The F8 Spider is the latest addition to an exclusive and prestigious bloodline of open-top V8 cars that began with the 308 GTS in 1977. It is less extreme than the 488 Pista Spider, but sportier than the 488 Spider which it replaces.

Designed by the Ferrari Styling Centre, the F8 Spider continues with the direction of the F8 Tributo to act as a bridge to a new design language that will continue to emphasise Ferrari’s key characteristics of high performance and extreme aerodynamic efficiency. 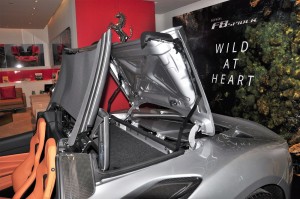 The RHT takes just 14 seconds to deploy or retract and can be closed or opened while the car is on the move up to 45 km/h. The design features a separation line above the car’s B-pillar instead of at the conventional position of the belt-line. This allows the top to be more compact and two-dimensional, and it can be divided into two parts and stowed on top of the engine. 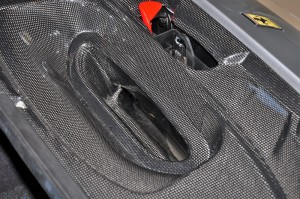 The front view of the car is characterised by the S-Duct around which the entire front end has been redesigned to highlight the extensive aerodynamic modifications made to this area of the car. The clearest example is a set of new, more compact, horizontal LED headlights. Meanwhile, the position of the front radiators are angled rearwards, unlike in the 488 Spider. This not only benefits cooling but also shrinks the underbody surface area so that it can be used to generate downforce. This calls for a redesign of the geometry of the channels used to dissipate hot air to ensure that maximum downforce is generated while reducing drag. The result is a 10% improvement in the car’s overall efficiency compared to the 488 Spider. 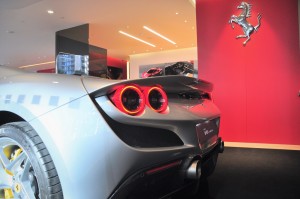 At the back, the rear spoiler has been redesigned to be larger and wrap around the tail lights. This visually lowers the car’s centre of gravity and allows a return to the classic twin light cluster and body-coloured tail, another styling cue from the early 8-cylinder berlinettas like the legendary series 308 GTB.

The engine cover of the F8 Spider is the most distinctive of its design. The manta-like look of the cover is created by a central spine that starts from the rear screen and disappears under the wing of the blown spoiler, following the air flow.

The two wing elements that emerge from the central volume are suspended creating an air vent below them which helps improve engine heat dissipation. The three sculpted strakes on the side elements of the engine cover also make their own contribution to this, in addition to referencing the iconic styling of the rear screen of the coupé version. Further, the crests that emerge from the prominent volumes of the tonneau cover fins flow into the spoiler in an interpretation of the rear wing “swan neck” pillar used in Formula One. 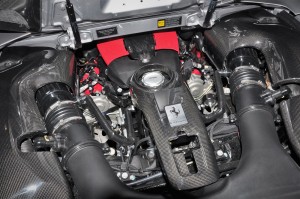 The F8 Spider uses Ferrari’s V8 engine mounted in the mid-rear section. The 3,902 cc engine produces 720 cv (710 hp) @ 8,000 rpm and and maximum torque is now higher at all engine speeds, peaking at 770 Nm @ 3,250 rpm. This power unit in particular further enhances the typical traits of all Maranello engines with smoothly progressive, limitless acceleration and zero turbo lag, combined with a unique soundtrack courtesy of a new exhaust system. 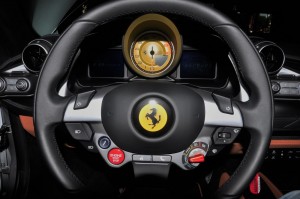 The instantaneously accessible power is matched by exceptional handling courtesy of advanced vehicle dynamics solutions. This includes a new version of the Ferrari Dynamic Enhancer (FDE+) which can now be activated in the manettino’s RACE position, a move designed to make performance on the limit easier to reach and control.

To achieve the 50 cv (49 hp) increase in power compared to the 488 Spider, the new intake line is derived directly from the 488 Challenge. In the F8 Spider, the air intakes have been moved from the flanks to the rear where they are located on either side of the blown spoiler and are directly connected to the intake plenums. This drastically reduces losses and ensures greater air flow to the engine, thereby increasing power. The air flow also benefits from increased dynamic pressure created by the shape of the rear spoiler.

The F8 Spider’s engine also inherits highly efficient weight-reduction solutions from the 488 Pista which cut the power unit’s weight by 18 kg compared to the 488 Spider. Reducing the weight of rotating and non-static masses, such as the titanium con-rods, crankshaft and flywheel, allows engine speed to rise very rapidly. These reductions in the weight of the rotating masses yield a 17% reduction in inertia.

Further, Inconel exhaust manifolds derived from the 488 Challenge contribute 9.7 kg to the lighter engine weight. The exhaust layout has been extensively modified across the board from the turbos to the tail pipes to produce a sound absolutely unique to this particular car. The result is an unmistakable engine timbre that is superior in terms of both the intensity and quality of the sound. The exhaust line also features a new Gasoline Particulate Filter (GPF) to comply with new homologation requirements.

As the car accelerates, the Adaptive Performance Launch analyses grip and then uses electronic controls to optimise the torque delivery to suit the road’s grip level thereby reducing wheel slip to a minimum which, in turn, maximises acceleration. 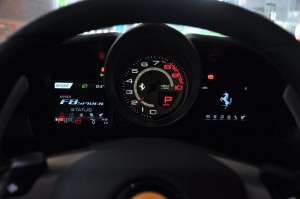 The rev limiter’s “Wall Effect” strategy is also another leap forward in terms of extreme engine performance. Rather than gradually limiting the revs towards the limit, it cuts off right at the 8,000 rpm red-line, maximising the amount of power available in power-on dynamic driving situations and consequently improving lap times.

Adopted once again on this model is the hugely successful Ferrari Variable Torque Management strategy for all gears. To adapt it to the car’s extreme sporty spirit, all of the torque curves were redesigned to deliver a feeling of consistently smooth, powerful acceleration all the way to the red line. Maximum torque is 10 Nm higher than on the 488 Spider and is available even at lower engine speeds. 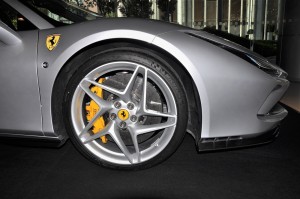 Overall performance levels are significantly higher than the 488 Spider, thanks to the increase in power, weight reduction and improved aerodynamic coefficient. This potential is also now accessible to a larger number of drivers because of the vehicle dynamics systems that makes driving on the limit a more confidence-inspiring experience. The features include a steering wheel with a smaller-diameter rim and the introduction of the new Ferrari Dynamic Enhancer Plus into the integrated Side Slip Control (SSC) concept, now in 6.1 guise.

The SSC system improves the driver’s control on the limit for an even more engaging drive. The Ferrari Dynamic Enhancer system (FDE+) now also activates in the Race position of the manettino. The FDE is a lateral dynamics control system that uses Ferrari software to adjust the brake pressure at the calipers. It debuted on the 488 Pista and was later adopted on the 488 Pista Spider. The F8 Tributo then featured the new FDE+ version with extended functionality which is now also being used on the F8 Spider.

The control system, which is operational through and exiting corners (but not under braking), now also extends to low grip conditions and to the Race setting of the manettino.

Sitting in the car, the F8 Spider’s cockpit has the classic, driver-oriented look typical of Ferrari’s mid-rear-engined berlinettas. Like its F1 cousin, all controls are mounted on a new generation steering wheel. Also new are the sporty seats. 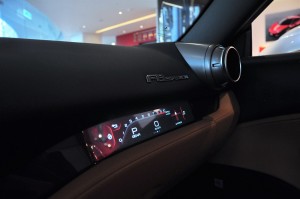 Meanwhile, the dash incorporates an aluminium sail panel supporting the central satellite and continuing into the dash itself, with a horizontal sliver of carbon fibre dividing the dash. This section also incorporates the optional 7” touchscreen passenger-side display and the dash is completed by the classic instrument cluster with its central rev-counter.

The tunnel is clearly separated from the dash and set beneath it to enhance the sensation of lightness. It features a new bridge, a prominent sculptural creation that seems to float and thus further streamlines the cabin.

The Ferrari F8 Spider comes with the extended seven-year maintenance programme that is also available across the entire Ferrari range. This programme covers all regular maintenance for the first seven years of the car’s life. The scheduled maintenance is an exclusive service that allows clients the certainty that their car is being kept at peak performance and safety over the years. This very special service is also available to owners buying pre-owned Ferraris.

Regular maintenance (at intervals of either 20,000 km or once a year with no mileage restrictions), original spares and meticulous checks by staff trained directly at the Ferrari Training Centre in Maranello using the most modern diagnostic tools are just some of the advantages of the Genuine Maintenance Programme.

The service is available on all markets worldwide and from all Dealerships in the Official Dealership Network.

The Genuine Maintenance programme further extends the range of after-sales services offered by Ferrari to satisfy clients wishing to preserve the performance and excellence that are the signatures of all cars built at the factory in Maranello which has always been synonymous with leading-edge technology and sportiness.

The Ferrari F8 Spider comes with a base price of RM1,178,000 (before duties, customisation options, taxes and insurance) and is available for private viewing in Malaysia from now until 31 May 2020. To make an appointment or for further details, please contact the Ferrari Malaysia Showroom.