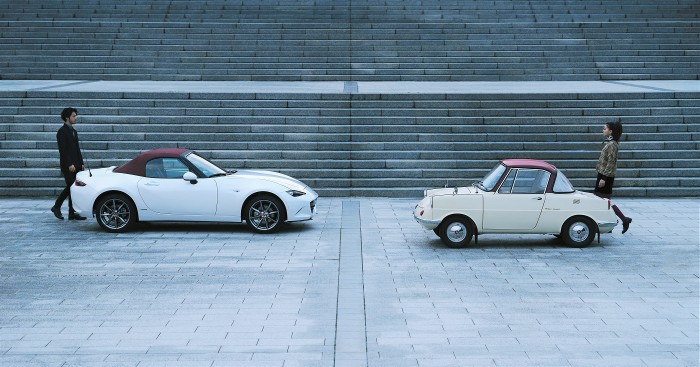 Mazda is celebrating its 100th anniversary this year. The Japanese automaker famed for its ‘Zoom Zoom’ and ‘Jinba Ittai’ philosophy hit the century mark in January. What started as a business of producing cork in Hiroshima turned into a visionary automotive player with innovative and stylish products. The founder, Jujiro Matsuda, had envisioned the concept of a passenger vehicle to help create an era in which people could lead rich and fulfilling lives; thus marking the beginning of Mazda’s “never-stop challenging” history. 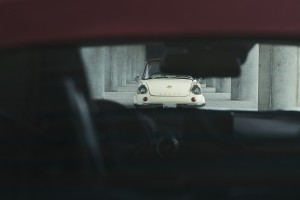 Following Jujiro Matsuda’s line of thought, the company designed its first passenger vehicle using only top-of-the-range technology at the time. The result was the R360 Coupe, which was created in 1960 and became the starting point of Mazda’s car-making era.

In celebration of its 100th anniversary, Mazda has prepared special edition models that are reminiscent of the R360 Coupe, with its white and burgundy two-tone colour scheme and, and a special 100th Anniversary logo. 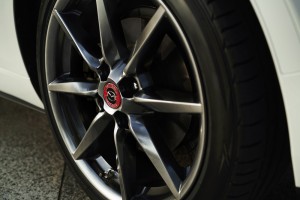 The 100th Anniversary Special Edition models reflect Mazda’s history of taking on challenges and act as a reminder of its car-making roots by adopting a similar motif in red and white. The 100th Anniversary Special Edition series is designed to express gratitude to the millions of people who have had dealings with Mazda over the years and a pledge that though it may aim for the stars, the company will never forget its roots in the car-making business.

Inside, the floor carpet, floor mats and seats use the same rich burgundy that was introduced with the Mazda3. Further, the hubcaps feature the same design as the 100th Anniversary Special Logo, an expression of the company’s desire to celebrate its 100th anniversary together with its customers. Additionally, the key fob, headrests and other parts are decorated with a special logo. The vehicle body is also adorned with a commemorative badge for that special look and feel.

The R360 Coupe was Mazda’s first passenger vehicle. The company had its sights set on becoming a full-line automaker, and its first undertaking made a memorable splash with a futuristic design and unique technologies. Developed with extraordinary passion, the car was designed for people who wanted to fulfill their dream of owning their own car. 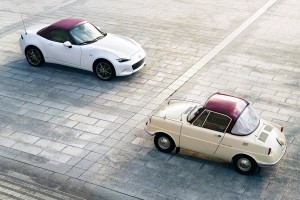 Symbolizing that intention was a four-cycle engine—unprecedented among micro-mini passenger cars of the time—and an automatic transmission that made driving easy. Also noteworthy were the extensive weight-reduction efforts aimed at making the R360 Coupe nimble on the road. The powertrain used a good deal of light alloy materials, and the body adopted a monocoque construction. A distinctive and stylish coupe form also contributed significantly to the weight savings. These factors combined to provide—at an astonishingly affordable price—driving performance that eclipsed the era’s preceding micro-mini passenger cars. The R360 Coupe became an epoch-making car that accelerated the motorization of Japanese society and, to this day, stands as the starting point of Mazda’s vehicle production.

The passion for designing and innovating still burns strong within Mazda today. This is evident from its Kodo design concept, to its ‘Jinba Ittai’ driving connection and its Skyactiv range of technologies.