UMW Toyota Motor is following the government’s orders to minimise the potential exposure to COVID-19 by temporarily closing its Toyota and Lexus centres as well as production facility. The final round of the Toyota Gazoo Racing Festival is also cancelled.

“In support and compliance with the direction by the Government’s announcement on “Movement Control Order” on 16 March, UMW Toyota has announced that all Authorised Toyota and Lexus Dealers will temporarily cease its usual day-to-day operations but remain contactable to all customers effective 18 March through the end of the month.

Mr. Ravindran K, President, said “The safety of our employees, our stakeholders and all of our customers is paramount to us. Based on direction from the government, despite the shutdown of our operations, we will continue to be available to our customers for any assistance they may require with regard to their Toyota and Lexus vehicles.”

Assembly Services Sdn. Bhd.’s manufacturing operations will also be suspended from 18 March onwards. At the moment, there are no plans for any specific manufacturing suspension outside Malaysia, resulting from the situation in Malaysia. 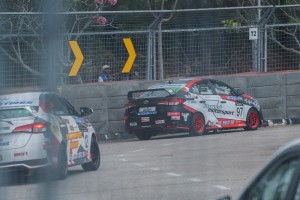 Also in compliance with the Government’s measures to contain any further transmission of the COVID-19 pandemic, UMW Toyota Motor has decided that the fourth and final round of Season 3’s Toyota Gazoo Racing Festival and Toyota Vios Challenge Championship scheduled to take place on 18 – 19 April 2020 at the Sepang International Circuit will be cancelled. Prior to the Government’s announcement, the Championship was scheduled to proceed as a closed-door event.

“We are closely monitoring the situation and for the protection and safety of our staff and customers kept in mind, we will consider and make decisions guided by the direction from the Government,” said Akio Takeyama, Deputy Chairman.