Isuzu Malaysia has formed a team to participate in the Kuching Marathon 2019 on 18 August and hopes to raise funds for local Kuching charity organisations. The team aims to raise RM17,000 for Hope Place Kuching, which distributes basic food aid and daily necessities to the underprivileged, as well as Persatuan OKU Kuching, which provides vocational training to underprivileged and disabled youth. 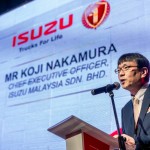 “When the idea was floated in the office for us to run in the Kuching Marathon as a means of raising funds for charity, everyone unanimously agreed without hesitation. We are all eager to participate and do our part to raise funds for the local charities. I hope to be able to complete the 10km that I have entered for,” remarked Nakamura.

The Kuching Marathon is one of the largest mass-participation sporting events in the island of Borneo with over 11,000 participants expected this year. For the upcoming Kuching Marathon 2019, Isuzu is also the event’s main sponsor.

As Malaysia’s No. 1 truck company with the most popular light-duty truck line, Isuzu will also be playing a supporting role in the event with the efficient Isuzu D-Max as the lead car for the run as well as the main ferry vehicle for key officials and members of the media during the event.