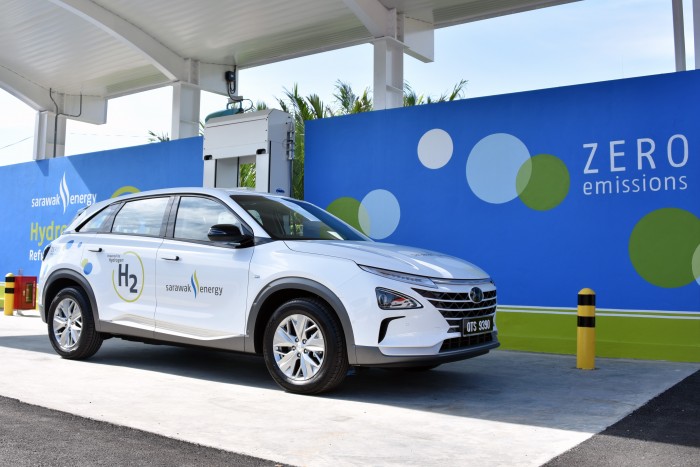 Energy provider, Sarawak Energy Bhd, has purchased two Hyundai NEXO vehicles for a pilot project. The Hyundai NEXO is the flagship hydrogen fuel cell-powered crossover from the Hyundai Motor Company (HMC). The two units of NEXO will be used by Sarawak Energy in trials for its pilot hydrogen production plant and refueling station project in Kuching. 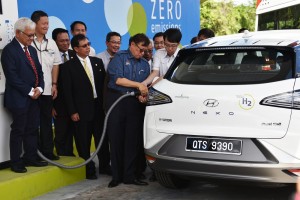 Sarawak Energy is already providing energy, predominantly from hydropower, to the state’s 2.8 million users. This project is Sarawak Energy’s initiative to study the viability of using fuel cells, especially hydrogen, to power the states’s transportation sector. The refueling station in Kuching will be the first of its kind dedicated for transportation in Southeast Asia.

Subsequent to the delivery of the two NEXOs in early May, HMC and Hyundai-Sime Darby Motors (HSDM) are considering establishing plans to distribute Hyundai’s hydrogen fuel cell-powered SUV in the Southeast Asia region. 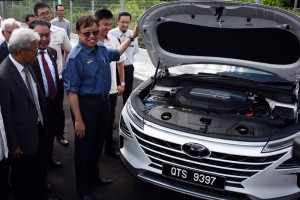 The Hyundai NEXO leads HMC’s plans in zero-emission vehicles development. The NEXO’s electric powertrain bears the latest in fuel cell technology, with improved performance over its ix35 Fuel Cell predecessor. The NEXO has an electric motor which produces 163 PS that draws power from an under-bonnet fuel cell stack, which combines oxygen from the surrounding air with hydrogen from its high-pressure storage tanks. This mixing results in electricity to power the motor and charge the battery, and water vapour, which exits through the exhaust. On full tanks of hydrogen, the NEXO is capable of 666 km, under the new Worldwide Harmonised Light Vehicle Test Procedure (WLTP), before needing to refuel, which takes only a few minutes.

Besides the environmentally-friendly powertrain, the NEXO also has an advanced air purification system which filters 99.9% of very fine dust (PM2.5); the amount of air purified is shown on the car display panel.

NEXO has also been independently awarded the UL Bio Environmental Seal for the use of bio-fibres from sugar cane waste and vegetable plasticisers in the headliner and carpet areas; bio-plastics from sugar cane and corn waste in door, seat, pillar and console trims; and bio-paint extracted from rapeseed and soybean oils for the dashboard and centre console.

Demand for eco-friendly vehicles has been growing, aided by policies of various governments to reduce pollution and environmental impact. According to HMC, the NEXO, which was recently named ‘the game changer’ at the Auto Car Awards in the UK, has great potential in the Southeast Asia eco car marketplace.