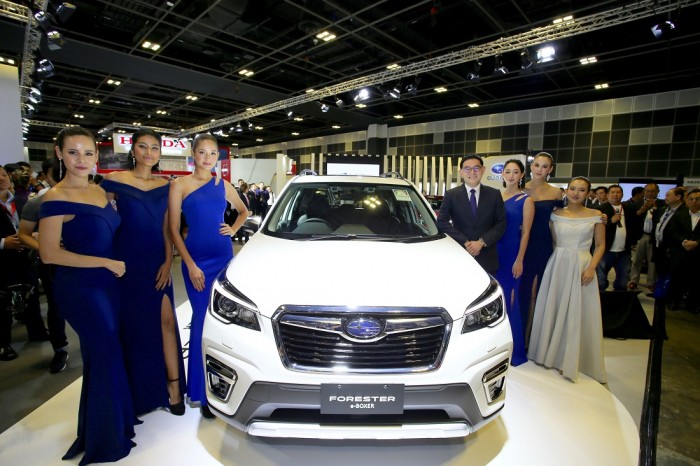 The all-new Subaru Forester e-Boxer hybrid is on preview at the 2019 Singapore Motor Show which officially opened today, 10 January (Thursday). This isn’t the brand’s first hybrid however, as it previously had a hybrid version of the previous-generation XV / Crosstrek that was available in limited markets.

Built on the Subaru Global Platform (SGP), that is designed from the start to accomodate conventional, hybrid, plug-in hybrid and fully electric powertrains, the new Forester e-Boxer gets its power from a revised FB20 2.0L direct injection boxer engine and an AC synchronous electric motor. 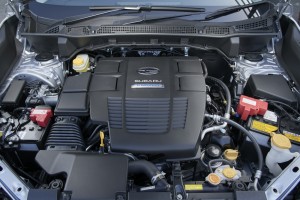 The FB20 petrol engine has a power output of 143 hp and 188 Nm of torque while the electric motor adds 13.4 hp and 65 Nm of torque. Power to all four wheels (it still comes with Symmetrical All-Wheel Drive) is still via the Lineatronic CVT, which is sandwiched between the boxer engine and electric motor. The electric motor gets its juice from a lithium-ion battery pack located in the rear cargo space; you still get over 500 litres of space but miss out on a spare wheel). The battery is recharged by converting kinetic and braking energy.

This set-up enables the Forester e-Boxer to start off at low speeds with the electric motor, before the petrol engine fires up at higher speeds. The combined power output of the e-Boxer hybrid is said to surpass that of the newly revised US-spec Forester 2.5L petrol model in terms of acceleration. The US-spec Forester is rated at 182 hp and 239 Nm.

Subaru also claims the Forester e-Boxer has an average fuel consumption of 5.4 litres per 100 km (JC08 test cycle), which is about 40% better than the outgoing petrol-only Forester.

The Forester e-Boxer previewed is equipped with the EyeSight advanced driver assist system that utilises stereo cameras for such driving aids as adaptive cruise control, lane departure warning, lane keep, pre-collision braking and throttle management. In addition, it has Subaru’s new DriverFocus software which uses facial recognition to identify the drivers and their conditions. It can be set to recognise up to five people and their personal preferences for seat position, temperature, radio station etc. The system detects driver fatigue or distraction and works with EyeSight to alert the driver or take action to avoid accidents. 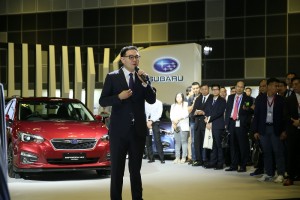 “The showcase of the new Forester e-Boxer offers our customers impressive efficiency and fuel economy with its dual electric-petrol engines, while still retaining the trademark comfort, handling and safety that the Forester is known and loved for,” said Mr Glenn Tan, Deputy Chairman and Managing Director, Tan Chong International Limited. “The Forester e-Boxer offers our customers the choice of a vehicle that marries environmental awareness with performance, and we are thrilled to introduce this variant to the market.”

For Malaysia, the new Subaru Forester can be expected some time in the first half of 2019. We won’t be getting the e-Boxer hybrid version though, but the EyeSight feature is a given.